This Easter, City Harvest Church’s senior pastor, Kong Hee shared about the five redeeming victories of the Cross and its significance to Christians. Easter was celebrated a little differently this year, as with almost everything this COVID-19 season. On the weekend of Apr 11 and 12, City Harvest Church gathered online to celebrate Easter through its streamed service.

It began with a heartwarming video featuring several families’ testimonies on how the various ministries in the church have blessed them. These members spoke candidly about how the current stay-home measures have affected their lives and the way they worship, and how they have adjusted to it. A number of zone supervisors and pastors also shared how they were finding new ways to connect with their members through the Internet. Xanthe Chua, a nursing professional on the COVID frontlines and a member of CHC shared how her cell group has supported her through this challenging season. 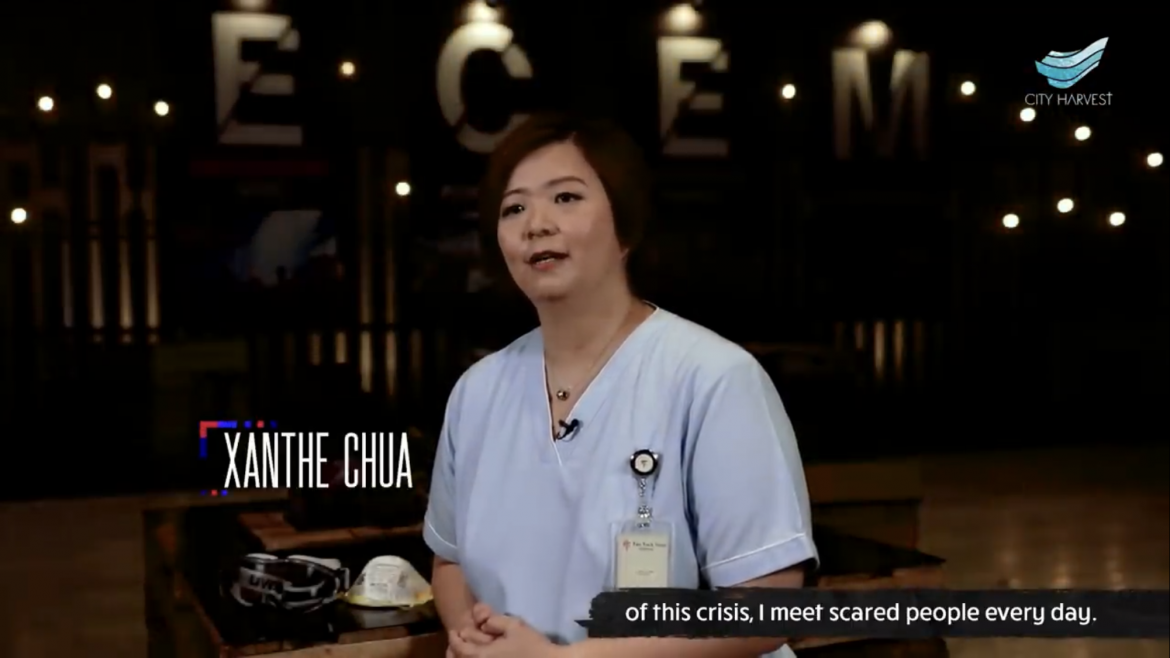 Praise and worship came in the form of a very intimate session led by executive pastor, Sun Ho and a team of three. CHC members had been reminded to prepare communion elements before the service, and multiple cell groups met up over Zoom to partake of this significant act of holy communion together, taking the cue from their senior leaders, Pastor Kong Hee and Pastor Sun.

JESUS’ WORK ON THE CROSS
“Every Easter, we focus on the cross. Because it speaks powerfully of the victory of Christ,” Pastor Kong said as he began his Easter sermon, recorded in his home. Jesus gained the victory, not only from sin and guilt but also from Satan and his evil powers.

Reading from Colossians 2:13, Pastor Kong taught that Jesus did two things on the cross. Firstly, God forgave the sins of mankind: “He (Jesus) freed us from our moral and spiritual bankruptcy by paying all our debts on the Cross!”

Secondly, God in Christ defeated the kingdom of darkness: “On the cross, there was a great cosmic battle. The powers of darkness attacked Jesus but He totally defeated them.”

Pastor Kong went on to make a series of parallels between what had already happened and what had not yet taken place. He taught that the resurrection confirmed Jesus’ victory over death, and that “God raised us up with Christ and seated us with Him in the heavenly realms in Christ Jesus” (Eph 2:6), but Satan has not conceded defeat. 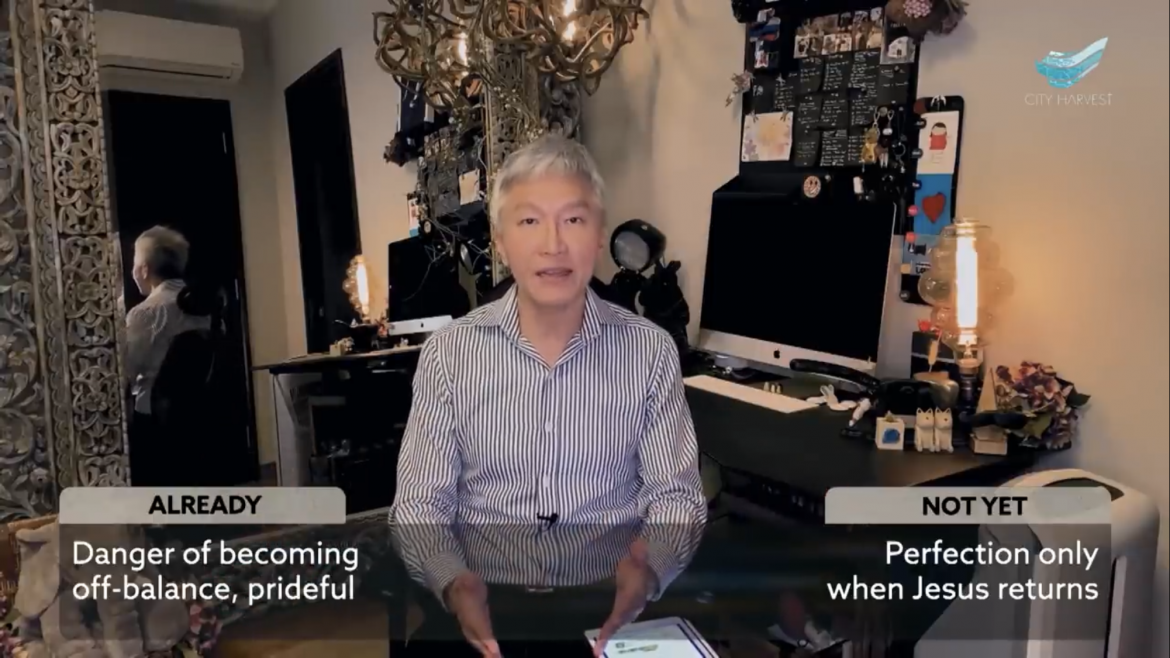 “On the one hand, Paul says that we are reigning with Christ with all the principalities under Jesus’ feet and our feet. On the other hand, we are warned that these same demonic forces will come against us,” posed the pastor, quoting Ephesians 6.

There is now a tension between what is already and what is not yet. Pastor Kong cautioned that if one were to over-emphasize what’s already, he would become off-balanced and prideful, thinking is already holy and perfect in every way, impervious to sickness and challenges. 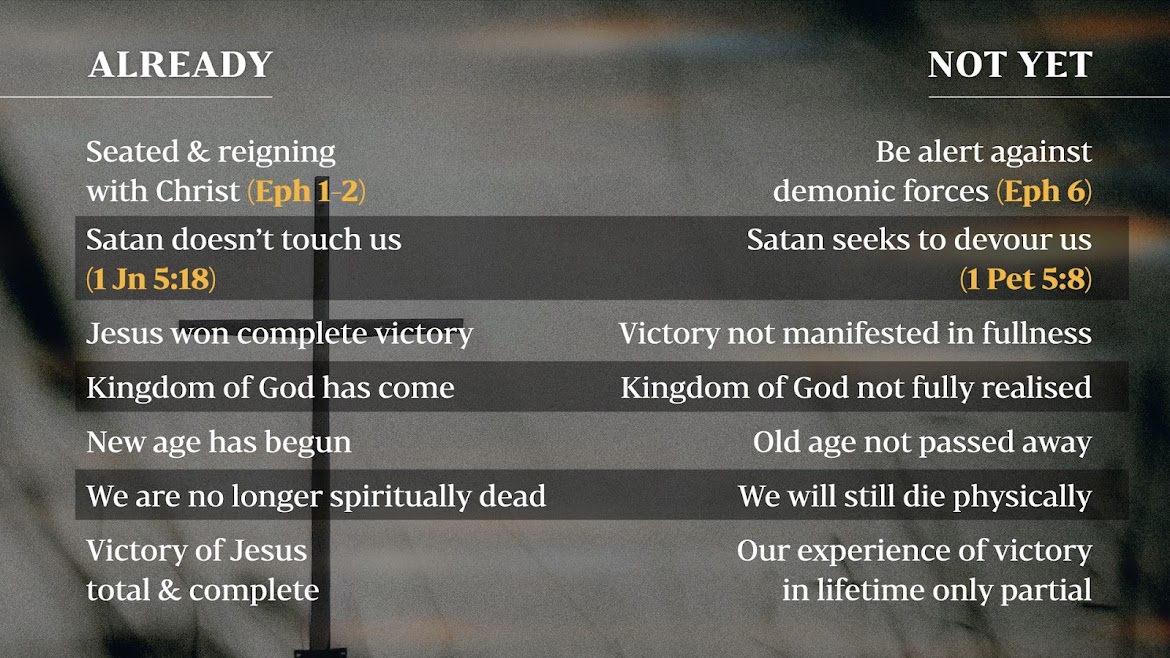 “But perfection only comes when Jesus returns in glory at the end of time, and that has not yet happened,” explained the pastor.

But if one were to over-emphasize what is not yet, he will live a defeated life, accepting anything that the devil throws at him.

“Let us be very clear,” stated Pastor Kong. “The victory of Jesus on the cross is total and complete. It is a decisive and resounding victory over Satan!”

He went on to say, “Jesus’ victory is total and complete, but our experience of this victory in this lifetime is only partial.” Hebrews 2:14 reads, “that through death He might destroy him who had the power of death, that is, the devil.” The Greek word for “destroy” is katageo, which means to make something ineffective or powerless. In other words, Satan and his demons have not completely gone away, but their powers have been broken. 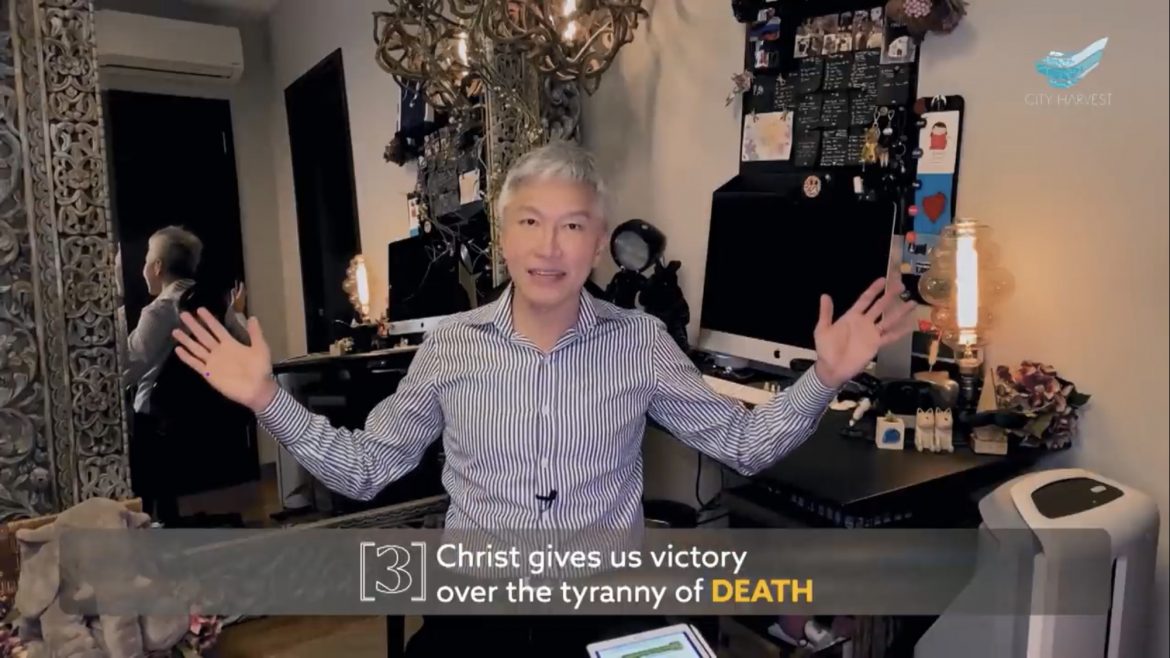 Christ gives us victory over the tyranny of the flesh. Drawing from Romans 6:6, Pastor Kong explained that the “flesh” refers to the old man and the body of sin. “When we live a fleshly life, we are ‘enslaved by all kinds of passions and pleasures. We lived in malice and envy, being hated and hating one another’ (Tit 3:3).”

He continued, “But on the cross, the power of the flesh is ‘destroyed’. Not that it ceases to exist, but it is rendered powerless—we don’t have to be enslaved by it anymore!”

Christ gives us victory over the tyranny of the world. In Galatians 6:14, the word “world” refers to the godless values of human society. 1 John 2:16 describes the things the world loves which is the total opposite of what God loves: “the lust of the flesh, the lust of the eyes, and the pride of the life”.

Pastor Kong then encouraged the congregation through 1 John 5:4, that “whatever is born of God overcomes the world”. When a Christian believes in Jesus, his values change and he would want to live like God, obey Him and do His will.

Christ gives us victory over the tyranny of death. The fear of death is universal because the sting of death is sin—with death comes eternal judgment. The Cross has released those who are fearful of death (Heb 2:14). Through the Cross, Christians can boldly declare 1 Corinthians 15:55-57, “O Death, where is your sting? O Hades, where is your victory? The sting of death is sin, and the strength of sin is the law. But thanks be to God, who gives us the victory through our Lord Jesus Christ.”

Christ gives us victory over the tyranny of sickness. Isaiah 53:4-5 reads, “Surely He has borne our griefs and carried our sorrows…and by His stripes we are healed.” Pastor Kong explained that “griefs” here referred to sicknesses and disease, while “sorrows” referred to physical pains. The word “healed” in Hebrew is rapha, the same word as in Jehovah Rapha or “God our Healer”.

The pastor then cross-referenced the verse with Matthew 8:16-17, where Jesus had healed a demon-possessed man and explained that it was to fulfil Isaiah’s prophecy in Isaiah 53:4.

He went on to share the testimony of a CHC members Kelvin and Anne. Kelvin was diagnosed with stage 3 nose cancer in 2016. When Pastor Kong saw him last September, his condition had worsened—he had terminal cancer and the previous round of chemotherapy had failed him. He prayed with Kelvin for the final round of chemo and radiotherapy to work, even though chances did not seem high. 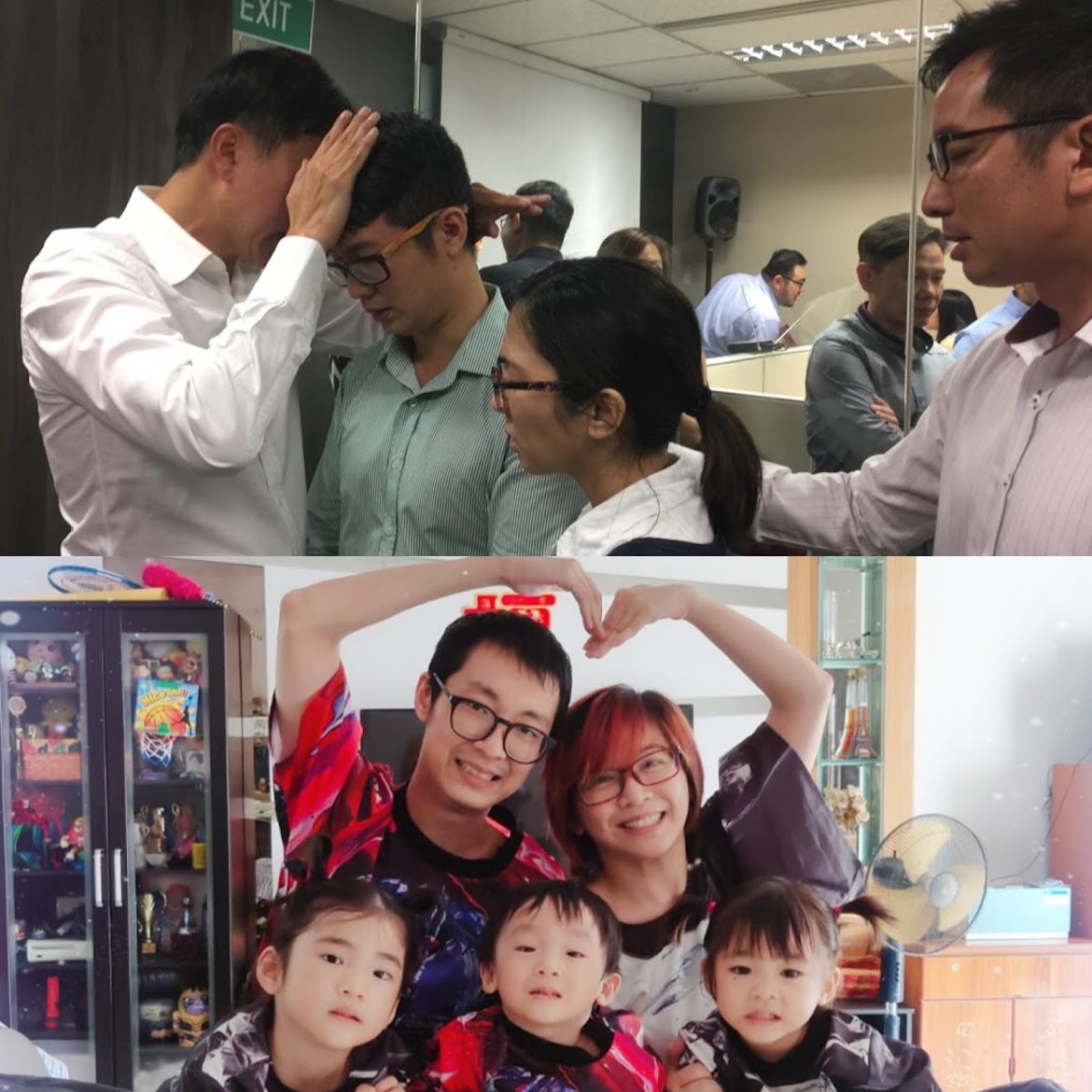 Today, Kelvin is healthy and well. His latest CT and PET scans, taken in February this  year, showed that there is no more cancer in his body.

“When we are sick, or our health is weak, God wants us to resist the devil in Jesus’ name!” Pastor Kong declared.

Christ gives us victory over the tyranny of poverty. Jesus on the Cross was in abject poverty so that Christians might be blessed in this life (2 Cor 8:9).

Pastor Kong reminded those who are struggling financially because of the COVID-19 situation that God is Jehovah Jireh, our Provider, and El-Shaddai, God of “more than enough”.

“If God can raise Jesus from the dead, He can raise your business and career from the dead,” the pastor said. “He will bless you even when you go through a COVID-19 crisis! Only believe. Just trust and obey!”

At the end of the service, Pastor Kong prayed for those who need a miracle from God and those who are struggling with guilt, temptations, fear of death, failure and financial need.

“Two thousand years ago, Jesus died on the Cross for our victory and freedom!” he declared.