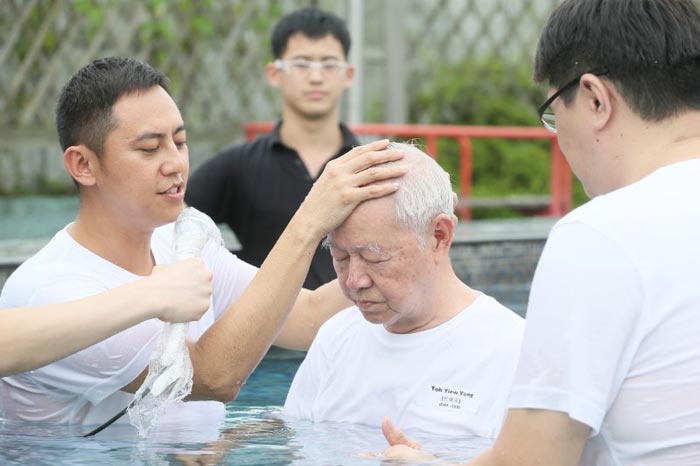 The sweltering heat did not dampen the excitement in the air as families and friends gathered at the rooftop of City Harvest Church’s Jurong West church to witness church members getting water baptized. About 100 were baptized over two water baptism services  on Jun 22.

It was heartwarming to watch CHC pastor Tan Ye Peng baptize his son Samuel Tan, as the crowd cheered exuberantly. Joseph Ang, the pastor for the next water baptism service later that day, baptized his father-in-law.

Friends and family members of E135, a cell group in executive pastor Aries Zulkarnain’s zone, gathered excitedly to witness 12 members, aged between 12 and 19, being baptized.

Among these newly baptized members, 10 of them had parents who are also in CHC and some of these parents grew up in the church.

A third generation believer, Emiko Ong, 13, decided to get water baptized after joining a cell group this year. To the Ongs, Emiko’s baptism is a significant day. Her father, Martin Ong, 41, is a businessman who has been attending CHC since 1998.

“My parents are also Christians in CHC, so that makes three generations of Christians in our family,” he told City News. “The Bible says that when one is saved, the entire household will be saved. I always believe that the blessings of God will be passed down from one generation to another.”

For Joshua Ho, 13, water baptism is an act to mark the start of his new and exciting life in Christ. The son of Calvin Ho, 41, a worship leader in CHC who has been in church since 1993, Joshua spent his growing up years as an active member in CHC’s children’s church.

Joshua’s personal decision to get water baptized was out of his desire to draw closer to God. “I feel inspired when I see my Dad serving in church. He is a great example. I try to follow him but I also want to make God my own–to have my own personal encounters with God. Just as how God is real to my Dad, I want God to be real to me as well.” Ed Ong and his wife Teo Hsin Yi, both 41, were glad and proud to see their 12-year-old daughter Ong Min go through water baptism. A member of CHC since the ‘90s, Ed believes that it is important for parents to encourage their children to make their own decisions concerning their children’s spiritual walk with God. “Min made the decision by herself to get water baptized,” he shared. “Hsin Yi and I have never really pressured her in her spiritual growth and academics. As a parent, I’m happy not just proud that she has grown up to be someone who makes decisions for herself. I think that is what matters; not so much what she can achieve.”

To 13-year-old Jolene Lam and her parents, water baptism is one of the defining moments for a Christian, after receiving salvation and baptism in the Holy Spirit. The transition from children’s church to joining a cell group and attending the adult English service was pivotal in Jolene’s decision to get water baptized. “I’ve been a Christian for a long time, but I only joined a cell group last year. I thought it was a good time to get water baptized as I’ve grown a lot spiritually since joining a cell group,” she said.

Her father, John Lam, has been in CHC for 25 years. Recollecting his own personal experience, the 46-year-old general manager shared that his decision to get water baptized was met with parental objection and opposition as he came from a non-Christian family. “When I saw my own daughter get water baptized today, it struck a chord in my heart. It is a memorable event,” he said.

Indeed, it is inspiring to see parents and their children growing and serving in the House of the Lord together, a testimony of God’s faithfulness through the generations. Truly, as the Bible says in Joshua 24:15, “As for me and my house, we will serve the Lord.”

THE SIGNIFICANCE OF WATER BAPTISM In water baptism, believers declare that they are a new creation in Christ, freed and no longer slaves to sin. The Bible says in Mark 16:16, “He who believes and is baptized will be saved, but he who does not believe will be condemned.”

Symbolically, water baptism is a beautiful picture for all born-again believers to identify with the death (Rom 6:6-7), burial (Rom 6:3-4), resurrection (Rom 6:4-5) and ascension (Eph 2:6) of the Lord Jesus Christ. Water baptism is a public outward declaration of one’s personal inward faith in Jesus Christ. It is also an important act of obedience to the command of Jesus as stated in the Great Commission.

The water baptism service starts with an anointed time of praise and worship before the water baptism candidates were led to make a series of declaration, including reciting the Apostles’ Creed in unison.

Finally, the baptism pastor steps into the pool and one by one, the candidates would enter the pool. They are immersed into the water—symbolizing death to one’s old self—and raised up again—symbolizing resurrection.