“I Want To Belong Solely To God”: Alison Chan’s 10-Year Journey To Baptism

Water baptism is a significant personal milestone for every believer. Not every new believer has a simple and straightforward progression from salvation to being water baptised, but as CHC member Alison Chan shares, God is faithful to finish what He starts.

Alison Chan, 59, first came to CHC at Christmas 2011—she was invited by her son Jordan, who was a youth in the church. However, as Jordan was seated with his youth cell group, she sat with another adult cell group leader. At that first service, Alison responded to the altar call and received salvation.

However, although she was saved so many years ago, it took Alison 10 years to make the decision to be water baptised.

“My husband was and is still not yet a believer,” she explains. “He never stopped Jordan and I from attending church, but because he was my spouse, his opinion mattered to me. I had to convince a lot of people in order to move forward with water baptism. But because I had waited 10 years, I was sure that my decision was not based on impulse. Over a weekend lunch, I first told my daughter about my decision to be water baptised. My husband was there listening, but he didn’t respond. I was relieved because I didn’t want him to say no!” In fact, every year since her salvation, her cell group leader would encourage her to sign up for water baptism. But after the first few years of facing resistance at home, Alison told herself she did not need to go through it.

“I felt as long as I was a believer, it’s okay. My salvation was assured,” she admits. “Then someone gave me the example of dating for a long time. She said, ‘Why would you want to get married? Just stay together! No one can stop you!’”

The lack of commitment mirrored by her situation struck Alison, and she decided she had to go for water baptism.

She adds, “This is what I had always known about water baptism: the reason we get water baptised is to live a new life in Christ. We want to be ‘clean’ in Christ. I understood baptism to be like me professing my love and commitment to the man I wanted to marry through a marriage ceremony.”

Finally, in 2021, the timing was right for this ceremony. “God was the One that gave me a push. I felt Him say ‘You are ready.’”

A LONG AND WINDING ROAD

Coming from a traditional Chinese family that observes another religion, Alison’s journey as a Christian has not been easy. She struggled with feeling like she was abandoning her family and their long-held traditions, and that she was being disloyal and lacked filial piety.

But what won her to Christ was seeing how He had worked in her son.

“When he was young, Jordan was rebellious. When he was a young teenager he would fight with me and his father. I confided in a close friend about it, and she would bring him to various churches with her,” she shares. “Suddenly one day he told me to drop him off at Dover Road so that he could attend City Harvest Church in Jurong West with his secondary school mate.” 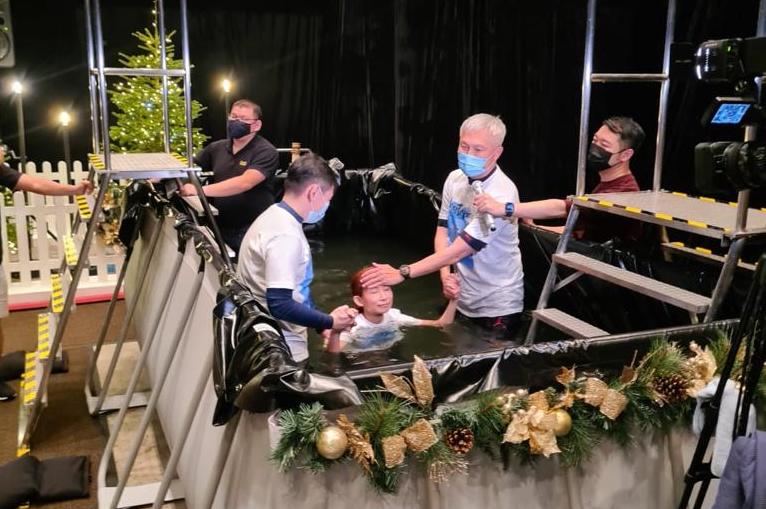 Alison decided to be her son’s chauffeur so that she could keep track of where he was and what he was doing. As time passed, she began to see the change in Jordan.

“I wanted to know his movements, and observe his behaviour, that’s why I drove him around. If he did change, I wanted to see it,” she remembers. What she witnessed was a young man transformed by the Lord—the fruit of the Spirit became more and more apparent in him, so much that he no longer lost his temper as easily, and he began showing care and concern for his family.

Jordan would invite his mother to service, and she would demur. Until Christmas 2011, when she decided to attend the Christmas service. “When I sat there, I felt I could learn from the preaching. That’s what kept me going back to CHC,” she says.

Initially she simply attended church by herself, content to listen to the message week after week. Her friends would ask her if she was doing it to please her son, but she felt she was learning things of value. Eventually, after some persuasion, she began to attend cell group, and through the years, grew in her faith through Bible study and spending time in fellowship with her cell group friends.

A few years after her conversion, Alison went through a very difficult time in her life where she faced two unexpected legal issues that seemed impossible to overcome. This was when she began pressing into God’s word, reading her Bible daily, confessing Scripture with her mouth and mind until the peace of the Lord came upon her.

Every difficulty she faced, she learned to entrust to God. Every small victory she encountered, she gave glory to the Lord. As her relationship with Him grew, Alison began to feel the conviction that she had to give God her all.

With the encouragement of her cell group leader in 2021, Alison chose to finally be water baptised. She recalls, “I prayed to God. I told Him I am weak and I want His strength to be revealed through me. “

From the moment she took the step to say yes to water baptism, God began moving in her and her family. Alison found she had the ability to exercise certain fruits of the Spirit. Alison (centre, in black) with her cell group

“Since I was water baptised, my husband seems to be more patient, perhaps because something changed in me as well—I now have zero anger towards him,” she says. “I don’t know where that patience comes from, I believe it can only be God. Now, I can feel my husband’s support more than ever before. It used to be that when I was praying, he would make fun of me. Now, when I pray, he would leave the room quietly to give me privacy. Now he also talks more with me about what’s going on in his life.”

After her baptism, a situation in their family, where family members were not speaking to one another, was also resolved. God made the hearts of the family members tender towards each other, and now there is peace in the household.

“My brother collapsed in front of me one day,” she says. “He had a heart attack in November 2021. I remember it clearly because that day, Jordan had taken my car when my brother called and said he was having difficulty breathing. I took a long time to get a Grab, and when I got there, my brother called out my name, and then he collapsed.”

Alison called for the ambulance, and performed CPR on her brother while waiting for the paramedics to arrive to bring him to hospital. By God’s grace, he survived.

“I met my brother after he was discharged, and I led him to say a prayer for salvation,” she shares. “For such a stubborn guy to admit he is a sinner and to give his life to Someone, I know it’s God that moved his heart.”

Acts 16:31 promises that when one is saved, the entire family shall be saved. Alison’s story is still ongoing, but it already bears testimony to the truth of this verse.

Alison adds, “If someone reading this is wondering if he or she should be water baptised, I would ask this person ‘Do you really want to be solely God’s?’ Because for me, I want it so much! Water baptism is a very personal decision, we are not doing it for the world. So, make the right decision.”

CHC will be holding water baptism services on the weekend of 17 and 18 December. To register, speak to your cell group leader or click on https://www.chc.org.sg/baptism2022/ to find out more.