Each Easter, we hear the name “Via Dolorosa” in songs and in dramas, but what do we know about this route that Jesus took to the place of His crucifixion? 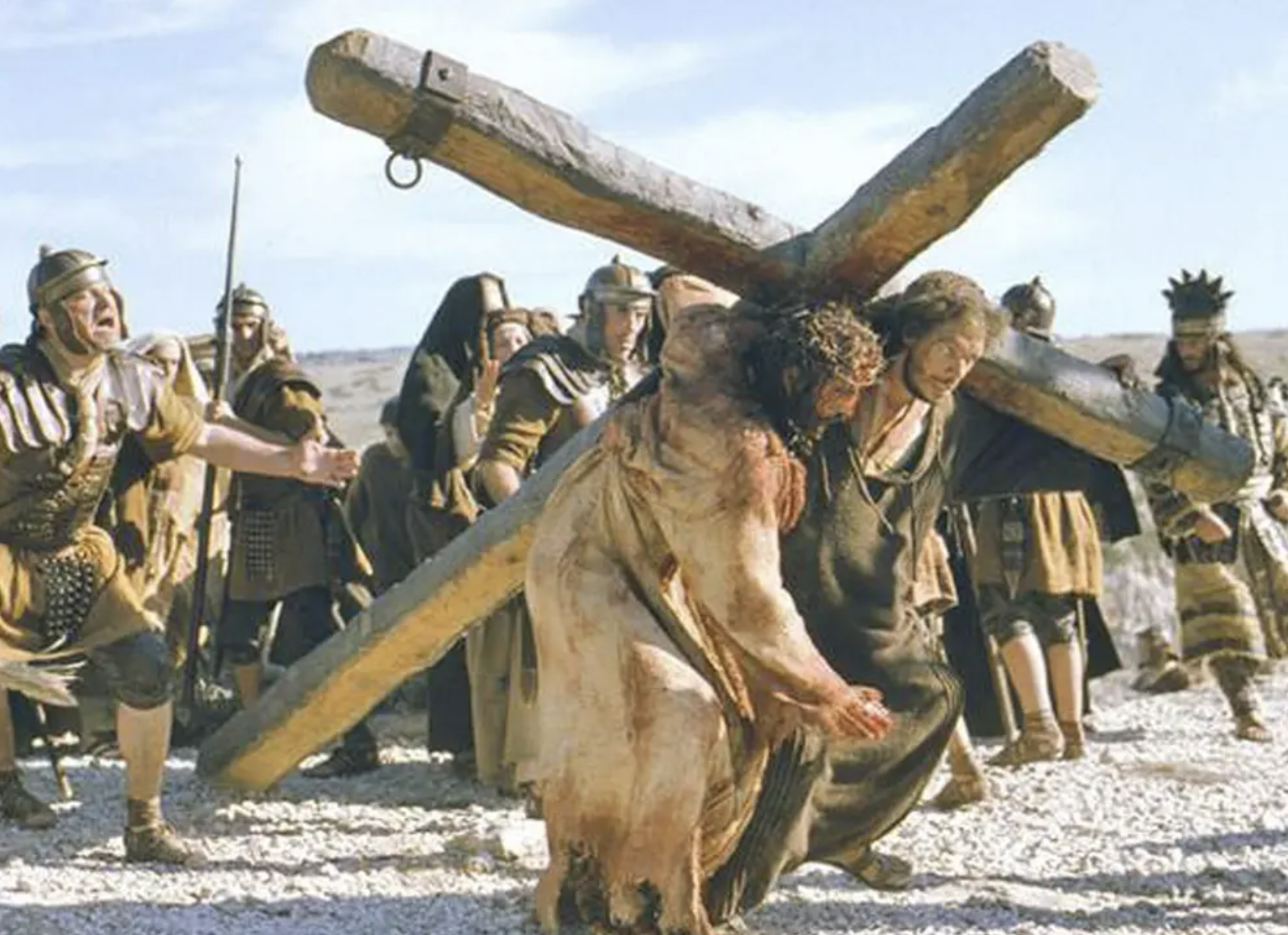 For every visitor to the city of Jerusalem, the “Way of the Cross” or Via Dolorosa is a must-do. The processional route starts at what used to be Antonia Fortress and culminates at the Church of the Holy Sepulchre, a winding 600-metre journey that is peppered with significant points that are known as “the Stations of the Cross”. There are nine stations along the route, and five more inside the church. Some traditional churches, including the Anglican, Methodist and Roman Catholic churches have artworks or sculptures marking the stations along the walls of the church building.

Christians are familiar with the fact that the road Jesus took after Pilate gave Him over to the Roman soldiers was a painful and humiliating endeavour that ended in His death on the cross. The objective of the stations of the cross is to facilitate contemplation of what Jesus endured along Via Dolorosa.

City Harvest Church’s Drama Ministry explores this theme in this year’s Easter presentation, which will be a never-before-seen amalgamation of drama, dance, music and visuals.

“This year’s Easter presentation is very special and unlike any of our previous years’ productions,” says drama director Sandy Yeo. “Even with Covid limitations and safe-distancing measures in place when preparations began, we believe the Lord has given us a creative way to tell the story of Jesus’ ultimate love for us—through drama, dance, music and visuals! So bring your friends and loved ones to church and let’s expect them to be touched by the Lord this Easter!”

While we wait eagerly for Easter weekend, City News brings you seven stations of the cross, illustrated by classic artworks. Luke 23:13-25
Then Pilate, when he had called together the chief priests, the rulers, and the people, said to them, “You have brought this Man to me, as one who misleads the people. And indeed, having examined Him in your presence, I have found no fault in this Man concerning those things of which you accuse Him; no, neither did Herod, for I sent you back to him; and indeed nothing deserving of death has been done by Him.  I will therefore chastise Him and release Him” (for it was necessary for him to release one to them at the feast).

And they all cried out at once, saying, “Away with this Man, and release to us Barabbas”—  who had been thrown into prison for a certain rebellion made in the city, and for murder.

Pilate, therefore, wishing to release Jesus, again called out to them.  But they shouted, saying, “Crucify Him, crucify Him!”

Then he said to them the third time, “Why, what evil has He done? I have found no reason for death in Him. I will therefore chastise Him and let Him go.”

But they were insistent, demanding with loud voices that He be crucified. And the voices of these men and of the chief priests prevailed. So Pilate gave sentence that it should be as they requested. And he released to them the one they requested, who for rebellion and murder had been thrown into prison; but he delivered Jesus to their will. And He, bearing His cross, went out to a place called the Place of a Skull, which is called in Hebrew, Golgotha

JESUS FALLS FOR THE FIRST TIME 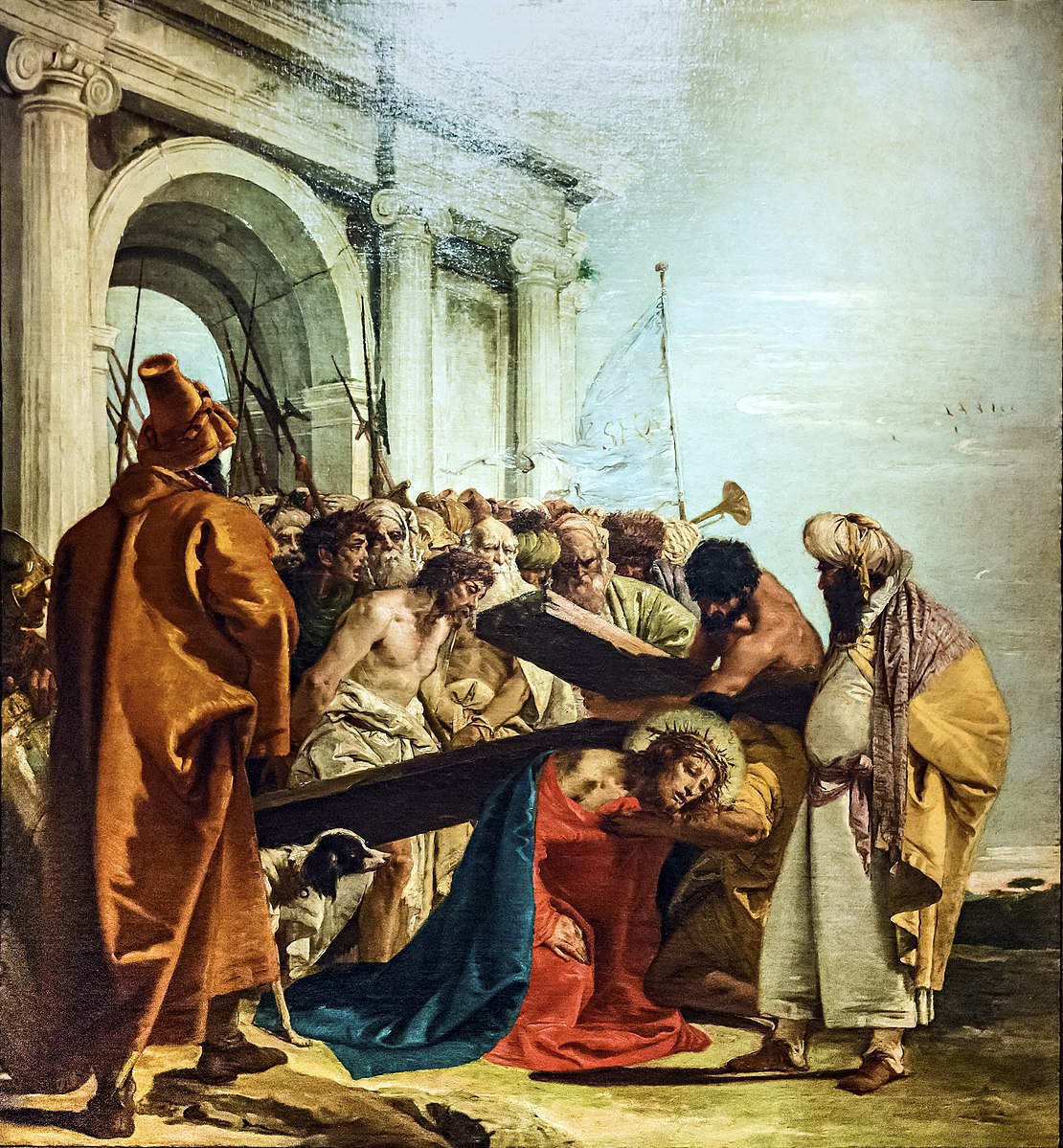 Christ Falls For The First Time by Giandomenico Tiepolo (1747-1749)

This is not found in the canonical Gospels, but popular tradition has it that Jesus fell three times on his way to the cross.

SIMON OF CYRENE CARRIES THE CROSS Christ Carrying The Cross by Titian (1508)

Luke 23:26
Now as they led Him away, they laid hold of a certain man, Simon a Cyrenian, who was coming from the country, and on him they laid the cross that he might bear it after Jesus.

JESUS IS STRIPPED OF HIS GARMENTS 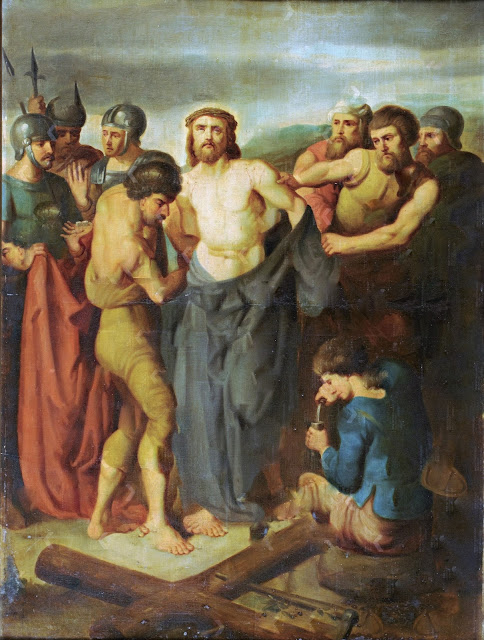 Matt 27:27-29
Then the soldiers of the governor took Jesus into the Praetorium and gathered the whole garrison around Him. And they stripped Him and put a scarlet robe on Him. When they had twisted a crown of thorns, they put it on His head, and a reed in His right hand. And they bowed the knee before Him and mocked Him, saying, “Hail, King of the Jews!”

JESUS IS NAILED TO THE CROSS Christ Nailed to the Cross by Gerard David (1481)

John 19:17-18
And He, bearing His cross, went out to a place called the Place of a Skull, which is called in Hebrew, Golgotha, where they crucified Him, and two others with Him, one on either side, and Jesus in the center

JESUS DIES ON THE CROSS Matt 27:45-50
Now from the sixth hour until the ninth hour there was darkness over all the land. And about the ninth hour Jesus cried out with a loud voice, saying, “Eli, Eli, lama sabachthani?” that is, “My God, My God, why have You forsaken Me?”

Some of those who stood there, when they heard that, said, “This Man is calling for Elijah!” Immediately one of them ran and took a sponge, filled it with sour wine and put it on a reed, and offered it to Him to drink.

The rest said, “Let Him alone; let us see if Elijah will come to save Him.”

And Jesus cried out again with a loud voice, and yielded up His spirit.

Why The Cross Is So Important: Kong Hee