In the first message of 2022, Pastor Bobby Chaw taught City Harvest Church a timely lesson on how to activate faith.

On the first weekend of 2022 (Jan 1 and 2), Bobby Chaw, the executive pastor of City Harvest Church delivered a timely sermon on how to activate one’s faith—even faith the size of a mustard seed.

He began his message with Luke 17:5, which reads, “The apostles said to the Lord, ‘Increase our faith!’” Like the apostles, many Christians often ask God to increase their faith when they are going through deep darkness or a difficult situation. 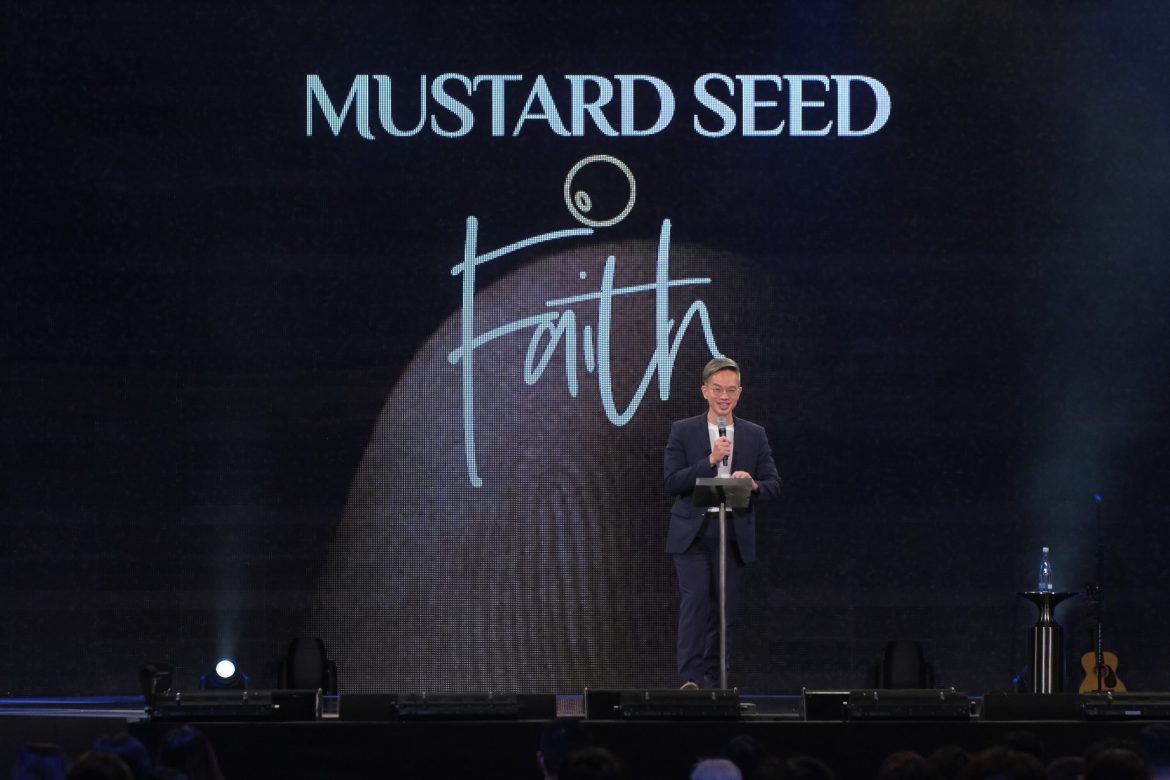 Faith is not simply a spiritual concept, or a means to get something from God. The word “faith” in Greek is pistis which is to trust in something or someone; it is the foundation of any relationship. As such, Christians can never have intimacy with God without faith!

Reading John 1:12, Pastor Bobby explained that to give God access into their lives and get connected with Him intimately, believers have to trust in His name.

“In the Bible, a name is more than just the title of a person,” said Pastor Bobby. “A name describes the person’s nature, character and the person’s work; it tells us who he is, what he has does and what he is still doing,” To believe in His name, therefore, is to trust Jesus for who He is, what He has done, and to trust Him for what He is still doing.

The pastor illustrated his point with the story of Charles Blondin, a French tightrope walker and acrobat. Blondin once performed a stunt walking a tightrope over the Niagara Falls, while pushing a wheelbarrow. He asked the crowd if they believed he could do it and they responded with loud cheers of “Yes!” After he completed the stunt, he asked if anyone would sit in the wheelbarrow as he pushed it across the tightrope. This time, nobody said a word.

“Faith in God is not just shouting yes to Jesus,” the pastor explained. “It is getting into the wheelbarrow and trusting Him—absolutely, completely—as we cross the tightrope of life.”

In fact, faith should be the believer’s way of life. Jesus’ response to the disciples’ plead to increase their faith is found in Luke 17:6. He told them that faith the size of a mustard seed—which is very small—is enough to do the impossible.

“Very often, like the disciples, we feel that our faith is not sufficient. But instead of focusing on the size of our faith, Jesus tells us to focus on the power of faith,” Pastor Bobby taught. “The key is not how big a faith you possess, but what you do with the little you have.”

Some Christians believe they have no faith, but the pastor explained that God has given every believer a measure of faith. “Jesus told the disciples that if they can activate the mustard seed faith that they have, they can do the impossible,” he continued.

With this, Pastor Bobby shared four things a Christian can do to activate his faith.

Roman 10:17 reads, “So then faith comes by hearing, and hearing by the word of God.” Pastor Bobby assured the church that God is faithful to do all He has promised in His word.

Pastor Bobby told the congregation of how he had many insecurities growing up. He was terrified of failure and responsibility and believed that he was not fit to be in any leadership position.

His thoughts began to change as he studied the Word. His favourite verse was Joshua 1:9, “Have I not commanded you? Be strong and courageous. Do not be afraid; do not be discouraged, for the Lord your God will be with you wherever you go.”

As he meditated on this verse, Pastor Bobby found that his insecurities started to loosen. Soon, he found the courage to step out and share the gospel with his friends. Later, he became a cell group leader, a full-time staffer and eventually a pastor.

“What you need to do is to let God’s Words saturate your mind and your heart,” Pastor Bobby encouraged. By doing so, one will “be transformed by the renewing of your mind” (Rom 12:2).

Jesus confessed the Scriptures in His prayers. The Lord’s Prayer that Jesus taught the disciples to pray is made up of promises and Scriptural revelations found in the Old Testament.

Pastor Bobby shared that recently, he started a prayer project for the CHC’s Chinese congregation. Every day, he would record a personal prayer—a confession of a passage in the Bible—and send it to individual members over WhatsApp.

One day, the pastor was praying Psalm 27 over a female church member. He later found out that she had been harassed by a tenant’s boyfriend and was struggling with sleepless nights and anxiety attacks. When she heard the prayer and declaration of Psalms 27 that Pastor Bobby sent, she felt the power of God come upon her and the bondage of fear was broken. Since then, she has been able to sleep through the night.

“There is power in believing and confessing the Word of God,” emphasised the pastor. “Because what He has promised, He will also be faithful to do.” 3. Receive A Vision From The Holy Spirit

When he was 75, Abraham, the father of faith received a clear vision from God to leave his home. “With this clear vision, Abraham’s faith journey was activated,” Pastor Bobby preached. “The Holy Spirit is still speaking, still giving visions and dreams.” (Acts 2:17)

Without a clear vision from the Holy Spirit, a believer’s faith is like a dormant volcano—with unrealised power and potential. A clear vision activates that faith.

“This year, won’t you pray and ask the Holy Spirit to give you a clear vision on the way you must walk, the work that you must do?” the pastor urged. “Because vision makes the impossible possible,”

Pastor Bobby gave an example: one holiday in London, he and his wife Cindy visited John Wesley’s house and museum. In the Wesley library, they came across this quote from the evangelist: “Read or get out of the ministry.” Just then, the Holy Spirit gave Cindy a clear vision to start reading. While she had always wanted to read, busyness kept her from doing so. But since the vision three years ago, she has read 83 books—more than what she had read the previous 10 years put together. A vision from God activated Cindy’s faith to start what she had put aside for many years.

At the recent Harvest Network Virtual Missions conference, CHC’s executive pastor, Sun Ho gave a prophecy that revival is coming. God gave her a phrase: “On your mark, get set, go!”

“But for many people, their entire life is ‘on your mark, get set’,’” the pastor said. “There is a go!” Taking action is an absolutely necessary part of activating the faith. A tiny mustard seed of faith with action will bring forth great results.

Alvin and Allysa are worship leaders from the Chinese service who led in the Encounter Night during the Virtual Missions conference. They were initially terrified because they had never led live worship before such a large audience. They came before God and prayed, “We do what we can, but what we cannot do, You help us.”

“What were they doing? They were activating their mustard seed faith,” Pastor Bobby preached. At the Encounter Night, the couple ushered in the presence of God and encountered God. As she led worship, Allysa could sense Jesus standing right in front of her and all her anxiety melted away.

At the end of his message, Pastor Bobby shared that he started the prayer project for the Chinese congregation because he read in the Bible that Jesus prayed for Simon Peter by name. Every morning, he would pray and confess Bible scriptures over the members. One day, he asked God if He was bored listening to his prayers that sounded mostly the same.

“God said, ‘The reason I put this vision in your heart to pray is that I want to see your face here (at the dining table where Pastor Bobby prays) every day; because I want to hear your voice’,” the pastor shared.