“The moment they came to the youth camp, we showered them with the love of God, words of affirmation, acts of service, and of course, we loved them, and they had never felt this way before,” says Lim Meng Chin about what outreach looks like in Youth-At-Risk ministry. Such is the spirit of the ministry: to love and accept young people. Meng Chin, better known as MJ, is a former staffer of the City Harvest Community Service Association and a former pastoral staffer in CHC. By 2008, MJ and his team of volunteers had reached out to 3,288 youths at risk. This outreach became part of the Church Without Wall movement that began in 1996, which propelled members of the church to reach out to those beyond the walls of the church.

Some of these youths that MJ started to befriend and mentor were vulnerable to substance abuse, dropping out of school and getting involved in gangs and fights. He roped in many of his zone leaders and cell group members to help run outreaches and programmes for these young people.

“I was a pai kia (youth at risk) myself,” MJ says of his own experience before he came to CHC. “Fights and drinking were very common for me.” When his friend brought him to church, he invited God into his life and God turned it around.

GOING TO WHERE THE YOUNG PEOPLE ARE

In the early 2000s, MJ and his team started with the simple idea: they would spend time in places that young people frequented, such as open-air basketball and street soccer courts. They would then try to identify some of these at-risk youths and invite them to events like soccer and basketball tournaments.

MJ and his team also stepped into popular youth haunts like arcades and LAN gaming centres to find opportunities to interact with these young people.

“We did things with them,” describes Jason Ang, one of the volunteers helping the youths. “When we went to game centres and they’re playing Counterstrike and stuff, we would play with them and strike up a conversation.”

Jason was only a young believer when MJ roped him in to reach out to the youths. He was an undergraduate with a little free time, so he followed MJ to different places, looking for young people to reach out to.

There were times when the volunteers were given the cold shoulder and Jason admits that he had to be very sensitive to the youths when he was trying to befriend them. But he did not let it discourage him from reaching out to others. “There will be rejection, yes. There will be people that don’t even want to engage in conversation. But there will also be others who are willing to,” he says. The key is to be sensitive to the Holy Spirit and not give up.

Jason spent time befriending those who were open to him. “As we continued to hang out with them, they became more familiar with us and then more open to sharing with us,” he adds. Jason eventually graduated from NIE and became a teacher. Naturally, he would ask these youths about school and offer to give them tuition. He also formed study groups to help them with their schoolwork.

Eventually, having formed firm friendships, Jason invited them to CHC’s youth camps, evangelistic events or cell group outings so that the youths had a chance to encounter God. He would also encourage them to bring along their friends. Once the youths got to know his cell group members, it became easier to invite them for weekly cell group meetings and weekend services.

BEING A HELP IN TIMES OF NEEDS

Reaching out to the youths take a lot of patience; sometimes, practical help in times of need can change their lives. Once, Jason reached out to is a Secondary Four student who was struggling in her studies. As he helped her with her studies he soon discovered that her dad was in debt to loan sharks.

It was a small amount of money, and Jason lent it to the family to pay off the father’s debt. To his great surprise, the youth, who had been struggling with her studies, not only passed her ‘N’ Levels but her ‘O’ Levels as well. When she entered into Polytechnic, she continued to struggle with her subjects and Jason made the effort to travel to meet and tutor her.

This young woman eventually graduated from university and landed a job with Google. Today, her parents have also become Christians. “I don’t think it’s because of the money (that her parents received Christ),” Jason says, “But it could be the constant outreach that moved them. There is always something practical that we can do to help others.”

He emphasises that when it comes to interacting with youths, it is pivotal that one does not judge them. One of the youths he was reaching out to was concerned about stepping into church simply because he was a heavy smoker. Despite all his perceived shortcomings, Jason did not judge him and that became the first step to opening his heart to Christ. 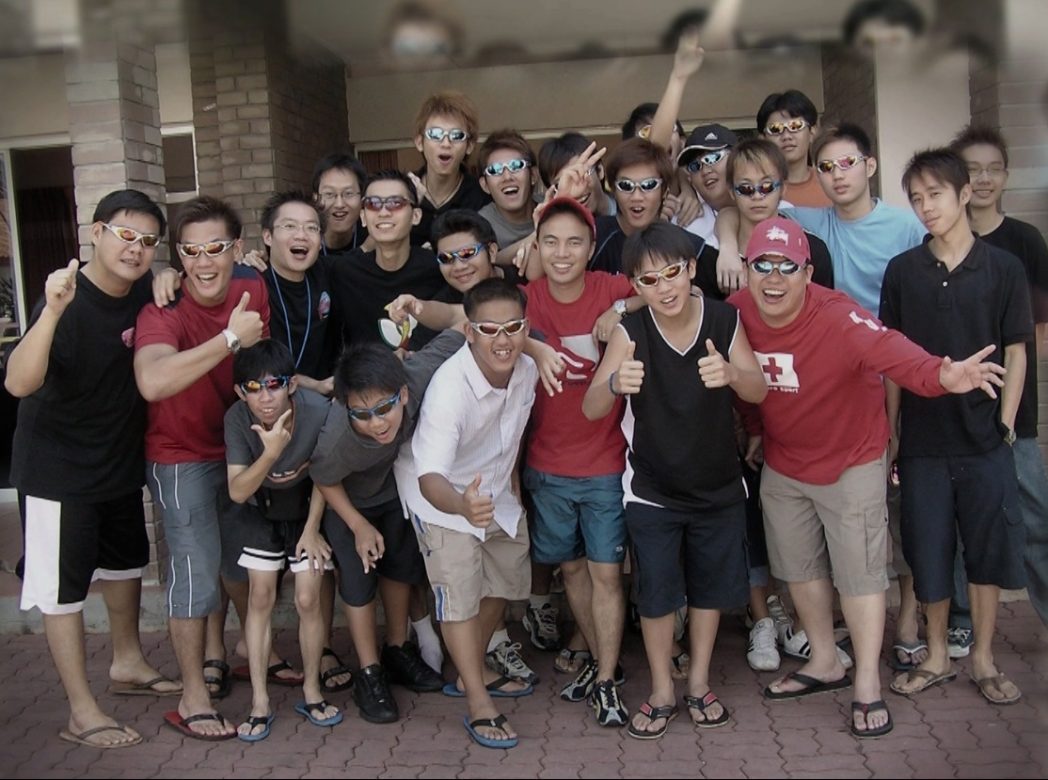 Jason (fourth from left) and the youths at a youth camp.

Jason made it a point to faithfully walk beside each of the youths in his care and support them through the different phases of their lives. “Don’t bring your own personal agenda into their lives and don’t over-push them,” he advises. “Some people feel it—they are smart after all. So, we must be sensitive in whatever we do.”

As MJ’s cell group member, Olivia Lau had many chances to interact with the youths that MJ was reaching out to. Although they all came from very different backgrounds and it took some effort to persuade them to hang out, she got along well with them and soon became their friend.

The youth camps were especially memorable to Olivia. She recalls that when these youth initially come to church, many would either put a front or struggle with communication due to their lack of support in their growing up years.

“It was during the camp that many of these walls came down,” she shares.

Olivia vividly remembers a youth who lacked motor skills despite being able-bodied. He struggled to even walk on a bench or step over obstacles. During a simple obstacle game in camp, he froze and could not move at all. But slowly, with the volunteers and other youths gently cheering him on, he took one step at a time and managed to complete the course.

“I feel moved whenever I think about the resilience that arises out of a person, when he or she simply receives a little support at a certain moment in their life,” she muses.

Today, Olivia still bumps into that young man on the streets, and she is shocked by his ability to carry on a conversation just like any ordinary young adult. He is now a supervisor in an F&B outlet.

“Regardless of where we are now in life, there is always that one thing we can do to help and encourage others—it could be just a phone call, or an email,” says Olivia. “Never think that it is too small.”

Besides at-risk youths, the team also reached out to ex-offenders. Back in 2009, Chen Jian Wei, now 37, led a cell group made up of ex-offenders for almost two years. They were no longer youths, but their needs were no different. Jian Wei (center, in green) and his cell group.

“Every day was filled with problems you needed to solve, fights you needed to break up, lots of house visits,” recounted Jian Wei. Yet these members loved God in their own ways, he says. “The presence of God was so real every time they came to worship. So, although they hadn’t got their act together yet, they were always accountable, and they would always talk to me when they had done wrong things.”

One of his most memorable experiences was with a member who had more than 200 gang members under his leadership. He left the gang when he joined Jian Wei’s cell group and distanced himself from gang-related activities, but he continued to face many issues in life.

Jian Wei had many opportunities to minister to him, making countless house visits to check on him. Despite his efforts, Jian Wei’s member eventually went back to participating in gang activities, landing him in prison.

That, however, did not stop Jian Wei from loving him. He frequently visited his member in prison and continued to be actively involved in his life after his release. This member eventually started attending a different church, and they remain friends today. He is now married and leading a stable life.

Jian Wei explains that it is not easy for ex-offenders to turn over a new leaf. “When they encounter the Lord (in prison), they would come out here and want to get their lives together. But not everyone is able to do it.”

One major issue they face is employment. Some find it hard to find a job that meets their expectation, and others find it hard to work with people. “I always tell them to put aside their old self, and I told them to pray. They’re spiritual people and they pray—but it’s not easy. Sometimes, it’s the inner demon in them that causes them to get agitated. Their first reaction would always be to get even by fighting.”

Reflecting on his ministry encounters, Jian Wei shares that it takes a lot of love and patience to walk with an ex-offender. One of the things he had learned is to exercise self-control. “In an environment where they are used to talking loudly—the loudest one wins,” he describes. “I make it a point to never show them my anger. I’ve never scolded them or embarrassed them in front of the cell group, and I think that’s very important.”

While Jian Wei was able to guide many to lead a better life, he also lost some despite investing his time and effort in them. Yet he would not have it another way. He values each opportunity he had to make a difference in other people’s life.

The Church Without Walls initiative remains the heartbeat of God in CHC today. It has impacted and changed the lives— not just of its target groups, but those of its volunteers as well. This is truly a wonderful and wholesome time commitment, and it is certainly possible even during the pandemic. After all, few things are more rewarding than mentoring and leading someone to God, and sparking off a transformation in them for the better.