Last Sunday (June 20) was Father’s Day. That weekend, Kong Hee, senior pastor of City Harvest Church delivered a message to teach and strengthen the fathers in the congregation.

He began by acknowledging and thanking all fathers—biological, foster, adoptive or spiritual—for their love towards their children.

Reading John 15:9, the pastor explained how a father’s love affects a child’s overall development, and more importantly, helps the child to relate to God. 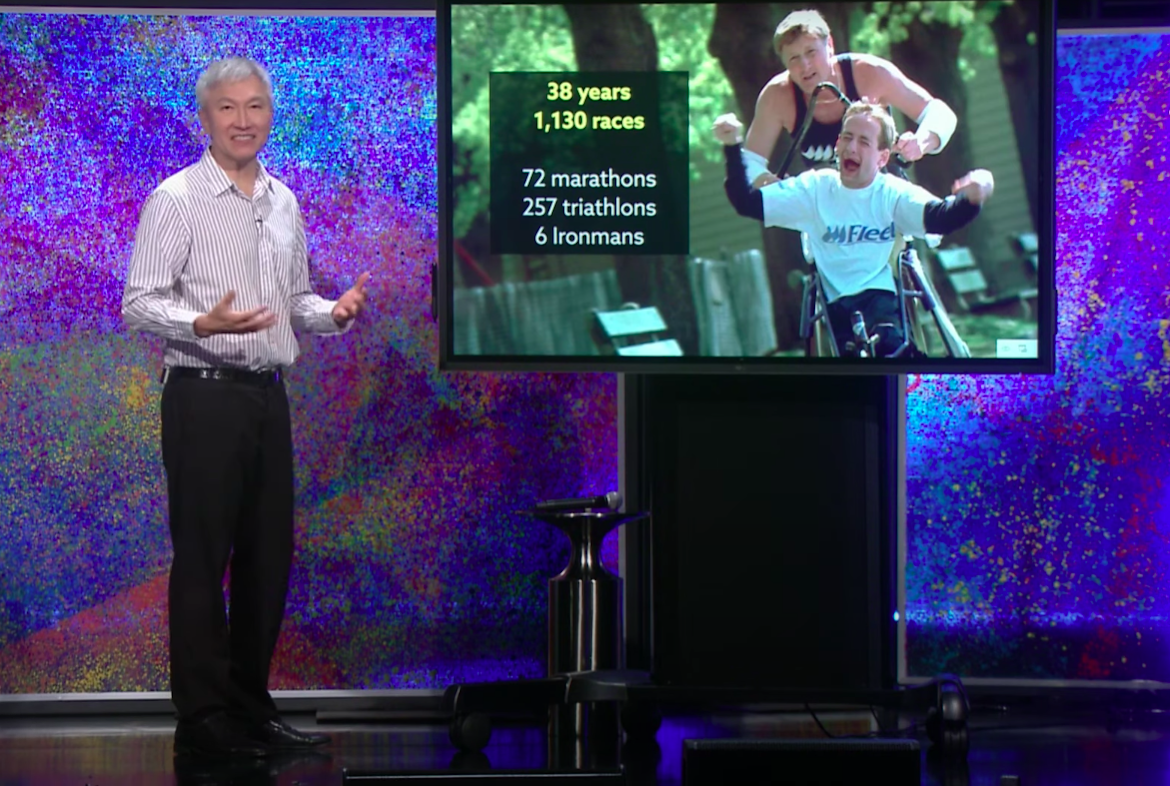 Pastor Kong told the church the heartwarming story of Team Hoyt, a special father-son Ironman team. Dick’s son Rick was born with cerebral palsy, and his parents were told that he would be a vegetable for the rest of his life. Dick rejected this prognosis, believing his son was intelligent and deserved to live an active life like any other boy. One day when Rick was 15, his father decided to take part in a charity run, pushing his son in a wheelchair. This became a turning point in both their lives: Rick told his father that when they were running, he felt like he wasn’t handicapped. Dick and Rick spent nearly four decades participating in major races, most notably the Boston Marathon—Team Hoyt was a familiar sight at the race. In 38 years, the father-son duo completed 1,130 races, including 72 marathons, 257 triathlons and six Ironman races. Dick passed away in March this year at the age of 80. Once, in an interview, Rick called his father the greatest father in the world. He said, “The thing I’d most like is for my dad to sit in the chair and I would push him for once.”

A FATHER IS A FRIEND
Pastor Kong proceeded to unpack the acronym F.A.T.H.E.R, which list out six qualities that a good father has, modelling after Father God.

Beginning with F, the pastor commented that every father is a friend. Sharing fond memories from his childhood, he told the church that his father is his oldest and longest friend. “The definition of a true friend is someone who has your back, no matter what,” said Pastor Kong. “Fathers, you are the protector. You watch out for your kids to ensure that they are never in danger.”

True friends are also encouraging. Reading from the Gospels, Pastor Kong noted that God gave Jesus his Son what every child needed from his father. In Matthew 3:17, God said in an audible voice, “This is my beloved Son, with whom I am well pleased”. Such a pronouncement would have given Jesus assurance. The pastor went on to emphasise the importance of giving assurance: it should never be conditional, for example, only when a child performs well in school, but it must be given freely just as our Heavenly Father assured Jesus.

“The way you assure your children is by spending time with them—not just short, quality time, but a lot of good time; big chunks of time,” Pastor Kong advised.

Returning to the verse in Matthew 3:17, Pastor Kong pointed out the affection expressed by Father God. He reminded the congregation that in the same way, earthly fathers must learn to outwardly express their affections. “You must learn to hug your kids and do it as much as you possibly can,” he taught.

Lastly, that verse shows the absolute approval of the Father. The pastor emphasised that only when a child receives assurance, affection and approval from his father, can he grow up psychologically healthy and happy.

A FATHER IS AN ADVISOR
Pastor Kong shared how he learned valuable and vital life lessons from his own father over the years, one of which was that he needed to be independent and to support his family on his own. Although there were many times his father could have come to his rescue, he chose to let Pastor Kong take responsibility and learn to solve his own problems. “I learned to transfer my trust from my dad to God,” the pastor added.

He elaborated by reading Psalm 16:7, explaining that the role of an advisor is to also pray for others. “As a father, you are the priest over your household, so you must pray for God’s kingdom to come over your kids and your family,” he preached.

A FATHER IS A TEACHER

Quoting Proverbs 22:6, Pastor Kong encouraged every father figure to teach their children, especially in life and in the way of the Lord. “Most important of all, we must lovingly teach them in the ways of the Lord,” the pastor said. He reminded fathers not to provoke their children to anger (Eph 6:4) That means to not be angry and unreasonable, blaming them or talking down to them constantly. Such behaviour makes children angry with life and angry with God.

“When was the last time God raised His voice angrily at you and shouted at you?” the pastor asked before encouraging fathers to be patient and kind with their children. 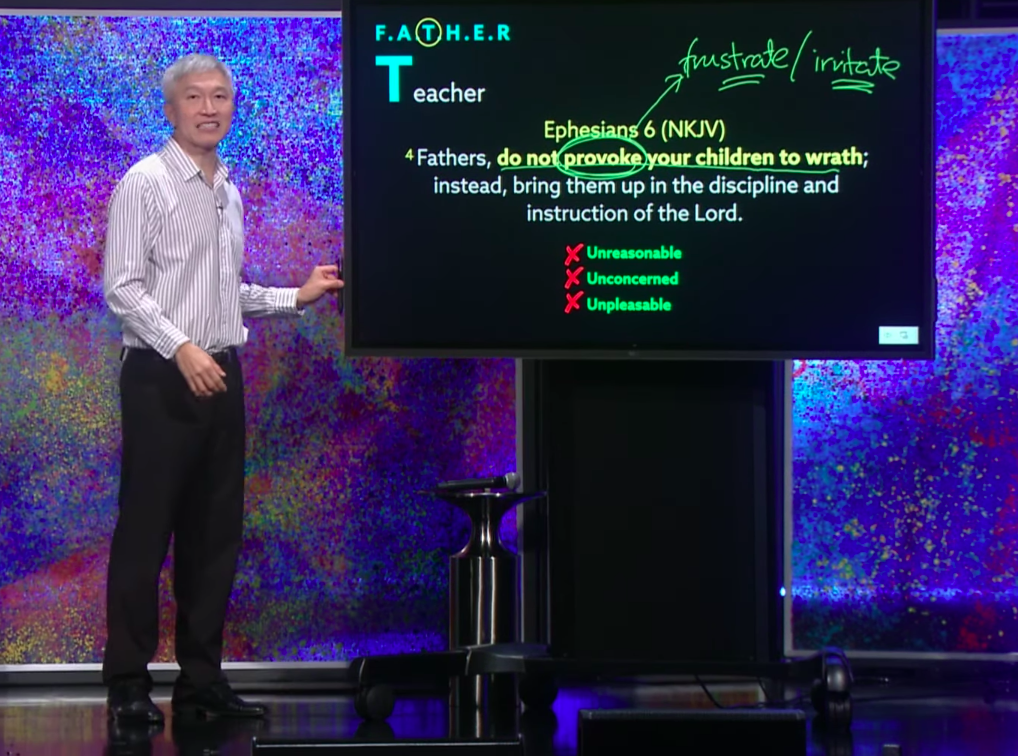 “In the Old Testament, the teachers of Israel were the prophets,” he continued. “You must learn to prophesy to your kids: speak vision, speak hope and destiny into their hearts, into their minds.”

A FATHER IS A HEALER
Pastor Kong shared a story of how, when he was 11, he was mugged on his way to the National Library. He was wearing his father’s watch that day—an item of great sentimental value. In shock, he walked all the way to his father’s office and burst into tears.The first thing his father did was to hug and reassure Pastor Kong that it was okay. “Instantly, I was healed of the trauma of being strangled by two robbers,” the pastor related, adding that from that day, his father never again mentioned the watch.

Reading Psalms 147, Pastor Kong reminded the church that God heals the brokenhearted. A parent might think that their child is all grown up but “no matter how old they are, a child needs his or her dad,” the pastor said. He shared that when the CHC case first happened 11 years ago, it was his father who brought him a healing touch.

“I may be the senior pastor of a church, but it doesn’t matter,” he shared. “What I needed at that moment was Dad, and I received healing in my soul.”

A FATHER LEADS BY EXAMPLE
“Every dad must lead by being a role model, rather than by rules and regulations,” Pastor Kong said. He highlighted that Jesus learned mercy and holiness from His Heavenly Father (1 Pet 1:16). Similarly, earthly fathers must be able to teach their children through their actions.

Every time the father sins, a hole is created in the umbrella. When Satan starts raining on their lives, the rain passes through the holes in the umbrella, and falls on the children.

“Every time we fathers confess our sins, we patch up our umbrellas, and we keep our umbrellas intact,” the pastor taught. “We must surrender our sins to the Lord and be the spiritual covering He wants us to be.”

A FATHER IS RELIABLE
Just as the Heavenly Father is constant and reliable (Deut 7:9), one ought to be reliable as a father. “God is a very reliable provider, we can rely on Him to provide; He’s Jehovah Jireh,” the pastor said, encouraging the fathers to also be counted upon to provide for their family. 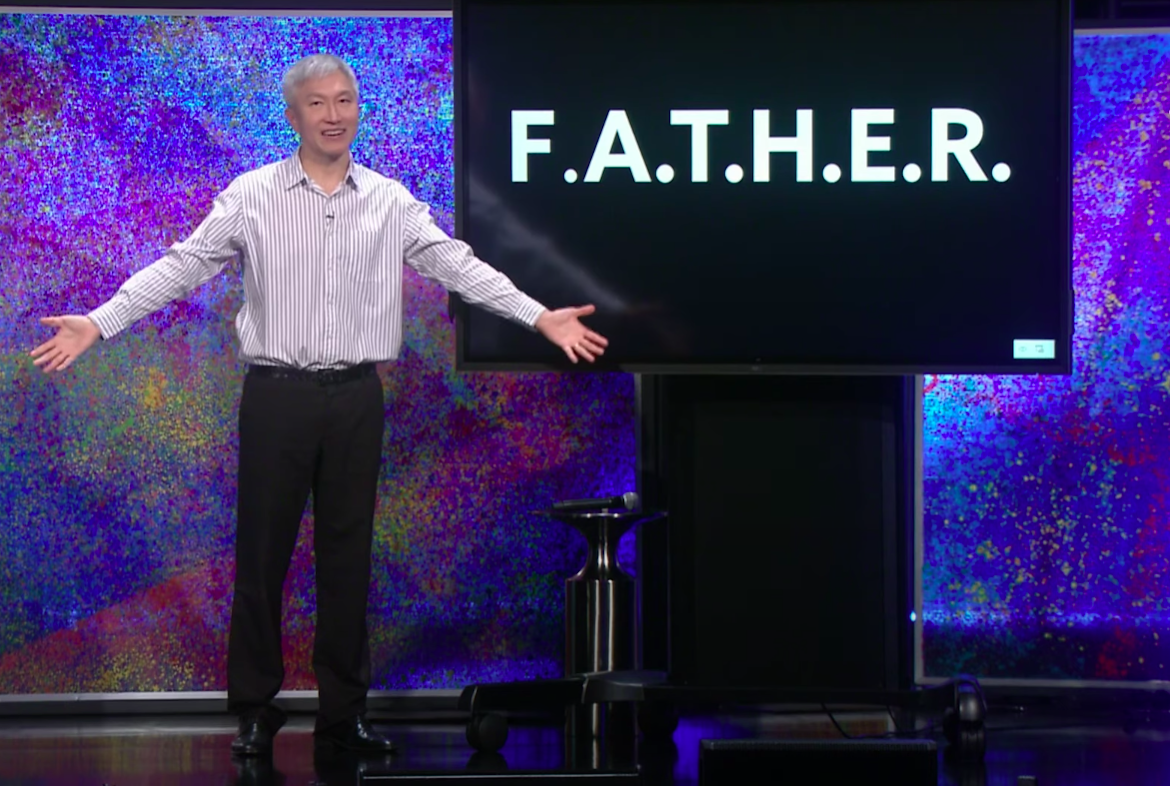 A father’s word must be his bond. Reading Psalms 138:2 and Romans 11:29, Pastor Kong illustrated that both God and Jesus are promise-keepers. “If we don’t keep our promises, there is no trust and no trust means there is no relationship,” he said. To produce a stable family with secured children, a father must learn to keep his promises and be reliable.

In closing, Pastor Kong encouraged the congregation to spend time with their fathers and celebrate Father’s Day with a good meal. For those who have never known their fathers or whose fathers have passed away, he encouraged them to write a letter to God, giving Him all their hurts and pain, and allow God to heal their hearts.