Five Kids, Businesses & A Cafe: How The Kaos Do It All With God

They were university mates who got married, had five children, and gave birth to multiple businesses, the latest of which is the popular café Main Street Commissary. How do Kelvin Kao and Daphne Ling do it? The couple share their key to success in love, life, and business partnership. 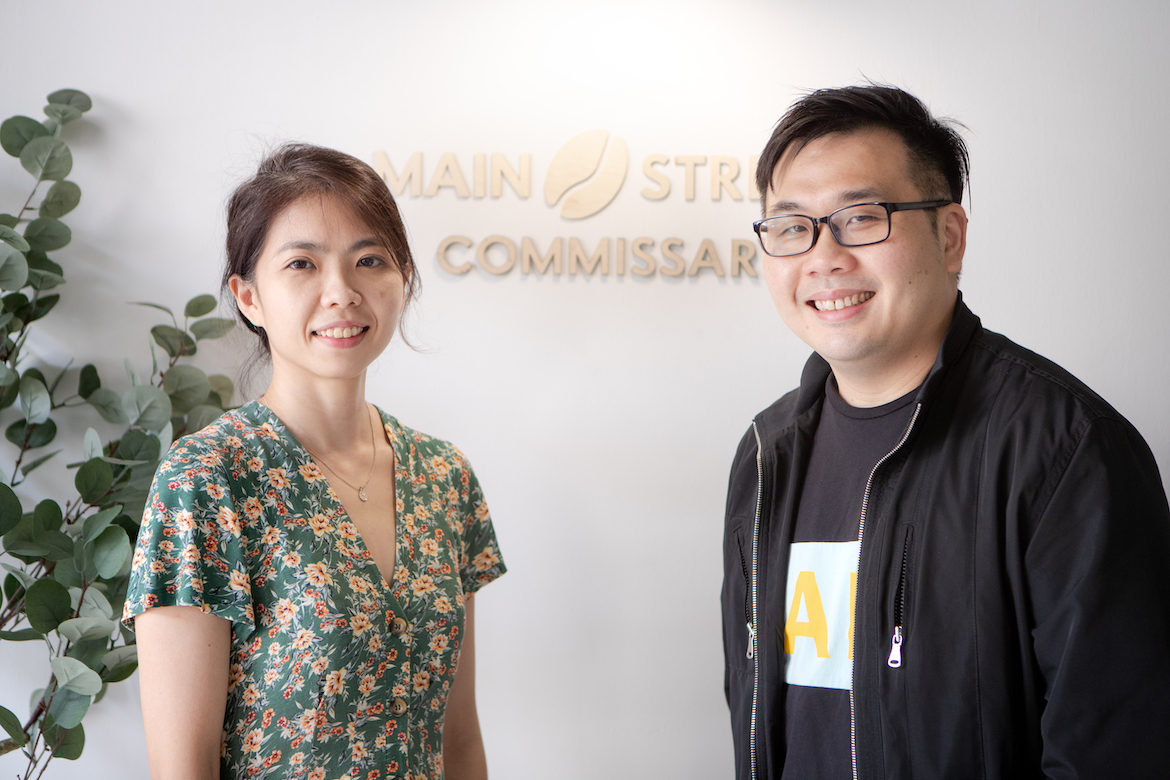 There’s an old saying that one should never work with a family member, particularly not one’s spouse. Married couple Kelvin Kao, 41, and Daphne Ling, 39, have not only defied this, they have thrived—albeit with a lot of work, understanding and “letting Jesus take the wheel”.

“That’s actually my go-to phrase!” Daphne laughs as she and her husband share their story about how they opened a new café in the middle of the pandemic, while running a 26-man strong creative agency and production house, a few other side projects like GEN X Singapore (a website for those born between 1965 and 1980), and raising their five children: Truett, 13; Kirsten, 12; Finn, 9; Theo, 7 and Hayley, 5.

MAIN STREET COMMISSARY: THE ACCIDENTAL CAFE
Along Rowell Road in Little India sits Main Street Commissary, Kelvin and Daphne’s latest venture: a minimalist-chic cafe that wants to be known for its glorious coffee and healthy (but delicious!) lunch and brunch choices, including a salad bar. Their creative agency, Protocol, as well as their production house, Unmastered, sit in the same building.

Kelvin shares that the area where the café now resides was initially meant to house their office extension. However, when they brought in a coffee machine, the idea morphed into a convenient meeting space for clients, before it finally actualized itself as a café.

“The idea just kept getting bigger and bigger,” Kelvin recalls, “thanks to an interior designer friend who came in one day and suggested that we knock down some walls and turn it into a nice meeting space. The more we discussed, the more we thought it might work as a full F&B space. Instead of having many small tables, like most cafes, we opted for larger tables to fit four, for meetings and people to work.”

The café is still in its early stages, with Daphne handling the day-to-day operations assisted by baristas from the cafe Bearded Bella, until Main Street Commissary finds its footing. The artisanal coffees are first-rate—Americanos, lattes, Magik (a double ristretto topped with steamed milk)—brewed to be enjoyed with one of the range of treats available, including lava chocolate cake and croissants. 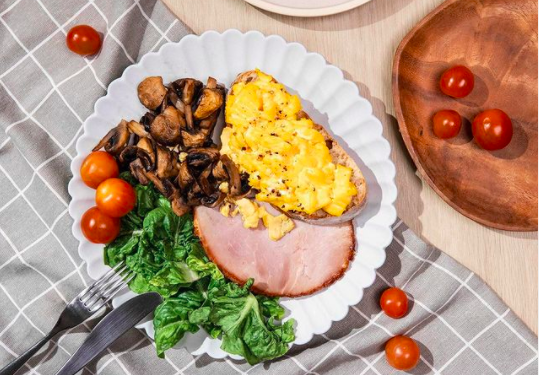 “We’ve also had help from our previous cell group member Dean Ng, a chef who kindly offered to craft our menu,” Kelvin says, proudly holding up the menu. “I particularly like the Breakfast of Champions, which is a generous English breakfast platter, served with excellent homemade sourdough bread.”

The salad bar was conceptualised with the help of team Protocol. The Kaos had asked their team what they wanted to see on the menu, and many said salad since there was nowhere in the vicinity to get a salad. Now their team can conveniently traipse down to the café and have a healthy meal.

Though this power couple is taking things one day at a time—perfecting coffee and mastering the menu—they also have their eyes set on a larger goal.

“Moving forward, we are looking to host more events in this space,” shares Daphne. Main Street Commissary recently hosted a sold-out exhibition “Young Love” by photographer Sean Lee. “What’s important for us is to use this space to build a sense of community and to bring people together.” 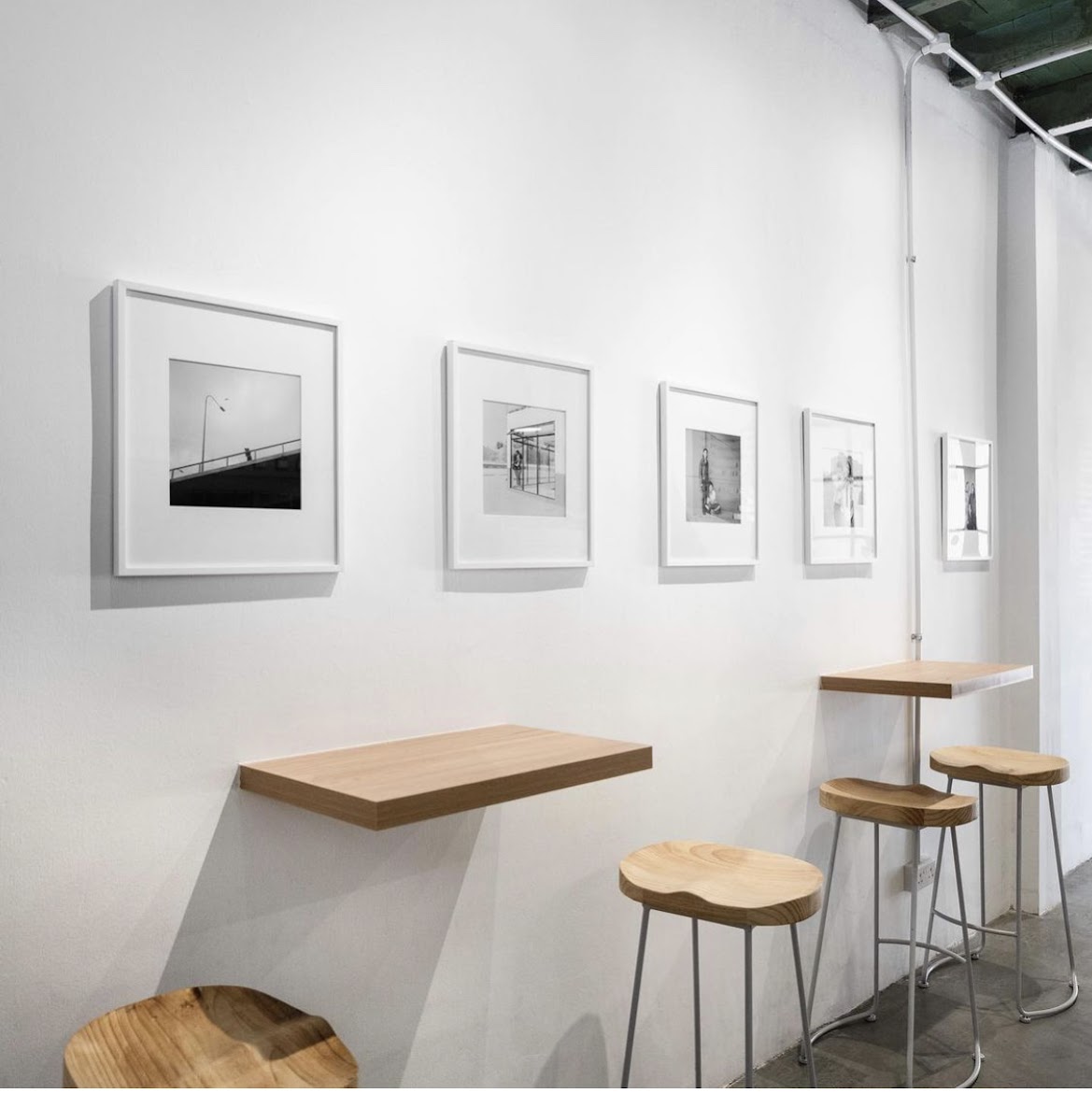 The café will also introduce a new merchandise booth to house a roster of unique merchandise from Protocol and other partners.

PERFECT PARTNERS
While Daphne takes care of Main Street Commissary, Kelvin’s focus is on their main business, Protocol. The nine-year-old creative agency has worked with a plethora of brands from Clarins and Club Med to Milo and Meiji, specialising in branding on social media platforms.

It takes a very special partnership to spin this many plates, and the ease with which Kelvin and Daphne are able to split the workload is a big part of what makes them so successful as business and marriage partners.

“Kelvin is the visionary,” states Daphne. “He constantly pushes us forward as he looks at new opportunities, while I look at the details and  the gaps to make sure it all fits. I also tend to be the realist that lends to the balance in case we are being too optimistic in our projections.” Fourteen years married with a lifetime of adventures ahead of them

This practice counterbalancing also helps them manage their teams—Protocol prides itself on a team that is “young, strident, dumb, great”, that is, a hungry, audacious, demanding bunch that isn’t afraid to fail. Managing such a team requires their collective wisdom so they often lean on each other to ensure the right tone and message is sent out.

“It comes down to very practical things,” Kelvin illustrates. “Before I send out an email or text, I check in with Daphne to make sure it is framed the right way.”

Both Kelvin and Daphne also care deeply for their teams and invest time to improve each member. “We like to think that by taking care of our people, the business grows,” he explains. “One of the reasons why we started the agency was to challenge the existing agency culture.”

Kelvin and Daphne have worked hard to be the difference. “We hope to incorporate a little bit of goodness into what we do so that people enjoy working here. We try to keep things light here and we don’t work till late.” 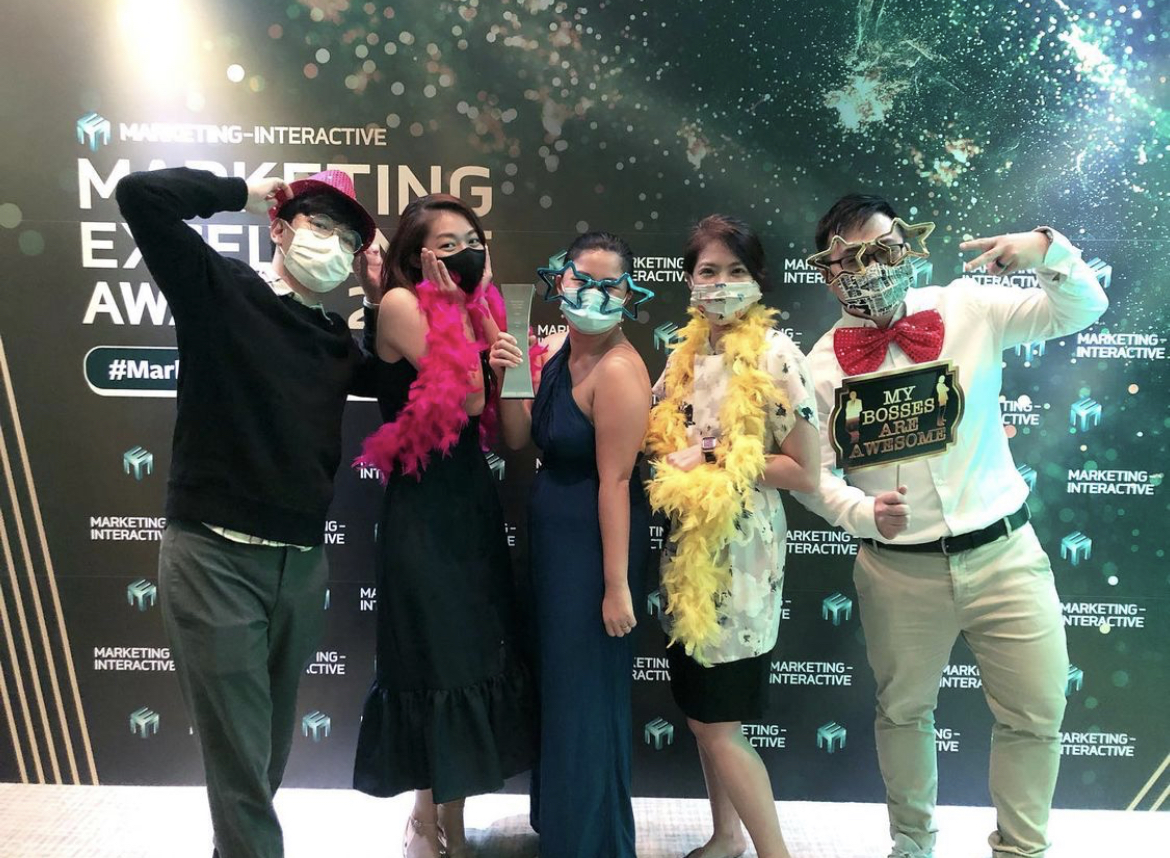 As firm believers in work-life balance, the couple ensure their teams run regular hours as this  also gives them the opportunity to spend time with their five children. “I hope our kids will see us as involved parents,” Daphne says with a laugh. “Although…they may enjoy their lives more if we are less involved!”

Given their family-style relationship with their team, they both find it difficult when a team member leaves them. But this also motivates them to do even better to improve their agency. Last year, in spite of the pandemic, Kelvin and Daphne were happy to be able to keep all their team members.

TAKING THAT LEAP INTO THE UNKNOWN
They look perfect together, but the pair guffaws loudly when asked how they are able to work well together as a couple. They are quick to point out that things have not always been smooth sailing and they have had to work hard for many years to reach this current sweet spot. 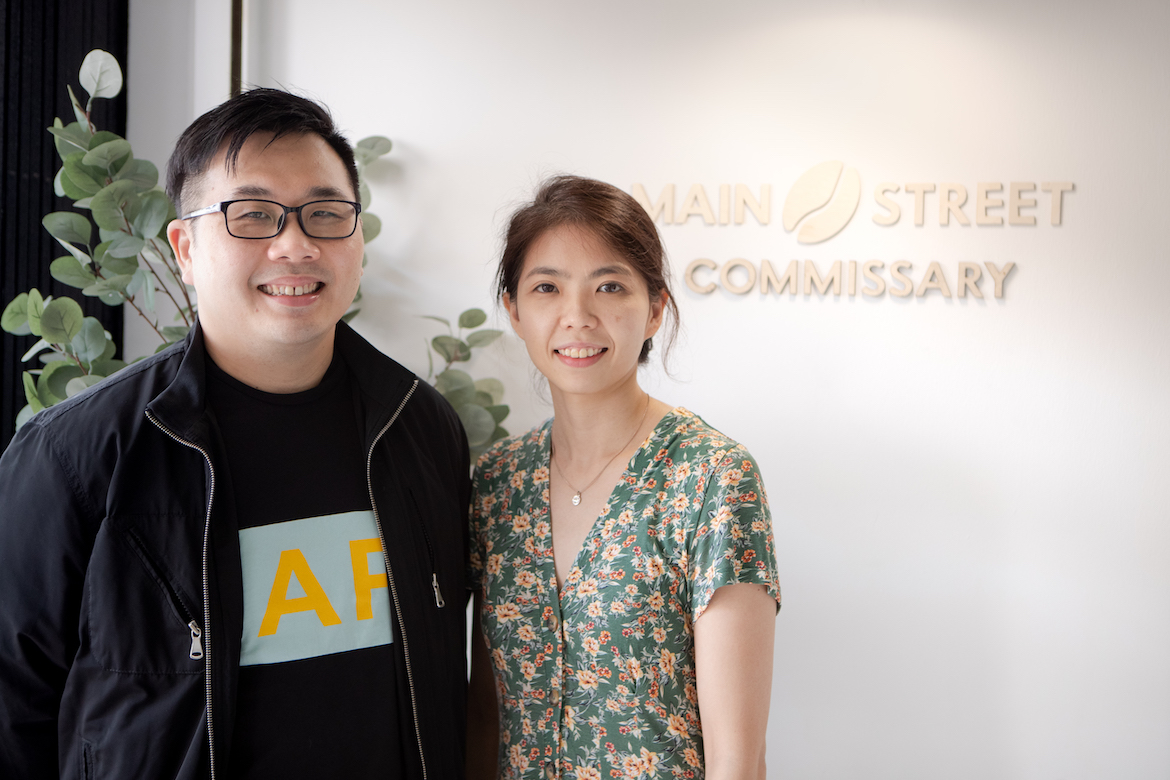 “We had the benefit of meeting in school and working together on school projects,” Daphne reveals. The couple first met at the Nanyang Technological University, where they both pursued Mass Communication. “We were 19, 20. We had the time to navigate through all this,” she says of how their working relationship developed. “We also had similar interests and ideas of what works, so we naturally gravitated toward each other and ended up together.”

This flow in their relationship gave Kelvin the courage to take the leap from being an employee to starting the agency from scratch. He was worried about job security at first—“our third kid was on the way”—but things changed  after attending a Leader’s Meeting at City Harvest Church, where Pastor Phil Pringle of C3 Church in Oxford Falls, Sydney was preaching. He remembers, “I was filled with courage and had absolute certainty that I should take the step to start the business.”

God gave the same assurance to Daphne. “There was just this sense of peace that we should go ahead and do it. Obviously the anxiety was ‘We’re going to have to figure this out’. The worst case scenario was, ‘We’re just going to go back to whatever we were doing before.’ At that point of time I was still staying at home with the kids, so it was super exciting.” 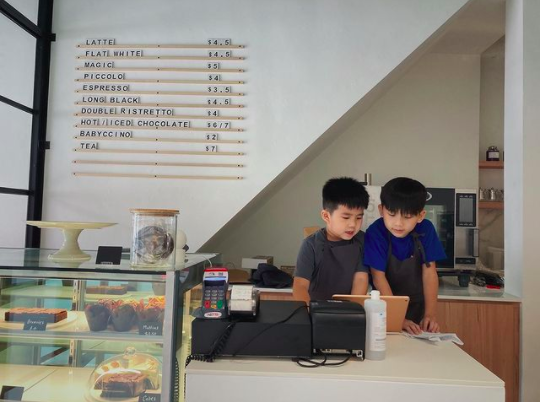 Two of the Kao children learning the family business

This burst of God-given confidence was essential in helping the Kaos get Protocol up and running. In the initial months, Daphne took on a host of freelance projects to bring income to tie them through.

“That was nine years ago,” she marvels. “On hindsight, thinking about all the challenges we had to face, it really was a huge risk.”

Kelvin chimes in: “We’re just very grateful it all worked out!”

One piece of advice Kelvin would give to anyone looking to make that leap and start their own business is, “Don’t let failure bring you down, and don’t ever give up on the favour of God, which goes beyond  the visible things like prospering in business and family.  Should we fail, it means it didn’t work out, and that  is not the end. Try again, try something else. Move on with faith and courage.”

PUTTING GOD FIRST
Through all the ups and downs, Kelvin and Daphne have seen God’s hand in their lives. “It could have all gone sideways at any point, but for us it has been about doing the best we can and trusting God to take care of us,” Daphne says. 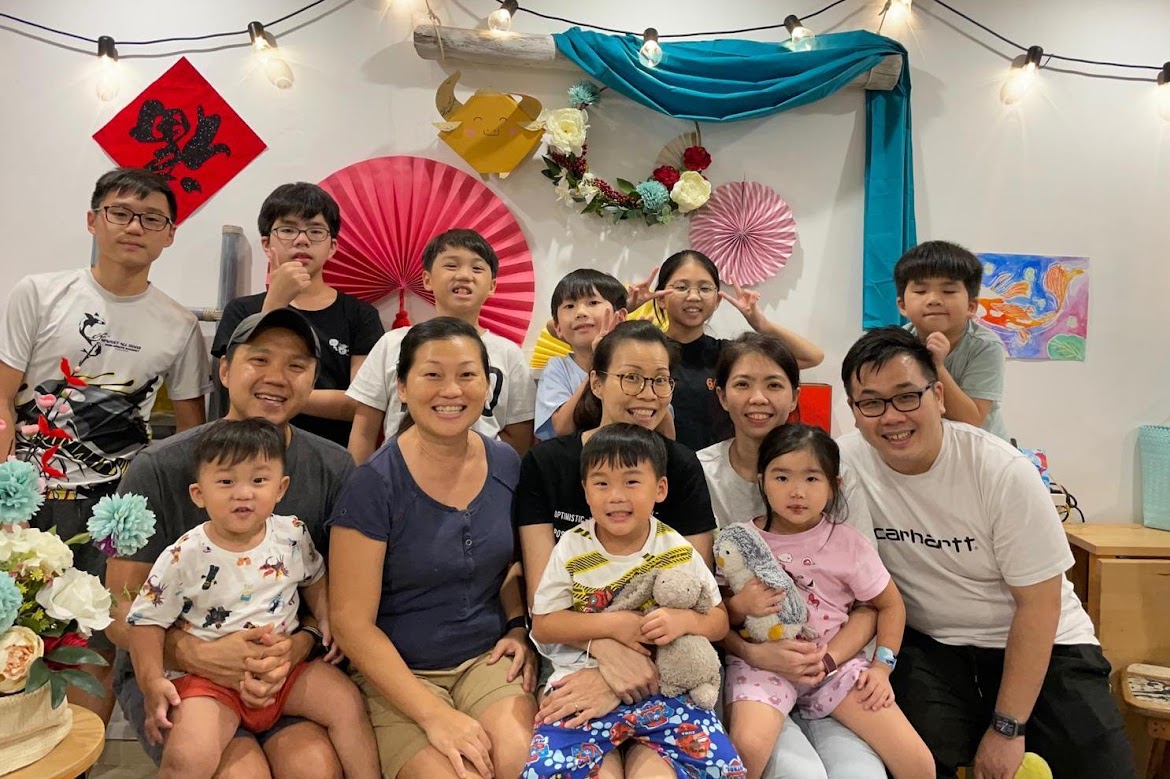 Kelvin and Daphne with their cell group

She explains that this deep confidence in God stems from the teachings that have shaped their world view since they were youths growing up in CHC, and from the strong support system they developed at church, which now includes many friends from their past and present cell groups.

Despite their busy schedule, the couple regularly attend cell group meetings and services. Kelvin shares how he had made a promise to God when he was young that he would always make worshipping God a priority—a promise he has faithfully kept.

Placed in a high-stress environment like running a business (and they run several businesses!) together could be disastrous for any couple. But the grace of God is evidently at work in their lives and business. The way they complete each other’s sentences and complement each other’s replies shows the deep respect and understanding they have for one another. Their joyous banter and the lightness with which they speak of overcoming past difficulties are testament to a couple who have braved storms together.

More importantly, their commitment to God and their unwavering confidence in His favour for them and their household have shaped their life decisions, big and small. Indeed, Kelvin and Daphne demonstrate how seeking God and His kingdom first causes many good things to be added to them.

A Letter from Pastor Phil

The Restorative Power Of God

“The Most Beautiful Thing Is To Discover Your...

Standing Strong Together, Come What May