How God Has Moved In Malaysian Churches During COVID-19

City News spoke to four Malaysian pastors in The Harvest Network to find out how their churches found their footing this trying past year.

A year has passed since COVID-19 hit Malaysia, and the number of cases it is seeing has been on the increase since late last year, prompting the Malaysian government to re-introduce the Movement Control Order in hopes of curbing the spread.

“The light shines in the darkness, and the darkness has not overcome it,” reads John 1:15. This is the common thread that links the Malaysian churches in City Harvest Church’s affiliate body, The Harvest Network. Even as the pandemic grew and services had to be moved online,  many saw the hand of God move in their church and the lives of their members.

When the first MCO started on Mar 18, 2020, many churches were caught by surprise. Those that were less tech-savvy or have elderly members felt somewhat lost in the beginning. 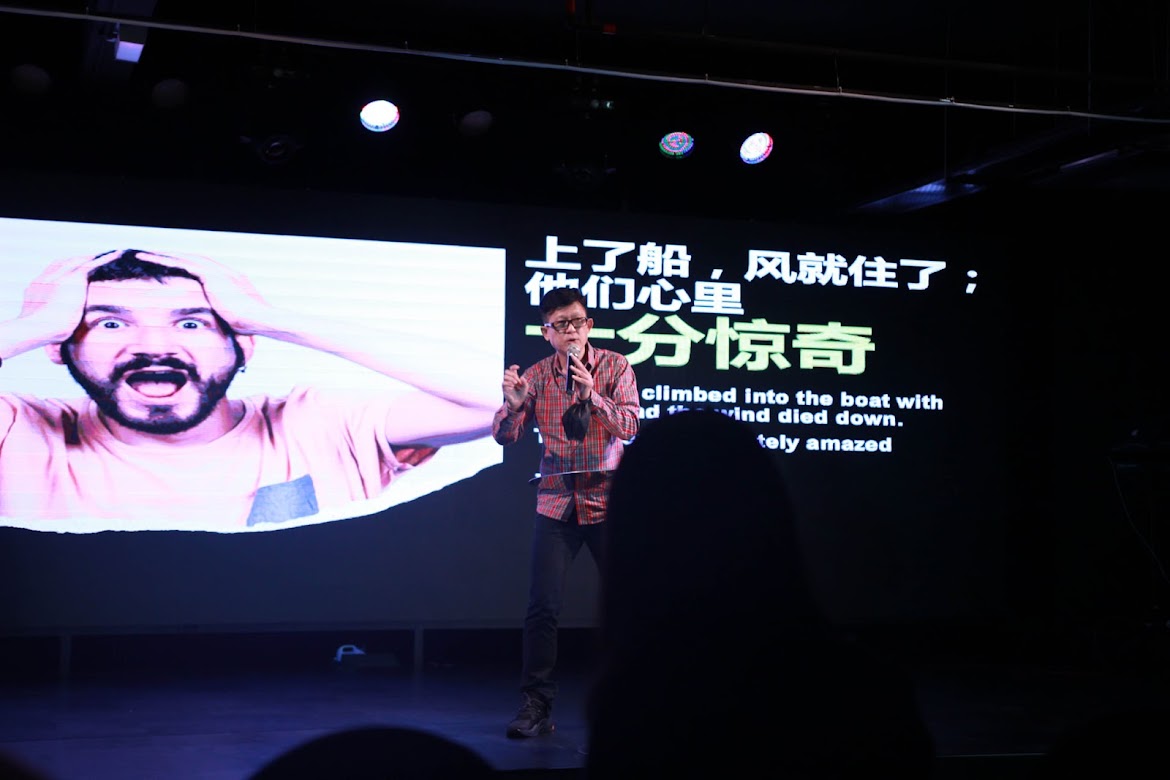 David Saw, senior pastor of City Harvest Church, Prai had an interesting experience learning how to bring weekend services online. “Our church is small so we don’t do things online a lot. When we had to stop on-site services all of a sudden, our first challenge was to learn how to keep our services running through the Internet,” he told City News in Mandarin.

Since he seldom needed to deal with technology in his daily work, Pastor David found it challenging to learn the ropes. “To minimise contact, I was the only one in church doing the live broadcast for the online service. The first few weeks were quite chaotic because I had to toggle between videos for the different segments of service, and I played the wrong video a few times. The service was live on Facebook so it was really quite funny,” he recalled, laughing.

“I wasn’t used to preaching to the camera; I seldom did that in the past,” he added. “Also, I had to preach to an empty hall. But it was a lesson worth learning, a chance to equip myself with more skills. If there hadn’t been the MCO, I would probably never have had a chance to learn all this, so that’s one good thing that came out of it.”

The abrupt change brought on by the MCO also posed challenged to Lian Choon Wah, senior pastor of Kuala Lumpur Harvest Church and City Harvest Church Ipoh. Speaking to City News in Mandarin, he said, “It was a drastic action taken by our government—during the MCO everything was so chaotic. When we first started holding online services via Zoom, we were all quite lost because we were so used to on-site services.” 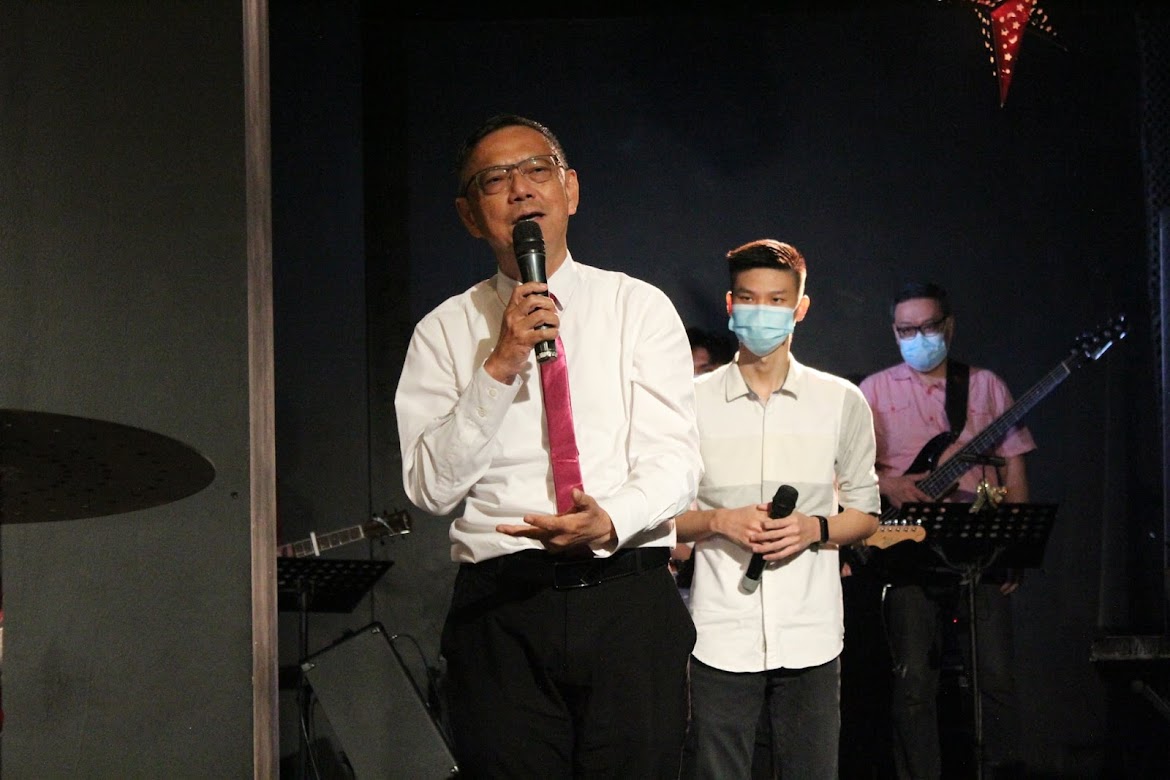 The churches that Pastor Lian oversees consist of mostly Chinese congregations. Many of them are elderly and less savvy when it comes to using technology. “We can’t visit them, so we can only call them to follow up on them. For those who have children, we’ll ask their children to help them go online,” he explained.

Another issue that Pastor Lian did not anticipate was how lost his church members would become in the vast world of social media. “All the churches in Malaysia took their services online because of the MCO. After a few months, we realised that many members were getting ‘lost’ in the sea of online media.”

Due to the confusing choices available on social media sites like YouTube and Facebook, some members began hearing heretical messages and, being not deeply rooted in the Word, “took it all in,” said Pastor Lian.

Upon discovering this, Pastor Lian began to teach his congregation not to believe in everything they watch online. He also started encouraging them to watch CHC Singapore’s services, both English and Chinese, online.

“Thankfully, Pastor Kong (Hee, senior pastor of CHC, Singapore) emphasised so much on cultivating Christlikeness at that period of time,” he said. “I told my members to follow all of Pastor Kong’s messages online, because he was teaching the foundations of Christianity and the whole foundation of what THN believes.”

When the first MCO ended for Penang and CHC, Prai went back to having services on-site, Pastor David initially didn’t expect many attendees, but he was pleasantly surprised. “We saw many newcomers in church during the pandemic. This is a revelation to me because, to our human minds, this is impossible, but God made a way,” he said. “So even when our services were ‘on and off’, we still led people to salvation. This was a new experience for me.”

In the final month of 2020, CHC, Prai conducted a water baptism for four new believers. “Because of the pandemic, we prepared a personal inflatable pool for each of the candidates for hygiene purposes. God truly moved in very special ways.” 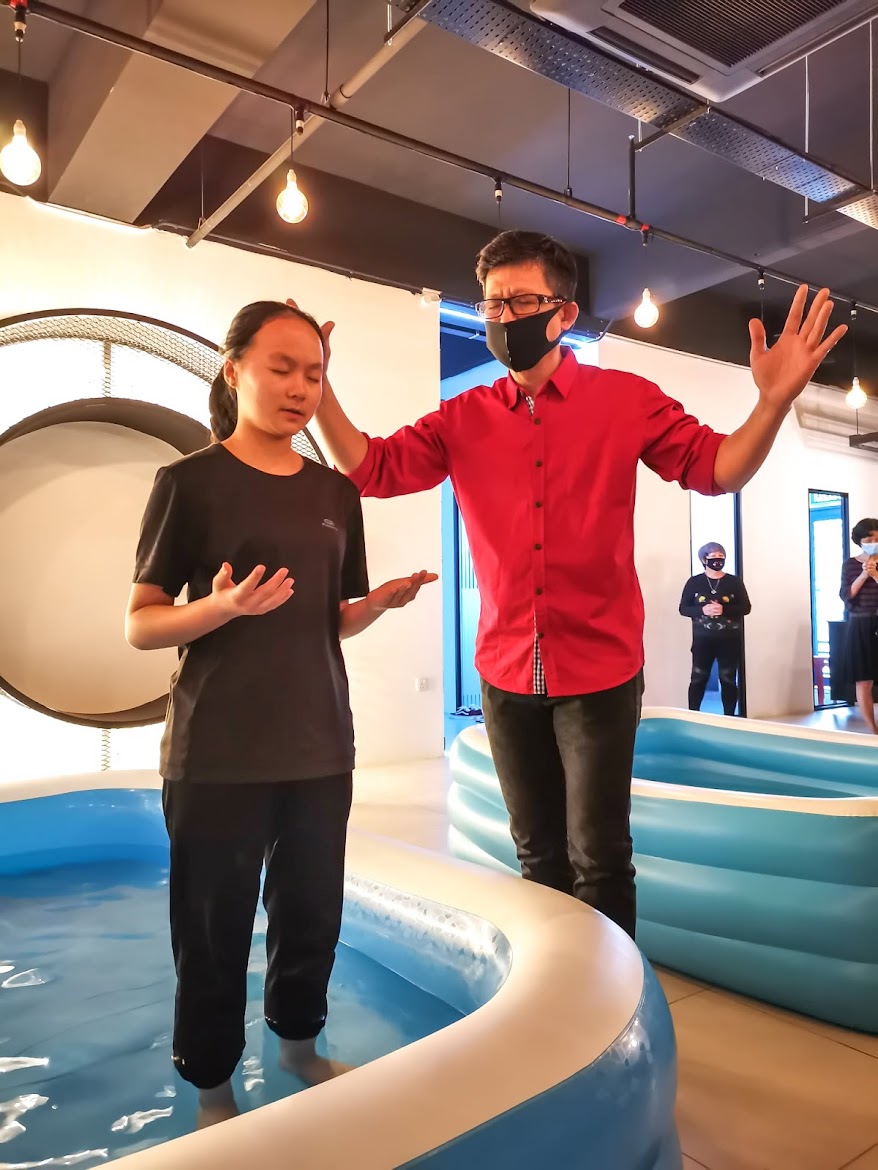 Pastor David believe that even though the pandemic is not over, God has already started to move in powerful ways. During Christmas last year, he preached about Jesus being the “Wonderful Counselor”, and he he felt the word “Wonderful” was engraved in his heart.

“During on-site services now, we are seeing the Holy Spirit moving in a very powerful way. When the Lord leads, I would still give an altar call, with social distancing measures in place. But even with that distance, the Holy Spirit still sets people free and many have received healing. We didn’t even lay hands on them because we didn’t want to have any bodily contact. It’s really amazing. You’ll think that because of COVID, we would need to rush through our services and not expect much, but the Holy Spirit has a different plan. We just flow along with what He is doing.”

GOD IS GOOD ALL THE TIME

Over in East Malaysia, God has been moving in a different way. City Harvest Church Kuching was preparing to move to a new sanctuary a few months before COVID-19 hit.

“Actually, our financial situation was very challenging,” shared Kelvin Tiong, a pastor in CHC, Kuching. “If we had had a choice, we wouldn’t have gone on with our renovation last year. The pandemic really affected us a lot, and we could only trust God. But as the renovation progressed, we began to see that God was preparing a very ‘scary’ miracle.” 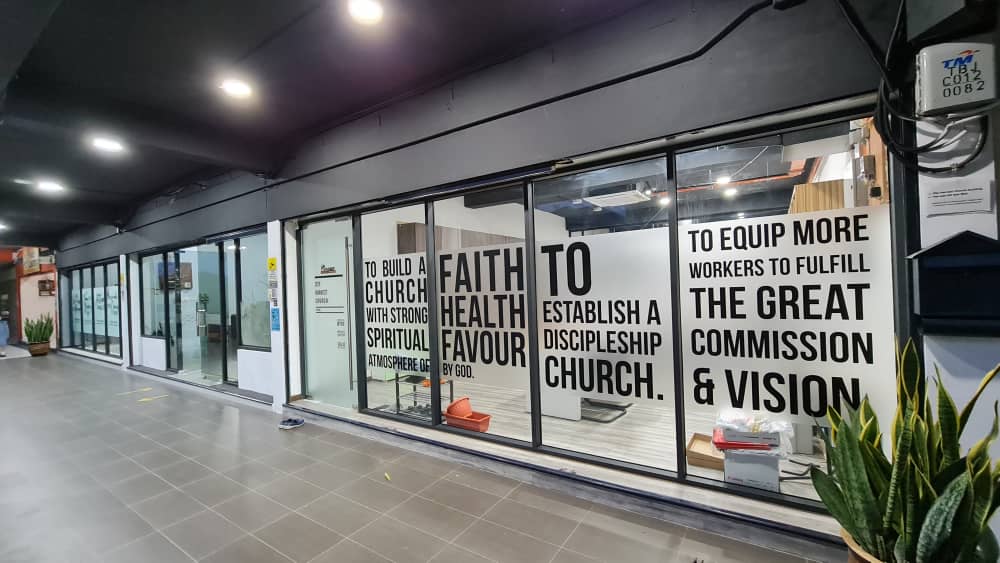 The plan was to join up three shophouses, two of which had been bought by the church while the third one was rented. “We couldn’t start the first stage of renovations because it was very costly. We didn’t want any pillars, so we needed to change the whole structure of the roof to make sure it could support the building,” he recalled.

Out of the blue, a member called them up and offered to pay for the cost of demolition and structural carpentry work. “This member’s construction company builds bridges and has done many government projects,” explained Pastor Kelvin. “He came and offered to do the first stage of renovation for the church as an offering.”

Renovation began in Nov 2019 but works had to stop in March when the MCO started. “I thank God that they continued working after MCO ended,” said the pastor.

The second stage of the renovation called for plastering of the ceiling, putting up partitions and other tasks. Little did Pastor Kelvin know, God was preparing the way for that, too: another member of the church who owned a well-known construction company in Kuching offered to do all the works at no cost.

The only thing left to do was to paint the church. That too was costly. “At that time I was doing renovations for my home, so I asked my interior designer to recommend a professional painter,” Pastor Kelvin said. Coincidentally, the owner of the paint company recommended by the interior designer had been a member of CHC, Kuching 17 years ago, and he had been close to the founders of the church.

“I met this former member and he said, ‘You just tell me how many colours you want, what paint you want—we will sponsor all the paint,’” recounted Pastor Kelvin. “God truly did everything for us.”

“The paint company introduced a painter to us who quoted us RM1,000 for painting the whole church–exterior and interior. He asked, ‘Can or not, is it too much?’ It was very affordable! God is so good!” Pastor Kelvin declared. 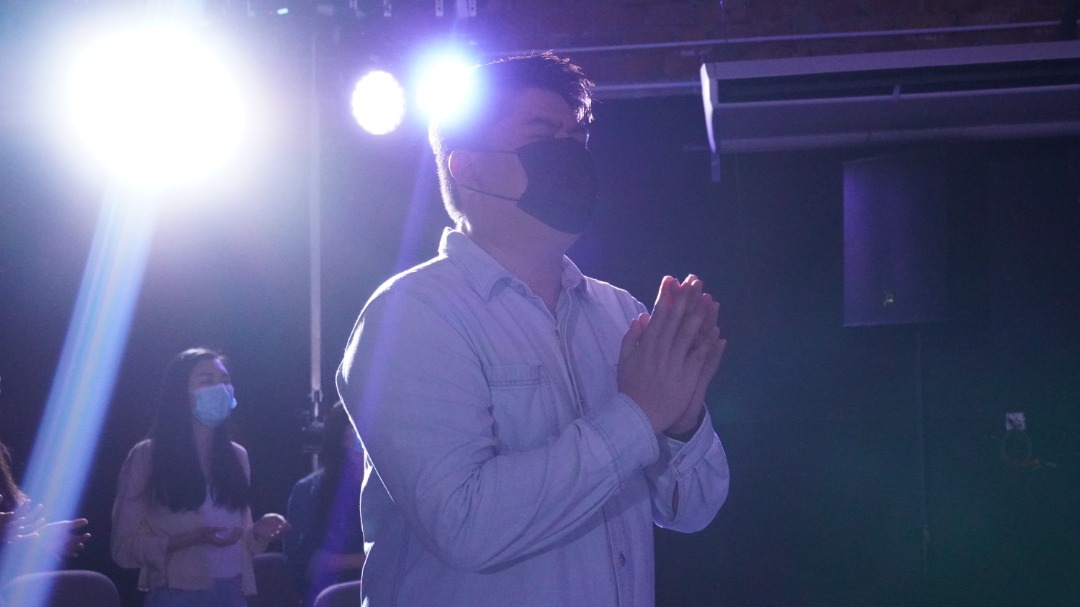 GOD IS DOING A NEW THING

The pandemic may have interrupted the usual church activities, but it also taught the church leaders many things. Dave Thong, senior pastor of City Harvest Church Sitiawan shared his learning experience. 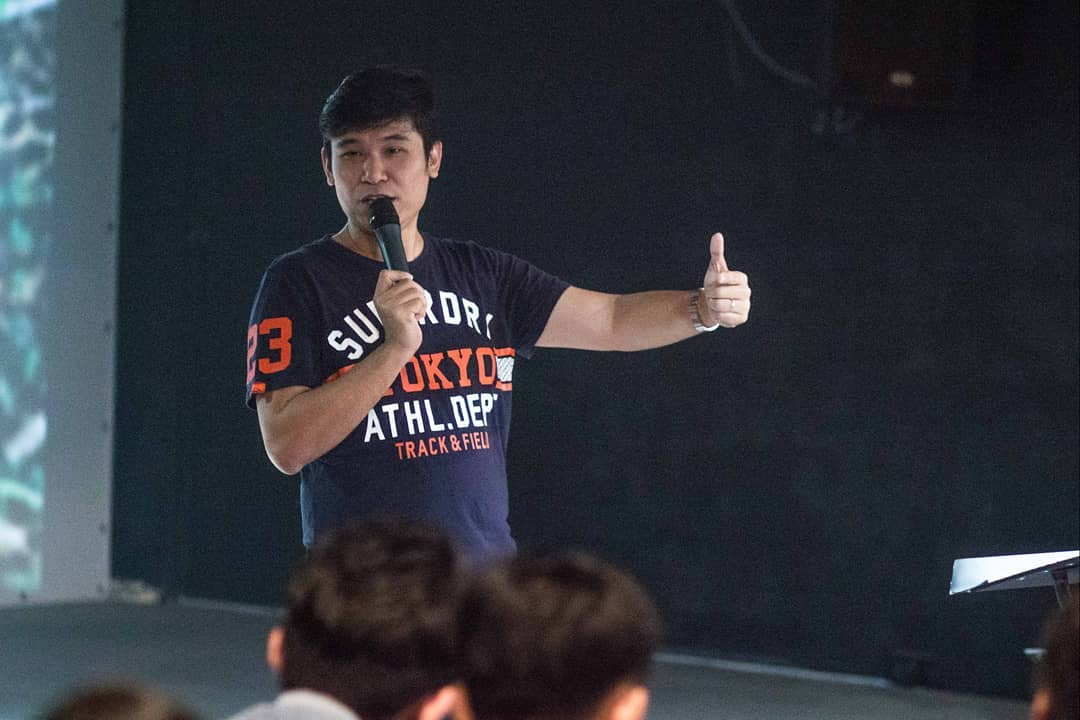 “In the second half of last year, I started to sense more and more in my heart that, when we can’t meet as a church face-to-face, God still wants to meet us in a new way. We are so used to meeting in person, and we think that that is how Christian services or cell group and prayer meetings should be, since that’s how we learnt to experience God. But, in spite of all these restrictions we have now, God can become more real to us individually.”

Pastor Dave saw this period of time as a sifting process. “Some of the members that have always been on the verge may fall away from church a little at this time. But then there are those members that you’re not sure are growing, and it is during this time that you realise they have actually been silently growing. When on-site services resume, they are the ones you see in church. If they can’t come, they will catch services online. They are committed and they love God. While we see a fall in numbers, we also see the growth in individuals, in their spiritual lives. That is encouraging to me.”

Pastor Lian echoed Pastor Dave’s thoughts: “The thing I learned most from this pandemic is that we need to rethink the old way we do church. In the past, we believed that we have to come to a physical place to have meetings because we have been doing that for decades. But this pandemic showed us that in the future, nearer to the End Times, all this will become the new normal. Being restricted in our gatherings will become a new normal. It shows us that building on cell groups, like they did in the early church, is the right way to go.”

Pastor Lian added, “In our own walk with God, the most important thing is our relationship with Him. During the first MCO, my messages emphasised a lot on connecting with God because when you face a lot of problems, nobody can help you but Him. At the most crucial moment, you need to know how to go back to reading the word of God, and how to seek spiritual covering.”

Pastor Lian shared that his focus now is on developing the cell groups in his church, training the cell group leaders and their next-in-line to pastor their members. “It should be one member looking after another, and not everyone looking to the pastor,” he pointed out. “So that one day, if we all can’t go to church anymore, we will still continue to grow spiritually.”

How To Support Children With Autism

Harvest Network Churches In India Hold On To...

The Book Of Revelation: What We Learn From...