In the second instalment of his sermon on building while waiting for God’s promises, Pastor Wu Yuzhuang taught the church to stay planted and obedient to God’s word.

Continuing from his previous message on what to do while waiting for God’s promises, City Harvest Church pastor Wu Yuzhuang encouraged the church members to stay planted where they are and be fruitful. 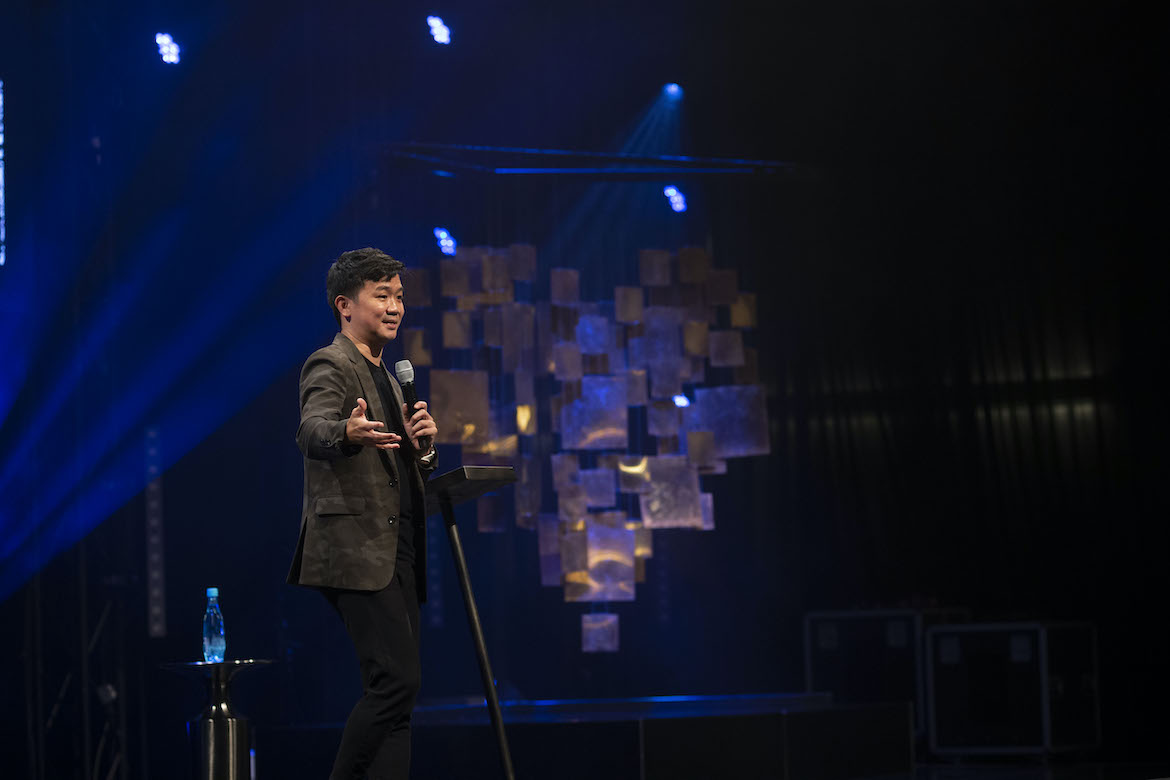 As he opened his message on the weekend of Jan 16 and 17, he brought the congregation back to Jeremiah 29, where the children of Israel were exiled to Babylon. Reading from v5, the pastor highlighted two things that God wanted His people to do while they were in captivity: “Build houses and dwell in them; plant gardens and eat their fruit.”

Pastor Zhuang explained that the command to plant gardens showed that even in the midst of difficulties, the children of Israel were expected to be productive. He encouraged the church that this applied to them too.

In the pandemic, many people consider themselves under poor circumstances. They may feel like their experience or their gifts and talents are not recognised, or that they are underpaid. Some feel that they are under fire. “While we may be under, we must know that it is not over for us,” the pastor preached.

UNDER BUT NOT OVER

Psalm 1:3 reads “He shall be like a tree, planted by the rivers of water, that brings forth its fruit in its season, whose leaf also shall not wither; and whatever he does shall prosper.” There are four lessons to be learned from this verse, noted Pastor Zhuang.

First, Christian are like trees that are being planted. The pastor explained that most of the time, God wants His people to stay planted where they are. A common response to a crisis is to escape.

The pastor encouraged the congregation to stay planted instead of walking out of difficult circumstances, be it their marriages, cell group or church. “You’ve got to learn to fight for whatever that is left,” he said. “Very often, we don’t see the fruits in our lives because we are not willing to stay long enough for God to do the work.”

Furthermore, what one plants is usually not trees but seeds. Even if one is left with only a small seed, it would become a plant given time, and it will eventually bear fruit. The key is to remain planted. 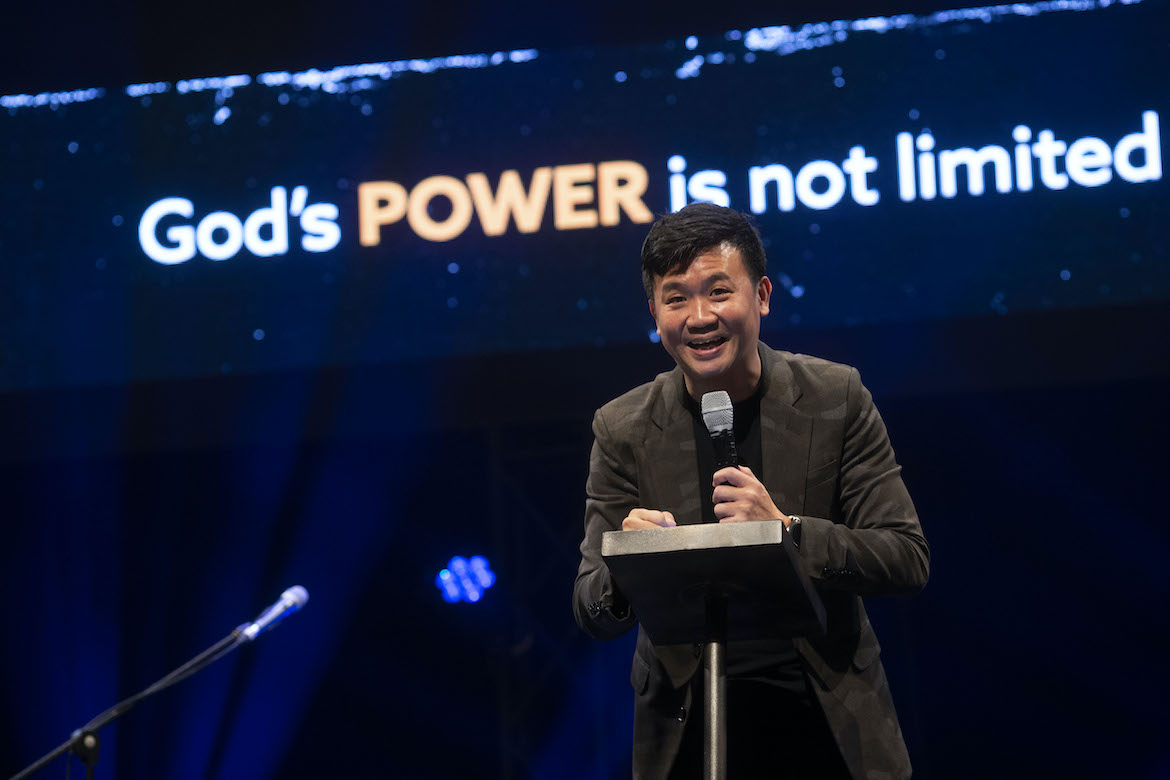 Another thing about seeds is that there is life inside the seed, the pastor noted. Just like a seed, there is life in every Christian: that life is Christ. With Christ, regardless of one’s circumstances, there will be hope for a breakthrough.

He encouraged the church not to depend on the economy or the company they work for, but to stay connected to God and be dependent on Him, knowing that He is their source.

Fourth, one would never wither. “This means that we will never run dry, even when others are withering because of a bad season,” he explained.

Lastly, one would prosper in all that he does. Regardless of one’s circumstances, he would continue to prosper according to the promises of God (Jer 29:5-6) This does not mean that a Christian will not suffer hardship; it means that in the midst of one’s suffering, God will become his source and sustain him.

PLANTED FOR A PURPOSE

Pastor Zhuang then redirected the congregation to a well-known Bible story about King Nebuchadnezzar and three young Hebrew captives, Shadrach, Meshach and Abednego.

The three young men lived in Babylon, where the king had made a tall golden image of himself and passed the decree that everyone had to bow to the idol. Shadrach, Meshach and Abednego refused to do so because they were followers of Jehovah God.

Despite facing persecution because of their conviction, the three young men knew that God had put them in the situation for a purpose, postulated Pastor Zhuang. “There is a purpose for where God has planted you—the place of your employment is the place of His assignment.” The job that God has planted each believer in has a purpose. “Even if the job is not your mission, your job could be your mission field,” explained the pastor. “And God is using you to influence someone, or to plant seeds to make a difference in somebody’s life.” Even if one does not see the immediate impact he makes, he is still part of a bigger plan that God has (1 Cor 3:6).

Because God has a purpose for placing a believer in his workplace, the devil wants to distract the believer from fulfilling his purpose. “That’s why you face so many problems at work!” the pastor added.

Reading from Daniel 3, Pastor Zhuang noted that Shadrach, Meshach and Abednego were backstabbed by their colleagues who were jealous of them. Eventually, the King gave the three an ultimatum: to bow down to Him or to be burnt alive.

The three young men chose to trust in Jehovah God and deny the king. The pastor went on to ask the congregation what they would choose when they go through hellfire: would they choose to trust in themselves or in God’s promises?

“When your faith is under the fire, choose obedience over the outcome,” exhorted Pastor Zhuang.

Something miraculous happened when the three young men chose to trust God. They were thrown into the fiery furnace but a fourth man appeared in the fire–Jesus had come to rescue them. This was Christophany—the pre-incarnate manifestation of Christ.

While God did not keep the three young men from being pushed into the fire, when they were in the fire, He jumped in together with them and protected them. “God made them fire-proof!” the pastor quipped. They came out of the fire utterly smoke-free. Similarly, Christians can come out of the pandemic unaffected when they put their trust in the Lord.

Because of this incident, King Nebuchadnezzar had a change of heart and considered Jehovah God greater than any other god.

“The only people that can reach out to someone who has everything are people who have something that money cannot buy,” the pastor said. The three young men had the spiritual aroma that caused others be curious about the living God. Pastor Zhuang pointed out that just like Shadrach, Meshach and Abednego, every Christian has a God-given purpose in his sphere of influence.

In closing, the pastor encouraged the church to choose obedience above outcome in whatever circumstances they face. It it more important to obey God and to recognise His purpose in one’s life, so that one will be fruitful and prosper in whatever one does.