Taking A Family Business Into The Future: Chun Fa Pork

Singapore’s wet markets are bustling hubs in the wee hours of the day. For Mabel Lee, being her parents’ little stall helper growing up has led to the birth of a start-up that bridges tradition with innovation.

Chun Fa Pork elevates fresh pork to a brand new level— just click on its Instagram feed and you will see beautifully-shot pork dishes and cuts of pork that will inspire meals for weeks on end. 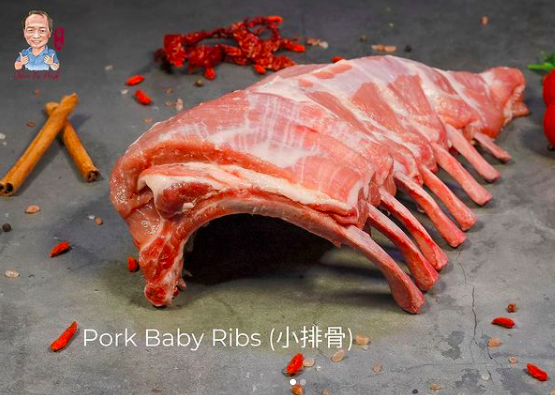 Many of these photos are taken by customers, not the start-up, attesting to the true love a growing fanbase has for Chun Fa Pork’s offerings: fresh wet market pork, well portioned, packed, labelled and delivered to your doorstep.

CHC member Mabel Lee (together with her husband Daniel Poh) is the third generation to be involved in the business. She upscales the packaging, delivery and marketing of the quality pork her father Lee Chun Fa procures.

ALL IN THE FAMILY

The family business began over 40 years ago. Mabel’s grandfather owned multiple pig farms in Lim Chu Kang and Jalan Kayu, and her father, the namesake of the business, grew up learning the ins and outs of the trade from his father and brothers. Affectionately known as Ah Huat, he was responsible for over a thousand pigs at one point in time. The family painstakingly created their own pig feed and tended to the animals daily, making sure that they were always in the pink of health. 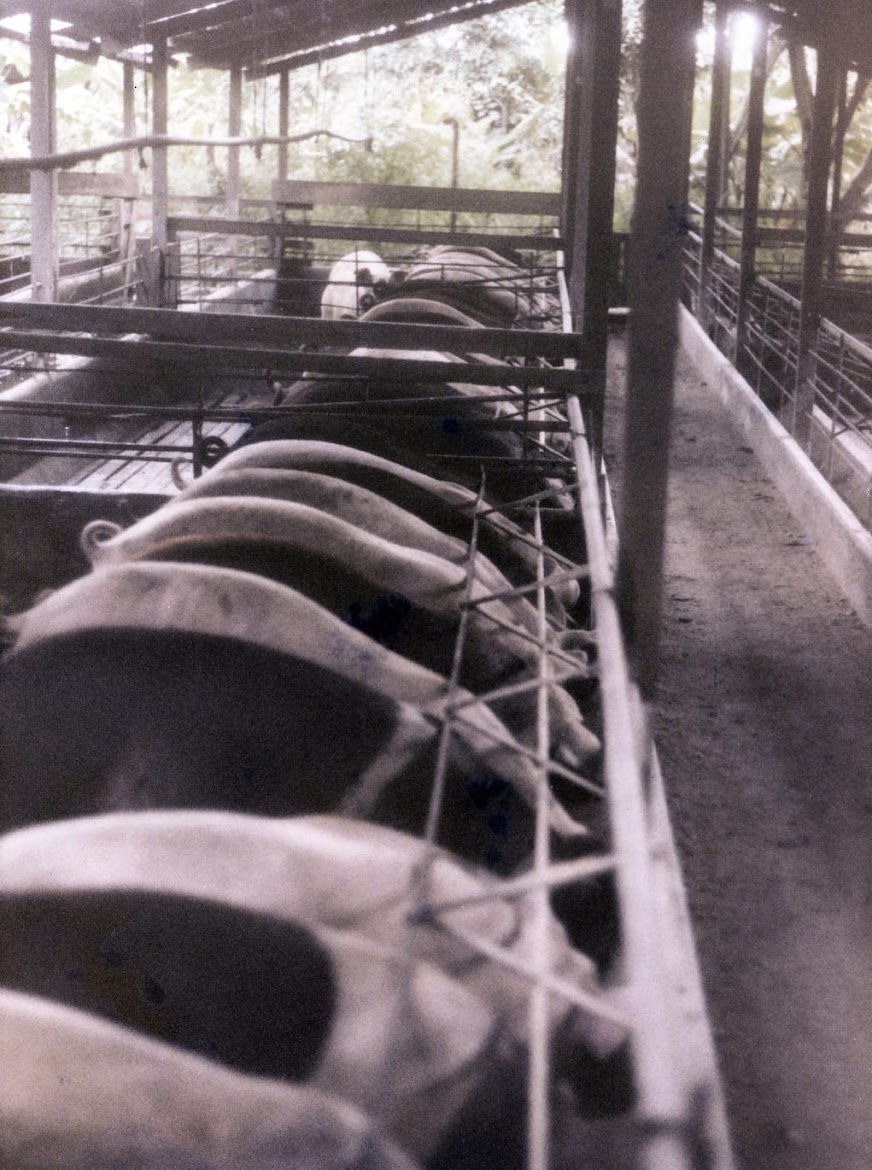 In the 1980s, when the government mandated that pig rearing was no longer allowed, the family sold the pigs. Together with his wife, Chun Fa ran a stall at Boon Lay Place Wet Market, selling fresh locally sourced pork. The pigs are slaughtered on Singapore shores, so the meat is fresher than supplies from other countries, where the pigs are first slaughtered and then exported.

A series of events in 2018 and 2019 led to the birth of Chun Fa Pork. “My mother was running the wet market business together with my dad for more than 30 years,” says Mabel. “It was very tough work with unforgiving hours, but they soldiered on. In 2018, Mom started feeling some discomfort and abdominal bloating. Initially, we thought it was just some gas, but the discomfort did not go away. She consulted two different GPs, both of whom prescribed medication that did not help. We switched to a third GP who conducted a battery of tests, and he confirmed the grim news – Mom had abnormally high CA19-9 levels, which were indicative of pancreatic cancer. She passed away just three weeks after that diagnosis.”

The shock of her mother’s sudden passing reverberated through the family. It was hardest for her father, as her mother had been not only his wife and companion but his helper for decades.

“My dad returned to work at the stall. It was difficult for him to do it on his own, and he tried multiple times to hire help, but all the people he hired didn’t stay long,” recalls Mabel. “I would help him whenever I could, but I had my regular day job and could only help out in a limited capacity.”

Mabel and her husband Daniel knew that they had to take care of her father as he was growing older and becoming tired of running the business single-handedly. He began talking about retiring altogether, even though he was unwilling to close down the stall and hoped someone would take over and continue this family business.

At the same time, business at the physical stall was dwindling. A typical wet market operates in the first half of the day, and is usually closed by the time most people end work in the evenings. Given shifting consumer shopping habits, the family realized that the business would cease to be profitable if it did not modernize. Since she was a little girl, Mabel helped out at her parents’ stall. In 2019 she began learning the ropes from her father

“We had a very good product, but we needed to upgrade the platform,” Mabel explains. “There was a great opportunity in a new space full of possibilities—the digital space. People could shop for fresh wet market pork at any time of the day, and receive it at their doorsteps.”

Knowing there was a chance to turn the tide around, she began to pray. “During that period in mid-2019, as I spent time in prayer, I received a vision of a business logo. It was a caricature of my dad smiling with his two thumbs up. God began to give us inspiration and ideas to bring my dad’s business to the next level by going digital.”

With almost zero business experience to speak of, Mabel and Daniel consulted their cell group leaders Rick and Sherie Quek, both of whom are successful leaders in the marketplace, tapping on their business wisdom and foresight to see if the vision for Chun Fa Pork could take flight. The response they received was encouraging.

TAKING THAT STEP OF FAITH

It was in February this year that Mabel and Daniel decided to take a leap of faith and push ahead with their business idea.

Mabel shared: “During my growing up years, I remember being dragged to the market to help my parents out in their business. I say ‘dragged’ because the young me was not the best helper; market work was both rough and tough! My parents had to leave home at 3am, and put in 12, 13 hours of work a day. During peak seasons like Chinese New Year and public holidays, they would sleep as little as three hours daily. Though I found the work tough back then and was never quite the willing helper, I’m now thankful for the years of practice I had working alongside my parents. The skills I learned have stayed with me to this day—that’s made it much easier for me to pick up this business.”

As the third generation of this family business, Mabel states the methods may be different but their mission stays the same: to bring fresh, healthy pork from the market to the table.

“Our vision is to preserve these time-honed skills and expertise in giving customers the freshest pork for them and their family. There is a skill set needed to ensure the quality of the different cuts, and my dad has painstakingly taught us all that he knows,” she explains.

“Our expertise lies in making sure only the best quality pork passes through our hands to our customers, and it is really rewarding to know that something we provide is nourishing people. To sit down to a warm home-cooked meal with good quality meat is such a warm blessing! This is also the inspiration for Chun Fa Pork’s tagline: ‘Market Freshness, Homely Goodness’.” 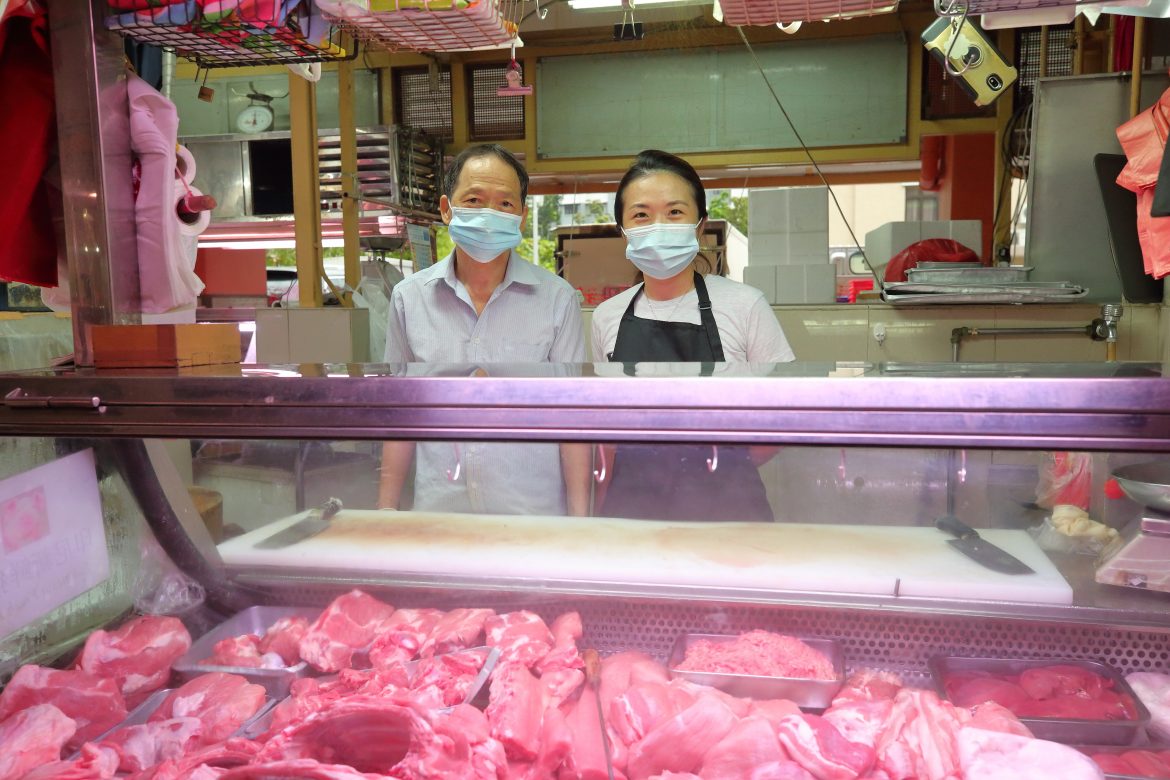 Mabel and her father at their stall at Boon Lay Place

Chun Fa Pork was officially launched in April this year, right in the middle of Singapore’s Circuit Breaker. As people were confined at home, demand for fresh pork delivery began to increase rapidly.

“The initial start-up phase of our business was really tough,” she recalls. “We had to set up the entire system from scratch and figure out how to do everything from marketing to invoicing, delivery systems and customer management. We took our own photos, designed the business logo, and also ensured we had all the proper licenses in place. We never knew setting up a business required so many elements!”

While COVID-19 did not affect Chun Fa Pork’s supply chain, “we had to source for new suppliers on our own as prices were inching up, and as far as possible, we wanted to avoid passing on the price hike to our consumers. That’s how we have maintained competitive prices.”

As the country shifted to Phase 2, they found demand dropping, “but we retained a good base of customers, many of whom helped us to spread the word too.”

A verse that Mabel has clung on to when things get difficult is Isaiah 40:28-29, “Have you not known? Have you not heard? The everlasting God, the Lord , The Creator of the ends of the earth, Neither faints nor is weary. His understanding is unsearchable. He gives power to the weak, And to those who have no might He increases strength.”

“When I’m discouraged I remember that God is always there, leading and guiding and strengthening me—and He never gets tired of doing that,” she shared. “And He will bless the work of our hands as we journey with Him in faith.”

As any good modern business does, Chun Fa Pork leverages on the power of social media to great effect. “We set up an Instagram page and collaborated with some experienced home cooks who posted up recipes using our meat,” says Mabel. “One thing that encourages us greatly is to see customers coming back again and again, and sending us photos of the delicious meals they created using our pork.” 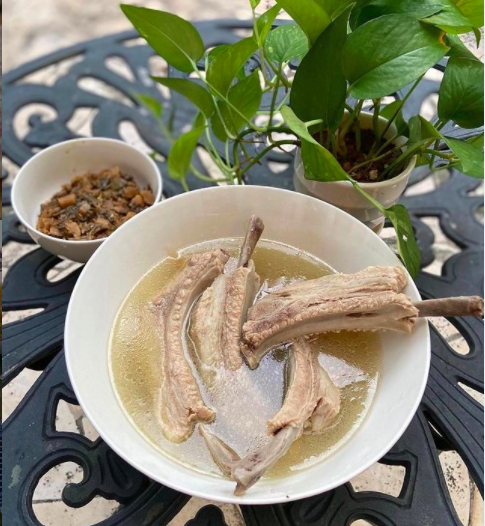 Chun Fa Pork offers free delivery for order above $40—deliveries are made four days a week: Tuesday, Friday, Saturday and Sunday. “My dad’s 65 and semi-retired, so he doesn’t open the stall every day. I work part-time in my day job from Monday to Wednesday, and spend the rest of my time on the business. On the weekends, I run the stall together with my dad . Daniel is the one who sends out all the orders after we prepare them at the stall.”

For the mother of two young girls, 2020 has not been the easiest year. “But God has been good, and His grace sustains me,” Mabel declares. “We are still learning and growing every day, and have a lot of ideas in the pipeline—our website is due to launch very soon!”

“We envision to build a business that is not profit-driven, but purpose-driven. Our goal is not just to make the dollar, but to make a difference. We are still figuring things out, but for the moment, I’m just very glad that my father is much happier and well-rested.”

Working with her father presented its challenges, she admits. “We had our fair share of conflicts when starting out, but we work quite well together now! He continues to share his skills and knowledge with us, and we are still learning from him.”

They have plans to expand into poultry, and at the same time, expand their team. “We will continue building this business and hopefully establish it into a sustainable business,” says Mabel.

Check out @chunfapork on Instagram if you’re looking for fresh, quality pork to uplift your family meals. Chun Fa Pork delivers four days a week; free delivery for orders above $40, and complimentary vacuum packing for order above $80.

Favorite cut of pork
I’m a huge fan of soup; I can take soup dishes every single day! My favorite pork part is the collar bone—it’s my absolute favorite cut for soup, because the meat is so tender it just falls off the bone. It doesn’t get tough even after long hours of cooking, and the bony parts sweeten the soup too.

Favorite pork dish
Our family favorite is char siew! It’s a very versatile dish, and different cuts can be used to make it.