Find A Need And Meet It: Chinese Service Visitation Ministry

Chinese Service started its Visitation Ministry in 2018. Ministry leaders Yong Kuan Wen and Siew Keefong tell us its origin story and how it continued serving the members during the pandemic.

It was five years ago when City Harvest Chinese Service’s member Siew Keefong first heard her cell group leader, Yong Kuan Wen’s vision for the Chinese Church Visitation Ministry. The 57-year-old homemaker felt led to join him in this ministry, and she became one of its six pioneering members. Today, the ministry has over 20 regular members, serving around 20 families.

As its name suggests, the ministry focuses on visiting and caring for members who are unable to attend cell group meetings regularly. Some of these are elderly members whose eyesight or physical strength are failing, and some have to care for their children and family. The ministry also visits those who have been admitted to the hospital.

The ministry is always evolving and finding new ways to bless the members that they visit. Recently, one of the ministry teams had an idea to present a painting with an accompanying verse to a member. With this, 57-year-old housewife Serene Tan got down to the task of painting. When she showed Kuan Wen her finished painting, they decided to make it a ministry project: Serene would paint and others would write the verses. What started as a simple idea to bless one member became a blessing for others as well. 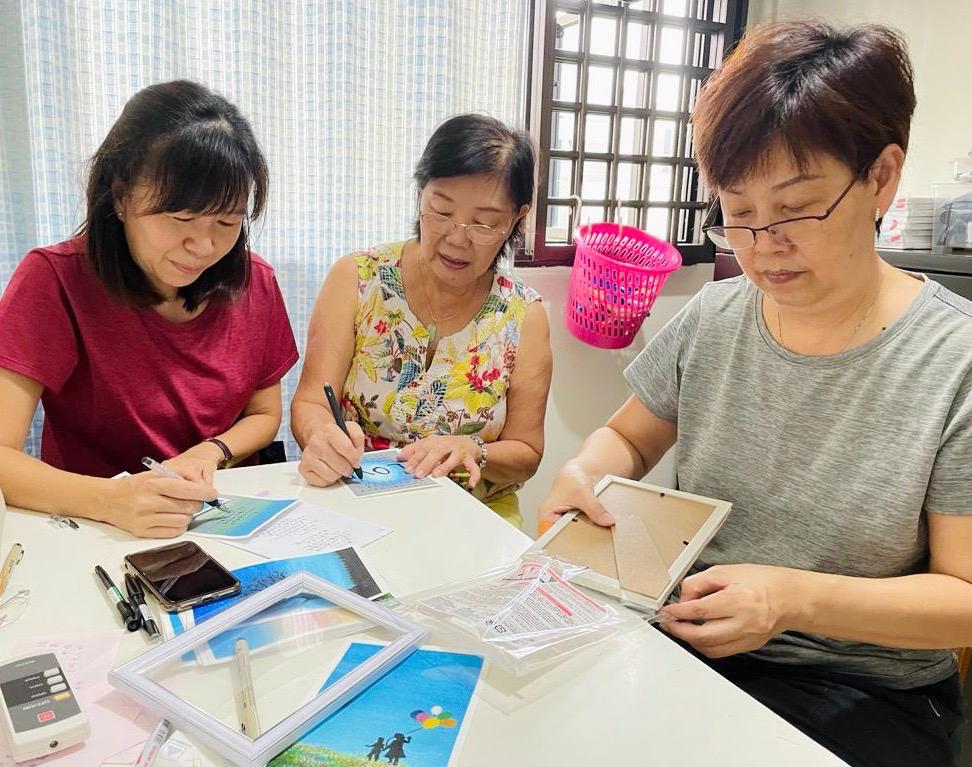 Serene (in grey) packing the paintings together with her fellow volunteers.

REACHING THE MEMBERS DURING CIRCUIT BREAKER

In April this year, the Circuit Breaker measures kicked in and all face-to-face communication came to a sudden halt. But that did not stop the ministry from reaching out to its members faithfully. The volunteers started “visiting” their members via phone calls or video calls, keeping in close contact and praying with them.

“Our vision and goal for the ministry has always been simple and clear; it has not changed,” said Kuan Wen. “Right from the beginning, we know that this would be a constant, long-term service to those whom we visit.”

When Singapore went into a partial lockdown, the members’ needs changed. One of her members, Grace, suffers from depression, and during the lockdown, Keefong observed that her mood swings fluctuated greatly. Before the lockdown, Grace was working as a part-timer, but she started to have a lot of fear during the pandemic. She was unable to deal with the unpredictability of the rapidly-changing situation during the Circuit Breaker and soon found herself unable to work.

“Usually, we would visit her once a month and occasionally communicate with her over the phone,” said Keefong. “However, during the Circuit Breaker, she would take the initiative to call me for a chat and share with me about her worries and concerns.”

Grace has no Wi-Fi connection at home and thus had no access to the online services and cell group meetings via Zoom. Keefong’s team began to spend more time with her over the phone.

The team of three would worship together with Grace, shared the word of God, and pray together with her. Grace would share that each phone call blessed her greatly.

When Singapore finally transitioned into Phase Two of the Circuit Breaker and social gatherings of up to five people were allowed, Grace was very excited to be able to meet the team to fellowship in person over lunch. 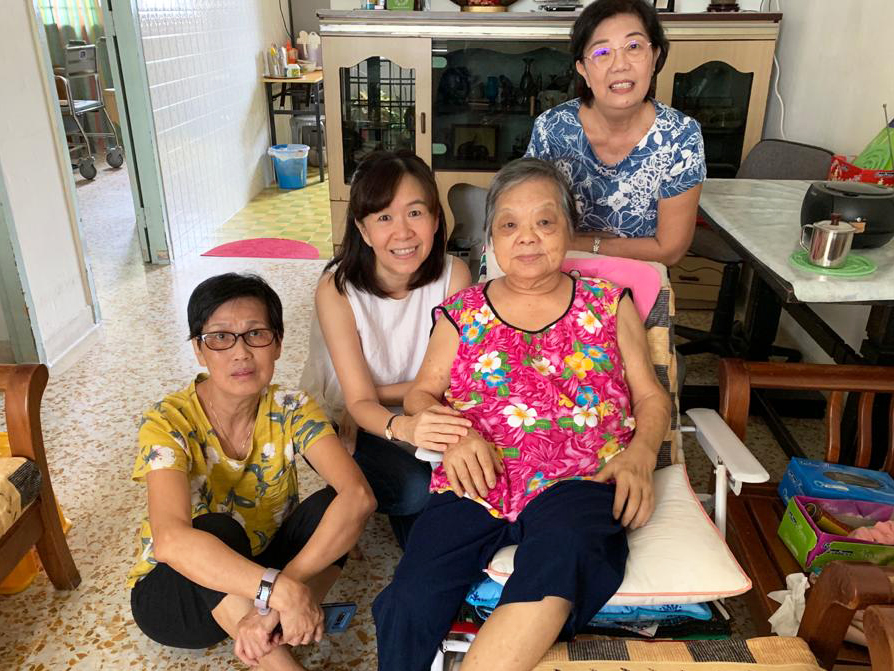 Siew Keefong (in white) during one of the visitations before Circuit Breaker started.

“She said she was really very happy, and also took a lot of photos during the meet-up for her keepsake,” said Keefong. She added that she was glad to be able to bring comfort and joy to Grace just by lending a listening ear during this difficult period.

“For members who are unable to go to church or attend cell group meetings, we become a bridge to bring them closer to the church, and bring them into fellowship with other sisters and brothers in Christ,” says the ministry member.

Keefong never imagined that she would ever serve in a ministry that requires her to constantly meet others. She shared that she used to be very timid, as her mother was very protective of her and her siblings from a young age. Visiting patients at hospitals or going to funerals were unheard of.

However, when Keefong was in her 30s, she received a revelation at a prayer meeting. She witnessed a pastor praying for a woman and she sensed that the woman was in bondage and seemed emotionally distressed. After the prayer, the woman appeared to be released from bondage. In that moment, Keefong understood something.

“I realized that God needs a vessel and He is not just looking for someone who is talented. When one is willing to become a vessel, God can work through the person to bring prayers, comfort, and companionship to another person,” said Keefong. “I decided then that I want to become a vessel.”

THE START OF THE CHINESE CHURCH VISITATION MINISTRY

Chinese Service’s visitation ministry birthed out of a crisis that Kuan Wen faced. In 2012, he was appointed as a sub-zone leader, leading one cell group and supervising three other cell groups. But soon, he found himself unable to fulfil his duties because of all his work and family commitments.

He soon felt that he was unworthy of his position and often sought God in prayer. When there was no response from God, Kuan Wen continued to persevere. He became even busier when his third child was born in 2013 and had no capacity to visit his members or conduct Bible study sessions. Yet, he was torn because he believes that every Christian is called to serve, even busy parents.

One day, Kuan Wen heard God spoke when he was praying, “It’s not about you being worthy to serve me, but about Me being worthy of your service.”

“In that instant, all the guilt and shame in my heart completely disappeared, because the Lord had taken the burden off me!” God also told Kuan Wen that he did not have to do everything by himself, and there were others in his sub-zone more suited to certain duties who are able to assist him.

On 20 July 2015, Kuan Wen started the visitation ministry within his own pastoral zone. As a start, the team of six visited six families. The ministry’s vision in Mandarin reads: “With one heart, touching people’s hearts”. The scripture behind this vision is Philippians 2:4-5: “Let each of you look out not only for his own interests but also for the interests of others. Let this mind be in you which was also in Christ Jesus.”

Kuan Wen explained that the ministry was established with two clear purposes. Firstly, it aims to lighten the load of the cell groups by providing pastoral care to those who need to be visited. He came to realize that it is not realistic to expect every cell group to have the resources to do visitations. If a cell group’s leader is too overwhelmed by his personal commitments and there are no other suitable member that can take on the task, the visitation ministry will step in to give practical help.

Secondly, it aims to mobilize the retirees and homemakers, who are spiritually mature and approachable, to serve. They are actually the best candidate to do visitations. Every time they visit a member, the ministry members would also learn to connect with each other and serve each other.

“This is also a way to ‘share all things’, just like what the Bible taught us. The ministry helps to draw out capable and talented members from each cell group to come together to help other cell groups in need,” Kuan Wen said.

The visitation ministry officially became a Chinese church ministry on 21 October 2018. It now serves the entire Chinese congregation. Before the Circuit Breaker started, the ministry members would visit about 20 homes per month in groups of three, not including impromptu hospital visits.

“This is just the beginning, and we still have a lot to do,” said Kuan Wen. “May God bless us, so we can grow in faith, love, and knowledge to better serve His church.”