Being told their son has Williams Syndrome, a rare heart condition, launched Frankie Lim and his wife Swee Pei on an emotional rollercoaster for years, but they stood on the promises of God and raised Luther as normally as his three siblings.

Frankie Lim, 50 and his wife Swee Pei, 45 are parents to four children: Lenny, 15; Linus, 10; Lara, 8 and Luther, 5. The couple own a company, Connectiv.Asia Pte Ltd, which Frankie runs; Swee Pei handles the company finances and is also a “homeschooling stay-at-home mom (SAHM)”.

Homeschooling four children alone is a task that would make most parents break out in a cold sweat, judging from the pain and suffering brought on by nationwide Home-Based Learning earlier this year due to the pandemic. For Swee Pei, homeschooling became the best way to manage her children’s schooling while catering to Luther’s social needs.

Shortly after birth, Luther was diagnosed with Williams Syndrome, which affects only about 30 children in Singapore. “It was during his fifth-month regular check up at the polyclinic that the general practitioner heard a heart murmur. This led us to see a cardiac specialist at KKH who told us straight away Luther has Williams Syndrome. Of course, we didn’t believe him, but after a blood test, it was confirmed,” said Swee Pei. 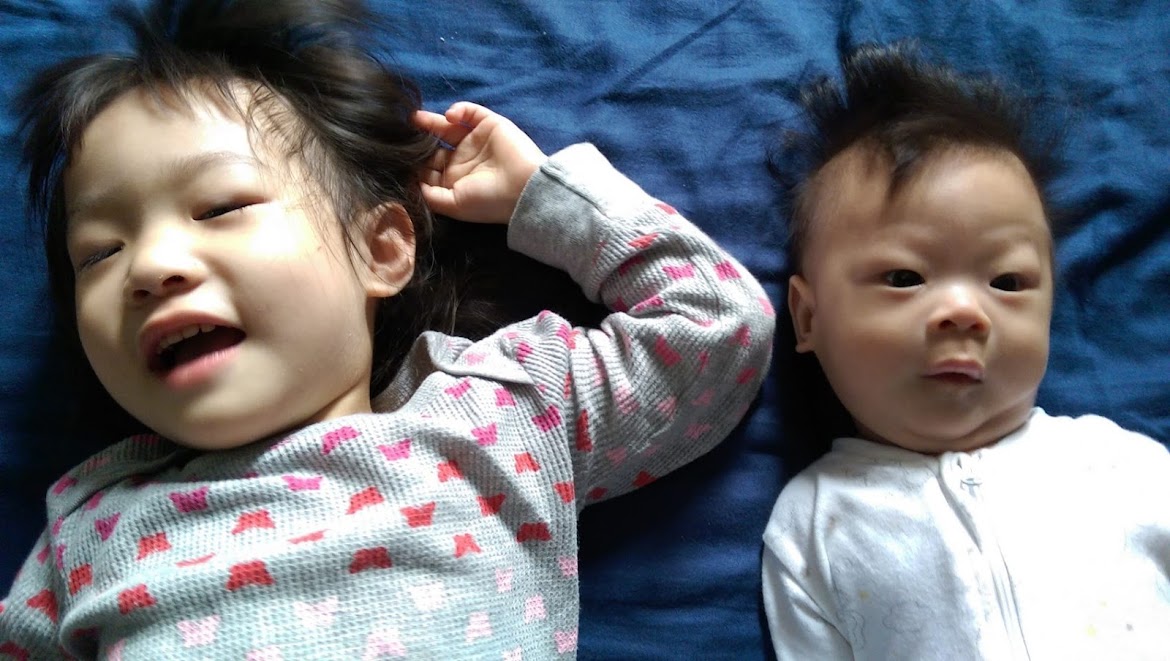 Luther at six months with his sister Lara

“For the next two years, we would have regular check-ups for his heart, wondering if the moderate narrowing issues of his heart vessels would worsen; and the kidney, thyroid and calcium levels. All these were signature symptoms of a child with Williams Syndrome. Luther’s developmental growth was also way below the normal range,” Frankie said.

In the beginning, the Lims found it hard to accept Luther’s diagnosis. “I had so many questions that popped up on my mind; there was a certain degree of self-blame: Was it our fault? Our past sins? Was it due to our aging bodies thus we can’t have a normal child? How is he going to have his own family next time? How is he going to take care of himself when we are no longer around?” Frankie recounted.

It didn’t help when strangers would come up to them and ask, “Your child not normal is it?” It seemed like all they heard from doctors was bad news. “The early visits for all his therapies and check-ups at KKH were painful, bitter and tiring,” said Frankie. 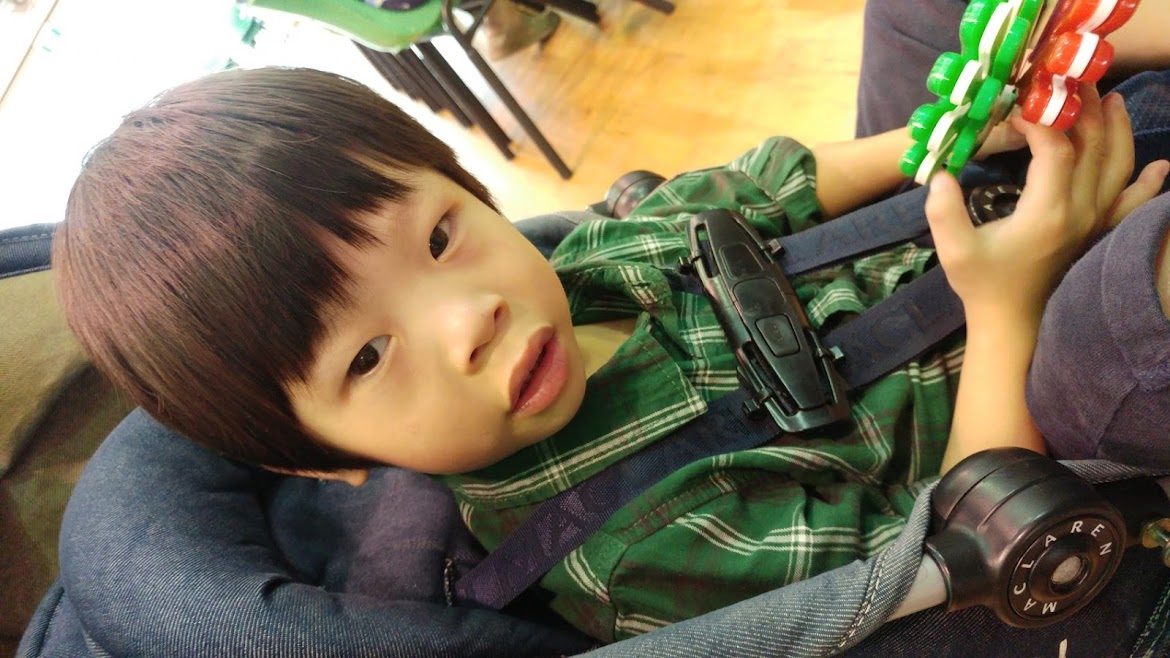 Luther at age 4 and 9 months

Swee Pei added, “After every session, the therapist or doctors would tell us how weak Luther was in this and in that—it made me feel like Luther will never have a future. We would get home feeling emotionally drained and we would break down from time to time.”

Luther’s doctors even suggested extracting six teeth and discussed puncturing Luther’s ear drum when he was two, but the Lims were not convinced of these steps and chose not to go ahead. “We are glad we did not do it after seeking a second opinion, as suggested by the Williams Syndrome chat group,” said Frankie.

The pressure of raising a special child is usually buffered by family support, but Frankie and Swee Pei did not have the privilege of this.

“They said something like ‘What have you all done to have a special kid like that?’, as if it was retribution,” shared Frankie.

“My dad attributes Luther’s diagnosis to my ‘poor health and choice to breastfeed all my kids’,” revealed Swee Pei. “Ironically, both my dad—my mother is with Jesus—and in-laws dislike us having so many kids. They seem to blame us—our abilities, circumstances, choices—for whatever is not going right for us or for them. We had to deal with the heartache of our parenting thinking we were not fit to have more than one or two children.” 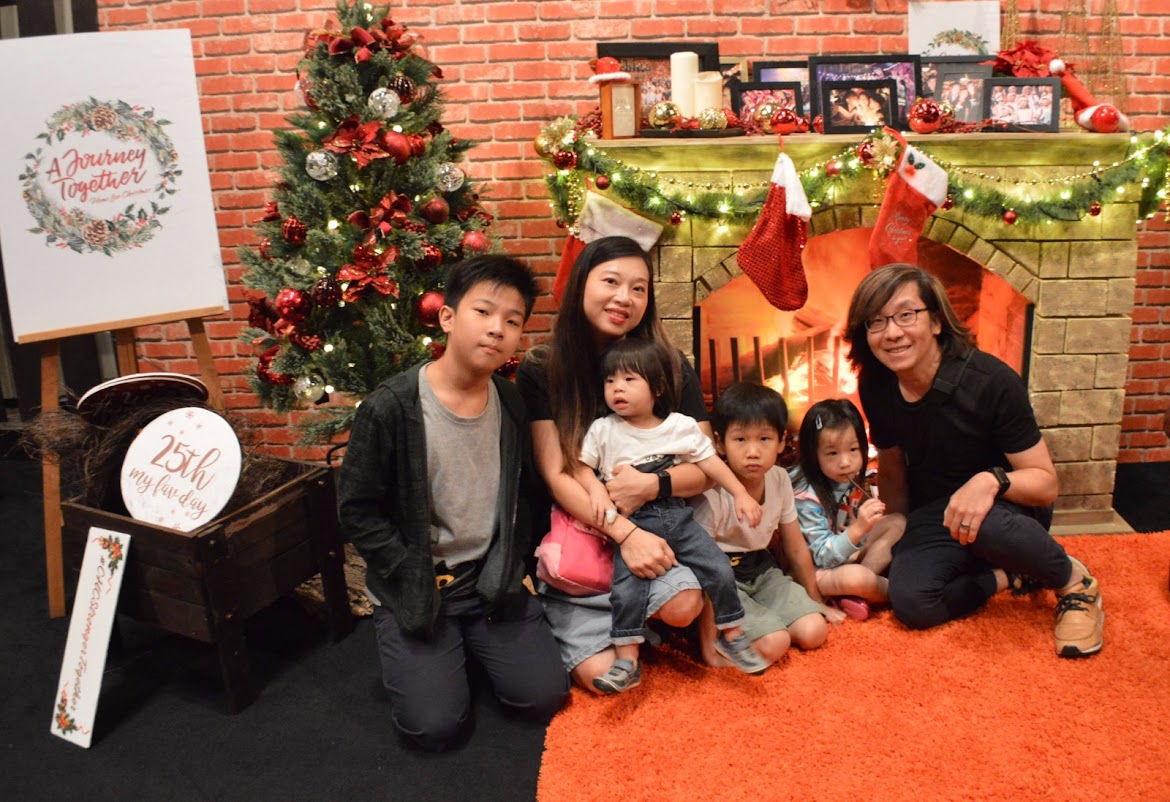 Through the years, the couple has learned to honor their parents “instead of talking back. Likewise, they grumble less in front of us, but their ideology is still unchanged. Emotionally, we are learning to cope with their constant negativity, but one day of bringing them for medical appointments can wipe both of us flat out!” she laughs.

That said, it was thanks to Frankie’s parents that the couple met. Frankie used to attend City Harvest Church as a youth, when it was still Ekklesia Ministry, but his parents, who were non-Christians, insisted he went to a “proper church” instead. He obeyed them—and met Swee Pei. They returned to CHC in 2009, when Lenny was 3.

PRAYING CIRCLES AROUND THEIR CHILDREN

“Before his diagnosis, when Luther was only a month old, I read Praying Circles Around Your Children,” recalled Swee Pei. “I wrote a vision for each of my kids, including Luther. Looking at the vision statements now, I am beginning to see glimpses of what I prayed, in each of them. For Luther, it was that he would be ‘a man of God for the glory of God, reaching out and meeting the spiritual needs of the lost and needy with zealousness!’ To me, these prayer circles for my God-given children, including Luther, are a signpost of how, despite the difficulties, God will be faithful to His Word.”

“Initially, our family would always pray for Luther to get well; it was like a ritual,” she added. “During the early part of the journey, I would also often go up for prayer with Luther at church, hoping for a miracle.”

But it became hard to believe in their prayers when they faced a continuous stream of extreme challenges for a number of years. “The first three years were a constant cycle of reminders from the doctors and therapists of our ‘helpless’ situation. Frankie, Luther and I took turns melting down after every hospital visit, amidst a season of Lara and Lenny falling with asthma, having to be hospitalized.” The kids faced dental issues, rotavirus and HFMD infections, and Frankie had a pre-slipped disc, after he resigned from his job following a 50 percent pay cut.

Throughout all this, Frankie and Swee Pei clung on to their faith. 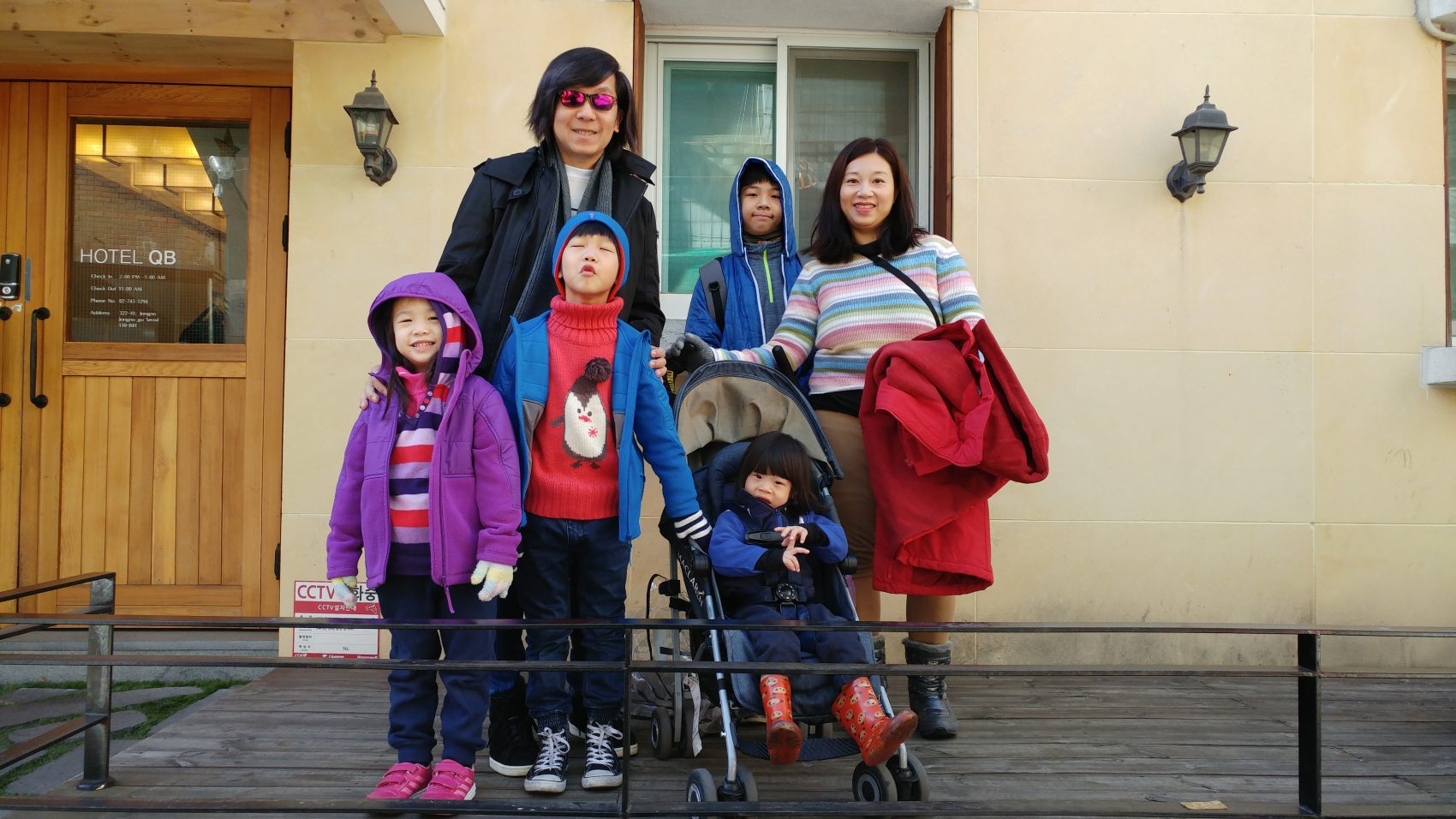 “I have learned and accepted that Luther is a gift from God, and no matter what others have to say about him, or label him a handicap, including our own parents, we should stay firm by him, support and protect him, and not be affected by what the world has to say about him,” said Frankie. “Though Luther is labelled ‘special’ by the world, he is still unique and precious in God’s eyes. I am proud of Luther and how far he has walked the journey with the family.”

Swee Pei said she is still discovering “the revelations and promises from God as I continue to try to keep on keeping on in my walk with God through church, quiet time, reading Christian books and the Bible, as well as living out my roles I have been assigned—wife, mum, daughter, friend.”

While the miracle they initially prayed for did not happen, “we raised Luther just like his other siblings, never thinking he is not normal,” said Swee Pei. “His siblings are very loving and protective of him. They never complain about his special need. All of us treated him according to his age and ability.”

A FAMILY FULL OF JOY

Today, Luther is 5 and a half, the most sociable and polite of the four children who greets everyone, according to his parents. Between the ages of 1 and 3, “he would bite or scratch when he didn’t get what he wanted as he could not communicate and talk then. Harvest Kidz teachers would know best! It was actually quite bad but that season has passed,” said Swee Pei. “Nowadays, he is really just testing boundaries like a cheeky boy. His EQ is high, very manipulative in a funny way.” 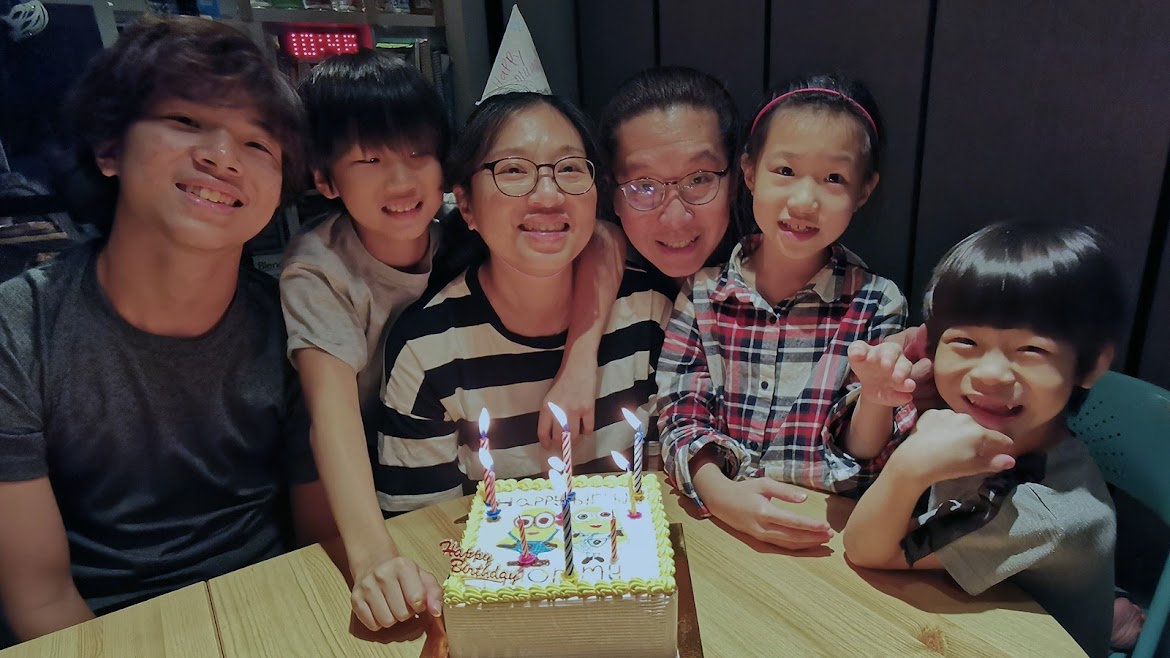 The family lives in a three-room flat—all four children share a room, and chores are all shared since they have no helper.

“Homeschooling helps us to spend time together more easily, and this was the key reason for us, in view of Luther’s high social need nature. Together, we do our meals, chores (we have no maid), exercise. We have Thursday supper nights, Popsical time (karaoke), board games, K Drama, with different ones handling different things. Frankie might do cooking, repair stuff and reno works in the home with Lenny and Linus or go cycling with Lara and Luther.”

One thing the family has enjoyed doing together is going on missions. Frankie and Swee Pei brought their four children on a mission trip to Siem Reap in September last year.

“Missions is something I believe we must all do as a follower of Christ. To do it with the family is a no-brainer to us as we believe in doing stuff as a family and what’s more, it is missions!” said Swee Pei. “To train them while they are young is powerful and effective. For the Siem Reap trip, we prepared for it together by gathering donations of useful things for the children in Cambodia. We also went for training and packing sessions in church with the rest of the trippers. We also prepared a song and testimony as a family for the trip, which we shared in a village and a church. Linus keeps talking about going back there. We all had a positive trip experience.” 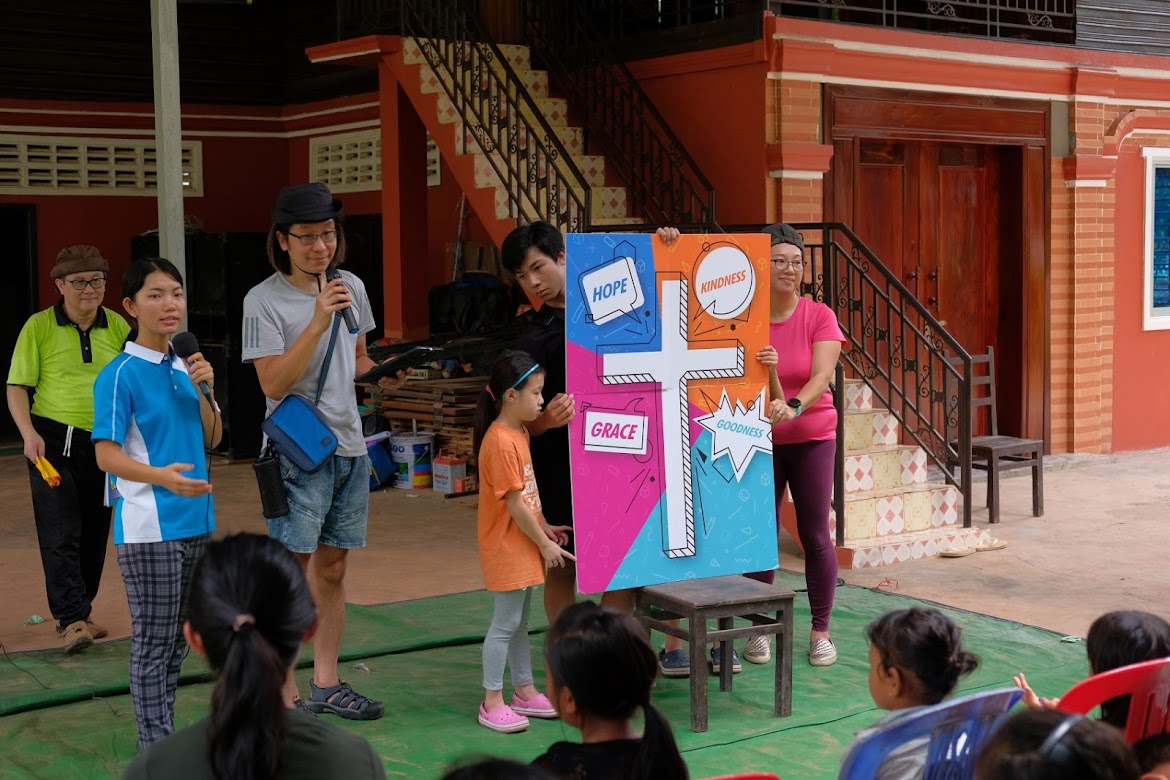 The family has a newly crafted vision: “To God be the glory”. Swee Pei said, “These two verses neatly sum up how we want to achieve our family vision: Zechariah 4:6, “Not by might nor by power, but by my Spirit,’ says the Lord Almighty” and Revelations 3:8, “I know your deeds. See, I have placed before you an open door that no one can shut. I know that you have little strength, yet you have kept my word and have not denied my name.”

Frankie shared, “Our desire is for our children to grow up close knitted and have a happy childhood and grow up healthily—for Luther it is that the health threats that he faces will not come to pass— most importantly, that they will love God.”

To parents of children who are different, Frankie and Swee Pei have these encouraging words, “Do not dwell too much in the negativities the world may portray about your child. Enjoy growing with the child, take things a step at a time. Remember that when no one else understands you, God does. Lean more on God.”