Giving an account of how Jesus honored His siblings and His cousin, John the Baptist, Pastor Kong Hee taught that it is important to honor those in our family.

“There’s an old saying, ‘Charity begins at home’,” said Kong Hee, the senior pastor of City Harvest Church as he began his sermon. “So the practice of honor must start in our family.”

Over last weekend (Oct 17 and 18) Pastor Kong studied how Jesus honored his siblings and his cousin, John the Baptist, building upon his sermon series on the spirit of honor. He focused on the importance of resolving the problem rather than blaming the person.

JESUS HONORED HIS SIBLINGS
Drawing from Mark 6:3, the pastor postulated that Jesus, being the oldest child, likely took over the family business following His earthly father’s death, and supported his family, which included four brothers—James, Joses, Judas and Simon—and at least two sisters. However, none of his siblings defended or protected Jesus when the people in their hometown grew hostile against Him and His ministry.

In the third year of Jesus’ ministry, the Jews sought to kill Him and Judea became a very dangerous place for Him. The Feast of Tabernacles was held in Jerusalem, which was in Judea; as a devout Jew, Jesus had to attend the feast. Not only did His brothers not understand His situation, they openly mocked Him and goaded Him to show Himself to the world. John 7:5 recorded that they did not believe in Jesus and showed no support for His ministry.

Pastor Kong went on to observe that even as Jesus hung on the Cross, none of His siblings were present–they had abandoned Him at the hour He needed them the most. The pastor postulated that they might have been disappointed and angry because of the shame Jesus had brought to their family. “Isn’t it true that the people who hurt us the most are usually the same people we love the most?” asked Pastor Kong. However, Jesus was never angry with His siblings and He always forgave them. After His resurrection, Jesus visited James, the second child in His family, even though James had been harsh and cynical towards Him (1 Cor 15:7). This act had such impact on James that all Jesus’ brothers and sisters repented and committed themselves to follow Christ for the rest of their lives.

Reading Acts 1:13-14, Pastor Kong described how Jesus’s brothers and Mary joined the 11 disciples in the upper room where they were praying. James eventually became the senior pastor of the church in Jerusalem (Gal 1, 2). Paul personally spent time with James and considered him a pillar of the Early Church.

Jude, possibly Jesus’ youngest brother, also became an apostle and wrote the Epistle of Jude. Once he was ashamed of Jesus, but in his letter, he called himself a bondservant of Christ. This reveals the reconciliation and restoration between him and Jesus. Jesus’s siblings loved Him in the end because He first unconditionally loved and forgave them.

MANAGING SIBLING RIVALRY
“Sometimes there can be jealousy and competition among brothers and sisters. This is not unusual,” Pastor Kong pointed out. Sibling rivalry dates back to the first two brothers of the Bible: Cain was so jealous of Abel that he committed the first murder in history (Gen 4:8). The story of Jacob and Esau, and Joseph and his brothers were all sad examples of sibling rivalry. 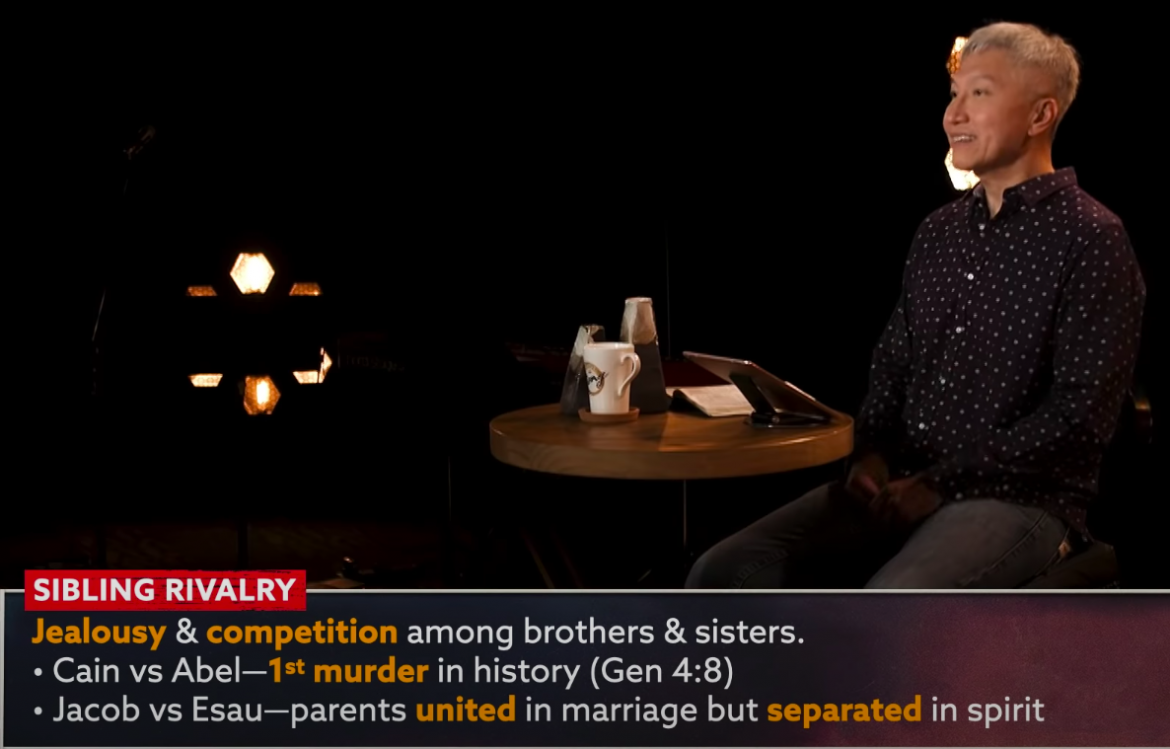 Jesus said that the two most important commandments are to love God wholeheartedly and to love one’s neighbor fervently. “’Neighbor’ means those physically nearest to us, and no one is physically closer than our own brothers and sisters at home,” the pastor said. “Our relationship with our siblings will be the longest relationship in our lives.”

Preaching from Matthew 5:22, Pastor Kong noted that there are severe consequences that await those who verbally attack their siblings. “Conflict is a part of life,” he said. “Whenever something goes wrong, one’s first reaction is often to blame others, which will only cause a chain reaction with the other party getting defensive and lashing back.”

Pastor Kong advised the church to not use words like “always” and “never” during conflict because these words are seldom factual—they only serve to make the other party feel condemned. “Try to be factual and keep the focus on the present situation,” he taught. “When we focus on the problem and do not attack the person, we are using the situation as an opportunity to help someone be smarter and wiser, and how to be more efficient, more effective, to be better the next time.”

He went on to emphasize the importance of reconciliation with reference to Matthew 5:23, highlighting that Jesus finds that it is more important to reconcile than to perform spiritual duties and one should live peaceably with all everyone as much as possible.

“But what if the anger is justifiable?” the pastor asked. Anger is a natural response when something unjust happens. However, while one cannot accept the sin, one must still love the sinner. Ephesians 4:26-27 even teaches “do not let the sun go down on your wrath, nor give place to the devil.” When one holds on to anger longer than it is reasonable, it will become an open door for Satan to wreak havoc in their lives.

Pastor Kong taught the church to be gracious even when they are upset. Ephesians 4:29 teaches Christians to be edifying in their words even when provoked. “Why? Because we do not want to grieve the Holy Spirit of God,” he said, referencing Ephesians 4:30

Quoting 1 John 2:9-11, the pastor preached that a Christian’s love for his brothers and sisters is a measure of their walk with God. Verse 11 writes: “But he who hates his brother is in darkness and walks in darkness, and does not know where he is going, because the darkness has blinded his eyes”. He emphasized that if one were to lose love, he would lose everything.

1 John 3:15 adds, “Whoever hates his brother is a murderer, and you know that no murderer has eternal life abiding in him.” Pastor Kong explained that murder is an active form of rage while hatred is a passive form of rage. “Both are still rage and rage will rob us from inheriting eternal life,” the pastor warned.

JESUS HONORS HIS COUSIN
Although Jesus wasn’t very close to his cousin, John the Baptist, he still had the highest respect for him. Jesus humbled himself and submitted to John’s baptism ministry, giving him honor even though John was junior to Jesus in every aspect in ministry. God was delighted with Jesus’s spirit of honor and He spoke audibly from heaven (Matt 3:17).

When John was suffering in prison, he began to doubt that Jesus was truly the Messiah (Lk 7:19). When John sent two of his disciples to question Jesus, Jesus kept the conversation private, sending John a gentle word of correction instead than condemning him. Publicly, Jesus praised John. Pastor Kong emphasized that Jesus was not being hypocritical. He chose to correct John in private and honor him in public. Despite John’s doubts, Jesus believed that his cousin would never change his theology and his doctrines. Jesus was not exaggerating or lying; He chose to focus on John’s conviction.

“This will also be the story of all our lives,” said Pastor Kong encouragingly, sharing his belief that when Christians stand before God and the book of remembrance is opened, they will receive a glowing report from Jesus, because the discipline has already taken place, and when God forgives, He also forgets.

The pastor led the congregation in a prayer to develop the spirit to honor and forgive, just as Jesus did.