City Harvest Church’s Christmas production this year, Unboxing Christmas, unraveled time to bring the message that Jesus has come to redeem your past and bring you a glorious future. 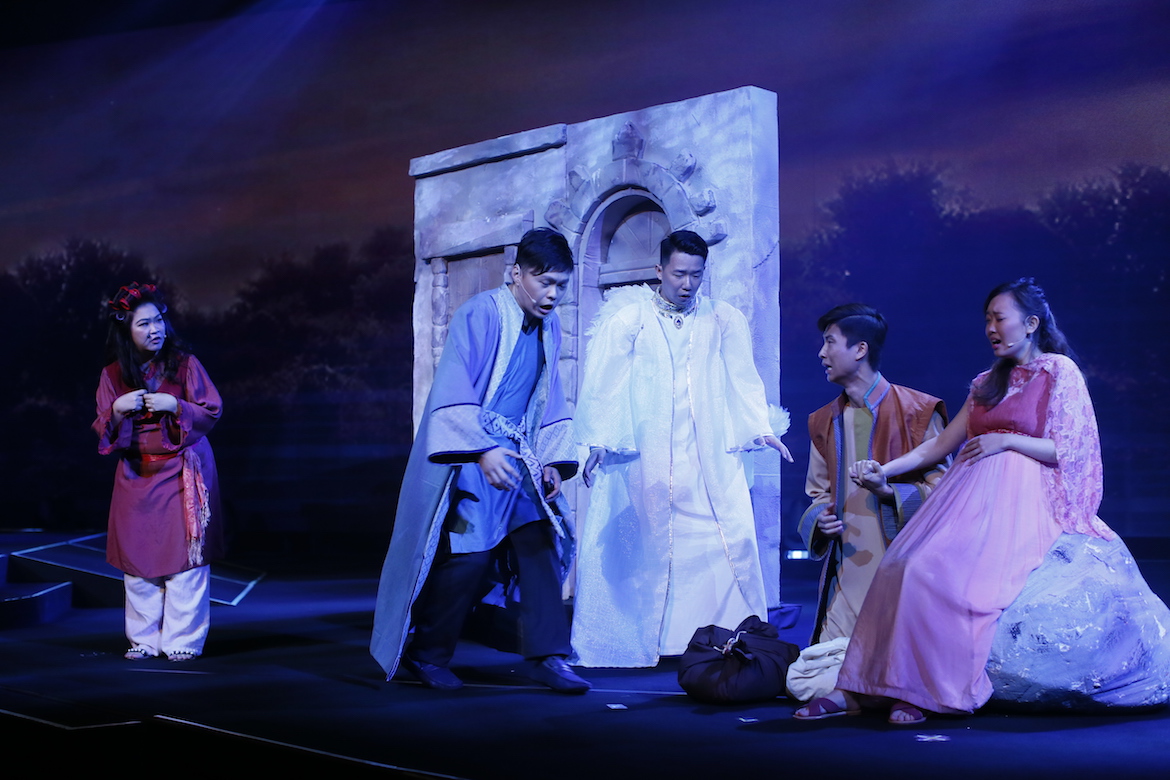 CHC’s Christmas service on Dec 21 and 22 opened with its annual drama production which posed this possibility: can going back to the past determine a person’s future? Inviting its audience to travel back in time to 1BC, Unboxing Christmas was a tale of restoration that spoke of brokenness and God’s redeeming grace in an engaging and entertaining manner.

David is a man who follows plans closely and see no reasons to take risks. After being dumped by his fiancée of seven years, David meets an angel who brings him back to the time before Jesus was born. He finds himself an accountant working for Joseph the carpenter (also Jesus’ earthly father) and goes on an unexpected journey, with the cheeky angel by his side. David finds himself in situations that force him to take risks. 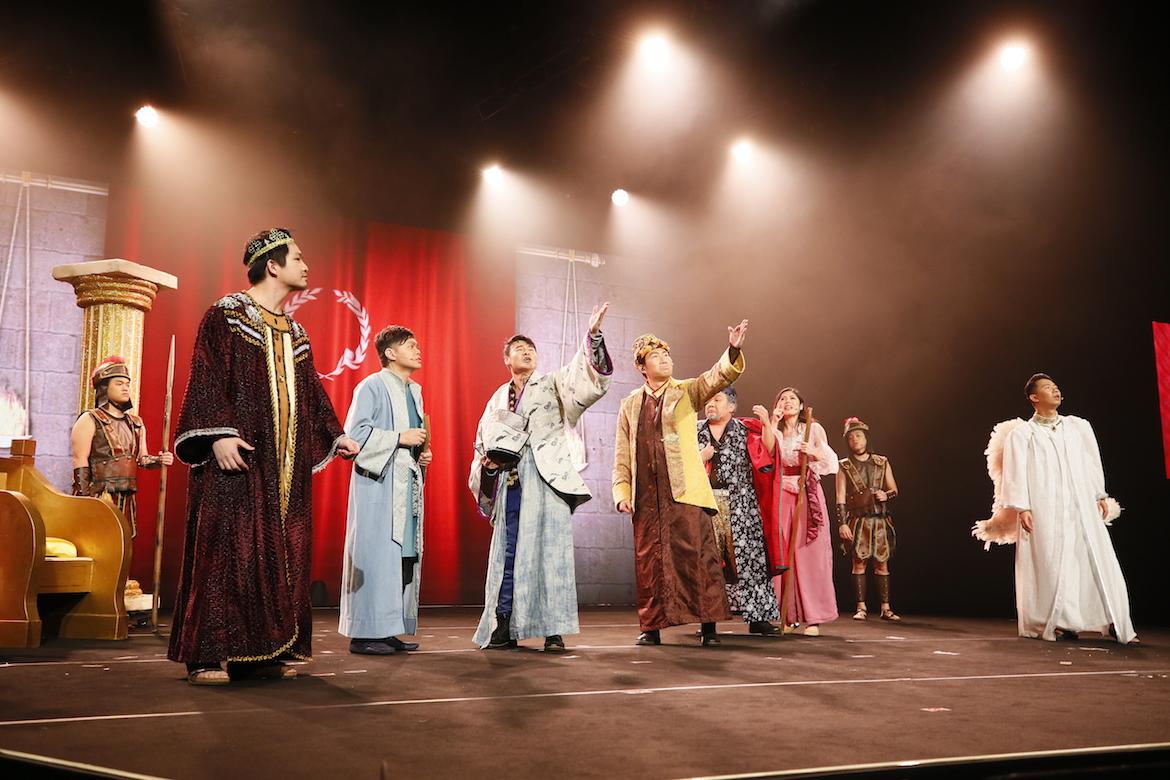 First, he has to mediate between King Herod and the three (dialect-speaking) wise men. Then, he has to travel across the desert with Joseph and his pregnant wife Mary, to get to Bethlehem for the census. He is tasked with finding them a place to stay. And then he has to distract the Roman soldiers sent by Herod so that they would not find baby Jesus.

In the process, David discovers the quick-witted, adventurous and free-spirited side of himself and learns that God uses every experience—good and bad—for His glory. After revisiting his childhood trauma with the angel, David finally resolves his fears and leaves the past ready to face his future. 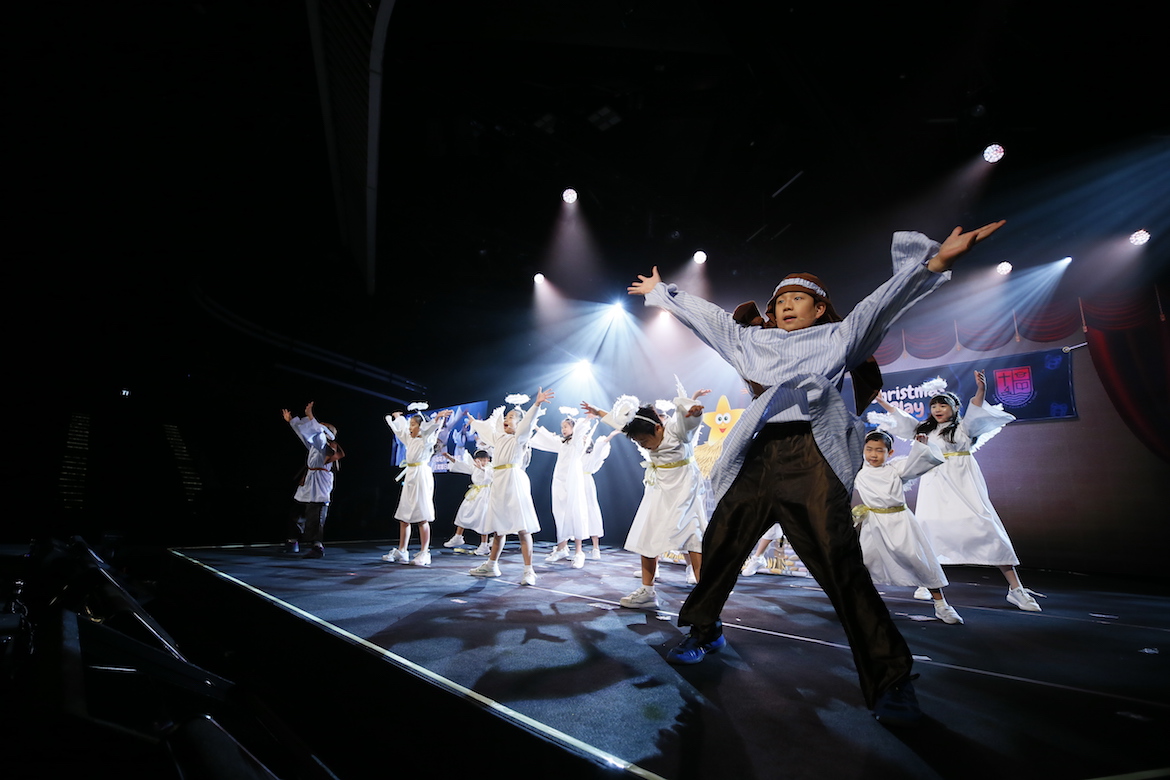 This heartwarming story was well-presented by the cast and backstage team of CHC’s Drama Ministry. For some, it was the best CHC Christmas drama in recent years: it featured a delightful song-and-dance by children from Harvest Kidz, three “heavenly Kings” and their hilarious antics, and professional jugglers and entertainers. With captivating visuals and stunning pyrotechnics, Unboxing Christmas was truly a memorable experience for all.

JESUS CAME TO GIVE MANKIND A BETTER ENDING

“Jesus came from eternity to time to meet us in humanity,” declared Aries Zulkarnain, CHC’s executive pastor, as he began his Christmas sermon. “No matter how bad your beginning was, Jesus can turn it into a glorious ending.”

In Isaiah 46:9-10, the Bible assures the church that the Lord knows the ending of every individual’s life. Jesus came down to identify with mankind and remind them that He will not abandon humans to struggle on their own but draw them to develop a relationship with Him. As it says in Matthew 1:23, Jesus is Emmanuel which means, “God with us”. 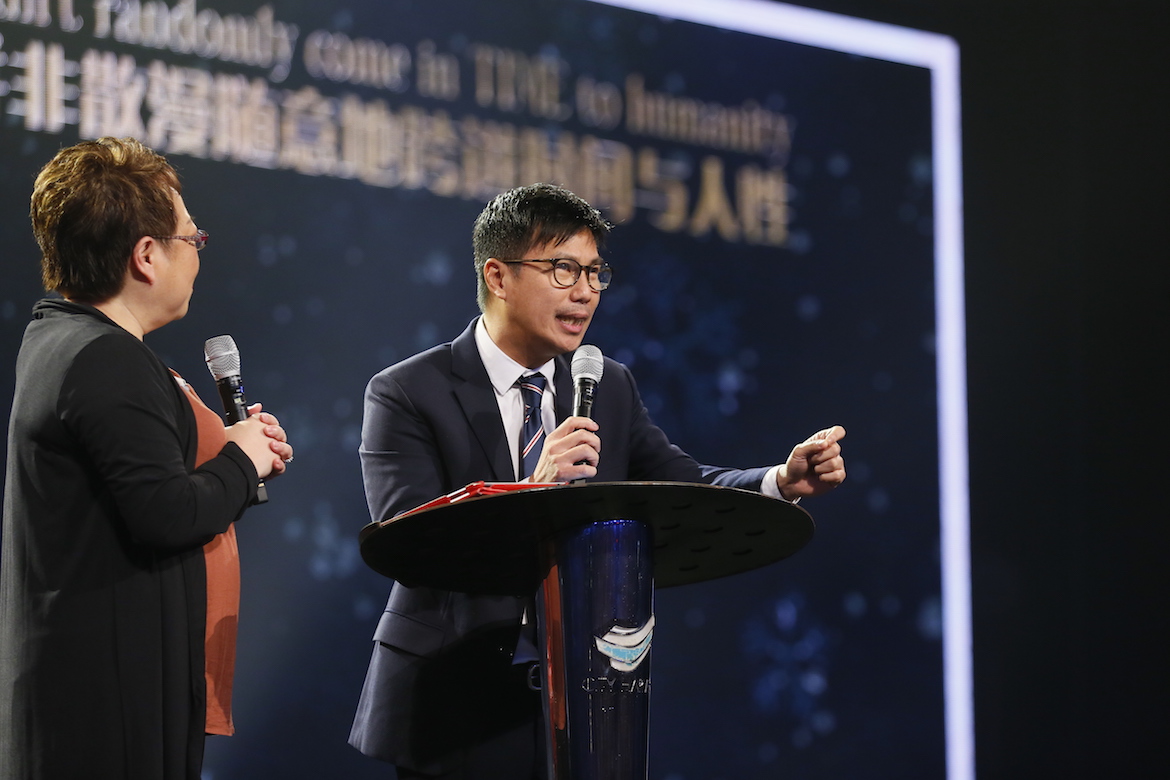 “Your ending will always be better than your beginning.”

Reading Luke 1:28-31, Pastor Aries told a story of how Mary was surprised by Angel Gabriel’s appearance, informing her of Jesus’s birth. People love surprises, especially during Christmas but not every surprise is immediately pleasant. What Mary was presented with seemed like suffering.

“Some of you have high hopes at the beginning but you encounter crisis after crisis,” describes the pastor. “The good news is, Jesus came from eternity and He wants to turn your sad beginning into a glorious ending.”

Lawrence and Sok Hoon are a couple in Pastor Aries’ cell group. They had been struggling in their marriage and finances for a long time, but kept it from their church family.

When the market took a bad turn, it landed Lawrence with unsettled bank loans from his investments. The debt caused a strain in their marriage and Lawrence became short-tempered and divorce would often come up in their arguments. Finally, the fights became unbearable and Sok Hoon asked for Pastor Aries’ counsel. Her complaint was that Lawrence was too invested in his work which turned him into an unloving husband. On the other hand, Lawrence believed that their marriage could only be sustained when there was financial stability.

“While most arguments are about the violation of rights, most solutions are about the acceptance of responsibility” said Pastor Aries. “Jesus came down to reconcile with us without having us to apologise to Him first because he took responsibility for our reconciliation.”

Over two years of mediation, God did a miracle. He spoke to Lawrence through different people and Lawrence started to shift his focus on worldly materials to things that are eternal: God, his marriage, and relationships. This revelation led him to commit to giving Sok Hoon all the commissions he earned. After a few months, Lawrence received numerous deals over months and God was never too late to provide for his family.

With Jesus, the ending is always better than the beginning.

OUT OF DARKNESS INTO HIS LIGHT

Moving on to his second point, Pastor Aries said, “Jesus came down to be with you, to bring you out of your darkness into His marvelous light.” 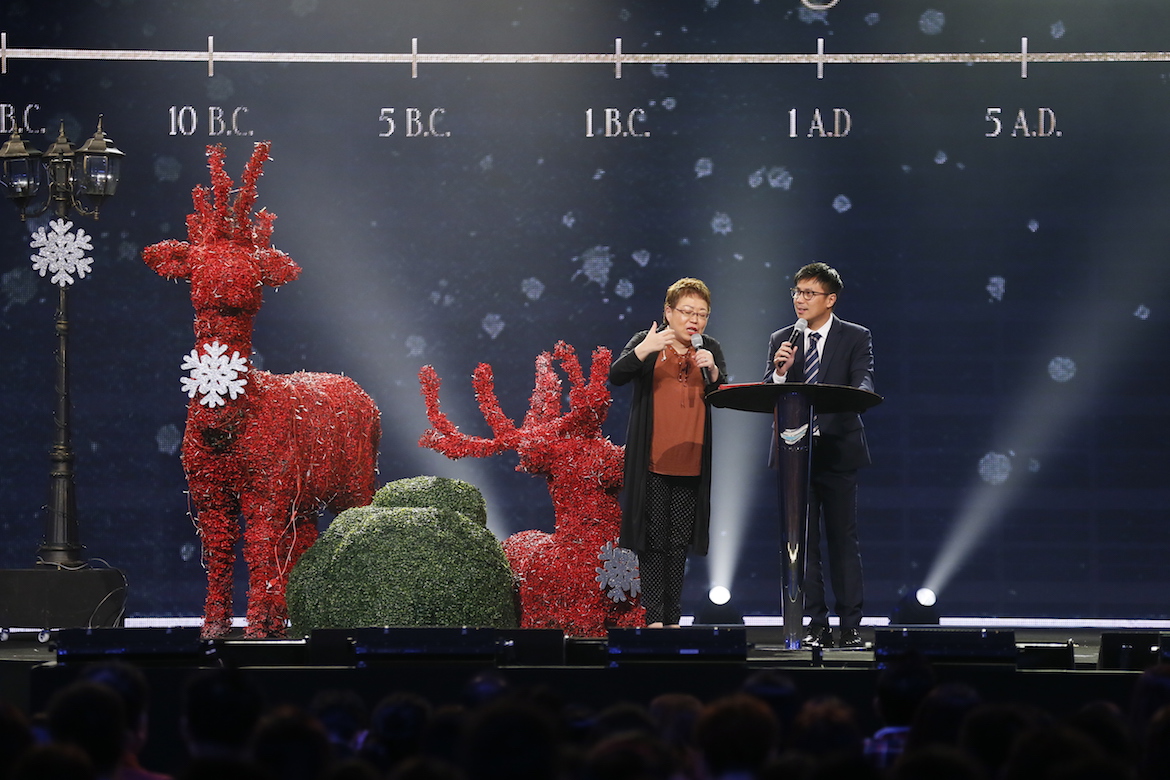 Pastor Aries preached that Jesus was born as a baby, instead of coming as a full grown man, because He had to live with mankind to understand their weaknesses and struggles (Hebrews 4:15).

“Christmas is a reminder that Jesus came to earth not just to take away your problems, but to be with you to bring you out of your problems and into His purpose.”

Dominic was brought up in a Christian family but growing up, he was neglected by his family. He grew up feeling unloved and unwanted, angry with an unfair God. He decided that God cannot be depended on, so he learned Muay Thai to be stronger. At the age of 11, Dominic joined a secret society to feed his urge to fight.

At 20, Dominic met his to-be wife Zining. To protect Zining, he left the gang and joined a culinary school to learn cooking. However, the darkness inside him had not left him. A gang member from his past came to settle a problem one day but the conversation turned violent. Dominic’s girlfriend tried to stop the fight but was pushed away instead by his gang member. Dominic was so provoked that he stabbed the gang member.

Miraculously, he was put on probation instead of being jailed. The couple eventually got married, but Dominic continued his lifestyle of philandering and drinking, finally turning violent towards his wife—she tried to take her own life.

At that breaking point, Zining remembered that she used to attend CHC, and contacted her ex-cell group leader, Ee Zhen Ying. After much persuasion, she managed to bring Dominic along to CHC’s Liberty Ministry.

The pastors and church workers prayed for Dominic and after much struggle, he was set free. He felt the presence of God come over him and realised that God had not forsaken him, but instead, he had forsaken God.

After receiving Jesus, Dominic was a changed man. He quit smoking, drinking and other bad habits, and opened a car rental business. Even though it did not do well in the beginning, he managed to sell the business and was made a partner with a good salary.

“Church, as long as you don’t give up, you will eventually see the purpose behind your pain when Jesus comes into your life,” said Pastor Aries encouragingly.

An altar call was held shortly after the sermon and many gave their hearts to Jesus. The Christmas season saw 1,318 souls being added to the Kingdom. 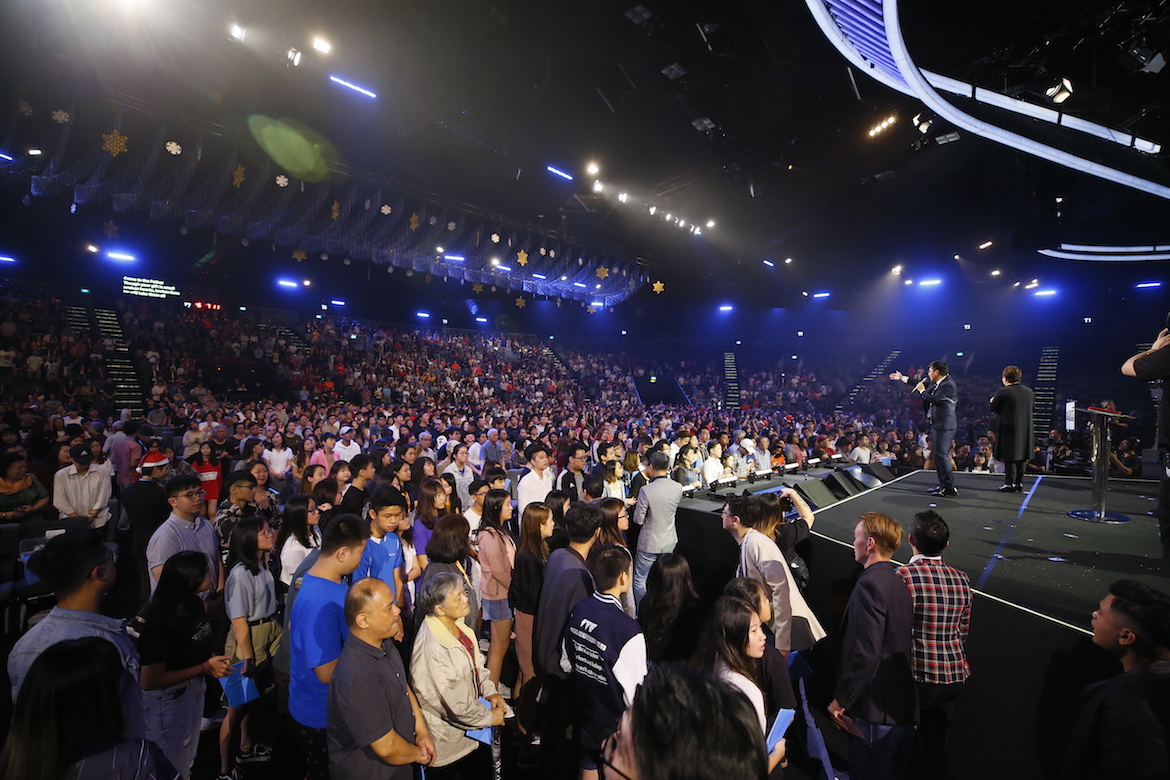