When you reach the end of the rope, get up and pray, commanded George Tiong, senior pastor of Kuching Harvest Church when he preached at CHC’s Chinese service earlier this month. 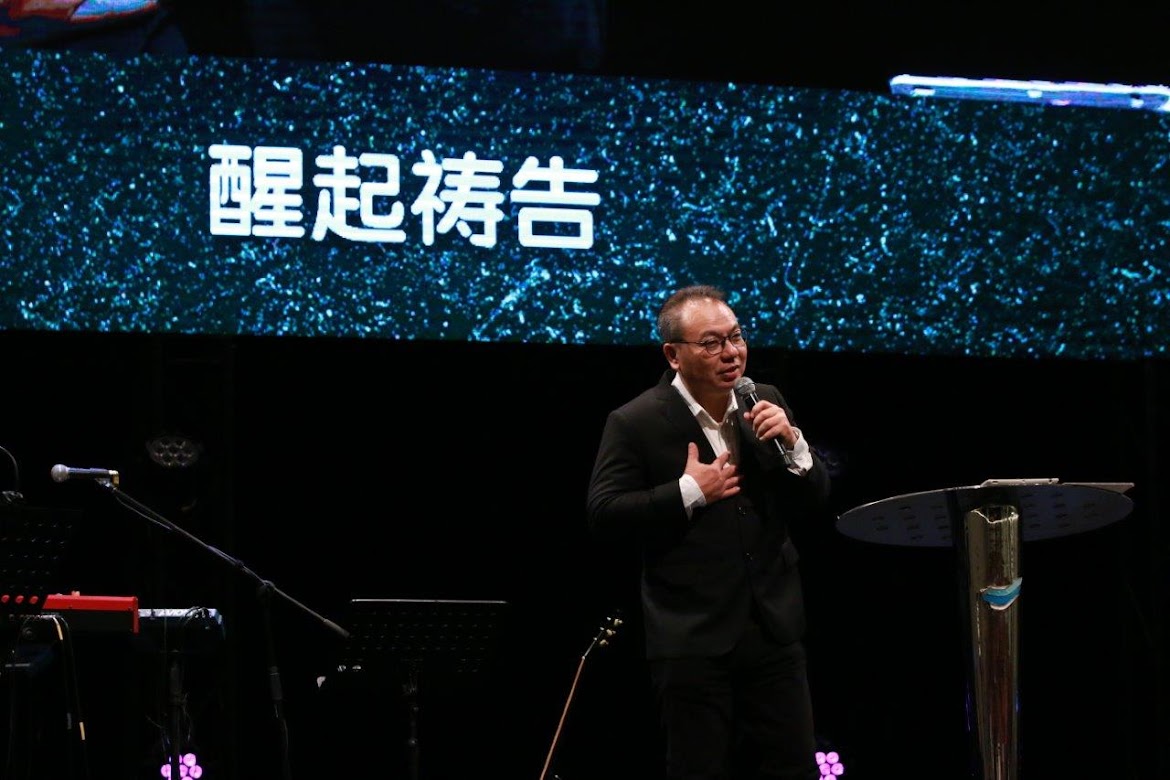 He opened with the reminder that when Jesus found His disciples sleeping in the garden of Gethsemane, he woke them up and told them to pray (Matt 26:41).

“The psalmist asked his heart, ‘Why are you so gloomy?’” said the pastor as he began his sermon. “Sometimes, we need to talk to our heart, but besides asking it why it is downcast, we also need to ask if it’s awake. It’s time to wake up, it’s time to spread the gospel and bring people into the house of God.”

In a world where technology seems to solve any problem, people may be tempted to think that there is no longer a need to pray. Do prayers really change things and improve lives?

“We need to know that prayer is the most basic entitlement we have as Christians,” Pastor George said. “When we ask of God, He will hear, and He will answer your prayers.”

John 16:24 reads, “Until now you have asked nothing in My name. Ask, and you will receive, that your joy may be full.” Sharing the story of George Müller, Pastor George illustrated the power of prayers.

Müller is an evangelist in the 1800s. He built five orphanages without campaigning for financial support or taking a loan. All he did was pray. Once, he sat all the children down at the breakfast table even though there was no food in the house. He told them to wait for God and He will provide. When they finished praying, a baker and a milkman knocked on the door with enough bread and milk to feed all the children.

Pastor George exhorted, “We need to have the right attitude when it comes to prayer. Sometimes, in the midst of our busy life, we forget to pray—we may even start to wonder if prayer really works. But I’m here to encourage you; wake up and pray!”

PERSIST IN HOPE
Luke 18:1-8 tells the familiar story of the persistent widow. In Biblical times, and even now, widows were the most vulnerable people in society—they had lost their source of protection and many were abandoned by society. The widow in this parable had lost everything, but she held on to her faith. Her persistence became her only hope.

Pastor George imagined the widow knocking on the judge’s door day and night; so much so that he cannot even sleep at night. In the end, he gave her justice not because he feared God or man, but because of her constant begging.

“Tell your heart not to be tired. Wake up and pray!” he said.

On May 14, the pilot on Sichuan Airlines Flight 8633 was forced to make an emergency landing at Chengdu Shuangliu International Airport after the cockpit windshield detached. Pastor George shared that 40 minutes into the flight, at the altitude of 30,000 feet, part of the windshield separated from the airplane and one of the co-pilots was blown out of the aircraft partially. The temperature in the cockpit dropped to minus 40 degrees Celsius.

But the captain, Liu Changjian, did not give up. In his interview, the pilot said that he could not give up because behind him were 119 passengers and nine aircrew members. He said that even if there was only a very small chance of success, he had to do his best to keep the aircraft in the air. After persisting for 20 over minutes, Captain Liu managed to make an emergency landing. The whole incident was made into a movie titled, The Captain.

“Persist, and there is hope,” the pastor said. “After watching the movie, I realized that all of us are like the captain of the plane. We may be the boss at work, or a parent at home—there are many people behind us, we cannot give up. When we persist, we bring them hope. Our lives can be a testimony to others.”

There is an elderly couple in Pastor George’s church: at the age of 92, husband and wife still attend every prayer meeting and weekend services without fail. They need to climb up three stories to reach the church but they persist even when they have to walk using a walking stick. “They may not be able to serve, but just by showing up in church, they encourage us to love God,” said Pastor George. “When you are persistent in your faith, you become the best testimony to others.” 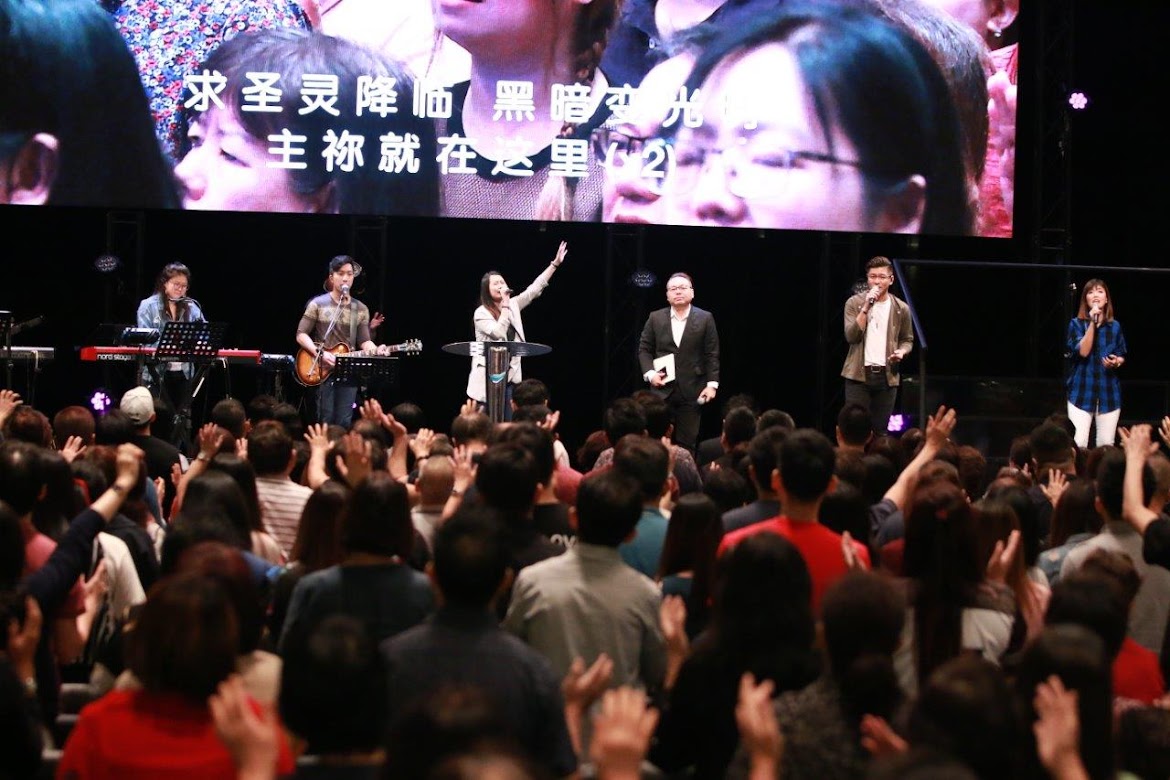 THE NEED TO CRY OUT TO GOD
Besides having the right attitude towards praying, Christians also need to learn the right way to pray. In Mark 10:46-52, blind Bartimaeus cried out to Jesus in a loud voice even when the people around told him to keep quiet.

“There is a time to pray in silence, but there is also a time to cry out to God aloud,” the pastor said.

In the Gospel of Luke, the word “cried out” refers to a loud cry from the depth of his heart. “It is a cry for help, like when someone is drowning and yelling to be rescued. Bartimaeus knew that Jesus was His last chance to change his life and he was crying out for help, ‘God save me!’”

Before he received Christ, Pastor George was a heavy smoker and drinker. Even after he received salvation, he found cigarettes and alcohol hard to let go of. He felt very guilty and would kneel down to repent before God every night. He was living in Singapore at that time and his hostel was near East Coast Park. Whenever he had the chance, he would go to the beach where the waves hit the rocks, to cry out to God. “Change me, change my life,” he would cry out.

One day, he bought a new pack of cigarettes and after taking one out, he heard a voice telling him to throw the whole pack away.

“I hadn’t had much experience with God then, so I asked the Voice, ‘can I finish this pack?’” the pastor said. The Voice insisted that he throw the whole pack away, so he obeyed. After throwing it away, he kneeled down to pray and the Holy Spirit filled him. From then on, he found that he couldn’t stand the smell of cigarettes or alcohol anymore.

He reiterated: “We need to fight for ourselves, we need to cry out to God and ask Him to change our lives.”

In closing, Pastor George went back to the story of Jesus praying in the garden of Gethsemane. He said that the garden was the most important battlefield. What took place there determined the fate of all mankind. Jesus knew what He had to go through on the way to the cross, and He chose to pray.

When He found His disciples sleeping, He asked them, “Why are you sleeping? Get up and pray, lest you fall into temptation.”

Pastor George told the church, “Even if you have prayed a lot, you must continue to pray. You must pray even more fervently. You need to cry out in a loud voice! Pray for your family’s salvation. Pray so that your joy may be full.”