The Power Of Praying In The Spirit: Choong Tsih-Ming

In this follow-up to his sermon on “The Ninth Hour”, Pastor Choon Tsih-Ming preaches on the practical power of praying in tongues. 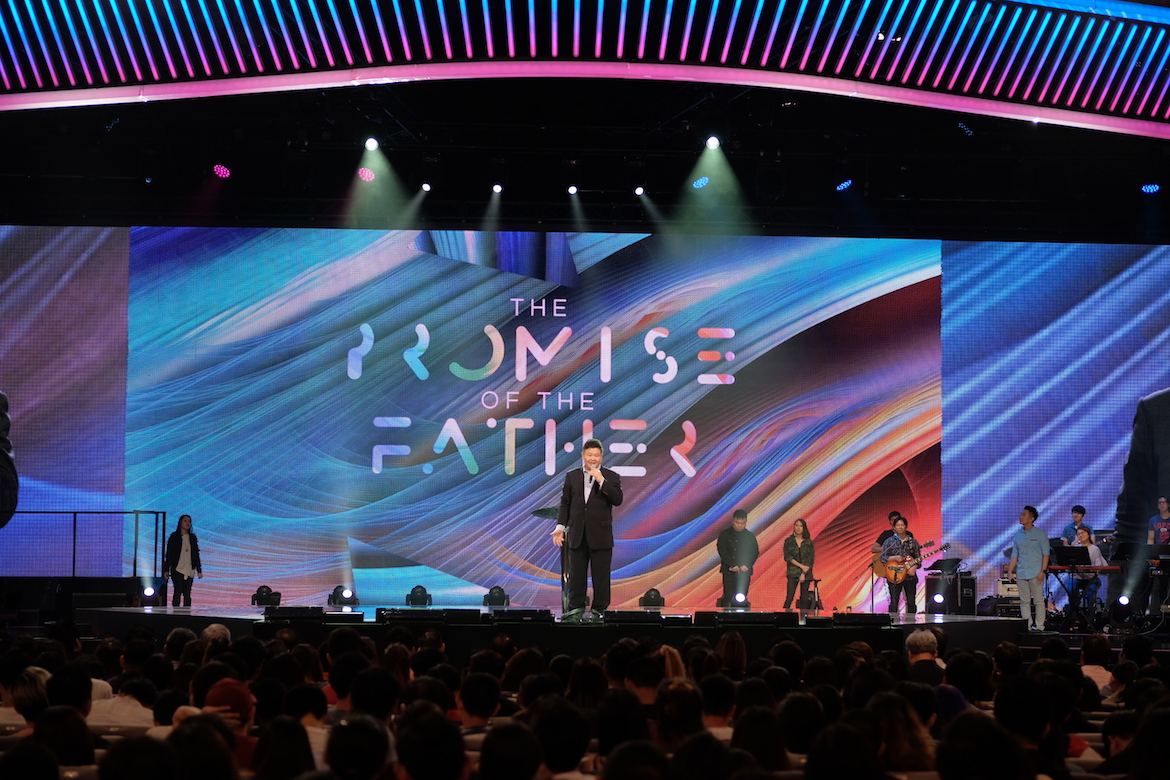 The Parable of the Sower in Matthew 13 describes four types of grounds that the Sower’s seeds fall onto. In the beginning of his sermon on the weekend of Sep 21 and 22, Pastor Choong Tsih-Ming explained that these four types of soil represent the four different conditions of the heart—each yields a different kind of response when a person receives the Word.

“In all four cases, the Word is heard, but it is the condition of the hearers that determines if there is a harvest of fruit,” the pastor explained.

When the Word that falls on “good rich soil”, the person who hears the Word fully embraces it, living to bear good fruits. Pastor Ming emphasized that Christians need to both understand and experience the Word of God through encountering and embracing the Holy Spirit.

He also explained that if a person does not understand the Word, or has shallow experiences in the spirit, the Word received does not bear as much fruit. Also, if the heart is distracted by the busyness of life and the pursuit of wealth, it also cannot bear fruits of the Holy Spirit.

Referring to Matthew 13:20-21 (TPT), Pastor Ming highlighted that experiencing God’s Word is directly proportional to the depth of which the truth of God’s Word sinks into a Christian’s hearts. “Our encounters with God need to be just as real and just as intense in order for the truth of the Word to sink into our hearts,” he explained.

Ephesians 5:15-19 ends with “singing the Psalms with praises and spontaneous songs given by the Spirit.” The pastor illustrated the verse with the example of a friend who always sings in tongues. When things do not go his way, instead of becoming angry, he sings in the Spirit and walks away. Pastor Ming explained that this was what it meant to be continually filled with the Holy Spirit, and to bear the fruit of the Spirit. 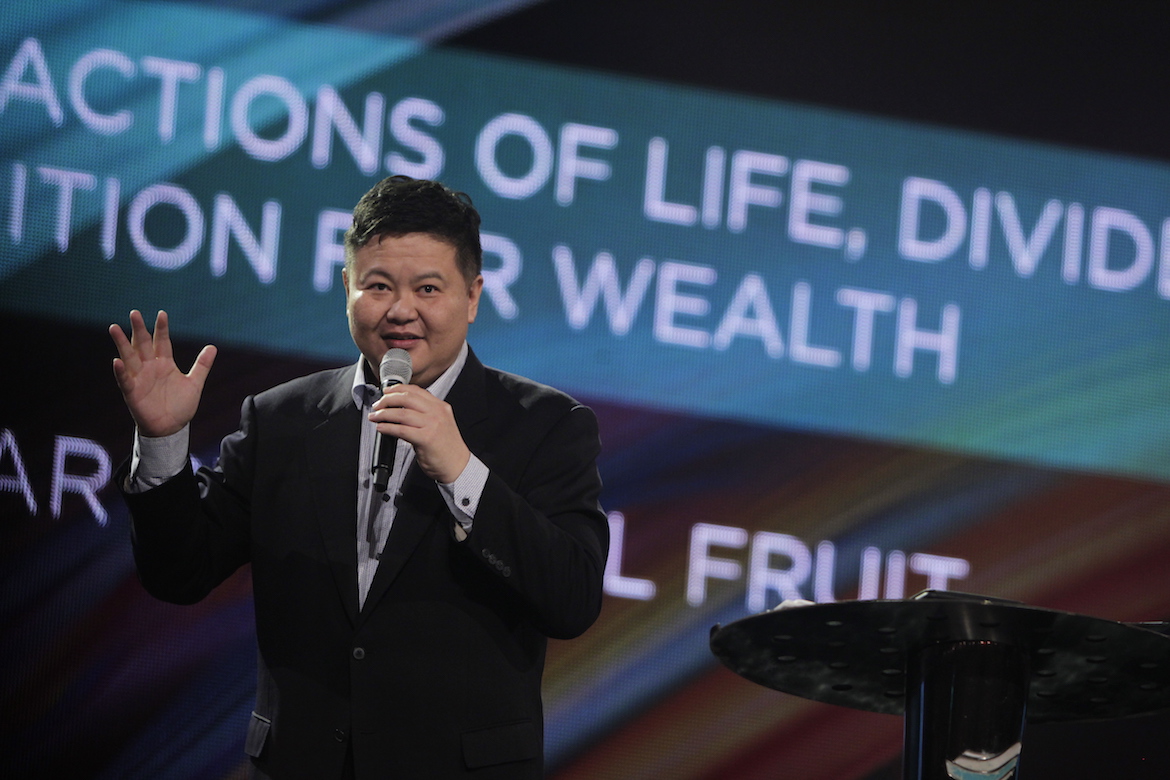 “Speaking in tongues is a supernatural experience that must be seen and heard,” Pastor Ming emphasized. Acts 2:4 (TPT) reads, “they were all filled and equipped with the Holy Spirit and were inspired to speak in tongues.” The disciples spoke in languages they had not learned, and they could be speaking in any of the 5000 known human languages of the world.

WHY DID GOD GIVE THE GIFT OF TONGUES?

“Language is used for creative purposes,” Pastor Ming pointed out. In John 6:63, Jesus said, “It is the Spirit who gives life; the flesh profits nothing. The words that I speak to you are spirit, and they are life.” Jesus was referring to His language as a creative tool. The pastor explained that in conjunction with Genesis 1:3, the verse demonstrates that God can create something out of nothing and He is not dependent on nature or its circumstances. With the same principle, the natural, which is the material, is then subordinate to the spiritual, which is immaterial. 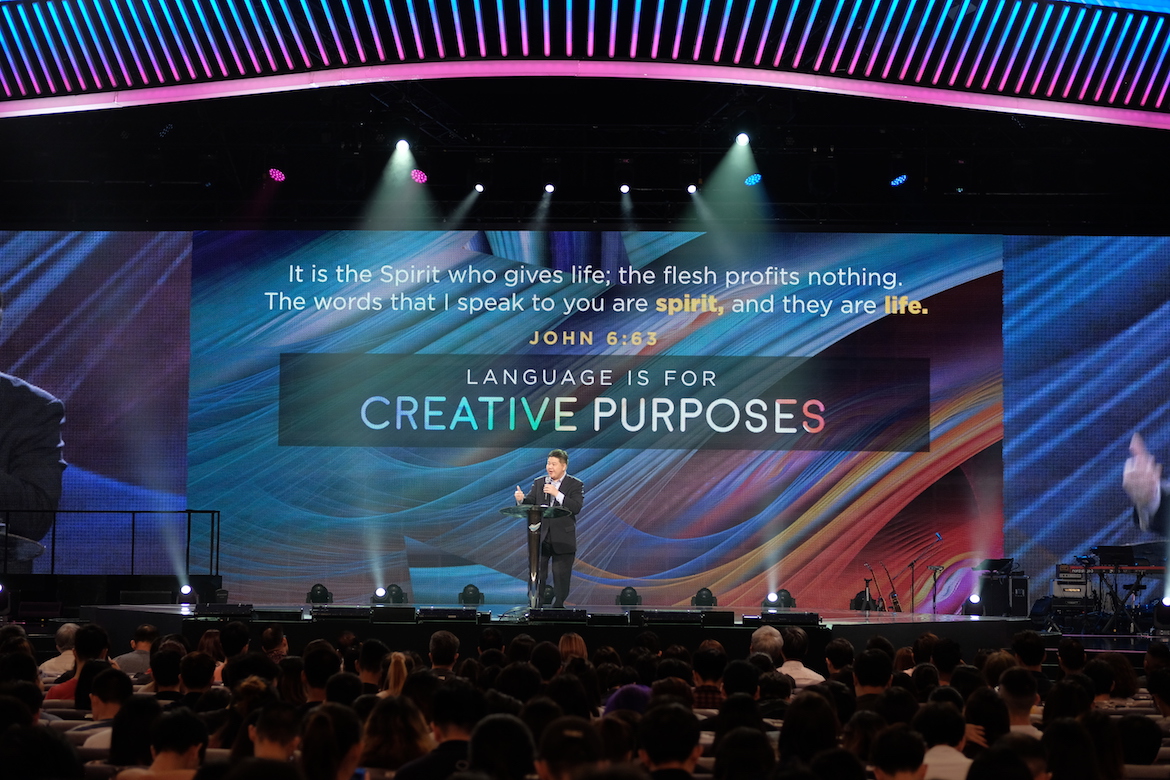 “Very often, we are trained to analyze the material, observe the natural and draw conclusions from what we see and hear. But we forget that beyond the natural world, there is the spiritual realm,” the pastor said. “The way to change our natural circumstances, is to speak from the natural realm into the spiritual realm. It is through words that we enter the realm of the spirit and change the atmosphere around us.”

Using the example of Winston Churchill, Pastor Ming described how the late British Prime Minister weaponized his words against the impending rise of the Nazis. If Winston Churchill’s words could save a nation, he pointed out, the words of the Church will not only save a nation but also the world. If words can be so powerful in the natural realm, how much more power can they have when the Holy Spirit carries them into the spiritual realm?

“That is why we must pray in tongues,” exhorted Pastor Ming. “Change does not happen in the natural realm until something first happens in the spiritual realm. When we pray in tongues, we get access into the realm of the spirit.”

In Genesis 11:4-8, God confused the languages of the people when they built the tower of Babel. He scattered them abroad to stop them from building in rebellion against Him. But in Acts 2:1-4, God gathered His children again, gifting them a supernatural language and manifesting a supernatural dimension of His power.

“From this place of prayer, there will come an amazing, powerful unity that God will bring forth in our church,” he declared.

Firstly, it edifies the spirit man and recalibrates a person’s mind to its original purpose. The Greek word oikodomeo in 1 Corinthians 14:4, means to build up from foundation, to restore and to repair, to increase capacity and to recalibrate the minds to its original purpose. That is what speaking in tongues does. Roping two volunteers from the Drama Ministry, Pastor Ming illustrated his point by showing how the Holy Spirit strengthens and brings assurance to a believer. 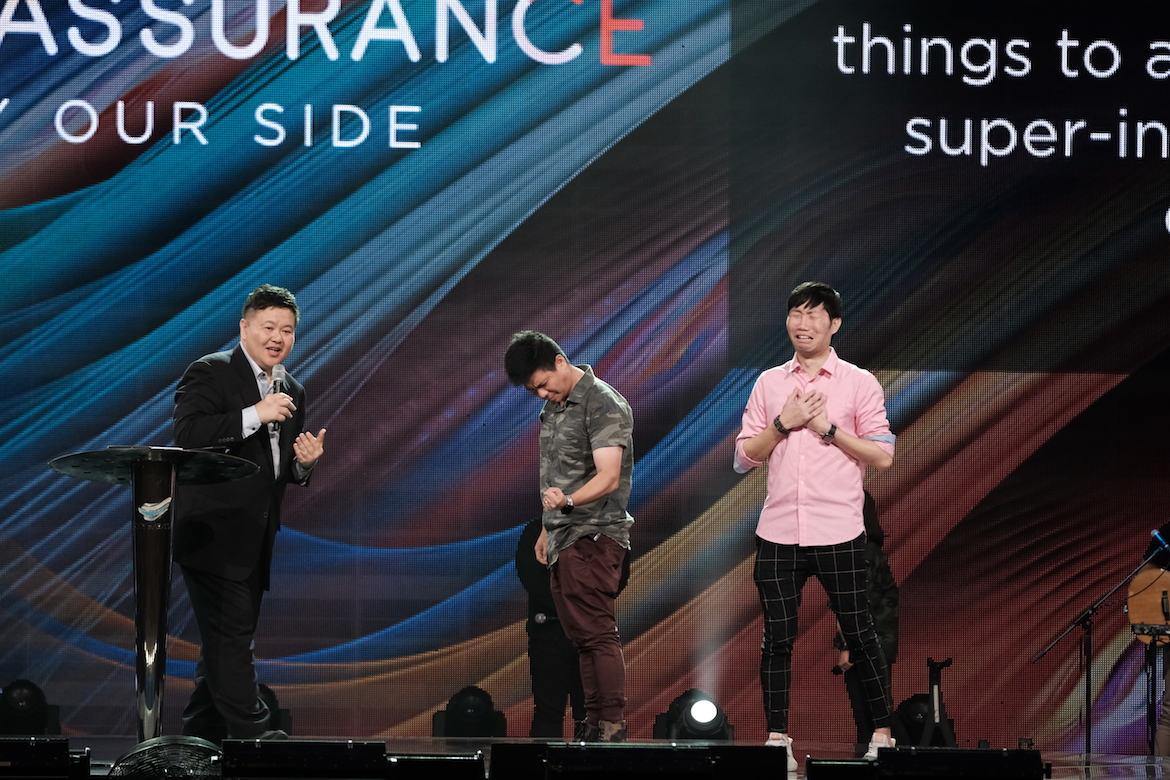 Secondly, praying in tongues is speaking directly to God in mysteries. Revelation 8:3-4 talks about how angels are activated to move on a person’s behalf when they pray. Pastor Ming encouraged the congregation to pray unceasingly, allowing the angels of God to move on their behalf.

Lastly, praying in tongues aids effective spiritual warfare. He quoted Romans 8:26 (TPT) which talks about the Holy Spirit who “rises up within us to super-intercede on our behalf, pleading to God with emotional sighs too deep for words”. He closed his message with an altar call for those who are in need of supernatural intervention.

Cherie Anne Lian is a pursuer of the presence of God and enjoys soaking in His love & presence. She treasures hearing the voice of God at every opportunity and endeavours to stay close to the Holy Spirit whether be it in the boardroom or at home. On a normal day, you can find her reading a book or journaling. As an individual, she is a Daughter, Sister, Friend and a banking professional.