Easter 2019: Jesus Specializes In The Impossible

Once upon a time in Jerusalem, there lived a widow, Abigail, who ran her late husband’s production studio Petra Production. She found it hard to keep the business afloat by herself, always challenged to find exciting content for the channel. One day, she heard about Jesus, a miracle worker. Thoroughly skeptical, Abigail decided to set her team to secretly film a weekly expose on Jesus. The reality show was bound to draw a great audience. 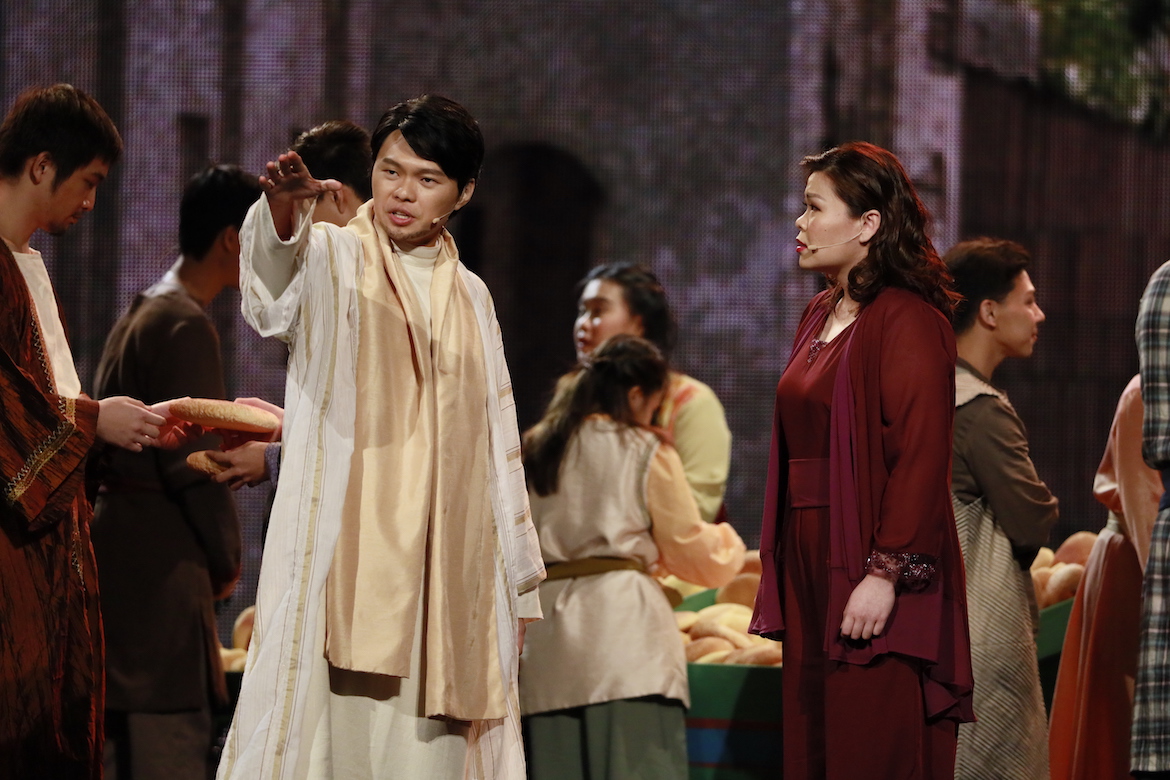 Playing to packed halls over the weekend of April 19 to 21, the Easter drama by City Harvest Church dangled a scintillating premise that drew both members and their friends into a fictional retelling of ministry, crucifixion and  resurrection of Jesus Christ.

Although she had set out prove Jesus was a fraud, Abigail witnessed with her own eyes the resurrection of the daughter of her employee, Lydia. The revelation that Jesus was the real deal caused Abigail to turn her show into one that chronicled His wondrous deeds, titled The J Factor.

However, not everyone was a fan of Jesus. The Chief Pharisee blackmailed Abigail into starting a smear campaign against Jesus and to stand before Pilate and falsely accuse Jesus of being a fraudster. Jesus was whipped and forced to carry His cross to Calvary. At the foot of the Cross where Jesus hung, Abigail witnessed the innocent man who was sinless, paying for her lies. 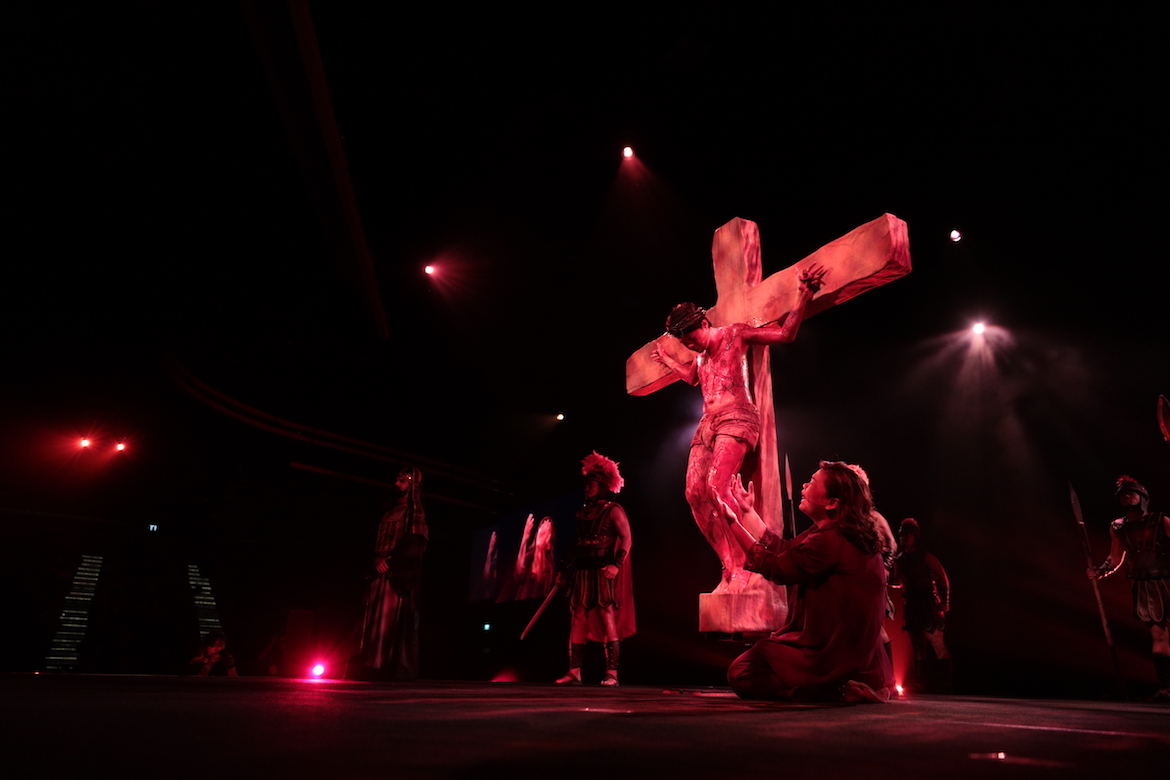 In the midst of the turmoil, Abigail discovered that Josiah, the Pharisees’ apprentice, was, in fact, her long lost son. Shocked and distraught that his life as a Pharisee would never come to pass, Josiah rejected his birth mother and stormed off. On his way, he encountered the resurrected Jesus and realizes with deep shock that He is the Messiah prophesied by Isaiah 53:7, “He was oppressed and He was afflicted, Yet He opened not His mouth; He was led as a lamb to the slaughter,… He was wounded for our transgressions, He was bruised for our iniquities; The chastisement for our peace was upon Him, And by His stripes, we are healed.”

Having received forgiveness from Jesus for his role in sending the Messiah to the Cross, Josiah found the strength to forgive his mother and they were reconciled. The J Factor powerfully captured the love of God and the message that it is never too late for Jesus to save and restore. 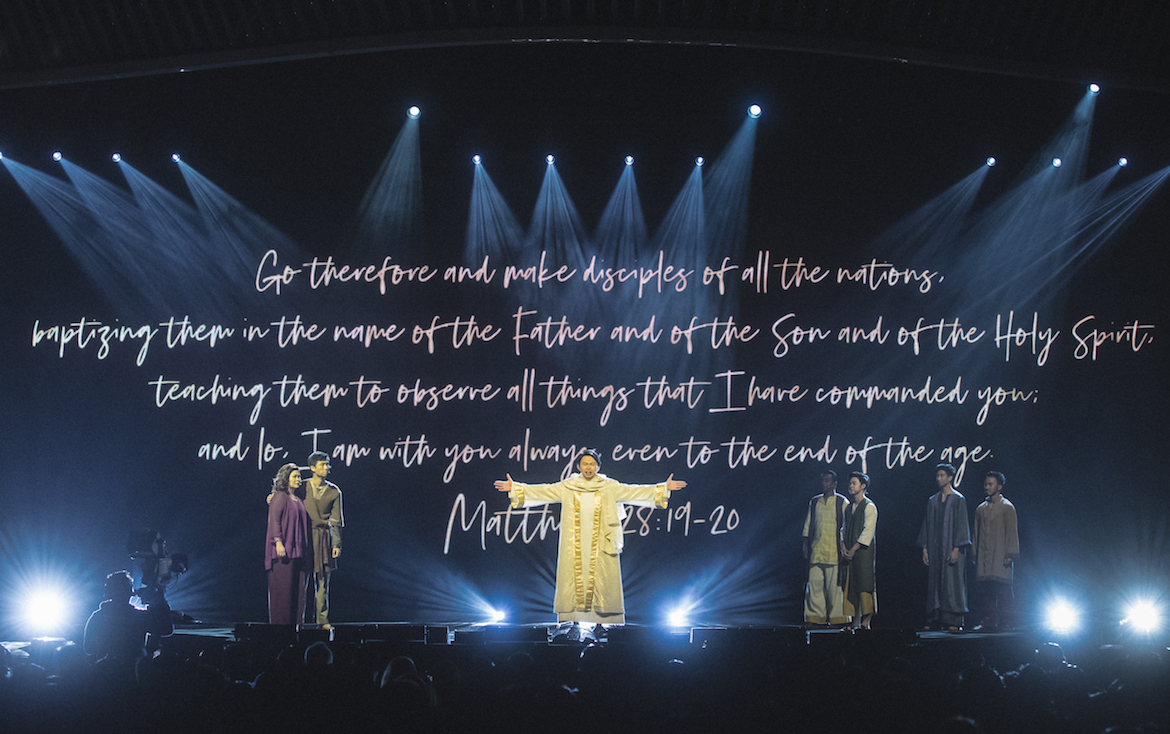 JESUS, THE RESURRECTION AND LIFE
Executive pastor of CHC, Bobby Chaw started his Easter message with John 11—the resurrection of Lazarus.

When Jesus arrived at Lazarus’ tomb, his sisters, Mary and Martha were crying and Martha told Jesus that He was too late—if He had arrived a few days earlier, He would have been able to save Lazarus. But the truth was, Jesus was not “too late” at all. He called out to Lazarus, who came back to life and promptly walked out of the tomb.

Pastor Bobby explained that in Biblical times, the people would mourn and grieve around the grave. Similarly in life, when there is failure in a situation, one would grieve over how they could have done better, things would have turned out better.

According to Rabbinical traditions, the spirit of the dead was believed to wander about the tomb the first three days, seeking the opportunity to return to the body. But as the body decays on the fourth day, the spirit hovers no more and departs. 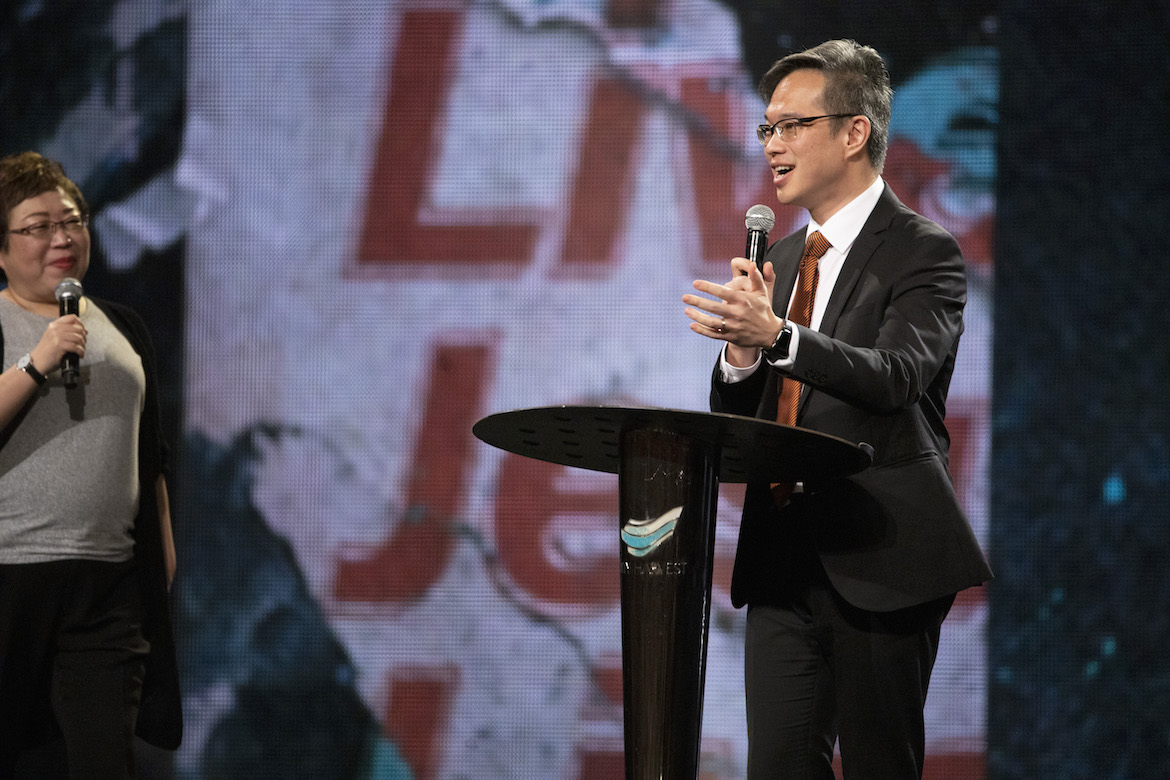 Significantly, the fourth day that Jesus showed up, when there seemed to be no hope that Lazarus could come back to life.

“God is not early but He is never late,” declared Pastor Bobby. In fact, he said, Jesus specializes in the fourth-day miracle, just when things seem impossible and too late for any change.

With that, Pastor Bobby shared that Jesus could bring mankind out of three kinds of tombs.

1. THE TOMB OF SIN AND SORROW
The Bible says that all man are trapped in their sinful nature. Even Apostle Paul lamented over his inability to stop practicing evil (Rom 7:19, 24-25).

Pastor Bobby shared a story of Mu Jia Yin, a member from a Taiwanese church affiliated to CHC. Jia Yin came from a dysfunctional family. When she was a month old, Jia Ying‘s mother took her and eloped with a lover. At 5, her biological father wanted to bring her home, but Jia Yin’s mother became hysterical and threatened them with knives. Jia Yin became fearful, feeling unsafe and unwanted. She hated her family. When she was in Secondary 2, she decided to run away from home.

Jia Yin soon got into bad company and was hooked on drugs, drinking and partying. She would work as a hostess to get money to feed her drug addiction. She lost all her friends and all her money to drugs. At age 24, Jia Yin was so depressed that she decided to end her own life. As she climbed to a rooftop, she suddenly heard a voice speaking into her heart, “My child, I understand. You still have me.”

She encountered Jesus right at the edge of her life and found a new strength. She quit drugs and other vices. She went to church one day with her friends, weeping as she gave Jesus all the bitterness over the long years of her life. Mu Jia Yin (front row, seated with blue cap) and the beneficiaries from her organization Jesus Cares For Taiwan

The pastor that day shared a message that everyone can be a blessing to others and that it’s never too late to change. Jia Yin was inspired by the word, and decided to work hard from that moment on. She went back to school and got a diploma in social work. Today, she is one of the founders of Jesus Cares for Taiwan (社團法人高雄市飛揚福利服務協會), an organization that plants churches in Taiwan and provides care for the disadvantaged.

“You may be giving up hope on yourself, thinking that it’s impossible and too late for a change,” said Pastor Bobby. “But this Easter I’m here to tell you that Jesus is alive. Jesus has overcome the tomb of sin and sorrow.”

2. THE TOMB OF SICKNESS AND PAIN
Pastor Bobby next shared the miraculous story of Kelly and her son, Sean. Kelly is a member of CHC’s Chinese service. When her son Sean was in Primary 1, she discovered that he had a lower IQ, speech impairment and urinary incontinence. He could not control his bladder and often wet his pants. As a result, he was often mocked at and bullied by his classmates.

When Sean was in Primary 4, Kelly started attending CHC and brought Sean to the children’s church, Harvest Kidz. Now with Jesus in her heart, she began to believe and pray for Sean healing.

Six months later, Sean began smiling and started expressing himself better. He started playing with and befriending other kids. Within a year, his incontinence was healed without any medical treatment.

But tragedy struck when Sean was 16. He was going home from church one day when he had a seizure and collapsed. He was brought to the hospital where he was found to be was suffering from cerebral hemorrhage. He needed emergency surgery and the doctors told Kelly to prepare for the worst. Sean in a coma after a seizure at age 16

All her church friends started praying together with her. As Kelly prayed, she heard Jesus say to her, “Do not be afraid. I heard your prayer and I will give you a brand new son. This is only a process that he has to go through.” True enough, the surgery was a success and Sean was discharged within 17 days. Though Sean had to have a part of his brain removed, he was none the worse for it. In fact, in the coming months, he was completely healed by the power of the Holy Spirit and went on to achieve good awards in his school. Recently, Sean even went on a mission trip to Taiwan and shared his testimony of this miracle. 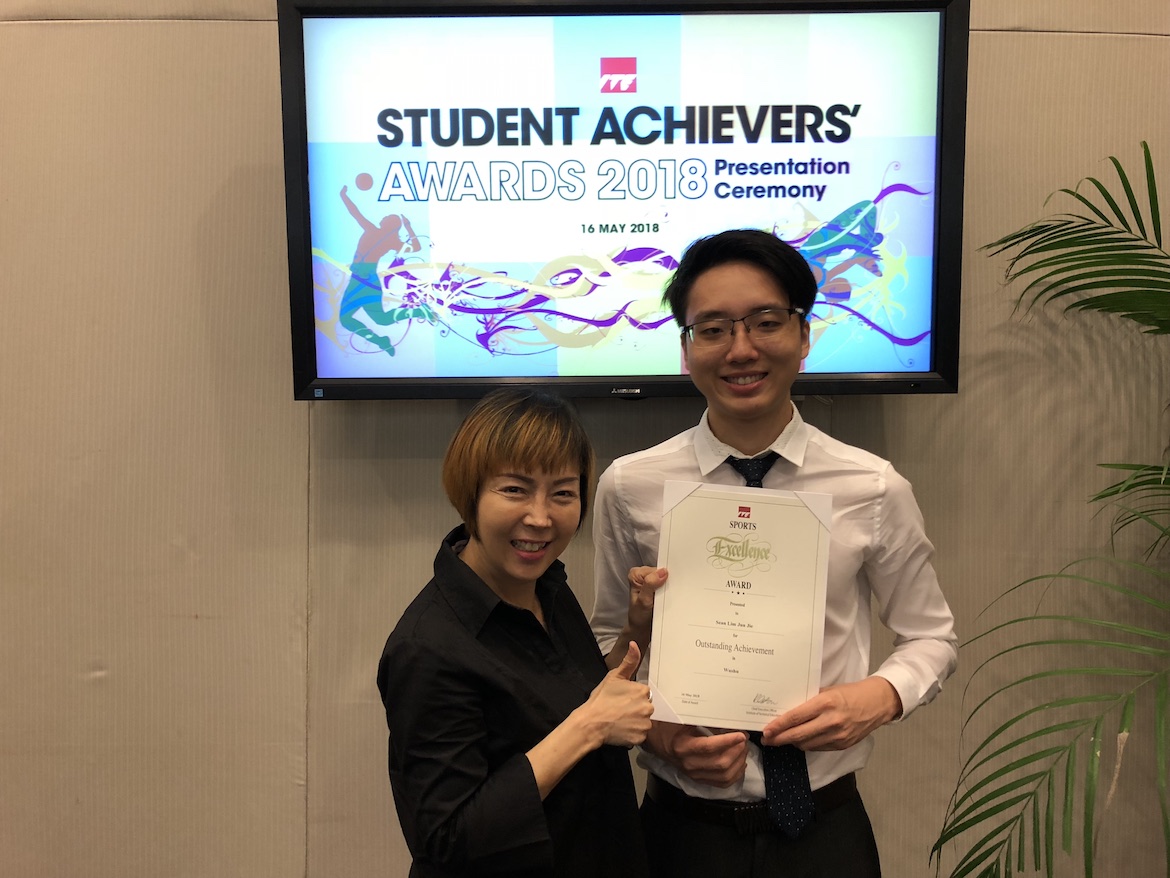 “The same Jesus who is the same yesterday, today and forever,” declared Pastor Bobby. “He’s here in this place, He’s here to heal us and to deliver us.”

3. THE TOMB OF DEBT AND FAILURE
Qiu Lian He grew up in Malaysia. At age 13, he was introduced to soccer gambling and for the next 18 years, Lian He became addicted to gambling.

At one point, he became a bookie who organized illegal gambling and was almost arrested. He borrowed money from everyone around him, even from loansharks. His friends started to distance themselves and his family was forced to shoulder his debts that amounted to hundreds of thousands of dollars. Lian He felt like a failure and wanted to end his life many times.

In 2006, Lian He came to Singapore to escape his debtors, but he did not change his habits. Two years later, someone invited him to City Harvest Church and he came out of curiosity–his life was not changed. Even as the pastors were preaching in church, he would sit there and surf to online gambling sites.

In 2010, Lian He came to the end of himself. He cried out to God, “Jesus if you are real, please help me clear all these debts. I’m tired of this kind of life. And for the rest of my life, I will follow you and I will testify of your goodness.” 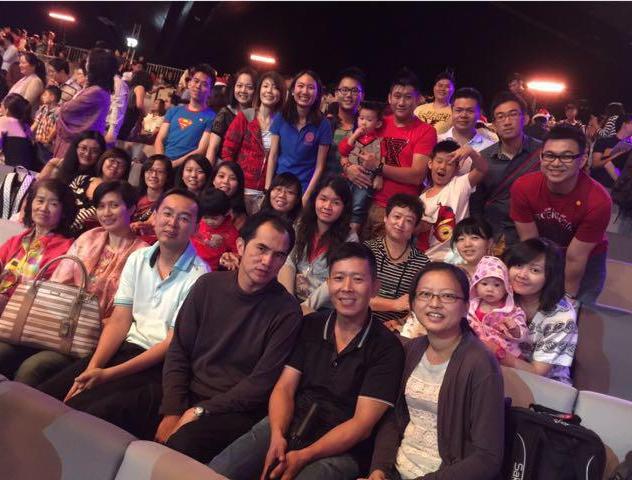 Lian He (front row, third from right) with friends he invited to CHC

Lian He miraculously found himself with the strength to quit gambling. With spiritual discipline and Godly advice, he managed to clear all his debts in a short span of two years. God provided him with a good job and he was even able to afford to buy a private house back in Malaysia in four years. Today, Lian He is totally debt free and no longer in hiding; his family relationships have been restored.

On the first Easter 2000 years ago, even though Jesus was rich, but for the sake of all, he became poor. Lian He did not forget His promise to God. In the past several years, Lian He has testified and brought over 60 friends to Jesus Christ. Lian He was present at Friday’s service along with 17 of his friends.

Pastor Bobby preached that this Easter, just as Jesus called out to Lazarus to walk out of his grave, He is calling out those who in tombs of sin and sorrow, sickness and pain, debt and failure. 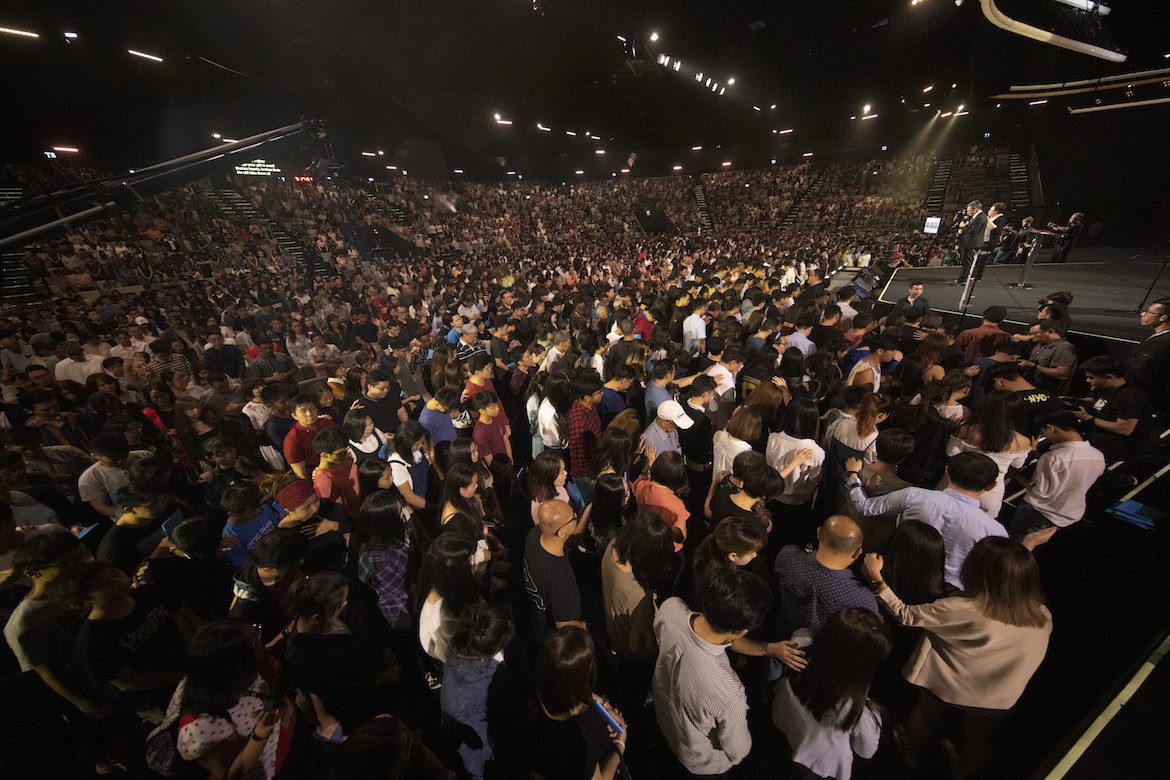 Easter is indeed a time of salvation and miracles. 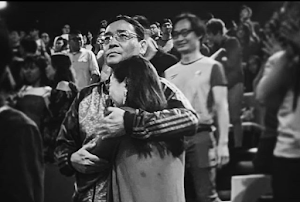 Rhoda Siu, a youth cell group leader in City Harvest Church took a step of faith to invite her father to service this Easter. They had been estranged from each other for many years, but she picked up all her courage to invite him to church and initiated a reconciliation with him. She says, “He was touched by the drama and the word … He kept tearing. I then told him I forgave him and gave him a hug.” They both went down to the altar call hand in hand to rededicate his life to God.