Christmas is a time of miracles—Jesus’ birth was the greatest miracle of all. City News celebrates the season with this wonderful testimony of salvation. All his life, this 75-year-old had despised Christians, until he experienced the reality of Jesus for himself. 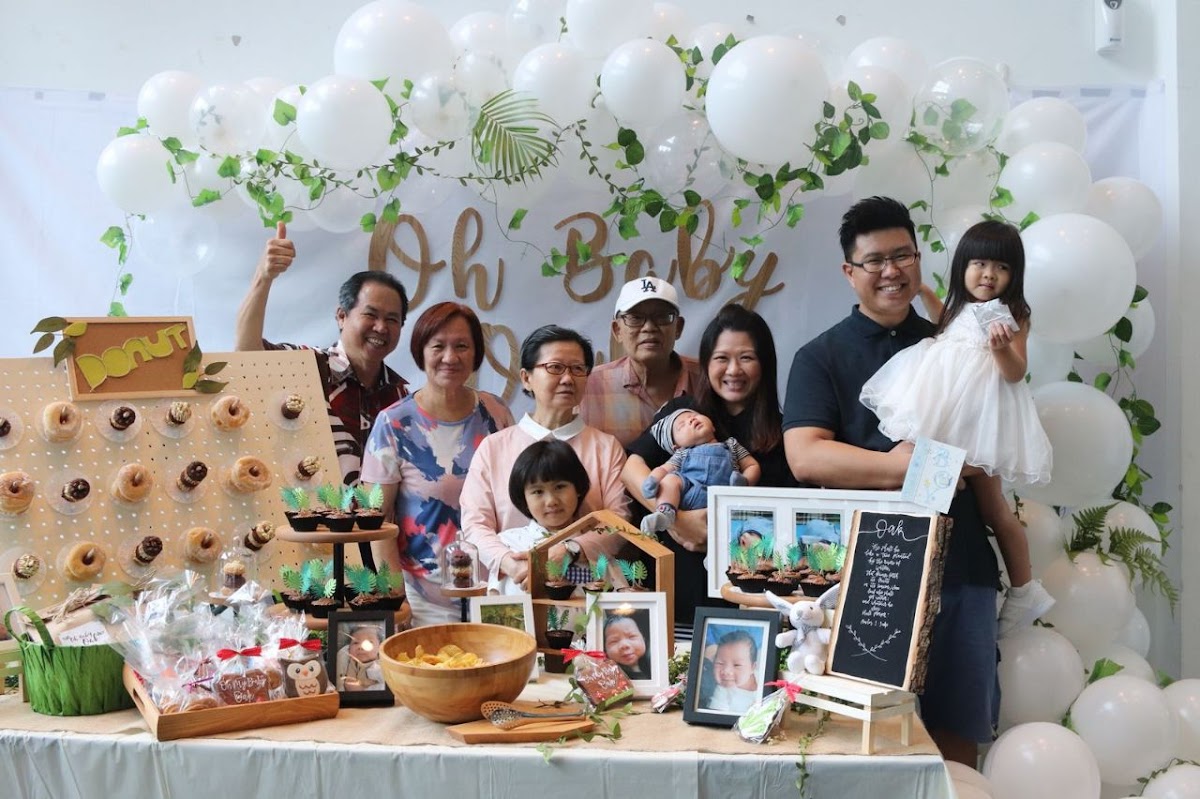 Catherine and Adam with all their parents and children

Because of a misconception, Lee Choi Tong, 75, nurtured a lifelong dislike for Christians. Mr Lee is the father of Catherine Lee, a pastoral supervisor at City Harvest Church. Understandably, this clash caused tension between father and daughter for many years.

“Once, he spoke to some pastors, they told him they earned money from collecting tithes and offerings from their congregation,” Catherine recalls. “They also started criticizing other religions, saying they are all fake and wrong, that they’re only about worshipping wooden idols.”

Mr Lee took offence to that and felt that Christians were arrogant. It didn’t help that one Christian in the family was a poor ambassador of Christ. “I had an aunt, a Christian, who brought my grandmother, who had dementia, to the bank and withdrew all her savings,” adds Catherine. “So, my dad’s impression of Christians is that they are very proud, selfish and greedy.”

When Catherine decided to receive Christ at the age of 15, her father was strongly against the idea. “He even told me that if I didn’t go to church he would give me anything I wanted,” laughs Catherine. “Yes, he tried to bribe me.”

Being 15, Catherine thought her father was offering her a great deal. But as she continued praying and reading the Bible, she encountered Jesus. Finally, she told her dad honestly that she had made up her mind to follow Jesus.  From that point, her dad stopped talking to her. It was the start of a long cold war.

“Each time I went to church or cell group, the doors would be locked when I came home,” she says. “My dad didn’t pay for my school fees when I was in polytechnic and he didn’t gave me an allowance.”

Because this conflict between her husband and her child, Catherine’s mother fell into depression. When Catherine got married, her parents did not attend her wedding.

A LIFETIME OF PRAYERS BRINGS BREAKTHROUGH

Catherine became a pastoral supervisor in City Harvest Church. After she got married, she would visit her parents with her husband Adam Tay. Adam would always greet his father-in-law and try to strike up a conversation, but never get a response. Still, the couple pressed on in prayer for the salvation of Catherine’s parents.

“It wasn’t until a year ago that my father finally responded to Adam’s attempts at conversation with a nod,” says Catherine. It had been around six years since they got married. This was the start of a series of small breakthroughs with her father.

“Then my dad wanted Adam to fix something at home,” she continues. “Adam was very enthusiastic about helping my dad, and I think for the first time my dad felt someone was so willing to help him.”

God was moving. When Maria Tok, the pastor of CHC’s Dialect Service visited Catherine’s mother at home, “my dad was sitting in the living room when Pastor Maria prayed for my mom,” says Catherine. “We were very shocked that he was okay with that! He usually shouts at any Christian and sometimes, he even chases them out of the house. But he didn’t this time—he even witnessed my mother crying, weeping, receiving Christ.”

At the start of this year, Mr Lee had to be hospitalized. When the Tays visited him, Adam would try to make conversation with him.

“My husband is the awesome one,” beams Catherine. “He actually managed to talk to my dad and, somehow, there was such a connection that my dad started talking to him. So there was Adam, in his ‘broken’ Chinese, talking to my Chinese-speaking father.”

In their early conversations, Adam would share about his upbringing, how he was brought up to know and love God. After seeing that Mr Lee did not object to Pastor Maria praying for his wife, Adam became bolder about telling him who Jesus is.

“From then on, we started visiting more often,” says Catherine. “There were a few occasions when my sister wasn’t able to bring my dad for follow-ups at the hospital, so Adam and I went. I believe my dad felt very loved because there was a lot of support.”

Mr Lee was scheduled to go through heart surgery in May. “We managed to pray for him just before he went into the operating theater; tears came to his eyes when I prayed.” Catherine remembers. “When he was recovering in ICU, I would feed him when I visited and before I left, I would pray for him. He was okay with that.”

Catherine also had faithful church members in her zone who would visit Mr Lee, even when she was not there, to pray for him. She smiles, “My parents felt very supported and loved.” 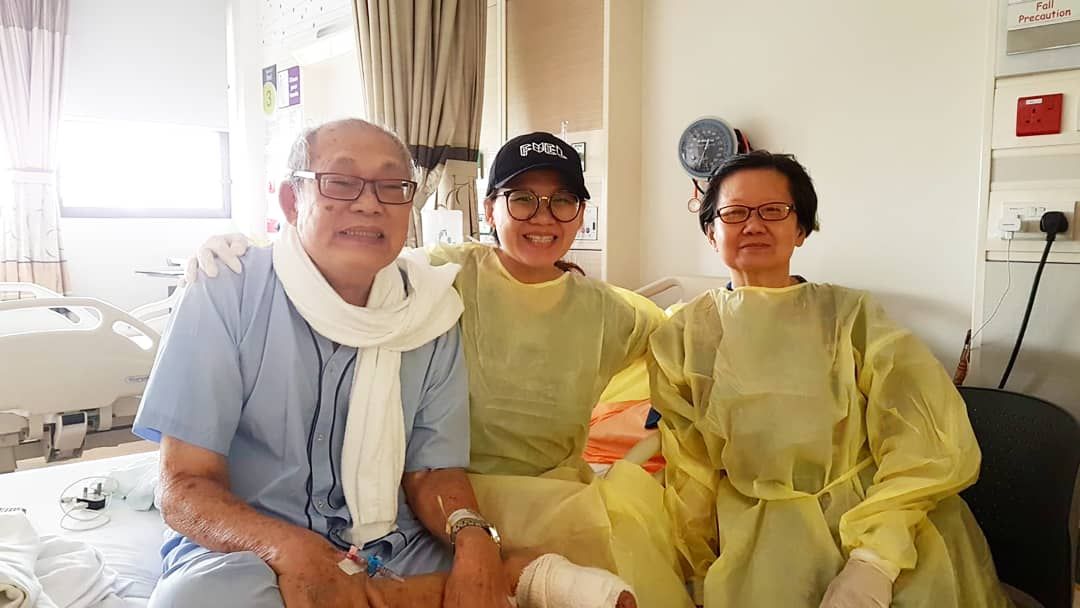 The Lees thought that the worst was over after the heart surgery, but while in hospital Mr Lee started having an infection—the doctors then discovered his blood vessels were clogged. He had to go through two amputations to remove his toes.

Catherine had planned to bring him for an outreach organised by CHC’s Dialect Service on his birthday in October but because of the amputation, they missed the event.

“I messaged Pastor Maria to tell her my dad couldn’t go for the outreach and she immediately made an appointment to visit him,” she says.

Pastor Maria brought along a Dialect Service leader who is also a nurse. Catherine says, “He was very open to them because he thought it was just a nurse coming to visit. After the nurse changed him dressing and gave him some advice, Pastor Maria took over.

“God must have given her a word of knowledge,” adds Catherine. “The moment she moved to sit next to my dad, the presence of God came. Pastor put her hands on my dad’s back, and said, ‘I understand it can be very frightening to see the things happening to you and to be so helpless.’ At that point, my dad started tearing uncontrollably. Pastor Maria then said, ”Uncle, what man cannot do, and what medical help cannot provide, Jesus can do, He can heal you. Jesus can preserve your health, your feet, and Jesus wants to save your soul.

“‘Do you want to receive Jesus into your life?’”

The moment Catherine had been praying for for decades happened: her father Lee nodded yes.

“That was the miracle,” she says. “I thought he didn’t understand. But when Pastor said to pray with her, he repeated every single word in the prayer. He was tearing—he understood.” 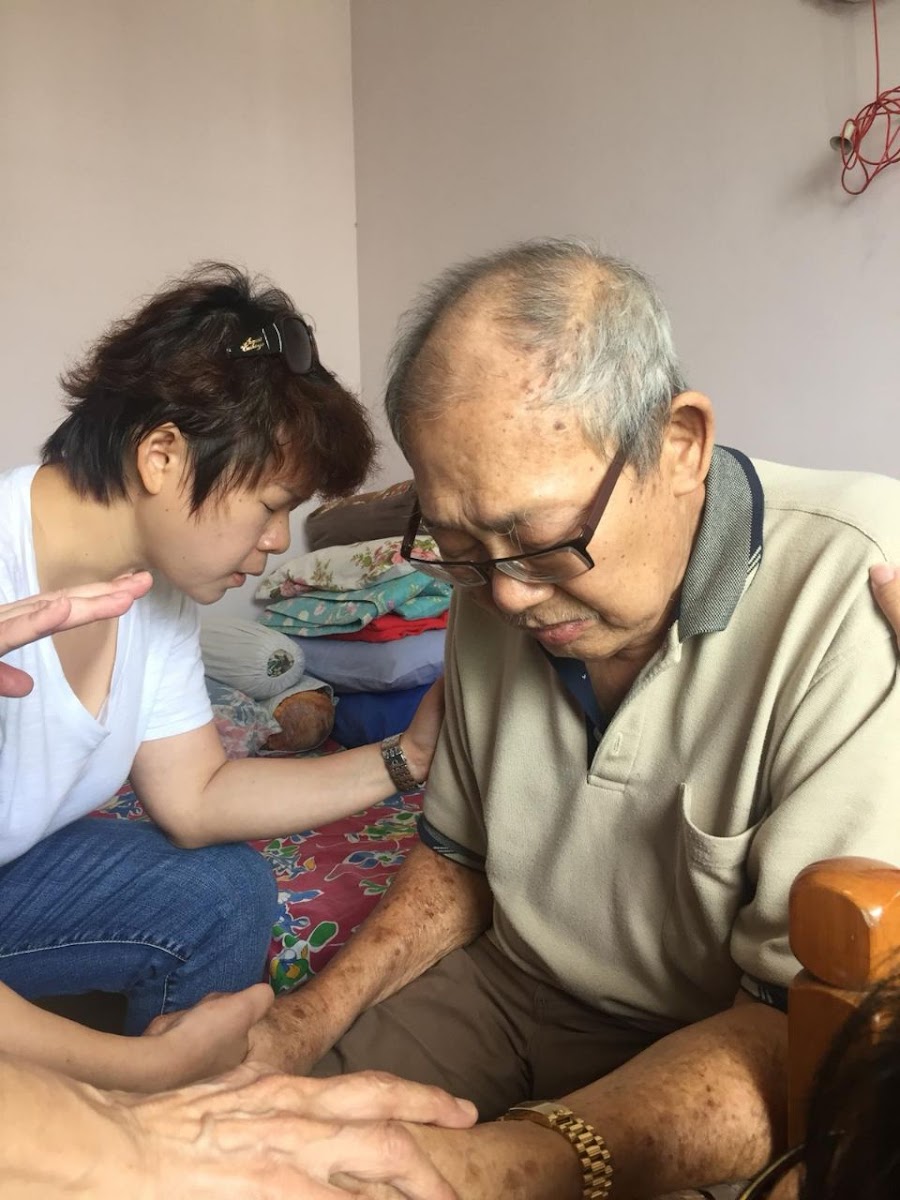 Catherine knows this to be a work of God. “It was really not by the persuasive words of man, because Pastor Maria didn’t try to persuade my dad or over-talk, she went straight to introduce Jesus.”

After saying the sinner’s prayer with Mr Lee, Pastor Maria presented him with a card containing worship songs and Bible verses, and told him to listen to it every day.

Catherine was stunned by the whole thing. “I was very shocked,” she admits. “I sat there tearing up the whole time.”

After Pastor Maria left, her mother said to her father cheekily, “I’ve never seen you cry but you cried just now.”

“Adam and I started laughing and told her not to make fun of him,” says Catherine. “Then my mom said, ‘I’m not making fun of him, but I want him to know that when he was crying, I was crying with him. Because I know he doesn’t cry easily.'”

Later, Catherine’s mother revealed to her that her father admitted he wept during the sinner’s prayer because he had felt Jesus for the first time in his life.

Shortly after receiving Christ, Mr Lee had to undergo another amputation.

“Pastor Audrey (Ng) and Pastor (Wu Yu) Zhuang visited him one day when I was not there,” recalls Catherine. “My dad told Pastor Audrey that he had had an encounter with God. For someone so against God, to say that he has prayed and he felt the presence of Jesus, it was really something.

“In the past, when my members prayed for him, he would tell them he didn’t believe in Jesus. But when he felt Jesus for himself, he finally understood that God is real. He said that he has surrendered his whole life to God, even his leg. And now, his leg is healing very well, there are no other signs of infection. We’re praying for total healing.”

For almost 20 years, Mr Lee had not spoken a word to his daughter. But now, he would call her out of the blue just to chat. “He would ask me to send videos of my kids to him,” smiles Catherine. “He learned how to video call recently and would call to see the kids. He loves my children a lot.”

When Catherine had her third child in July, her father even gave Baby Oak an angpow. God has granted Catherine not only the desire of her heart that her father would be saved, but He has brought reconciliation to her family.

Mr Lee had not been able to attend church services because of the amputation, he finally made it to church and attended the Candlelight Service with his daughter and wife.

Indeed when one is saved, the whole household shall be saved.