On September 29, a 7.5 magnitude earthquake struck the Indonesian island of Sulawesi on Sep 29 and a tsunami with waves up to 6m high followed. The death toll in the village of Palu reached over 800. Jolyn Tan was on the first disaster relief trip City Harvest Church sent out to Palu. She tells City News her story.

I was on my way to church when I heard the news of the disaster that happened in Palu, Indonesia. I contacted Pastor Kenneth Sim (who oversees disaster relief missions at CHC), and told him that I was interested to go on the second or third disaster relief trip.

He asked me if I could fly out the very same night, and I said okay, even though my heart was filled with uncertainty. 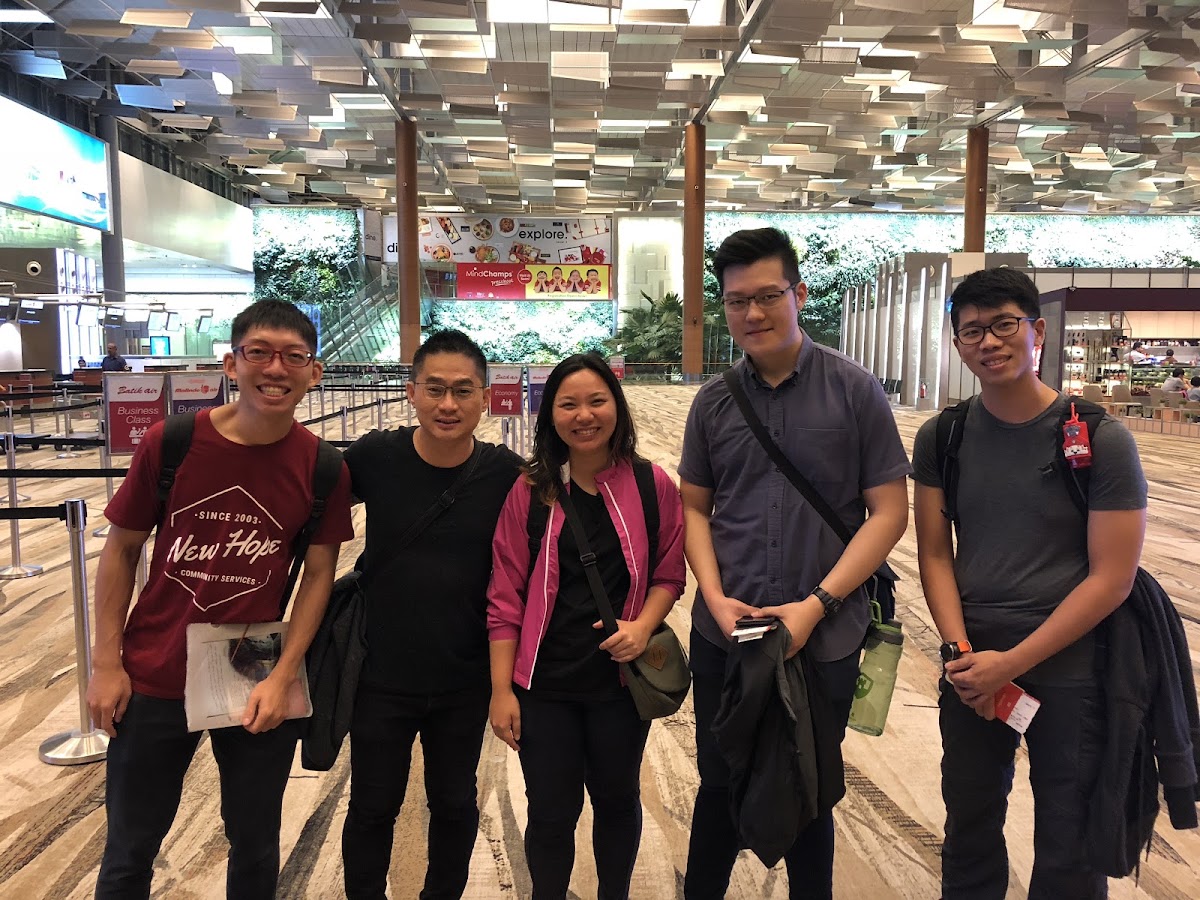 That night at 8.30pm, the team gathered at the airport. To my surprise, I was the only girl in the team of five. We boarded the plane at 10.20pm and arrived at Jalaluddin Airport at 5am the next day.

That was the beginning of the longest car ride I had ever taken: it took us 18 hours to reach Palu. I remember falling asleep and every time I woke up, the guys on the team would tell me that we needed another three hours to reach the destination. 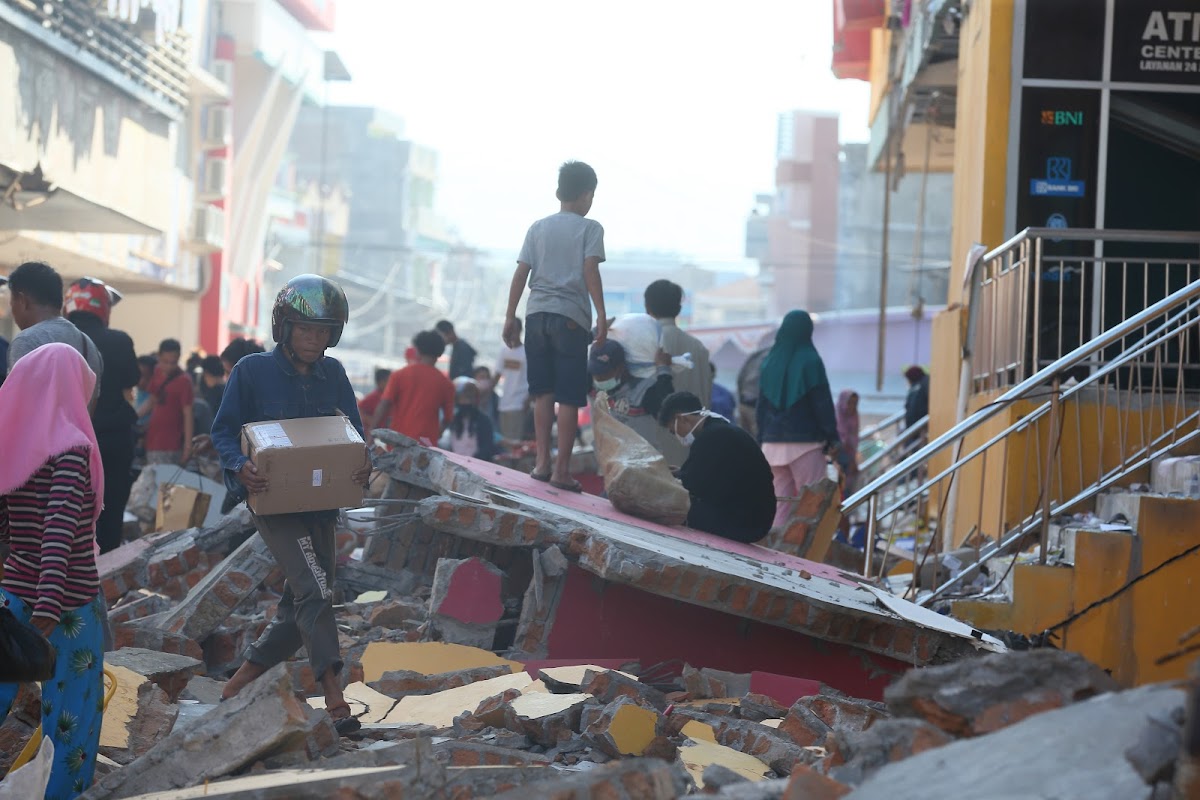 Before we turned into the city of Palu, we took a break to gas up. The traffic ahead would cost us another seven hours of driving, plus we wanted to play safe, having heard stories of how bad the landslides were following the earthquake and how cars were being looted for supplies.

Our team was so desperate to get in to help, but we were so helpless due to the post-earthquake conditions. We started praying for the journey, interceding for God to make a way for us. And God heard our prayers. We arrived in Palu on Oct 1 at 2am.

We drove past the location where the tsunami had destroyed homes and where ships had been washed up ashore. There clung the smell of death. Prior to this trip, I had just returned from New York City, where I was serving in an urban ministry—I had seen murders and gunfights in the inner city, so I thought, “I got this.”

But I could not be more wrong.  Nothing could have prepared me for what I was about to witness. 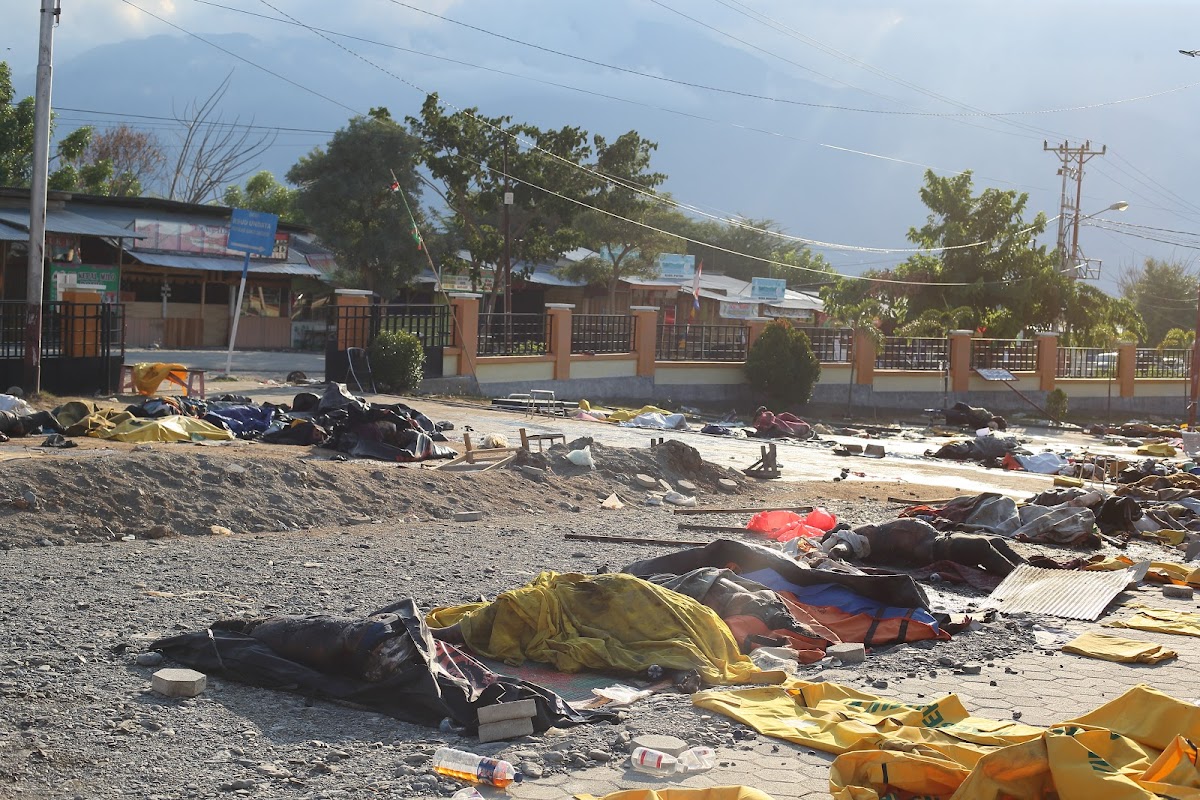 When it was morning, we went to check out the extent of the damage Palu suffered. What greeted us were the smell and sight of thousands of dead bodies—to this day the odor and nightmarish sight are burned into my memory. They say, “to whom much is given, much is required”. But it was hard, facing our fears and the expectations and hopes of the people who needed us. What stopped me dead in my tracks was the sight of the feet of a little kid who had been crushed when his house collapsed as he was sleeping.

People were desperate for water, food, anything. Looting was rampant. When the medical post that had been set up where we would serve began to tend to the wounded,  I was reminded of Hillsong’s worship song “Hosanna”—“Break my heart for what breaks Yours”. Compassion filled us. We smiled, yet there was a churning in our hearts and stomachs as we sat listening to each survivor’s story. We told ourselves: one soul at a time, one life at a time. Yet in face of this devastation, we felt powerless.

I cleaned the wound of a little girl couldn’t have been more than 10. Her body was filled with cuts and open wounds. She sat there in silence, not once complaining about pain. While applying medicine to her wounds and blowing on each spot, all I could really say to her was, “I am sorry.” 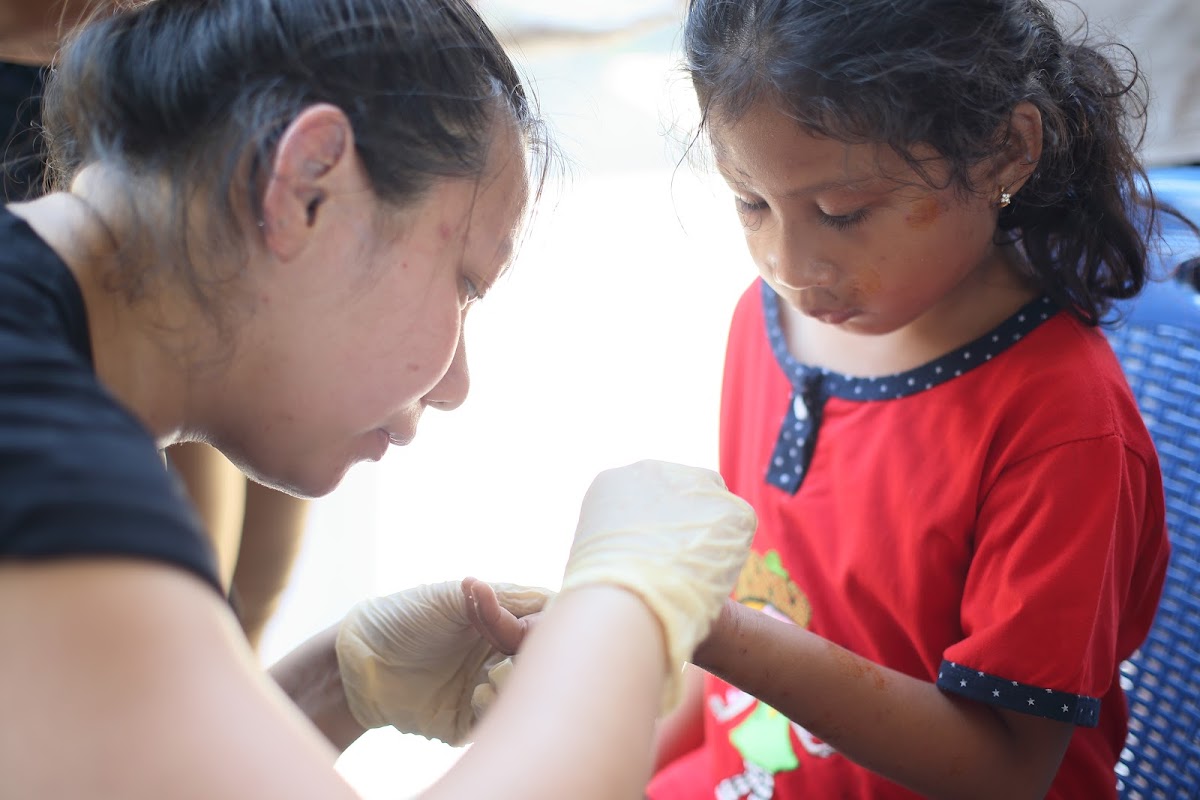 I felt we were the only ones who could represent Jesus in those moments. Every interaction we had with the people there reflected the Christ who lives in us. We were to be the light of this city, bringing His glory, peace and hope to them. More than ever in my life, I so desperately wanted to reflect God’s love for these people.

Being the only girl on the team meant that I had to try and be there for every woman and kid who came into the clinic. One lady came in with three big holes in her feet. While the doctor was cleaning her wounds, she was gripping my hands, screaming in pain.

My heart felt like it was shattered. I felt ashamed of myself for all the times I was selfish. I used to live in my own world of self-entitlement, trapped in my own box of depression, in the prison of my own complexity. Their screams showed me the fight they had in them. It dawned on me that I am actually not that big a deal, that I am small.

We all know that we came to do what we had to do. We made friends with the locals, talked to them, invested in their lives. I know that we have rewritten their stories. Their scars will one day tell the story of God’s redemption.

TO SERVE GOD WITH TOTAL ABANDONMENT

Sleeping outdoors for nine nights was not fun. The ground was hard, and we were a feast for the mosquitoes. One morning, I woke up with a mosquito bite on my eyelid, and the guys burst out laughing when they saw me. There were nights that the aftershocks were so bad they woke us and kept us awake.

One night before we went to bed, Pastor Kenneth revealed to us that 500 prisoners had escaped from the Palu prison and the city was in a mess. As a girl who watched dramas and read the news, I felt the spirit of fear hover over me as girls tend to be the easy victims. But as we gathered and prayed, God’s peace was with me.

Being trained in children’s ministry, my pastors and leaders always taught me to love everyone and that children are our future. One of the better parts of this trip was that I got to play with little ones. 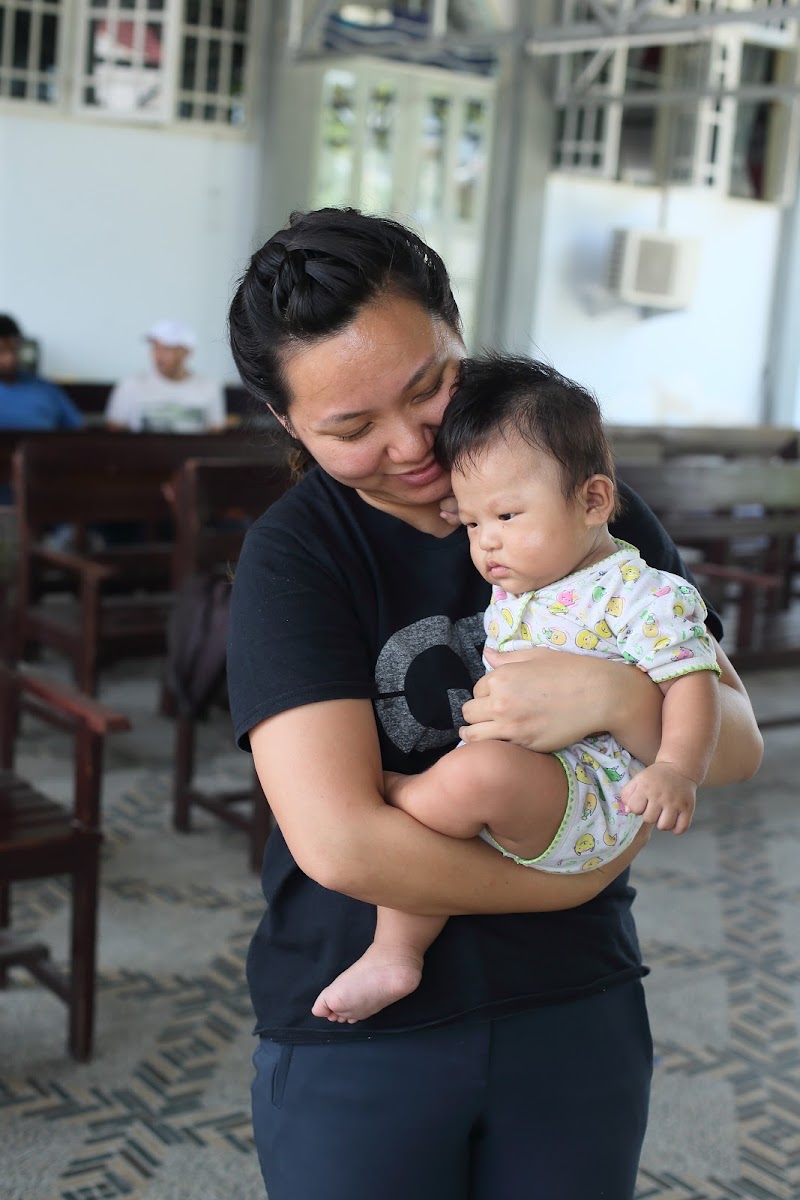 I gathered up the kids from the community, and with limited resources, we started making paper planes and paper balls for games. My team member, David, bought lots of candies for the kids. In times like this, I’m glad we could be a source of comfort at a difficult time.

I went out to get medical supplies one day with another team member, Daniel Poh, and we chanced upon a shop which sold balls. We happily bought 10. The shopkeeper was puzzled as there was a shortage of food and water, but two random Singaporeans went in and bought a bunch of balls. While walking back, we went to every house with kids and blessed them each with a toy. The guys on the team were always joking that I only had a heart for the kids.

Pastor Kenneth and the other three guys on the team always covered my back. It was then that I fully understood the meaning of “every joint supplies”. Each of us was good at different things, yet, we could do all things in Christ who strengthens us.

This trip taught me what it means to serve God in total abandonment and obedience to Him. I also learned that in the face of my own fears, I can still choose to do the right things. I learned to exercise reckless faith in God and trust that He is the One who holds my life in His hands.

Five years ago, I was lost and suicidal. Pastor Kenneth and his wife, Vivien, took me in, taught me the ways of the Lord, and used their lives to show me that I needed to be ready to answer the call of God and obey His words. They showed me, with their lives, how I can serve not just those who need help, but also those fighting alongside me, and those above me. They showed me the face of God, and how to carry His light even in the darkest night.

The weakness of my humanity haunts but it will never be greater than His love. What a privilege it has been to be able to serve God and literally stand in the gap between the living and the dead. Even greater a privilege is knowing that God could have chosen anyone else, but He chose us to be there at this time.

Finally we were due to fly home. The wait at the airport was nerve-wrecking. It felt like five hours before they finally called for Daniel and me. We were both so excited to be flying a propeller plane, but we were so exhausted we fell asleep the minute we took off.

At the airport in Makassar where we were to make our connecting flight home, we met a girl whose parents had been killed in the earthquake. She had been swept away by the tsunami, but survived by hanging on to a pole. After the tsunami subsided, she walked for three days before she found her relatives. 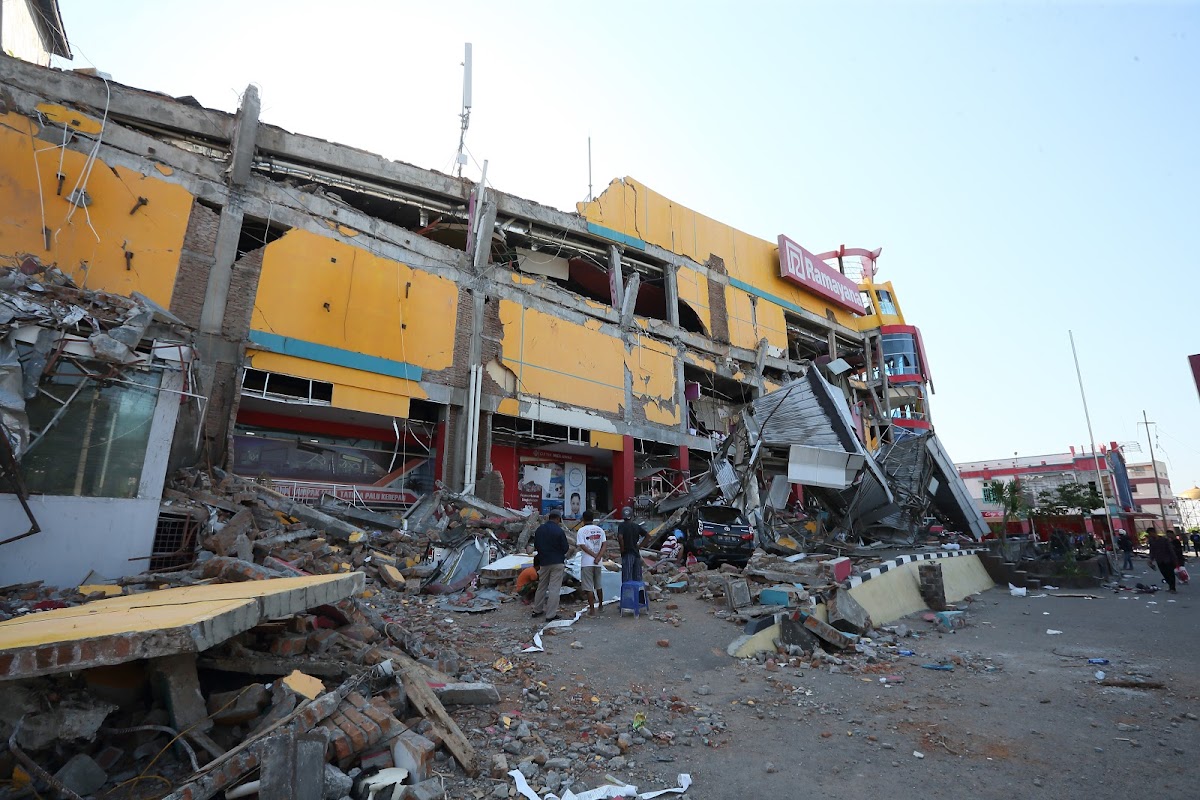 Amazingly, she encountered Jesus on her way back—she was unscathed despite all that she had been through. When she finally met her relatives, they brought her for a check-up at the medical post we set up. Her aunt  thanked us for all that we have done. We were so moved.

We all know that we came to do what we had to do. We made friends with the locals, talked to them, invested in their lives. I know that we have rewritten their stories. Their scars will one day tell the story of God’s redemption.

I thank God for the friendship I have built with the team—friends who have become family. I know in my heart whatever the devil meant for evil, God has turned it around for good through us, His people.