Knowing exactly who you are in Christ will set you on the right path towards your God-given destiny, so preached Aries Zulkarnain on the final day of Emerge Conference 2018. 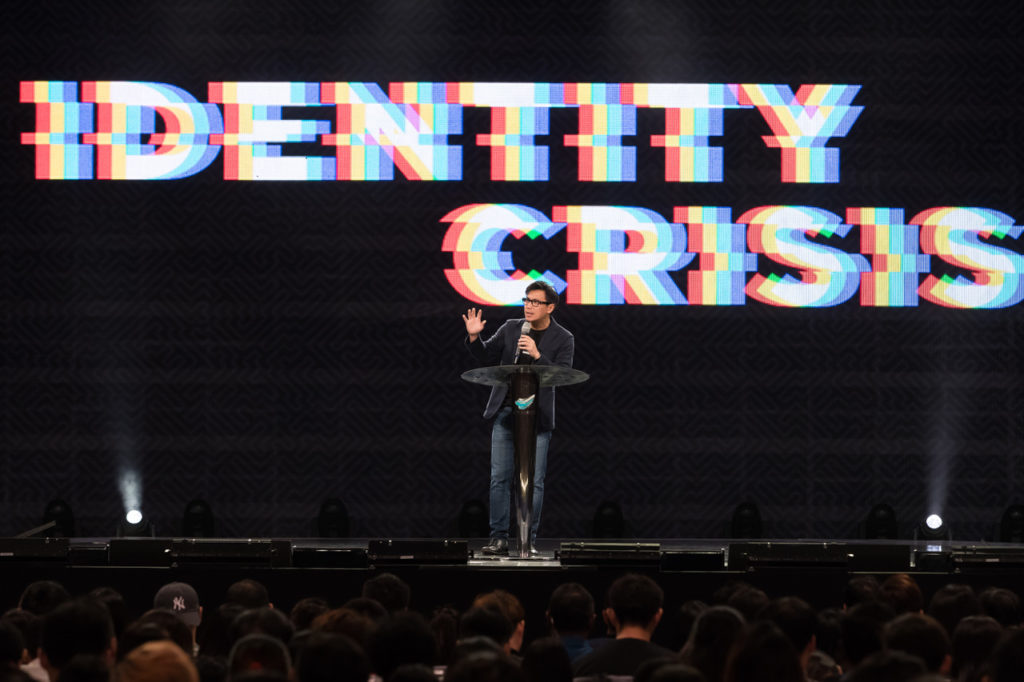 It is not every day that you see thousands of youths gathered before a stage on an early Sunday morning, praising and worshipping God with deep fervency.

On the third and final day of the Emerge Weekend (Jul 15), the service began with electrifying praise and worship, followed by a video of youths in action–how the young people of City Harvest are serving the Kingdom of God in different ways and breaking stereotypes people have of the millennial generation.

CHC’s executive pastor, Aries Zulkarnain preached a message on identity, based on Romans 12:1-3.

The dictionary definition of an identity crisis is a period of uncertainty and confusion when one’s sense of identity is insecure, typically due to a change in their expected aims or role in society. Zulkarnain quoted the late preacher Edwin Louis Cole, who once said, “If you don’t define who you are, someone else will define it for you.”

Zulkarnain shared three things the church needs to understand to avoid and overcome an identity crisis.

Referring to Romans 12:1, Zulkarnain reminded youths to “embrace what God has done” for His believers. “Only when you are transformed, can you transform society,” he said.

In Jeremiah 1:5, the Bible said that God called Jeremiah to be a prophet over the nations before He formed him in his mother’s womb. Zulkarnain pointed out that God gave Jeremiah his identity before he was even born!

“You see, all of us see ourselves coming into this world in this order: we are born into this world, and then we become a being. When we see birth as the first order of being, we form our identity from that point,” the pastor explained.

“But is that how God sees you? No!” Zulkarnain declared. “The Bible says the order is this: God created you first in His mind, then you are born into this world, and then you become a being. Your identity is set at the time of God’s creation. Young people, Who has the power to define you? The Creator God!”

Next, Zulkarnain looked at Gideon in Judges 6:11-15. While “Gideon” was his earthly identity, the angel called Gideon a “mighty warrior” (Jud 6:12), which is his heavenly identity. However, verses 13 and 15, showed that Gideon refused to believe what God had called him to be because he formed his identity according to his natural circumstances and family status.

“A wrong identity will distort the image of God in your life, and that’s why people run away from God,” Zulkarnain explained. “God wants to set your identity right—not from your earthly identity, but from His creation identity. An intimate relationship with God is both the beginning of our identity and the ultimate end of our destiny.” UNDERSTAND WHO GOD IS

The most important characteristic of God is that He is love, and He loves His people unconditionally.

“God blesses who you are but He cannot bless who you pretend to be!” Zulkarnain pointed out, inciting laughter from the congregation. “This means that God can only love you when you stop hiding your feelings or identity.”

He went on to share that shame stops people from sharing their brokenness. “But the more you hide or keep your struggles, the more they become a stronghold,” he noted. Sharing from Psalm 37:5-6, Zulkarnain encouraged the congregation to open up to God so that He can touch them.

UNDERSTAND WHAT GOD HAS DONE FOR HIS PEOPLE

Finally, Zulkarnain emphasised how crucial it is to understand what God has done for His children.

“The world tells us that we need to earn everything in life,” Zulkarnian said. “But that is the mentality of an employee. Yet God sees us as His sons and daughters, not as His employees.”

Instead of trying to win God’s love through performance, the pastor encouraged the church to have a relationship with the Father.

The pastor concluded his sermon by comparing the sons and the slaves of God (Galatians 4:4-7). He reminded the church to have the mentality of a son and not that of a slave.

The service ended with an altar call for those who have been putting up a front when they go to church. With love, Zulkarnain prayed for the congregation to be who they are in front of God, so that God can rain His blessings on each individual.

As Emerge youths gathered at Suntec Singapore for the final session of the three-day Emerge Conference, there was a deep sense of hunger in the atmosphere. Even before the session started, youths rushed down to front of the stage, ready for praise and worship. When praise songs rang through the hall, all one could see was the sight of enthusiastic youths jumping and praising God with all their might. After that, the lights dimmed, and the dance production began. Members and friends filled the seats from the floor to terrace areas. Some were supporting their friends at the production, while others arrived to watch a good show.

传人tells the story of a martial arts grandmaster handing over his school, Freedom Fighters, to his disciple Shao (Derrick Ng). As Shao took over the school to compete against other dance troupes, he failed to sustain the Freedom Fighter’s 10-year long legacy of the championship. The story goes through how hope is lost and finally regained when Shao finds a new group of willing disciples and passes on the baton to the next generation.

Throughout the performance, members of the audience were not at all stingy with their shouts of approval in reaction to the impressive martial arts moves and plot twists. When Shao rode a bicycle across the aisles of the hall towards the stage, every eye and neck followed after him.

As the 40-minute dance production concluded on a rousing note with all the dancers on stage, the supportive crowd responded with a standing ovation.

Wu Yuzhuang, CHC’s executive pastor, then went on stage to preach a short evangelistic message. Using the story of Adam and Eve falling into sin, Wu reminded the youths that when people try to control their own lives, all kinds of problems arise. When Adam wanted to manage his own life by eating the forbidden fruit.

But even when Adam fell into sin, God helped Him and Eve by killing an animal and clothing them with its skin. Wu said that it was a picture of how God would one day send His only Son to die for humanity so that they may be saved (John 3:16-17).

Ng Tai Ming, a 23-year-old team leader in business support and product inventory, was deeply impressed by the dance production. “First of all, my friend got saved!” he said excitedly, adding, “The dance production made me think about my own life. It reminded me that I must not give up when I’m facing difficult circumstances. There are always people out there who will encourage and bring you back up.”

As the afternoon ended with an altar call for sinners and backsliders, 140 people gave their hearts to Jesus.