After a three-year hiatus, RAVE camp is back! This year’s outing sought to build unity among Polytechnic students from various campuses. “Only what is done for Christ will last.”

This statement made by City Harvest pastoral supervisor Wayne Choong  became the cornerstone of of RAVE camp, which took place on Sentosa from Mar 14 to 16.

RAVE camp began as an initiative by the cluster of Polytechnic youth in CHC, called Emerge Poly Society. These youth believed in championing a vibrant campus life, inspiring Polytechnic students to hold on to their dreams and aspirations. First organized in 2014, RAVE camp is a highlight for this group of Polytechnic students, a time for them to get to step of their comfort zone and encounter God with freedom. The theme for the first day of RAVE camp was wisdom, and activities centred around making wise decisions. The camp kick off at Siloso Beach on Sentosa, where all the campers gathered in their respective houses, Tamani and Renegades. The house leaders were dressed as Red Indians (Tamani) and Cowboys (Renegades), mascots for their respective houses.

After both houses had drummed up the atmosphere with their house cheers, the campers sat in circles according to their teams and were blindfolded. The narrator started the game by reading a story about the Red Indians and Cowboys, while flour, eggs, and ketchup were rained down upon the campers. The committee members made sure nobody came away clean.

Right after the icebreakers, it was time for some Gold Hunting. The campers, playing in teams, had two hours to complete nine station games. It was a battle between two houses to get path cards and power cards to find the gold. The first house to find the gold would receive 1000 points while the second house would receive500. However, since RAVE Camp 2017 focused on solidarity, both houses decided to work together to find the gold!

That night, Choong preached about eternal reward and judgment. He challenged the youths to live their lives with an eternity mindset and encouraged them to find out what God wants them to do with their lives. Choong also shared his own testimony of how he kept on serving the Lord and sharing the word of God despite being ridiculed by his friends with labels like “uncool” and “holy”.

“I am young once and I want to give the best days of my youth to God. This is the best gift we can give to Jesus,” he said. On the morning of the second day of the camp, CHC pastoral supervisor Catherine Lee shared about the importance of staying connect to Jesus Christ to survive spiritually. Many campers were impacted and recharged by the session.

Kaz Foo, 17, a first-year Polytechnic student said, “My favorite parts of camp were the night session and morning devotion because the presence of God was amazing. He came down to touch His sons and daughters. Being able to experience that was a great honor and blessing.”

After a great time dwelling in the presence of God, campers proceeded to another series of station games at Jurong Central Park. As the theme for day two of RAVE was boldness and courage, the games challenged the campers to step out of their comfort zones and conquer their fears. Some of the stations required campers to catch live frogs and pick out coins out a box of mealworms! The campers showed great excitement and unity despite being under the scorching sun.

“When the campers first met on the first day, it was obvious that they felt awkward with each other,” noted camp commandment Val Foo, 20. “By the second day, it was clear to us that we had met our objective of building unity when we saw our campers cheering for the other house during games and giving each other encouraging cheers when a team lost a game. That is the spirit of solidarity!”

“The more time you spend in prayer, the more you carry the presence and power of God,” he said. 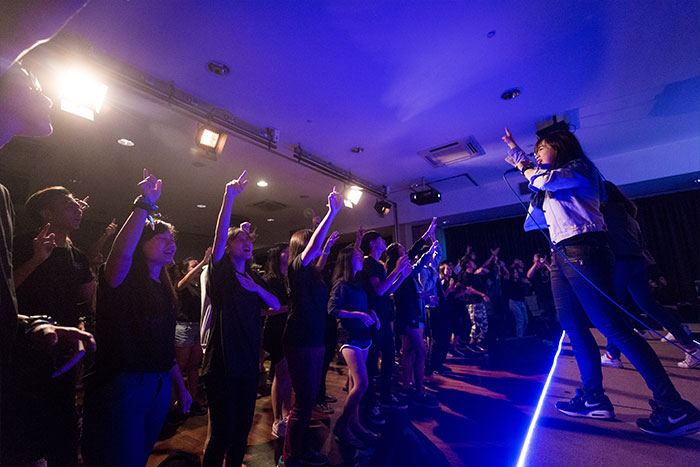 The third day of RAVE camp started with a powerful morning session where Choong prophesied over the leaders of the five campuses. The pastoral supervisor reminded them that God has a unique plan and calling for each of their lives. The campers split up into their campuses after that and each campus leader shared the vision for their campus. The morning session ended with a time of prayer.

Charged up after prayer, the campers proceeded to the last round of games that tested their strength and endurance. Despite the ongoing competition between houses, unity was still evident amongst the campers.

On the finale night, CHC pastor Edmund Tay taught the youth on the ways to become a disciple of Christ. The night ended with a powerful time of ministry, with campers coming before the Lord on bended knees and hearts of surrender.

When asked what they enjoyed the most at Rave camp this year, most replied that night sessions were the most significant part of the camp.

“During all the night sessions, God spoke and strengthened the calling for me in my campus,” said Jeremy Shao, 20, a third-year Polytechnic student. “I was challenged to believe for greater things for my campus. After the camp, I just a felt a need to go deeper to lead the campus into revival.”