Author of Man In The Mirror, Patrick Morley tells City News what it means for Christian men to excel in life. 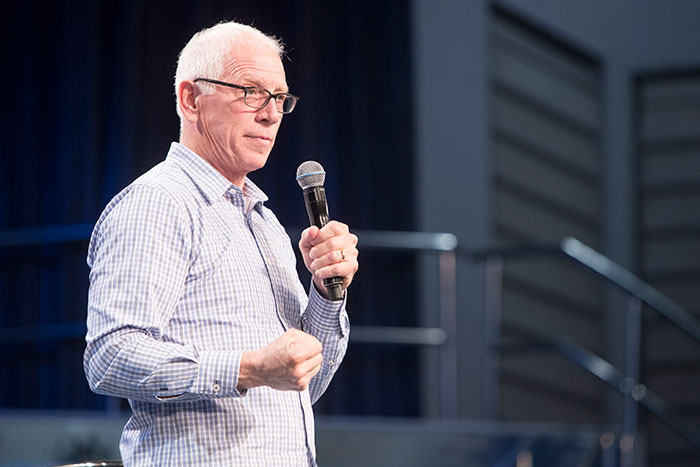 Author, businessmen and Christian leader, Dr Patrick Morley has been conducting Bible study every Friday since 1986 and has reached approximately 10,000 men worldwide. He founded Morley Properties in 1973, hailed as one of Florida’s top 100 largest privately held companies. Today, Dr Morley focuses his time on discipling Christian men and empowering them to have deeper relationships with God. Singapore was Morley’s third stopover in his five-country ministerial tour. Morley also ministered at City Harvest Church’s men’s meeting.

City News: With the current challenging economic outlook, many people are under a lot of pressure to perform, or even to keep their jobs. How should Christian men respond to such situations?

Dr Patrick Morley: Christians should understand four things. Faith, that God is able to take care of me and my family. Trust, that God is sovereign that whatever is happening to me doesn’t take God by surprise. Prayer, to ask God for the help that I need. We just stand back from there and watch Him work on our behalf. Lastly, hard times are good for us. Suffering humbles us to seek God that success makes us think that we don’t need Him. Romans 8:28 tells us that [the situation] may look like a bad thing but God will use it to create something good out of that.

Have you ever had to compromise your faith when making an important business decision?

There are two kinds of decisions. Decisions that deal with priorities, and decisions that are moral decisions. Priority decisions are decisions between two rights like choosing between a red car and blue car, or marry this lady or that lady. Moral decisions deal with right and wrong. I know this may sound like I don’t understand what is going on. But I would just encourage everyone to never compromise on their integrity. Really trust that God will take care of you and will provide for you.  I have a friend in the US who worked in a paper products company and his boss wanted him to create two bills (invoices) for one job. He said he wouldn’t do it. They fired him and he lost his job—but he could live with himself. [It’s important] to look at the man in the mirror and say that “I may have suffered from my decision but I have been faithful to my Lord.”

What are five ways Christian men can form a deeper relationship with God while wanting to excel in their career?

The first and most important thing that I would encourage a man to do is to read God’s Word for himself on a regular basis. I can actually say with 100 percent confidence that I have never known a man whose life has been transformed in a significant way without the regular study of God’s Word. Secondly, you need to be involved in one-on-one, cell group or discipleship group where you are doing life with other men. It can be in the form of a couple’s home group where the men get together once a month to talk about men things. There is no such thing as a lone ranger Christian. Third is active church involvement. We were created for relationships. Our kids, our wives and even we need to be part of a larger community of people. Fourth, you need to have some accountability. Finally, when you fill up on your relationship with Jesus, you should have a personal ministry too where you are serving others by using your spiritual gifts and talents.

How can we know if we are pursuing a ‘wrong goal’?

I think you have to go all the way back to the setting of the goal. If you are pursuing the wrong goal, you can meet it and still not know that it is the wrong goal. I define failure as succeeding in a way that doesn’t really matter. You can come to God with a plan and ask God to give you what you are asking for, or you can come to God with a blank sheet of paper and wait for God to help you shape that. I think both ideas are valuable but when you come with a pre-made plan, it’s very risky to kid yourself that you are hearing from God when it was really your own voice saying that it’s okay to do it. That is why we need a small group—with some brothers we can balance these things off. That’s why we need the Word. That’s why we need accountability because we give some brothers the ability to speak into our lives. By embracing the five ways that we can have a deeper relationship with God, we can also finetune what God wants for us, rather than what we want for ourselves.

What should be the ultimate purpose for every Christian man?

The highest honor is to be a disciple of Jesus. You think about all the people you would like to be like. Who do you want to emulate? Peter, Luke, James, John, Paul, Timothy—what were these men? They were disciples. They were not just disciples though; they were disciple-making disciples. A disciple is someone who is called to live in Christ, equipped to live like Christ and to live for Christ. The common denominator is Christ. Being a disciple is to do four things, to love God, to love his neighbor, to do the Great Commission and also to do the Cultural Mandate. So we take care of the culture but what we are doing is build God’s kingdom. It doesn’t make a difference what we are talking about whether is it business corruption, fatherlessness, divorce or racism. Making disciples is God’s designated way to release the power of the Gospel on each and every problem that we face.

Men’s Meeting With Bishop Dale Bronner: Your Past...

Waking Up To Godly Manliness