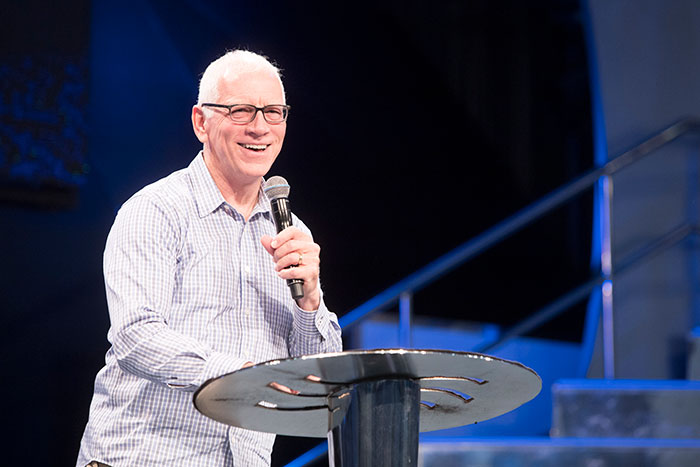 “Money will solve my problems and success will make me happy.”

That was the philosophy Dr Patrick Morley subscribed to, but it did not bring him any closer to the realm of happiness as he later discovered. The 68-year-old Christian leader and successful businessman was in town at the end of October 2016 to minister to the men of City Harvest Church on what it means to live a life of purpose.

Morley started Morley Properties, a real estate development company in 1973, the same year that he wed Patsy, his wife of 43 years. The company would go on to become one of Florida’s 100 largest privately held companies. Morley gave his all to the business, achieving goals, setting even bigger goals, and meeting those too. “I was meeting all my goals but instead of making me happy, they [felt like] hollow victories,” he said, adding that success is a disease of always wanting more but never being satisfied.

In spite of being the envy of his friends, Morley was an emotional wreck on the inside. Venting his frustrations out on Patsy behind closed doors, Morley was at a loss as to why Patsy’s life was a stark difference from his own. His wife believed that Christianity was following a set of Christian values while the latter pursued Jesus Christ. Morley gave his life to Christ in 1984.

But there was work to be done on Morley’s life. “I tried to have the best of both worlds—what Christ has to offer and what the world had to offer, and I realised that I was starting to become ‘dangerous’ because I was cherry-picking verses that went in the direction that I wanted.” With that, Morley made a recommitment to surrender his earthly life to the will of God in 1986. Morley challenged his audience that night—comprising men from City Harvest Church—not to reinvent God to fit their mold. There is a god believers want, and a God Who is. They are not the same god. The turning point in our lives is when believers stop seeking the god they want, and start seeking the God Who is. Believers discover the God Who is when they read the bible everyday and become a disciple of Christ. Beyond being disciples, believers need to be disciple-making disciples. “The Great Commission of Jesus is not just to ‘come and be discipled’, but also to ‘go and make disciples’,” Morley explained. “If we want to change our lives, we need help others change their lives.”

To make the session more productive, Morley got every man to commit to small group studies between three and four people for the next six weeks. The small group study allows all men to contribute to discussion of key Christian and career topics.

Kelvin Chew, 44, a business owner shared, “I felt that this (small group study) is a good initiative where we gather all the men to build up each other and make disciples. We can also shorten our learning curve as we learn from one another.”

“What struck me was when Dr Patrick spoke about spiritual fatness,” said Sean Chua, a research assistant. “If all we do is receive and not give, we will become [spiritually] unhealthy. We should all have a means to bless others so that we can receive more.”