Men’s Meeting With Bishop Dale Bronner: Your Past Has Prepared You

Bishop Dale Bronner empowered the men of City Harvest Church with a word on how the past prepares one for the future. “Your past does not define you. Your past prepares you,” said Bishop Dale Bronner, speaking to an all-male audience at City Harvest Church on Jun 23, 2017. “It prepares you for everything that you will encounter in your life from this day forward.”

The founder of Word of Faith Family Worship Cathedral spoke at the highly anticipated CHC men’s meeting. A preacher known for his axioms and extensive vocabulary, Bronner delivered a message about the power of the past.

The past, more than just a learning experience, is for God to bless someone. And in turn, they might be a blessing to others.

Your Past Does Not Define You

One develops a perspective from the past and uses that to empower the future, Bronner said. “Your past does not define you; your past prepares you. Don’t allow yourself to be defined by where you came from because the power to define is the power to determine destiny. People can’t judge your capacity and your potential by where you have been. You never judge anybody’s potential by looking at their past. Your potential is never based on what you have done; your potential is always based on what you haven’t done yet.”

Failures and mistakes will teach more than success ever will, Bronner declared. Where sin abounds, there you will find grace, he said, referencing Rom 5:20.

According to Bronner, it is not where a man is at that forms the basis of power, but where he has been. He gave an example of Moses meeting the Pharaoh in the Book of Exodus. “When Moses got ready to stand before Pharaoh, the power was not where he was standing before Pharaoh, the power was where he had been. He had been with God on Mount Sinai at the place of the burning bush,” he explained. 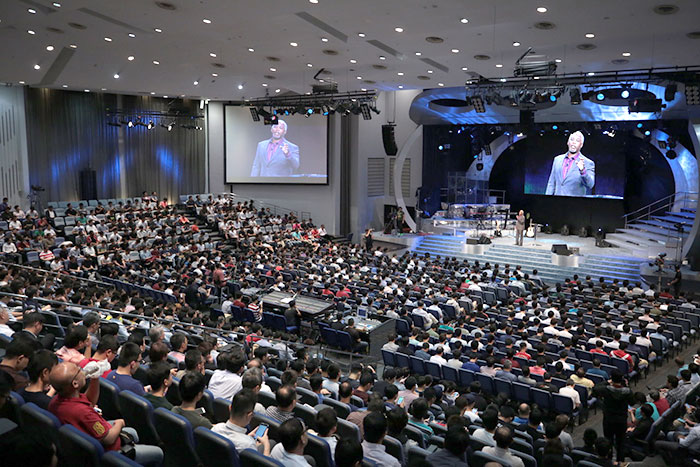 God Gives Seed To The Sower

If a man wants to transform his life, he must have faith that God has done something already. He must not wait until it happens before praying and believing.

“Wouldn’t it be silly for me to have a handful of seed and then just be standing there asking God to bless me?” he stated. “God gives seed to the sower. That means if I don’t sow anything, I have nothing to expect.”

Success, Bronner taught, should not be measured by the size of the harvest, but by the seeds sown. It will be missing the point to measure success by how many were led to Christ rather than how many Christ was shared with. “If the farmer is faithful in getting the seed to where it needs to be, then it will do what it needs to do,” he said.

Bronner went on to explain the importance of measuring success by the seeds sown. One sows, another waters, and God gives the increase, he said, citing 1 Cor 3:6. What that means is that what God might get a man to do in one stage might just be the seed, and someone else might be the person who waters or harvests.

With that in mind, when a man wants the power of God, he must get down on his knees.

“It moves the heart of God when men pray. When men pray, something miraculous can begin to happen. If you really want to know if you have something from God, the devil will fight you. If there is no power in it, he will not try to discourage you from it,” Bronner declared. “By praying we can change the atmosphere of our household.”

Bronner reminded the men that in the Old Testament (Josh 10), God caused the sun to stand still when He listened to Joshua’s prayer.

God will not be able to do anything through a man if He has not done something in him, said Bronner. He cannot and will not make a man do right, but He will make him wish that he had done right. And it is what he has been through that God will use to bless other people. That, Bronner taught, is where a man’s ministry is born — God will not give a gift that is not needed. And that ministry is to find where the hunger for that gift is. He explained further, saying, “Because if I have food for you, and you have no appetite for it, then you won’t eat it anyway.” “Isn’t it amazing that God would use ravens to feed the prophet Elijah?” Bronner marvelled, making reference to 1 Kings 17. “It is against the nature of a raven to share its food. And yet God commanded the ravens to take their food and give it to the man of God. They have a ravenous appetite!

“You have to stay hungry. No wonder God said, ‘Blessed are those who hunger and thirst after righteousness’. Because hunger draws God. That’s why when you really need God, go on a fast. If you ever need God to supply spiritual food to your life and begin to bring nourishment to your soul, fast. Because hunger attracts God.”

Bronner continued, noting that starving and hunger are not the same. “Now there’s a huge difference between hunger and starving. Starving doesn’t attract God, hunger does. There are people who are starving for Jesus but they are not hungry for him. They are destitute for him, but they have no appetite for him. When you have hunger, you have a strong appetite.

“Have you ever seen a person wasting away, dying of cancer; their bodies frail and thin, gaunt in their appearance; because they have no appetite and they are starving? Their body needs nutrition but they don’t hunger for it. You get sick, you have no appetite, you won’t eat, you’re not fasting. You’re starving because you’re not hungry. So there’s a blessing in even having hunger.

Besides staying hungry, it is important to stay humble. This is because pride precedes a fall. “I have never seen a man fall while on his knees,” quipped Bronner. “When you are on your knees, there’s something stabilising about your life. And maybe this is why the Bible says, ‘Men ought always to pray.’”

The tactic the devil uses is to keep people busy on their feet so that they will have no time to get on their knees. Stress, anxiety, and frustration, Bronner cautioned, is a call to prayer; they represent bigger things that a person cannot accomplish by their own strength. This call to prayer is also a call to humility, as a place of dependency on God. “Man likes to say, ‘I did it myself’. And God wants us to say, ‘I can do all things through Christ who strengthens me,’” he said.

Lastly, Bronner told the audience, it is also important to stay honest. “You will not know who people are until you give them power. Absolute power corrupts absolutely,” he pointed out. “Power will expose what is in a man’s heart. If he uses his power for good, it tells you what is in his heart.”

On the topic of doing good, Bronner used the example of the woman who built an additional room and furnished it for the prophet of God, Elisha. The room, mentioned in 2 Kings 4:10, is made up of a bed, table, chair, and lamp. Bronner interpreted these pieces of furniture to represent the only necessities a man needs: a bed to rest, a table to eat, a chair to study, and a lamp for illumination.

To change his life, Bronner said, a man needs to change his “hat”—an acronym for habits, associations, and thoughts.

“Listen, if the devil hasn’t opposed you, it means you are walking in the same direction as him,” Bronner said of bad associations, drawing laughter from the crowd. Fearfully and Wonderfully Made

Returning to the theme of the message, Bronner linked staying honest to staying true to one’s identity. Authenticity lies not in living according to how one is raised, but by how one was made. Just as how the past should not define someone, labels too can be a dangerous tool. Bronner used the stories of Jabez, Benjamin, and Jacob as examples of the significance labels have on a person’s life.

In 1 Ch 4:9-10, it is written, “Now Jabez was more honorable than his brothers, and his mother called his name Jabez, saying, ‘Because I bore him in pain.’ And Jabez called on the God of Israel saying, ‘Oh, that You would bless me indeed, and enlarge my territory, that Your hand would be with me, and that You would keep me from evil, that I may not cause pain!’ So God granted him what he requested.”

Jacob’s wife, Rachel, died on the way to Bethlehem. While in labor, she named her son Benoni, ‘the son of my pain’. But Jacob rejected that name and changed it to Benjamin, ‘son of my right hand’ — a symbol of strength.

“Maybe this is the reason why Jacob refused to have his son named pain: because he had lived with a painful name all of his life,” Bronner suggested. The name “Jacob” means “supplanter or deceiver”. He had manipulated his brother into giving up his birthright and tricked his father into giving him his brother’s blessing. In the end, when he wrestled with an angel all night for a blessing, what Jacob got was a new identity.

Jabez did not pray for God to keep the evil away from him, Bronner said, alluding to how God kept Adam and Eve away from the fruit and not the fruit from them. If a man has an inner change, no temptation outside will cause him to waver and sin.

In the same way, Bronner exhorted the audience to ask God to do something great in them. More than that, they should ask to be blessed so that they can be a blessing to others.

“We cannot ask God to allow us to export fruits that are not homegrown—China cannot export what is not grown or made in China,” explained Bronner. “Ask God:  ‘Do something great in me so that You can do something great through me.’”

The conclusion resonated with those who listened.

Israel Chua, 28, a game designer, shared, “One thing I learned from the message was how to change your hat — your habits, your associations, your thoughts.v

For Shaun Lim, learning about the impartation of the Holy Spirit was the key lesson. The 20-year-old polytechnic student said, “How the Holy Spirit works, is not just during a meeting. But He imparts to us before and after the meeting as well. And we must be sensitive to Him during those times as well for Him to move.”