Believers cannot have a wonder-working Father without a slice of divinity in them. Therefore as sons of God, Christians must live and operate in the supernatural. He was encouraging the members to walk in signs and wonders, a message he had begun preaching the week before.

Just as King David always looked for God, wanting to experience His power and glory in Psalm 63:2, Kong encouraged the church to discover and declare the power and glory of God every time they enter the sanctuary of God.

Kong pointed out three major events in the life of a Jewish boy that lead him to become a son of his house. At eight days old, he is circumcised and becomes a “covenant child” of God. At 13, he celebrates Bar-Mitzvah, after which he is held accountable for learning and keeping the commandment of God. Only when he reaches 30 will he will be recognized as a mature son, one who is able to take up the responsibility of the power of attorney to act on behalf of his father. 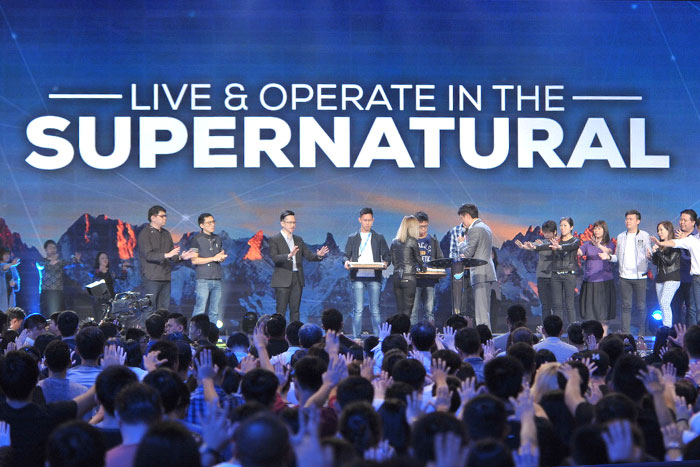 Even Jesus had to grow into His son-ship before He could have the authority. At 30-year-old, Jesus was baptized and God openly declared that Jesus was His Beloved Son. From then on, the Spirit of the Lord came upon Jesus and He performed miracles, wonders and signs.

“The seal of Jesus’ son-ship is the supernatural,” said Kong. “We know that He is the Son of God when we look at the miracles, signs and wonders that God did through Him.”

Kong emphasized that Christians cannot have a wonder-working Father without themselves having a slice of divinity within them. It is the supernatural that validates their redemption. Romans 8:18-19 says, “For I consider that the sufferings of this present time are not worthy to be compared with the glory which shall be revealed in us. For the earnest expectation of the creation eagerly waits for the revealing of the sons of God.” All creation is waiting for the manifestation of the sons of God. As such, Christians have to be filled with the Holy Spirit and with the anointing—this gives them revelation, power and dominion

However, the anointing only comes with total obedience of faith to the Word of God and total consecration. Nothing put the people of God more in command than the Word of God, Kong taught.

“When the Word of God becomes a revelation to us, we will experience it, and taste it.” Kong went to share the testimony of Amy Tan, a staff member of City Harvest Church. A routine health check showed that the cancer markers for her breast and ovary were very high. After a more detailed scan, the doctor found an unusually large and complicated mass of around seven centimetres in her breast. She was warned that the cancer might have spread to her lymph nodes and the surrounding tissues. While the doctor recommended that she remove the mass, the doctor was worried that Tan, who has an unusually low blood count, would not be able to handle the operation.

Tan asked her colleagues and friends to pray for her. She listened to sermons of healing and confessed healing in order to build up her faith. During the operation, the doctor removed the tumor and found that the cancer looked as it had gone through chemotherapy and had shrunken and died. The doctors could not explain what caused the cancer to die on its own and Tan could only tell them that she prayed.

Kong said, “Miracles like this must become more and more common to us, but one would require 100 percent obedience of faith.”

Even Jesus who was totally sinless had to humble Himself and learn obedience. This does not mean that Jesus had to pass from being disobedient to obedient, but it meant that He chose to submit Himself under the will of God and to bear the painful consequences of it.

Besides the obedience of faith, Christians also need to have a perfect heart towards God. 2 Chronicles 16:9 says, “For the eyes of the Lord run to and fro throughout the whole earth, to show Himself strong on behalf of those whose heart is loyal to Him. In this you have done foolishly; therefore from now on you shall have wars.”

Kong taught that Jesus came into son-ship when He was “declared to be the Son of God with power according to the Spirit of holiness, by the resurrection from the dead” (Rom 1:4). Son-ship and power go hand in hand and only come with holiness, that is, a hundred percent consecration to God.

The senior pastor ended the message with John 10:17 which says that Jesus has the power to take up his life again because he first operated in the power to lay it down in the first place at the commandment of God’s. He urged the congregation to move in the “power to lay down” and then they will see the blessings and abundance of God.

At the altar call, Kong encouraged everyone to move in the supernatural power of God. Quoting James 5:14 which says, “Is anyone among you sick? Let him call for the elders of the church, and let them pray over him, anointing him with oil in the name of the Lord”, Kong gave the leaders of the church bottles of anointing oil and laid hands on them. He then urged them to anoint the sick with the oil and see the supernatural power of God move through them.