What does religious harmony look like? A friendly game of archery tag between Christian and Muslim youths at the recent opening of the new Maarof Mosque in Jurong West. Bright and early on the morning of Aug 20, six teams of young men faced off in an intense battle of archery tag.

Following a brief coaching and practice session by trainers from The Fun Empire Singapore, the team members took part in a round-robin tournament, each team competing against another until the final two are left. 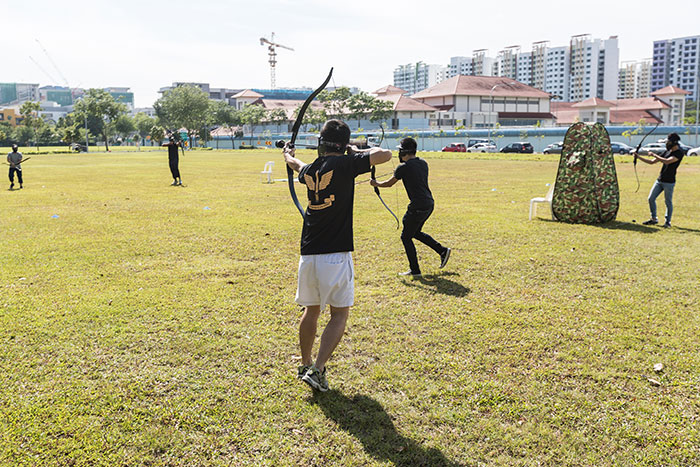 The archery tag competition was part of a three-day inauguration carnival that marked the opening of Maarof Mosque, at 20 Jurong West Street 26. It was officially opened on Aug 19 by Dr Yaacob Ibrahim, Minister for Communications and Information, who is also the minister in charge of Cyber Security and Muslim Affairs.

One of the teams was “Bold & Arrow”, which comprised four young men from City Harvest Church: undergraduates Bryan Lian, 24, and Justin Seah, 23; Lee Kang Wei, 23, a customer service officer and Titus Leong, 22, a full-time National Serviceman. The champion team was a group of polytechnic students, and the CHC team came in third.

Seah said, “Most of us didn’t know how to play archery tag, but we came here simply to have fun—it was an interesting experience.”

Lim Junxian, a pastor from CHC who accompanied the team said, “It was a privilege to be representing our church in the inauguration carnival of Masjid Maarof. Our CHC team was warmly received and was led on a building tour around the mosque by their Youth Development Officer, Mr Ashraf. In fact, we were the only non-Muslim group that participated in the archery tag competition. Our youths enjoyed themselves engaging our Muslim friends. We thank them for their kind invitation.”

The original Masjid Maarof was built in the late 19th century for the Javanese community in Kampong Jawa, and had stood there for 116 years before making way for urban redevelopment. The decision to name this new mosque in Jurong West after Masjid Maarof was in line with the Islamic Religious Council of Singapore’s efforts to create awareness of the important Singapore mosques that no longer exist. Meet & greet, CHC team members met various ones while being taken on a mosque tour.

Honorary Mosque chairman Rashid Ramli, 40, told City News: “There are two groups of people who are very happy about the opening of this mosque. Maarof Mosque is a recognizable name in the history of Singapore mosques. Those who knew the old Maarof Mosque previously located along North Bridge Road are excited that it is back. Also, the Jurong West residents have waited 15 years for a mosque in their vicinity. We are looking forward to have the mosque fully operational on Aug 22.”

The team from CHC was given a tour of the five-storey mosque, which was built in less than two years and sits 4,500 people in its main prayer hall. It boasts a variety of air-conditioned function rooms, modern audio-visual equipment, and facilities for the physically-handicapped and visually-impaired.

As part of the carnival, the mosque’s basement carpark was transformed into a bazaar where volunteers sold home-cooked food, drinks, apparel and accessories.

It was an eye-opening experience for Lian. “It’s my first time in a mosque, and it looks really modern. I got to understand a different culture today,” he said.

Maarof Mosque saw more than 3,000 visitors over the three days, including residents and tour groups from nearby Community Clubs, Residents’ Committees and Malay Activity Executive Committees. Over 80 staff members and volunteers were involved in the planning and execution of the carnival. Other activities held during the carnival include talks, free health screenings by Ng Teng Fong Hospital and a bouncy castle for the children. Muhammad Ashraf Bin Yusoff Subri, 24, the youth development officer at Maarof Mosque, said: “We are very glad to have City Harvest Church’s support for our event. I believe it’s high time that mosques and churches engage in interfaith talks and heartfelt sessions to realize our similar drive to bring people towards goodness, and not focus on our differences.”

“Living in Singapore, we thank God that for the freedom of worship and expression of our faith,” Lim told City News. “However, being in a multi-cultural, multi-religious society, it is important to be respectful and inclusive towards persons of other mainstream religions so that we can continue to progress and grow in our faith while maintaining religious harmony and be socially responsible to our community collectively.

“In Jeremiah 29:7, God told the Israelites living in a pluralistic society, through the prophet Jeremiah, ‘to seek the peace of the city, to pray to the Lord for it, for in its peace, you will have peace.’ Likewise, we need to seek and pray for peace and religious harmony in our nation. In doing so, we can continue to share the good news of the gospel and demonstrate the love of Jesus Christ in the nation of Singapore.”