At City Harvest Church’s 27th anniversary, senior pastor Kong Hee established the importance of having a vision from God, and the power that comes with it. City Harvest Church celebrated 27 years of adventures with God over the weekend of Aug 20 and 21. In true City Harvest style, the pre-service activities brought on an atmosphere of fun as video cameras panned around the hall capturing families, friends and cell groups as they struck various poses in celebration of the occasion. The musicians then took to the stage and brought the house down with a powerful and impactful time of praise to God, reminding the congregation that they are called to be the generation that will take the nations by storm. During the praise song “Heartbeat”, Cajon players and dancers pounded in synchronized rhythm, as if echoing the heartbeat of Jesus for His church.

Cell group leader, Matthias Yeo, was invited to share his testimony of overcoming a past filled low self-esteem and a lack of confidence to become a highly sought-after speaker in the Internet security industry. As a young man, he used to speak with a stutter. With the support of and encouragement from his cell group members, he started to give Bible study lessons to other members and share offering messages during cell group meetings. As time passed, he began speaking with more confidence. Today, Yeo gives talks to companies and at conferences worldwide. “It is by the grace of God that the very thing I feared has become my professional calling,” said Yeo with a laugh. A key highlight of the celebrations was a powerful and stirring performance depicting the struggles and despairs of life—the death of a loved one, an unloved child, a bullied individual—and how Jesus comes alongside the believer to carry him through. Integrating contemporary dance, drama, song and multimedia, the performance was a powerful call  church to remember that Jesus is present among the people, and that CHC must rise up from the ashes to press on in its call to be a city set on a hill that shines forth the light of Christ.

Sharing the Word, Kong Hee opened with 1 Corinthians 4:20, declaring to the congregation that the Kingdom of God is a kingdom of power. “We need His power to transform our lives,” said Kong.

EVERY POWERFUL ENCOUNTER IS FUELLED BY VISION Defining power as the ability to get things done and that being powerless means helplessness, Kong went on to teach that every powerful encounter is fuelled by a vision. A vision is defined as the unfolding of God’s divine plan and purpose. According to Habakkuk 2:2, a vision energizes the believer, giving him or her the power to run with—or fulfill—it.

Kong encouraged the congregation, saying, “When it is God who sends you out, no devil can send you back. When God shows you His plan and you walk in that plan by faith, the power of the Almighty God goes with you and you become unstoppable and indomitable!”

Kong challenged the church to let the calling of God rule in their businesses, profession, ministry, marriage and relationships. Quoting Romans 8:29-30, Kong explained that to come into God’s vision, the believer needs the Holy Spirit, the custodian of God’s vision for the believer’s life.

Kong read from Joel 2, unpacking the verse for the congregation. “They run like mighty men, this means they have energy. Everyone marches in foundation and they do not break ranks means that they all have tremendous love and unity. Even when they fall by the sword, they won’t be hurt.”

THE VISION HAS A VOICE 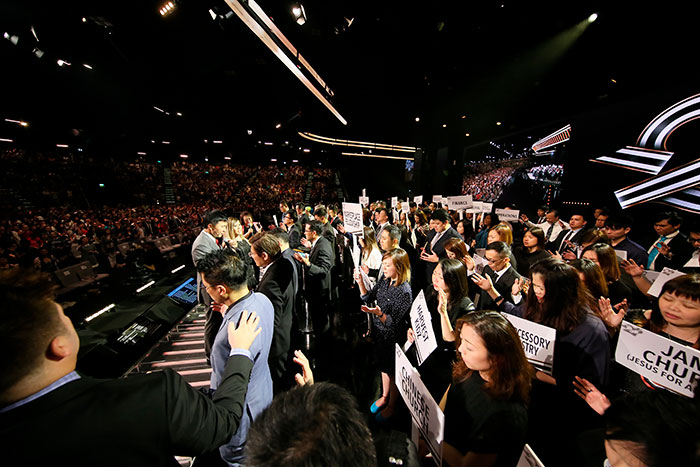 Quoting from Joel 2:11 that says, “The Lord thunders his voice before his army; for his forces are very great”, the senior pastor shared that it takes vision to experience greatness. He also encouraged the members to be patient in going through the learning curve, because “every divine vision will tarry and there will be demonic opposition.”

Expounding further, Kong shared that when there is a vision, God goes before the believer and with the believer; God works with, through and for the believer.

Urging the church to be confident that nothing will stop God’s plan and purpose from coming to pass, Kong shared the vision of God for CHC.

Two, the vision, fulfilled, will look like an army of trained disciples and workers. Nations previously closed to the Gospel will open up. Kong gave reference to some of the affiliate churches of CHC that are creating impact in their nations.

The anniversary celebrations came to close when Kong led the congregation in praying for the leadership of the church—CHC 2.0. Key leaders, ministry heads and department heads went on stage to be prayed for and to be prepared for the task ahead.

The continuity of CHC was on the minds of all; as Kong put it, vision is not a destination, but an adventure.