The recent gospel concert by City Harvest Dialect Church proved an entertaining, encouraging and uplifting time for its elderly members. 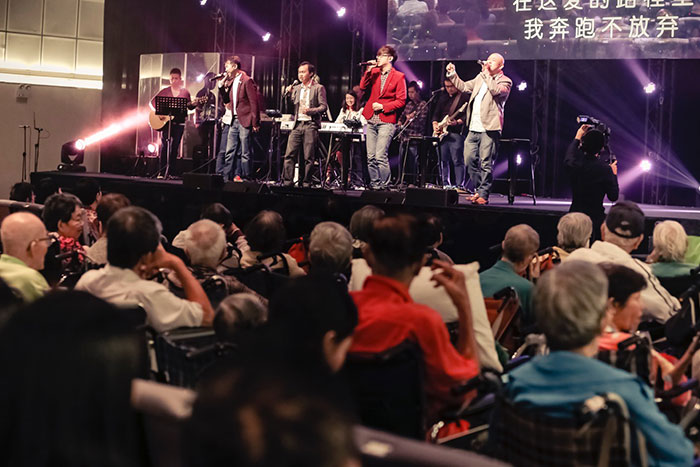 Smiling ushers stood at the door of City Harvest Church’s theater at Suntec Convention Centre on Level 6, welcoming elderly members of the congregation, who settled down and began chit-chatting with each other.

As the lights dimmed and the music played, the seniors clapped to the rhythm and lifted their hands in worship. Age was no limit when it came to expressing their adoration to God. After the opening praise and worship session, the concert kicked off. The opening act, a husband-and-wife duo, Erik Chua and Yvonne Tan, sang a touching duet titled ”God Hears”, an assuring reminder that God’s love brings freedom and comfort. A series of song items performed by Dialect Church volunteers followed.  The audience sat enthralled by renditions of gospel favourites like ”Jesus Is On The Same Path Together As You” and “Believe”. All attention was drawn to the stage as the singers belted out melodious songs that encouraged and blessed those in the auditorium.

Maria Tok, pastor of the Dialect Church, took to the stage to share a sermon after the last song. She greeted the congregation, many of whom she has a personal relationship with. Her sermon was aptly titled ”Welcome Home”. Preaching in Hokkien, Tok delivered a message on freedom, reading from the parable of the prodigal son in Luke 15:11-12. She imagined how the younger son might have felt that he had no freedom at home and that everything in his life had been arranged by his father, thus he wanted to leave home.

Referring to the first man Adam, Tok said that sometimes when a person sins, he sins knowingly; he knows that what he is doing is bad, yet he still does it. Other times, he knows what he should do, but doesn’t do it.

”Many people don’t have a purpose in their lives, and they may not even know why they come to church, but yet they still know that God loves them; they know the Father’s heart,” Tok said.

The younger son did not know the Father’s heart and thought his father was trying to control and take over his life, but he was mistaken.

The son gathered all his belongs, went on his way and eventually mixed with bad company. Tok said that the son revealed the selfish side of human nature—he only sought after his own happiness without sparing a thought for others.

She gave an example of how a person was tempted to smoke. Smoking is bad for one’s health, and a person addicted to smoking often says he has no choice. But if the person had true freedom, he would be able to rely on God’s strength to quit, she said.

In Luke 15:14-19 the son eventually spent all his money and did not have food to eat. He realized that even his father’s servants had more food than him but the prodigal son didn’t know how to return to his father.

At this point, Tok asked the congregation if they had peace in their hearts, and encouraged them to give their heart to Jesus. The son limped home, his heart heavy with guilt. Yet his father did not care that he was smelly and dirty, nor that he had made mistakes.

As long as the son returned home, all was well. This reflected the father’s heart towards the son.

”In Luke 15:22-24, the Father clothed his son in a new robe, new sandals and a big ring to tell the son that whatever the Father has, the son can have too,” Tok said. “If you have an apple and your son asks you for the apple at the same time that a stranger does, who would you give the apple to? Your son, because your son has the privilege.”

Tok ended the session with an altar call, which saw a number of audience members responding.