On April 6 this year, national broadsheet The Straits Times reported an alarming trend: the number of boys aged between 13 and 18 who have visited prostitutes is on the rise in Singapore. From a sample of 300 heterosexual teen boys who have gone to the Department of Sexually Transmitted Infections Control (DSC) Clinic for treatment between 2009 and 2014, it was found that two in five of them had engaged in intercourse with sex workers. A worrying trend for any parent of teenagers, but the implications may go even deeper for Christian parents.

The Explicit Youth Conference, held on May 27 and 28 May was a timely event in the face of these recent findings. Organized by para-church entity Scripture Union in partnership with local churches and organizations, the Conference attracted over 400 youth and youth pastors from over 40 churches of different denominations.

The venue for the conference was St Andrew’s Cathedral, normally a peaceful enclave just steps away from the hustle and bustle of City Hall, buzzed with excited chatter as many young people registered for the opening session on the Friday evening. The teenagers streamed into the cathedral’s new sanctuary and filled up the wooden pews clutching plastic packages containing a journal titled 40-Day Journey To Purity by Kris Vallotton and Jason Vallatton, a mirror, a marker and a conference booklet. The Explicit team members come from different churches and denominations across Hawaii, USA. The Explicit Movement began in 2012 out of the sheer obedience of Michele Okimura, a pastor’s wife who received a call to hold a high school camp focused on sexual purity, with just 20 teens in attendance. That led to another camp for junior high students in 2013. In 2014, Okimura was asked to conduct similar purity camps for other churches. Her purity camps attracted senior pastors from different churches and denominations across Hawaii, who collectively felt there needed to be an Honolulu-wide Explicit Conference. She reached out to numerous youth pastors and within a month, she had a team that was strong in various areas of sexuality and sex. The first conference was a powerful success, which quickly led to requests from global churches. Singapore was the first country outside of the USA to conduct an Explicit Conference. The first speaker of the evening was Brandon Ahu, a young adult pastor from Honolulu who quickly warmed up the audience with his dynamic preaching. Using a makeshift wardrobe with several “Keep Out!” signs pasted all over it, he explained that people tend to hide skeletons in their closets.

“What if people really see what’s inside?” he asked. At that, he pulled open the closet door and several large items tumbled onto the stage.

Having underscored the message that everyone has his own personal “junk”, Ahu revealed what God would do with the mess. His co-workers then went on stage, picked up the fallen objects and walked away. Ahu explained that in the same way, God is not afraid of the mess and would take it all away.

He then declared that it was time to stop the hypocrisy and to dethrone the tyranny of guilt and shame. He ended his session with a prayer. Mikela Branco’s powerful and visual sharing began with her telling her audience about her rough childhood. Her parents always fought—her mother was on drugs and her father was an alcoholic. She was later removed from her dysfunctional family by relatives and sent to a private boarding school at 14. Heavily influenced by pop culture and the movies, at 16, she had sex for the first time.

Using a marker, Branco turned to the full length mirror propped up on stage behind her, and began scrawling words like “slut”, “worthless” and other words that represented who she felt was at that point in time. These were words that she had labeled herself with back then. But when God came into her life, Branco experienced total cleansing. As she told the audience about God’s grace and mercy over her life, an Explicit team member began wiping away the harsh words Branco had written on the mirror. God revealed that those were all lies from Satan.

She then asked God, “Who am I?” The answer from God that she wrote on the mirror was: “Beloved”.

Scott Kobayashi, a youth pastor, followed up on Branco’s message by telling the youths to take out the mirror and marker from their own conference packs. They were instructed to ask the Holy Spirit to reveal what they had been believing about themselves and to write those words on the mirror. Youth leaders and pastors from different church formed a line in the front of the hall. The youths were invited up and each leader then took an alcohol wipe, cleaned the words off and prayed for each young person. The next day proved a rainy Saturday but the hall was packed with at least 100 more people than the previous night. Speaker Richie Cruz shared about “The Father’s Heart” and spoke candidly about how he overcame a debilitating pornography addiction that culminated in strip bars—an addiction that almost destroyed his marriage. Cruz also shared scientific facts about exposure to pornography, giving his audience a clear understanding of how an addiction is formed.

Kimberly Kieseker, 18, from Bukit Panjang Methodist Church said that the sharing “gave her a new perspective”. Her friend and fellow churchmate, Sarah Ann Wee, 18, agreed, adding that she was surprised to find that watching pornography alters one’s brain in the same way that taking hard drugs would.

Speaker John Allison opened his session by asking how many in the audience knew someone who was gay or lesbian—and a third of those in the room raised their hands. Allison spoke openly and honestly about his personal journey through same-sex attraction. He grew up in Oklahoma with a good family but was sexually abused as a child by some older children. As a teen, he had a sexual relationship with a boy for four years that no one knew about. But one day, the Holy Spirit spoke into his heart, asking him what he was doing with his life. After that encounter, he began to change his life. He also shared that it was the Holy Spirit who led him to share about his past and how he overcame his challenge.

Allison then addressed questions people frequently ask him, including, “Are people born gay or is it a choice?”, “What does the Bible say about it?” and “Can a gay person change?”

He quoted from the Bible and explained that even as Jesus changes people’s lives, believers need to have realistic expectations. He said that one may never lose the same gender attractions, but that Jesus would continue to walk with them on their journey.

Teng Jingxuan, 17, from St Andrew’s City Church said that the sharing was meaningful because it taught her how to relate to those who are friends who are gay or lesbian. After lunch, the youth were separated by gender. The girls’ workshop was helmed by Mikela Branco, with a testimony from Alisa Choor, 35, from Focus of the Family Singapore.

Branco then encouraged the girls to step onstage to share if God had touched them through the conference. Several girls shared how God had shown them love and how He had been faithful to them. Finally, the girls were paired up and led in a time of seeking God for a word for one another.

The conference also covered the topic of dating and relationships. Kobayashi and Branco, who are engaged to be married, talked about how they navigated their relationship as they dated. They shared about how they asked for help from their friends who asked them tough questions and kept them accountable. They also talked about how teenagers should take their time and not rush the process of dating. In addition, Branco mentioned how both girls and boys ought to guard their hearts. She also pointed out that some millennials had a habit of pouring out all their troubles on social media, something that could make them vulnerable. 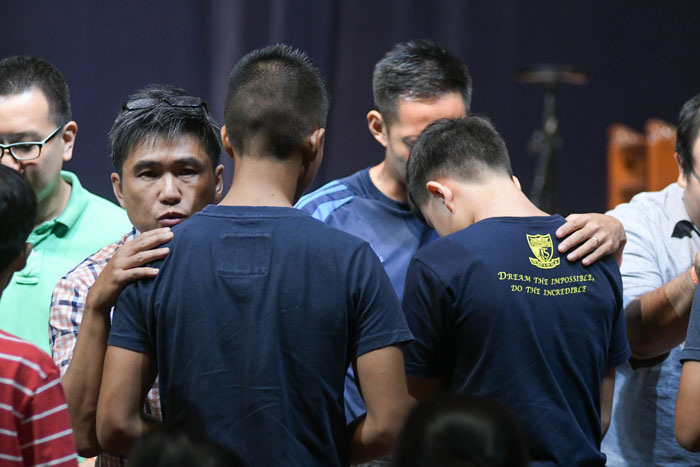 Separate from the youth conference, parents of teenagers attended a session by Dr Chloe Buckley, a clinical psychologist who explained how a relationship between parent and child can shape a child’s development into a sexually pure, mature adult one day.

Many lessons were learned, much information absorbed and hearts and spirits cleansed and strengthened. Youth pastors were encouraged to continue reinforcing the learning the youth had done during the conference by conducting the 40-Day Journey To Purity journal exercise with them.

For Timothy Tan, 22, a youth leader from St Andrew’s City Church, the chief thing he gleaned from the first Explicit Conference was, “I am struck by how God loves you despite the many wrong things you’ve done and that He still keeps coming after you.”

To find out more about the Explicit Movement, visit www.explicitmovement.org. For more information about Scripture Union Singapore and its works, visit www.su.org.sg

How To Manage Your Child’s Stress In School