This Sunday is Valentine’s Day and City News heads to the Bible in search of romance: who was the most romantic lover? Who gave the most bizarre gift in the Bible?  We bring you the Top 10 demonstrations of undying devotion from the Good Book.

When a man loves a woman, it’s only natural that he showers her with gifts. Apart from the ubiquitous Chanel or Prada bag/shoe/wallet, there are much more interesting things a man can present his significant other.

Bible heroes appear to be most creative when it came to gift giving. There were the romantic ones who wrote beautiful love letters and spent years winning the in-laws over. Then there were the old-school practical guys who gave extremely expensive (if unimaginative) gifts. And then there were those who had downright weird ways of wooing their woman.

We present our ranking of the top 10 Valentine’s Day gifts from the Bible: 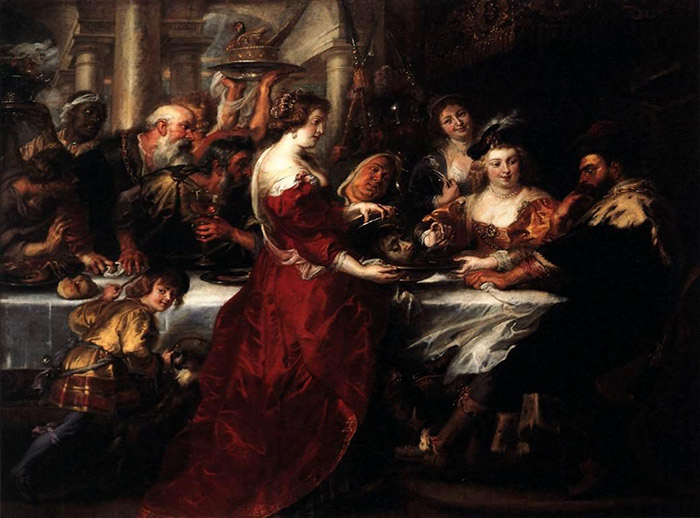 In Matthew 14, John the Baptist had cheesed off Herod and Herodias because he condemned their sinful union—Herodias was the wife of Herod’s brother. Herodias wanted the prophet dead. At Herod’s birthday celebration, Herodias’s daughter impressed him with her dance and the king, in drunken enthusiasm, promised her on oath anything she wanted. Salome readily replied, “Give me, served up on a platter, the head of John the Baptizer.” Herodias got what she wanted. While Herod’s actions could be construed as giving in to his woman’s whims, we do not suggest you do likewise, largely because it will land you in jail. Rebecca Receiving The Bracelet At The Well by English-American painter Benjamin West, 1775.

In Genesis 24, Abraham sent his most trusted servant Eliezer to find his firstborn a wife. So “the servant took ten of his master’s camels and, loaded with gifts from his master, traveled to Aram Naharaim and the city of Nahor” (Gen 24:10). When he found Rebekah and she passed the very test he had set, the servant presented her “a gold nose ring weighing a little over a quarter of an ounce and two arm bracelets weighing about four ounces.” Back at her house, he brought out gifts of silver and gold and clothing and gave them to Rebekah. He also gave expensive gifts to her brother and mother. So this isn’t the most romantic exchange, mainly because the courting was done for Isaac by his dad and manservant. But hey, if you like it better (get your servant to) put a nose ring on it, right? Eliezer chose well: Isaac and Rebekah did indeed get married and have two sons, Esau and Jacob.

Sarah had passed away and Abraham wanted to buy a piece of land for her final resting place. Genesis 23:12-16 says, “Abraham bowed respectfully before the assembled council and answered Ephron: “Please allow me—I want to pay the price of the land; take my money so that I can go ahead and bury my wife.” Then Ephron answered Abraham, “If you insist, master. What’s four hundred silver shekels between us? Now go ahead and bury your wife.” Abraham accepted Ephron’s offer and paid out the sum that Ephron had named before the town council of Hittites—four hundred silver shekels at the current exchange rate.” We think this is a pretty romantic gesture, especially since Abraham insisted on paying for it even when the landowner wanted to give it to him for free. But was Sarah actually buried there or not? We’re still confused. While it is true that there should be no secret between a man and his wife, the rules don’t apply to treacherous harlots you’re not married to. Samson learned this lesson the hard way. The Philistines had been trying to get rid of Samson the Judge, a corrupt but inhumanly strong man. Try as they might, they could not overcome him. When they found that Samson had fallen in love with Delilah, they bribed her to find out the secret behind his great strength. Three times Samson lied to Delilah and three times the Philistines failed to capture him. As it says in Judges 16:16-17 (MSG), “She kept at it day after day, nagging and tormenting him. Finally, he was fed up—he couldn’t take another minute of it. He spilled it. He told her, ‘A razor has never touched my head. I’ve been God’s Nazirite from conception. If I were shaved, my strength would leave me; I would be as helpless as any other mortal.'” As he slept on Delilah’s lap, the Philistines cut off his seven braids, dug out his eyes and imprisoned him. Eventually, Samson’s hair grew back and he destroyed the Philistines and himself along with them. The tale of Samson and Delilah has inspired movies and songs that use it to illustrate the ultimate betrayal. Joseph was bethrothed to Mary—that’s engagement leading to marriage—when she told him she was pregnant with Someone else’s baby. We would be hard-pressed to find another man in ancient or modern times who would stand for that sort of humiliation. But Joseph’s love for Mary and his faith in God caused him to believe when an angel appeared to him in a dream and told him that the child Mary was carrying was the Son of God. Joseph did an about-turn and married Mary (Matthew 1:18-25). Not only that but Joseph loved and cared for Jesus like he was his own son, from ensuring the safety of Mary and the unborn child when Herod decreed all babies under the age of 2 were to be killed, and hunting for a place in Bethlehem for Mary to rest and birth the baby, and later, the Bible also gives account of him and Mary returning all the way back to the temple in Jerusalem to retrieve the 12-year-old Jesus when he failed to join the family in returning home. While this may be low-key romance, it most certainly is true love. The first ever love story in the Bible was that of Adam and Eve. Of all the lions, monkeys and elephants Adam could have given to Eve, he decided instead to give her the most beautiful gift: a name: “Finally! Bone of my bone, flesh of my flesh! Name her Woman for she was made from Man.” (Gen 1:23) When they were chased out of the Garden, Adam once again displayed his name-giving skills. “The Man, known as Adam, named his wife Eve because she was the mother of all the living.” (Gen 2:14) The Song Of Solomon by Scottish painter Sir William Russell-Flint, 1909.

David was well known as the psalmist who wrote the most beautiful songs to God. His son, Solomon, was equally gifted in song-writing but the object of his affection was far more carnal. The entire book of the Song Of Solomon is a series of love letters between a king and one of his wives or concubines. Here’s a snippet from Solomon’s letter:

“You’re so beautiful, my darling,
so beautiful, and your dove eyes are veiled
By your hair as it flows and shimmers,
like a flock of goats in the distance
streaming down a hillside in the sunshine.
Your smile is generous and full—
expressive and strong and clean.
Your lips are jewel red,
your mouth elegant and inviting,
your veiled cheeks soft and radiant.
The smooth, lithe lines of your neck
command notice—all heads turn in awe and admiration!
Your breasts are like fawns,
twins of a gazelle, grazing among the first spring flowers.”

Racy? We think so. We think most women would totally fall for this sort of gesture.

In the Book of Acts, Aquila and Priscilla were tentmakers who served God in tandem. They were mentioned seven times in the Bible and each time they worked together, serving Paul and his ministry.A commentary in Biblegateway.com notes that, “as Priscilla is always paired with her husband, Aquila, it is difficult to separate her and place her on a pedestal of her own. Their two hearts beat as one. Harmoniously, they labored together in the service of the church. They walked as one for they had mutually agreed to put Christ first.” Theirs was the very picture of a perfect marriage in Jesus Christ: a man and a woman centered in Christ, achieving more together than individually. The role models for every Christian couple. What is more important to a foreigner in an unfamiliar place? Acceptance and protection. But Boaz gave the Moabite widow Ruth much more than that. We see in the Book of Ruth that, having followed her mother-in-law Naomi back to Jerusalem after both their husbands died in Moab, Ruth met the dashing Boaz, a distant relative of the family. He let her glean the leftover harvest in the safety of his field. He fought for her and Naomi’s rights to their land. He didn’t freak out when he found her offering herself to him at the foot of his bed (it was her mother-in-law’s idea, by the way). He was the true kinsman-redeemer who eventually married Ruth and gave a home and a family line that led to Jesus Christ. No wonder Ruth was so smitten. This story is way more romantic than any Nicholas Sparks novel, is what we think. The Meeting Of Jacob And Rachel by Scottish painter William Dyce, 1853.

If you think your in-laws ask for a lot, you need to read Jacob’s story. It was love at first sight: “The moment Jacob spotted Rachel, daughter of Laban his mother’s brother…Then he kissed Rachel and broke into tears.” (Gen 29:11-12) Rachel’s father, Jacob’s uncle the crook Laban, made Jacob work seven years for him in exchange for Rachel’s hand in marriage. When the seven years was up, instead of Rachel, Jacob was cheated into marrying Leah, Rachel’s half-blind sister. Jacob had to work another seven years for his father-in-law in order to marry Rachel. But the Bible says, “But it only seemed like a few days, he loved her so much.” (Gen 29:20) How much more romantic can a guy get?

CN Blog: Learning To Create For The One...