The Emerge Weekend services were an exciting, inspiring close to the month of youth camps and activities. The first of three Emerge services happened on Friday, Jul  3. “Every revolution starts with an idea and every revival begins with you,” declared Wayne Choong, a youth zone supervisor in City Harvest Church.

He was addressing the church’s youth members in the opening night of the Emerge weekend on Jun 3. Emerge is CHC’s youth movement that encompasses members aged 25 and under. Every year in June, during the mid-year school holidays, the youths in CHC gather for camps on a zone level. The Emerge celebration culminates in a weekend of services—usually the first weekend of July—in which the praise and worship team would comprise young people, and senior pastor Kong Hee would preach a number of messages for the youth.

Friday, Jul 3, marked the first night of the Emerge Weekend. The hall at CHC’s Jurong West church was filled with eager youths. In classic Emerge style, the evening kicked off with games. “Bible-In-A-Minute”, a game inspired by the television show “Minute To Win It”, required teams of young people to perform Bible-related tasks, such as piece random words together to form a Bible verse within 60 seconds. After three anxiety-inducing rounds, Team Heartbeat emerged the winner. A vibrant praise and worship session led by the church’s youth worship leaders brought down the glory of God.  The hall transformed momentarily into a dance floor as hundreds of youths jumped and danced to exuberant praise songs. The hunger and desire of the youths for the presence of God was evident as they lifted their hands and knelt down before God during worship.

The highlight of the night was the highly-anticipated “Lip Sync Battle”.  Three groups and a soloist were pitted against each other, lip-syncing to upbeat tunes. Every contestant was so good that all those watching were glued to the edge of their seats wanting to join in the song and dance.

A SEASON OF REVIVAL The winner of the preaching challenge which ran through the month of June, Christopher Thong, 20, took to the stage and preached a message on Revival. Employing the three syllables in “re-vi-val”, Thong listed three characteristics of a spiritual revival: “Repentance”, “a Vivid experience with God” and “being VALiant”. The youths were deeply impacted by Thong’s strong conviction and power-packed message.

The next segment, a question-and-answer session with Wu Yuzhuang, a district pastor in CHC, was one that stirred up a desire in the youths. Wu interviewed four cell group leaders about their experiences, challenges and joys of being a youth leader, and how they balanced their personal time and time spent with their members.

The sharing aimed to inspire those who felt hopeless about their future to believe that God would turn things around for them just like He did for the youth leaders. Kong Hee, the senior pastor of CHC, then took the stage to share a short word with the youths. Reading from Numbers 14:24, which says, “But My servant Caleb, because he has a different spirit in him and has followed Me fully, I will bring into the land where he went, and his descendants shall inherit it,” Kong preached on God’s promise to Caleb.

“Life may not always be what you expect it to be,” he told the young people. “But have a different spirit and follow God wholeheartedly.”

He encouraged the youths to make a difference in the lives of those around them. “All it takes to change the world is to win one lost person, one soul at a time,” he said.

To illustrate his point, Kong showed a video of a church member Eunice, who reached out to two of her friends, Valerie and Jer Blinn, who had lost their parents at a young age. That one action eventually became a revival. 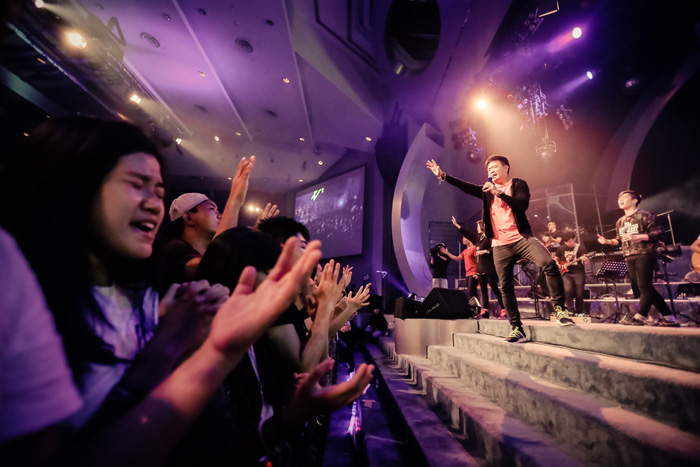 When they came to church, the members of the church showed the two sisters the love of God. Eventually, their entire family came to know Christ and begin attending CHC regularly. Valerie and Jer Blinn began reaching out to their friends and slowly, their cell group grew to 40 members. Today, Jer Blinn is a sub-zone supervisor, co-leading almost 200 youths with another sub-zone leader.

These inspiring testimonies showed the youths that through acts of love and kindness, they too can win the lost one soul at a time and revival will come. One person makes a difference; one can impact different people around them.

The night ended with the youths having the desire and conviction to do more for God and His Kingdom to bring great revival to their campuses.