Birthed out a cell group that consisted of church members’ parents, City Harvest Chinese Church has blessed many in the Chinese-speaking world. Pastor of the church, Tan Ye Peng, shares the journey. “It started as a cell group,” Tan recalls. “It was made up of the Chinese-speaking parents of our church members, about 30 parents.”

As the church grew, the cell group also grew, and the Chinese pastoral staff began to hold Chinese language services for these members on weekends, after the English service. “Firstly, it was [Chia] Chin Chin and subsequently her sister Ting Ting who did the preaching—Ting Ting was the first zone pastor,” he says.

“The Church Without Walls ministries were all led by women—[pastor] Lily Yong who started JAMs (Jesus for All Minds, a ministry to the intellectually-disabled), [Pastor] Eileen Toh who started Children’s Church. Also, Ting was needed at that time to assist Sun [Ho, co-founder of the church].”

“When Pastor [Kong] asked me if I wanted to head Chinese Church, I was apprehensive at first because I had never read a Chinese Bible, never preached in Chinese,” says Tan. “But he asked me to take up the challenge.”

Tan began by collecting the offering during the Chinese service while Chia continued to preach. Eventually, after a few months, Tan took over preaching duties. “I preached my first full sermon in Chinese—all the sermons were translated from Pastor Kong’s English messages that week. To help the members understand better, I would give them sermon outlines every week,” he recalls.

One joyful moment for Tan was the day his mother received Christ. “We came from a non-Christian family, so she was not open to the Gospel for many years,” he shares. “But in 1998, she got saved and became a member of the Chinese Church.” Today, “Chen Mama” as she is known, is a church staff member in the nursery department.

Since 1996, the Chinese Church grew steadily each week, but it was when CHC moved to Jurong West in 2001 that it exploded in growth.

“We were supposed to use the fourth floor Chinese Church room at Jurong West,” says Tan, referring to the teaching rooms in the building that could seat 300. “Our first service was packed! Immediately the following week, we started using the B4 auditorium instead.” This is the main auditorium of the Jurong West church that can seat several thousand. 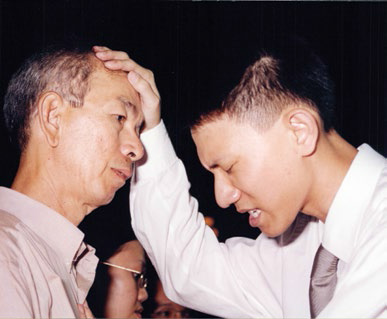 Tan in the early days of Chinese Church. PHOTOS: CHC

Since that time, the church has grown “to 1,000 members.” Chinese Church today enjoys its services next door to the English service, in its very own fully-fitted theater in Suntec Convention Centre’s Hall 606, which seats 800.

God brought Chinese Church to its next level in 2004, when the church began seeing students from China coming to CHC’s School of Theology. “Many of the graduates would attend the Chinese Church cell groups. When they went back to China, they would start pastoring their churches,” he describes. This has continued to today. Tan explains, “Today, a strong focus of Chinese Church is to help the mainland Chinese churches.”

Among the local Chinese Church members, 2004 was also a year of breakthrough as Tan encouraged many to attend SOT. “Because of their educational background, the Chinese-speaking members feel they are not qualified enough to take up leadership positions in the church,” he explains. “What brought a big breakthrough was when Chinese Church members went to SOT—even some who were of an advanced age had the will to go through the course. As a result, over the years, all our cell group leaders have gone through SOT.”

Today, nearly 59 percent of Chinese Church is made up of Singapore Chinese speakers, while 41 percent are Chinese-speaking nationals from other countries, primarily Malaysians, mainland Chinese and Taiwanese. Many of them live and work in Singapore on contract, hence the population of Chinese Church is constantly evolving: members go back to their home country and new people join the church. Currently, the congregation size stands at 1,029 and there are 37 cell groups in Chinese Church. While the Church started with a congregation of older members, there is now a broader range: the oldest cell group leader is 60 while the youngest is 29. While the older members are the Singaporeans, the younger ones are mostly Malaysian and mainland Chinese.

“The uniqueness of Chinese Church is that the median age is significantly older than the English service congregation,” notes Tan. “Also, they have simplicity in their hearts towards Jesus and enjoy the fellowship in church every week.”

A PERSONAL JOURNEY OF GROWTH Tan admits that when he started preaching at Chinese Church he did not have much confidence. While he was conversant in Mandarin, there was Bible jargon he had not mastered. “Between 1998 and 2000, I was struggling. I would tell the congregation every service, ‘I’m sorry I couldn’t preach better’,” he says.

“In 2000, I had a spiritual encounter with God,” he adds. “He said, ‘Stop apologizing for being a Chinese church pastor. I will anoint you and I will use you.’ From that moment on, things started to change. I felt the words coming more naturally as I preached in Mandarin every week.”

“When the Church had a need, I just stepped up. Little did I know that God was preparing us for the Crossover in Taiwan in 2001. Because I was the Chinese Church pastor, I naturally became the liaison with the Taiwanese pastors we worked with during the Crossover Project. Which is why I ended up helping Sun as her coordinator, because of the language issue. That’s the reason I was involved in the Crossover.”

It was at this crucial time that the other Chinese Church pastors began rising up to help look after the congregation. “Thankfully God brought staff who helped me to run Chinese Church, like Joseph Ang, Leong Yan Chee and Sun Aizhen,” says Tan. “I’m really grateful for them and all the leaders in Chinese Church.”

Over its 17 years, God has shown that He has great plans for Chinese Church. For Tan, the goals for this year are to continue development of his leaders so that they can continue to give good pastoral care to members, and to continue missions to China to strengthen the churches there by teaching Bible study courses, training them in music and worship, and helping them with governance and structure.

How has being the pastor of Chinese Church benefitted him? “I still feel there is a lot of need in the Chinese-speaking world, especially our SOT graduates in China who are pastoring churches, ,” he says. “I’m glad I can now minister in Chinese without an interpreter. It is a great opportunity for me to share the Word of God, which is what is most needed in these Chinese churches.”

City Harvest Trial: Why The Sentences Were Reduced...