Studying The Book Of Philippians

Over two weeks, in a study of the Book of Philippians, pastor Tan Ye Peng explored the topics obedience and joy in the midst of suffering for the furtherance of the Gospel. On the final week of May and first week of June, members of City Harvest Church traveled to the church’s Jurong West premises to attend a Bible study series on the Book of Philippians taught by CHC pastor Tan Ye Peng.

Tan opened the first session by providing a historical context of the epistle. Most Bible scholars believe that the Book of Philippians was written during the Apostle Paul’s imprisonment in Rome around AD 62. Paul had established the church in Philippi 10 years prior, during his second missionary journey recorded in Acts 16. Written to thank the church for their gifts and support while he was in chains, Paul’s deep affection for the believers in Philippi was evident. Tan encouraged the congregation to understand the Book of Philippians from the context of the epistle to find out what was Paul trying to tell believers even to this day.

Fellowship In The Work Of The Gospel

The epistle begins with Paul thanking the Philippians for their fellowship in the work of the gospel.  The repetition of “you all” emphasizes the point that the fellowship in the work of the Gospel refers to a partnership, and that the church is not built on individuals. Tan urged the congregation to reflect on their relationships with their cell group members and to stay faithful to the “good work among you”—the work of the Gospel, salvation of souls and becoming more Christlike.

Paul beseeched the Philippian church to understand the mind of Christ and not to be discouraged in preaching the Gospel in light of the plight he was in. With tender affection, Paul expressed his longing for the Philippian church in Philippians 1:8. True affection in Jesus comes about when believers serve together for the purposes of God and the furtherance of the gospel. At this point, Tan encouraged the congregation not to be so busy with their individual lives to the point where they have no time to build relationships with affection and love.

Tan went on to expound on Philippians 1:9: that love may abound at the same time as knowledge and discernment increases. Tan explained that knowledge is the accumulation of facts whilst discernment is the correct use of the facts. Therefore, it is not enough simply to have knowledge. Believers must have spiritual discernment to “approve” things which are superior and of greater value (“excellent”), in order to be unmixed and pure (“sincere”). Furtherance Of The Gospel

Paul’s imprisonment had allowed him to preach the Gospel to the soldiers who guarded him in the palace as well as everyone in the palace (1:13). To Paul, the furtherance of the Gospel was far more important than his own affliction, justification or vindication. Paul was able to rejoice in his state because Christ was being preached, and this would turn out for his deliverance. As Paul said, to live is Christ for the furtherance of the Gospel, to die is the resurrection of the dead.

Conduct Worthy Of The Gospel

Paul exhorted the Philippian church to carry themselves in a conduct worthy of the Gospel as citizens of heaven. This meant that they were to have the same mind and love of Christ, being united in spirit, and intent on one purpose (2:2). Christ best exemplifies this—having made Himself of no reputation, took the form of a bondservant, as a man, he humbled Himself and became obedient to the point of death. Paul directed the Philippians to model after the conduct and obedience of Christ, to do all things “without complaining and disputing” (2:14). Likewise, the church is to be fashioned after the person of Jesus Christ, to be a holy and living sacrifice before Him. Tan commenced the second part of the series with a brief recapitulation of the previous week’s key points. He then went on to talk about Paul’s desire to send Timothy to the Philippians because Paul was anxious about the state of the church (Phil 2:19). Timothy was of proven character who, like Paul, sincerely cared for the Philippian church. Lifting up and peering through a glass of water, Tan said that to be sincere means to be of pure motives, to be able stand up to the sun to reveal that there are no impurities contained within.

Rejoice In The Lord

In Philippians 4:4, Paul focused the attention back to Jesus—the source and reason for true joy. To Paul, the truly “circumcised” were the Jews and Gentiles alike who worshipped God in the Spirit (as opposed to emphasizing the flesh), who take their pride in Jesus (as opposed to taking pride in family descent), having no confidence whatsoever in the flesh.

Paul had a startling re-evaluation of values in Philippians 3:7. What Paul thought would be profitable for him had all turned out to be losses. To Paul, the knowledge of Christ Jesus the King was of supreme value. To illustrate this point, Tan got 12 volunteers on stage, each holding on to a placard bearing a word that represents society’s values, such as, Marriage, Educational Qualification, Religious Upbringing, Family Inheritance, Social Status, Career Resume, Offenses and Hurts. Tan then divided them into two lines: Debit and Credit. To Paul, all these things which he once held as valuable, he now considered to be “debit” or “rubbish.” To Paul, Jesus was the only “credit.” Tan remarked that people would not be so easily offended and discouraged if they had this rethinking of values in their lives. 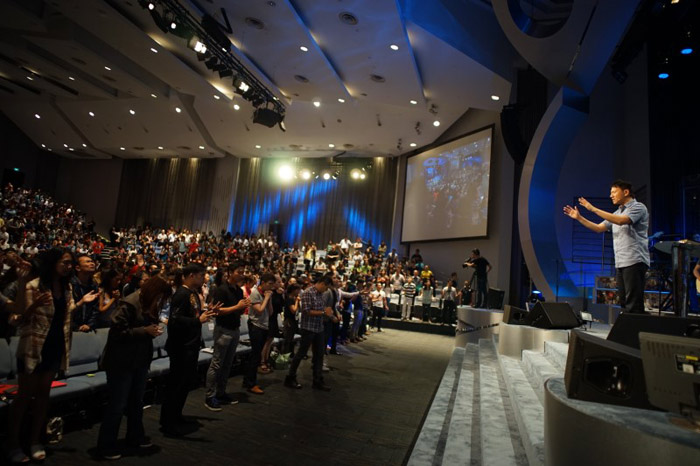 The Power Of His Resurrection

Paul described the resurrection of the dead as perfection in Philippians 3:10-12. Christians should carry the Cross in two ways—physically bearing the cross in the face of persecution, and the inward denying of self. Using an analogy of a running race, Paul depicted a race where the winner received a prize. One day, Jesus will call His followers to the podium to receive their prize—eternal life and a resurrected body. Because of the resurrection power of Christ, a believer is richer than the richest man without Christ.

Recounting the Parable of the Pearl of Great Price, Tan reiterated the surpassing worth of knowing Christ Jesus. Just as Christ emptied himself, so the Jews, like Paul, who had thought themselves privileged, should likewise empty themselves so that they may gain an even more valuable prize (resurrection life). To Paul, if the glorious, resurrected body and eternal life found in Christ was of supreme value, then circumcision of the earthly, lower body should not be considered gain or profit. Spiritual Stability In The Lord

In the last chapter of Philippians, Paul implored Euodia and Syntyche to settle their disagreement, Likewise, Tan said,  issues in church should be ironed out promptly to avoid solidification of resentment. Our gentleness or graciousness, which involves the willingness to yield one’s personal right to show consideration to others, is to be made known to all men (4:5).

In Philippians 4:11-13, Paul’s contentment was independent of circumstances because he was content with Christ. Paul knew how to abase and how to abound because he had learned that the secret of contentment lies in Christ-sufficiency, not self-sufficiency. Tan highlighted that contentment needs to be learned; it does not come naturally just because one is a believer. In closing, Tan shared the four keys to spiritual stability in the Lord:

2. To be strengthened in the Lord;

3. To rejoice in the Lord; and

Jazreel Chuan, 21, a student, was blessed by the study of God’s Word. “What truly matters is Christ alone. I have learned to put Christ as my one and only, to be concerned about the gospel and the church, just like how Paul was.”