Christmas At CHC: The Power Of Forgiveness 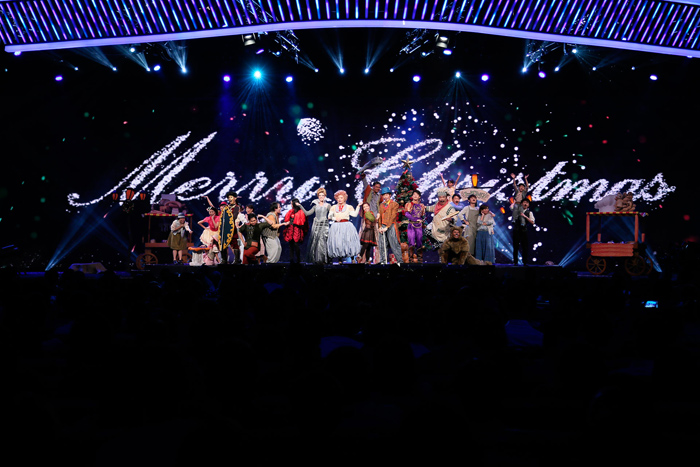 This year’s Christmas service at City Harvest church was held over the weekend of Dec 21 and 22, and saw an overflowing auditorium in each of the four services.

The lights were warm, bright, and in the cold, cold, air-conditioning, one could almost imagine he was in a wintery wonderland. Many members were decked out for the occasion as well–some came in Christmassy scarves, others in Santa hats.

The real thing that brought out the Christmas spirit, however, was the love in the air. People wandered about the hall greeting each other, many of them making new friends and catching up with old friends.

The same warmth filled the stage as the drama production, Christmas At Pooperwick, began. The opening number dazzled, with the cast singing and dancing to the wonders of Christmas. The merry tune was an original song written by Caroline Tjen.

The imaginative animated “sets” of Pooperwick were created using the hall’s giant LED screens, together with prop doors and an array of Christmassy items.

Pooperwick was deep in preparation for its 100th anniversary, which coincided with the Christmas celebrations. The decorations, the food, the drinks, the presents were all ready when Pooperwickers went to bed on Christmas eve. But in the middle of the night, the Baddies, Pooperwick’s archenemies, snuck into town and wreaked havoc: they destroyed the snowmen, stole the Christmas tree and graffiti’d the houses of the Pooperwickers.

The mayor’s wife woke up to discover the horror and her wails rouse the rest of the village to the tragedy. Encouraged by the mayor’s daughter Piper, the villagers banded together to form a little team to “steal” Christmas back from the Baddies. Meanwhile, in the palace of the Snow Queen, the Baddies showed off their spoils to the Queen. Made up of Prince Charming, the giant from Jack in the Beanstalk, the Evil Queen’s mirror in Snow White, Little Red Riding Hood and the Wolf, the Baddies regaled the wicked Queen with their exploits and overall badness.

As the villagers traveled through the dark forests to get to the Baddies, they were ambushed and carried off to face the Queen.

Just as they were about to be eaten up by the Wolf, the quick-witted Piper convinced the Baddies to let the villagers share with them the nativity story: they mimed the tale Mary, Joseph, King Herod, the Shepherds and the wise men as Piper narrated the story of the Christ’s holy birth. The story melted the hearts of the villains who began to regret the evils they had committed. But before the Pooperwickers could get away, the Queen returned in a mighty showdown: she was, in fact, the sister of the mayor’s wife, Megan. The village had shunned Melissa, the Snow Queen, for her magic and her sister Megan never stood up for her. Chased out of Pooperwick, Melissa took on the pseudonym of “Snow Queen” and made it her mission to destroy Christmas for her former home.

Megan asks for forgiveness from her sister, and the two reunite and returned to Pooperwick. The reunion of the two sisters reminded the congregation that when it came family, no wrongdoing or mistake could be too grave for forgiveness.

A fitting message for the season, as forgiveness is key and love is the message Christians celebrate at Christmas.

LOVE IS THE ANSWER

Kong Hee, senior pastor of CHC, brought the church through the Magnificat in Luke 1:46-50, where Mary rejoiced at the knowledge that she was to be the mother of Jesus.

The Magnificat declares God is mindful, mighty and merciful. Illustrating with three testimonies from members of CHC, Kong shared how God had acted in their lives. One, an ex-convict who had once been in gangs, had turned away from his past and looked towards his future when a visiting pastor had shared the word of God with him. Another, a young woman who came from an abusive family, wanted to commit suicide but decided to look towards God after her cousin shared the love of God with her. The final testimony was of a man who was prayed over by his cousins after a horrific car accident, and was miraculously healed after multiple bone fractures, skull and brain injuries.

But what each had in common was that the love of God was shared with them and they each began to find forgiveness within themselves, through the love of God. The senior pastor’s message of how God was mindful, mighty and merciful, reminds the members of the greatest act of love, the love celebrated during Christmas: God sent his Son down to earth to die for the sins of men, so that they may be forgiven.

The testimonies touched the hearts of many in the congregation, showing them that the route to love and forgiveness was simple. All it took was a prayer, the knowledge that judgment was swept off the table, and an acceptance of love.

Over the four services, 8,391 people gave their hearts to God during the Christmas services. CHC welcomed them to God’s family, where forgiveness is constant and love is overflowing, where hearts are open to all.