On the weekend of Nov. 16 and 17, after weeks of preparation and prayer, thousands of City Harvest Church members pledged amounts towards the building of God’s house.

A moving testimony at the start of service set the tone. Koh Soon Tiong and his wife Alison Lim have been members of CHC for 24 years. When they first got married, they were living on a combined income of S$2,400, and had to service a significant debt. With much pain and prudence, they couple paid their way out of debt eventually. Koh reiterated that despite financial hardships, they felt that giving to God was something they could not miss out on. They continued to fulfill their tithes and participate in every Arise & Build campaign. They found that God consistently provided for their family, and Koh experienced great favor throughout his career with multiple increments in his salary. Despite having a young family and holding down jobs, both Koh and Lim managed to study for their degrees and are both now graduates. Koh has also recently received full sponsorship from his company for his Master degree in Business Administration. 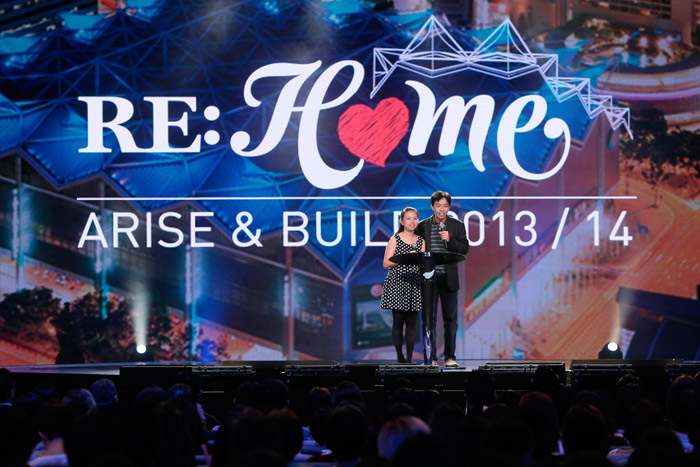 The couple told the church about a difficult period in their lives when Lim was diagnosed with Stage 3B breast cancer while pregnant with their third child. The church was in the midst of an Arise & Build campaign and they were tempted to excuse themselves from fulfilling their commitment due to the ensuing financial burdens and stress. However, they felt that during this time when money was most precious to them, that was when they should put their faith in God to work a miracle for them. So they made good on their pledge unto the Lord. Subsequently, Lim’s insurance covered 90 percent of the medical fees and they also received a S$70,000 payout from the insurer. Lim responded well to the chemotherapy and  the tumor shrunk from six centimeters to 0.8 millimeters. Her cancer has since gone into remission and she has remained cancer free for five years now.

The couple summed up their powerful testimony with this: “We are not just building a building, but we are building a spiritual legacy that is for our children, and our children’s children, so that people like us who come to church with nothing, can encounter God, and live a life blessed with everything!”

Senior pastor Kong Hee began his message to the church by revealing how:

Drawing an example from the New Testament, Kong showed how Jesus’ ministry began with 12 persons, whom God used to raise up a people (body of believers), and eventually a place (church) was formed. WHAT ARE WE SEEKING TO “ARISE & BUILD”?

Kong went on to expound on seven characteristics of the kind of place believers should strive to build for God.

“The state of the sanctuary is a reflection of the God you worship,” explained Kong. In 1 Chronicles 22:5, King David declared how the house of God must be  “exceedingly magnificent, famous and glorious throughout all countries.”  “For CHC, Suntec is our best place for God’s glory at our current level of faith and history,” said Kong, noting Suntec Singapore’s central location, state of the art facilities, infrastructure and repute.

“God manifests His glory and power in His House,” said Kong. The church is the gate of heaven, a place where believers come together to worship and build spiritual altars to God.

In the Old Testament, a great revival broke out after the completion of Solomon’s temple. “When we complete the building fund in 7 to 8 years’ time, we would have built a strong, sustainable church for the next generation,” shared Kong. It would be a great launching pad for the revival of the Holy Spirit.

The church is the place where God restores broken dreams, and new visions are caught.

In Matthew 4:10, scripture reveals how the house of God is a place of worship. However, after worship, a believer should begin to serve God. “We are not saved by works, but we are saved for works,” revealed Kong. The church is a training place for every believer to positively influence his or her individual “marketplace.”

King David put God’s house as a greater priority over his own house. David recognized that he was simply a steward of what God had blessed with him, and he had to be a wise steward of God’s blessing.

“In itself, coming to Suntec is a testimony of God’s faithfulness to CHC,” said Kong, stating Suntec is a perpetual reminder of God’s power, and of what He can do for an ordinary people who put their trust in Him.

WHY ARE VOWS POWERFUL?

The foundation for all relationships is commitment. God expresses His deep commitment to us by making numerous vows (or promises) to us. In the December 4, 1956 issue of Time magazine, an article reports that there are 7,487 promises made by God to man! Similarly, man expresses his deep commitment to God through the making of vows.

Contrary to mainstream thinking, vows are not meant to keep us in bondage. Rather, it is a free expression of love. In marriage, couples’ vows to each other form the basis of their relationship. Whenever they hit a rough spot, they can go back to the vows they have made to each other, and commit to fulfill them in spite of how they feel.

Similarly, the vows we make to God are powerful. Kong shared how he and Sun would often revisit the vows they have made to the Lord, especially whenever the going gets rough. Through the reminder, they are able to draw strength and renew their vision and faith.

In the natural, contracts and agreements are signed to safeguard relationships. They are designed to prevent future disputes, providing safety and security. As the message drew to a close, members took out their pledge cards and made their vows to God. The atmosphere was filled with faith, love and joy as thousands of members streamed to the front to submit their pledge cards during the Saturday night service.  It was a sight to behold, as members from all walks of life, young and old, all rose up to take action on their love for God and His house. Truly, history is being made as the people of God unite together with a common vision and purpose: to arise and build!