The Day I Raced The Dead

The inaugural Race The Dead at Sentosa was a satisfying, heart-stopping zombie fest. I like to run and I like races, but I’m not a big fan of zombies. However, when the opportunity came up to take part in the inaugural Race The Dead, Singapore’s first zombie run, it was hard to say no.

The race was originally on Saturday, Oct. 26, but slots (both for the runners and the zombies) were snapped up before you could say “Thriller!” The organizers gamely opened up a second race on Sunday the 27th.

Participants clamored for spots as runners and as zombies. Even Paralympian Theresa Goh sent in a special request to be a zombie!

My cell group member Katherine Sng, the founder of the website Bubbamama.com, scored three slots to run in the Sunday race, and roped me in with another member of our cell group, Roslind Yip.

I had my list of trepidations—despite being familiar with races in Singapore, this was unknown terrain, and there would be obstacles. The toughest race I ran this year was the New Balance Real Run where we had to cover stretches of sand. I could not feel my backside for a week. Would I survive the running through sand and stomping through salt water?

Most importantly, would I survive the zombies? 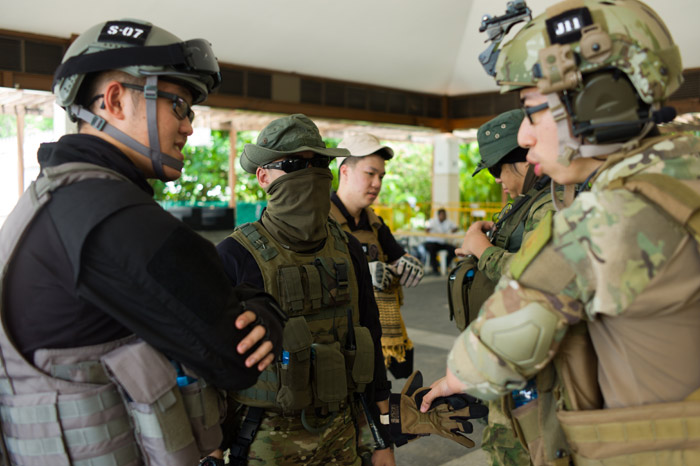 Participants gathered in a holding pen, where a macho “soldier” briefed us on the terrors we would be encountering. We were instructed to wear our two “life tags” around our waist and not to roll the up or hide them under our T-shirts. We had to be fair to the zombies.

“Don’t die! Have fun!” was his ominous instruction as we entered the zone.

The first 500 metres served up two single zombies who managed to surprise some and snatch a life tag or two. But it was going into the first killzone (zombie zone) that had my heart pumping. About 10 zombies eyed us hungrily from across the sand.

Some of these zombies were dead serious. Great outfits (some were in scrubs, some in school uniforms) plus fantastic makeup made them look really creepy, especially the ones who remained in character with dead eyes and twitchy arms. Our wave of about 25 runners mostly made it through without losing both life tags. I thought I had cleared the zone when a female zombie zoomed up to me from behind and yanked off my left life tag! I shrieked, “Alamak, mati!” but received very little sympathy.

Ros, who still had both life tags, declared, panting, “This is so bad for my ankle.” She still could sprint so I didn’t believe her at all.

We had to cross a series of obstacles, from a wooden maze sprayed with scary messages to a salt-water zone where a tired volunteer tried to splash us with water using a pail. (Note to organizers: next year, use Nerf waterguns.) By the second killzone I had lost both my lives, while Kat still had one and Ros still had both! What I didn’t expect was how relaxing it would be to be one of the “running dead” since the zombies now had no reason to come after me. So I took my time to take lots of photos and laugh at fellow runners.

I came up behind a Filipino runner who suddenly screamed like a girl. He’d thought I was a zombie! I laughed so hard I couldn’t breathe. The zombies sure had that effect on humans.

The fun part of this race was that you never really knew when the next killzone was coming up. It would appear before your eyes and your heart would sink and the group of you would groan unanimously.

After crawling on my knees and elbows through sand, blithely skipping through the killzone with no life tags, and climbing over five rows of barriers (“parkour over!” instructed the obstacle master. Right.) we finally crawled to a hydration point.

“How far more?” moaned Kat, who had been de-lifed like me by now.

“You guys have to protect me!” demanded Ros, who still had one life tag left.

A young man came up to us and said, “Hey, go over there and get some more lives.”

Our ears pricked up. Like an iPad game, lives were replenishable! We walked around some trees and, there, like a mirage, was a life station!

The young man and his two friends spied us three with our topped up lives. “Let’s gang together,” suggested the leader, Shah. “Maybe we can bargain with them so we all make it to the finish line.”

It was a great ploy. Not 100 metres down the route, we came to our next killzone. Shah stepped up and said to the zombies, “We give you one life, you let all of us go through lah, can or not?”

“Are you guys the last wave?” asked one exhausted zombie.

“Nearly. One last lot after us. You can take their lives,” quipped our young friend.

Amazingly, the zombies accepted our deal. Shah sacrificed one life and the gang of us made it across the zone! Can We Make It To The Safe Zone?

We bargained our way through a couple more killzones—I gave up one of my lives—and took photos with the friendly zombies.

We came to our final obstacle: we had to pull ourselves up a slide using a rope, and then slide into a pool of mud-water, after which we would encounter the final wave of zombies.

I was down to one life tag. I wasn’t sure if I was going to make it. There were only six of us. And there were about 12 zombies. A soldier came up to us and said, “This is your final challenge. Make it to the safe zone with one life tag and collect your Survivor T-shirt!”

Too tired to think by now, we gamely dashed through the zombie mass. Amazingly, all of us made it through! We had to crawl under a net (eating sand) to get to the safe zone, and there, like two angels, stood the finish line crew.

“Congratulations! You survived!” they cooed, handing us each a survivor card, which entitled us to a Survivor T-shirt.

Scared, wet, sweaty, sandy and very, very smelly, we entered the race village, triumphant, knowing that we were going to wake up with some serious body aches on Monday. Race The Dead had one of the most fabulous race villages I’d ever encountered. There was live music for most of the afternoon, featuring local bands, and a drinks station serving up blueberry juice with lychee eyeballs. There was also a “shower station” set up by Singtel mio—a main sponsor—which aimed to break the record of “most people showering simultaneously”.

Race The Dead had some great sponsors, including 100 Plus, Dino Media, Frank by OCBC and even Plants Vs Zombies the app. I couldn’t resist taking a photo with a very fetching zombie.

If my underpants had not been wet, I might have convinced Kat and Ros to stay for the Walking Dead screening happening that evening. Singtel mio gave out picnic baskets with drinks, potato chips and mats to encourage partygoers to stick around and watch the show. It would have been fun. All in, it was a well-thought-out and executed race. Much attention was given to details, and I have to say the zombies and the volunteers were an amazing bunch!

I asked organizer Brandon Lee if he had expected this virgin race to be such a huge event. “No, I didn’t! But I’m glad we pulled it off!”

He was happy with the way the event went. “I think it was a success, since many people had fun and got to know each other better. However, I believe there is room for improvement,” he added modestly.

Among the changes he is already considering are tweaks to the concert program, and greater safety measures for runners and zombies. “I guess both runners and zombies were very enthusiastic,” he said, confirming that there were some minor accidents that inevitably took place.

Race The Dead’s charity element was to raise funds for Soule, a social enterprise that gives away a pair of shoes to a needy child for every pair of slipper sold. The race was also successful in this aspect: “As of now, we have raised S$12,000 for Soule,” said Lee.

The team is already planning for next year’s Race The Dead. Lee has some final words for his zombies: “Thank you for the hard work, you guys were awesome despite having to face the heat and thousands of runners!”

Check out our photo gallery of Race The Dead 2013.

For 2014’s Race The Dead, look out for updates at www.racethedead.sg

Flip Flops For A Good Cause

The Steps Of A Righteous Soule

How To Be The Difference

Soule: Teaching The World To Do Good