A friend of City Harvest Church, Landmark Church in Little India, Singapore, sees growth and breakthroughs through the power of prayer. 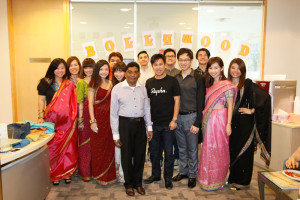 “A praying church is a growing church,” says Rev. Dr. Babu Dayanand, senior pastor of Landmark Church in Little India. To him, prayer has always been the key to revival and effective ministry.

Dayanand was born in India in 1969 to a Hindu father and a Christian mother. In 1978, at age 9, Dayanand fell from a platform onto the train tracks in Madras. He escaped death but lost his right hand in the incident. At the government hospital where he was treated, an elderly woman gave him a Christian tract and told him that when he grew up, he must serve the Lord. He did not understand then what she meant, but kept it in his heart.

During his recuperation in the hospital, three physiotherapists, all Christians, taught him how to write with his left hand. Through their love, he felt the hand of God on him.

Later in life, unbeknownst to him, his mother enrolled him into a Bible college, “I was really unhappy about it but somehow, as I finished my first year at the college, God opened a way for me to do my secular studies also,” he recalls.

Obeying the call of God to serve the local Indian community after he completed studying for his theological degree in Singapore, he quit his job at another local church to start Landmark Church. Within three months, the church grew from five members to 80. That number has since doubled, comprising a congregation of fervent intercessors who contend for and see answers to their prayers on a regular basis.

Prayers for healing and deliverance bring about breakthroughs, such as the case of a church member whose four-year-old child was diagnosed with leukemia. As the church kept the family in prayer, the prognosis came back that the boy would live. In another instance, Dayanand believed his intercession for a teenage delinquent resulted in an 18-month probation instead of imprisonment.

The church’s premises at Cuff Road are open every day for walk-in visitors. Additionally, anyone in need of divine intervention can call its toll-free number using a public phone. The call is forwarded to elders of the church for immediate prayers. The prayer request will also be sent to the church’s team of prayer warriors for further intercession. Beyond the four walls, Landmark’s outreaches extend to prison and hospital visitations in Malaysia, India and Indonesia. The banner outside Landmark Church put up in support of Kong Hee and the other CHC leaders.

With such a strong focus on prayer, it is not surprising to find that prayer is Dayanand’s response to the trial faced by City Harvest Church too. “We support CHC wholeheartedly, without an agenda. I have a burden for the independent churches in Singapore; we’re a part of the whole body of Christ. So when City Harvest suffers, Landmark suffers,” he says. Landmark Church has even erected a large banner outside its gates that declares the congregation is praying for CHC and its leaders.

As a tangible sign of support and love, the pastor also collaborated with his church members to provide a sumptuous lunch spread for the staff of City Harvest Church in early August, blessing the CHC church workers with nourishment and fellowship.

“I was deeply touched by their demonstration of love through their unceasing prayers and cooking lunch for our staff, just to say that they stand by us,” says Rev. Bobby Chaw, CHC’s Missions pastor. “Landmark Church believing the best for CHC encouraged me very much.”

“We know that God’s hand is upon City Harvest Church, its leaders and members,” says Dayanand. “Personally and corporately at Landmark, until the end, we will stand with City Harvest with our prayers and our support.

“We’re one body, because we serve one Lord.”