After 40 Weeks Of Prayer, What Next?

In the final session of City Harvest Church’s 40-Week All Night Prayer Meeting, Tan Ye Peng led the church members in envisioning the next level in their growth as a church. 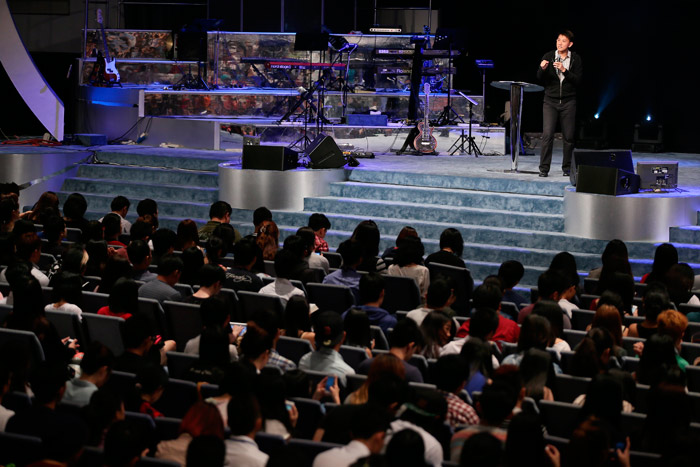 “Win the lost. After these 40 weeks of prayer meetings, we need to gain back the passion to win the lost and to serve in the cell groups once again,” exhorted Tan Ye Peng, deputy pastor of City Harvest Church.

He spoke on June 7 at the final session of the Friday all-night prayer meetings which had been going on for 40 weeks. Despite heavy rain, CHC members packed the hall at its Jurong West premises to seek the presence of God.

Preaching out of the book of Joshua, Tan used the story of the children of Israel to inspire the members to rise up and possess the Promised Land that God has given to the church.

After Moses died, Joshua led the children of Israel and they entered Promised Land. But the land had been theirs generations before they actually entered it.

“God had already given the land to Abraham, the fore-fathers of the Israelites,” Tan explained to the congregation.

There are three stages to the promises of God: giving, receiving and possessing.

“God has given (the promise), have we received and possessed?” Tan asked.

The children of Israel entered the Promised Land after defeating kings and possessing their land, but God said to Joshua in Joshua 13:1 that “there remains very much land yet to be possessed.”

“City Harvest, the pioneers have possessed some land, but there is more land to be possessed,” Tan told the members.

Tan went on to teach that the land was divided to the tribes by the casting of lots. In Joshua 18:3, however, Joshua asked the children of Israel, “How long will you neglect to go and possess the land which the Lord God of your fathers has given you?”

But just because the land had been given to each tribe, didn’t mean they automatically possessed it. They needed to physically go and take over the land. Relating this back to the church, Tan asked, “Where do we go from here if we consider the beginning of CHC till now? How long will we neglect to possess even more land?”

God singled out one person to show the kind of tribe Judah was to be able to possess so much land.

Joshua 14:6-15 says that Caleb inherited Hebron, a land filled with the greatest giants.

There is another group of people, the children of Joseph, the tribes of Ephraim and Manasseh. They were the people who can spot problems. “In another words, they are the people who complain,” smiled Tan as the audience laughed.

In Joshua 17:16-18, the two tribes were saying to Joshua that the land given to them were too small. But Joshua thought otherwise, and told them: “You are a great people and have great power; you shall not have only one lot, but the mountain country shall be yours. Although it is wooded, you shall cut it down, and its farthest extent shall be yours; for you shall drive out the Canaanites, though they have iron chariots and are strong.”

“City Harvest is a great people, we are strong. ‘Strong’ is the opposite of ‘slack’. We need to go and conquer more territories for the Lord.”

Referring to the court case that he is involved in, Tan said that it is very easy to use the trials of life as an excuse not to serve God. “But the court trial, the problems we face are all temporary,” he pointed out. “The ministry is eternal; changing lives and blessing others is eternal.” When a tribe conquers the land, each family will be given a piece of land. This piece of land will belong to them and their descendants for generations to come. When they are poor, they can sell the land for money, but every 50 years, in the Year of Jubilee, they will get their land back. That is why the inheritance, the piece of land, is so important to the children of Israel.

“When we get one family saved, they will belong to God forever,” Tan said.

“Many people have asked me, what do we do now after the 40 weeks of prayer meetings are over? I say to them, it’s time to win the lost. Why are we excited to go back to Suntec City? Because we can win the lost again!”

In Psalm 16:5, David said that the lot fallen to him is good. When the lands are being divided, it is really God who decides which land goes to which family. Similarly, God decides the ministry that his people serve in.

Tan remembered that in his youth, he did not know what his “lot” was so he served in whichever ministry he was needed in. In the course of serving, he found his love for teaching the Word of God, and that became his “lot”.

“The trial that we are going through cannot suck up all our energy,” he encouraged the members. “It is only the sideshow; the Church is the blockbuster.

“Winning the lost, going into the marketplace, preaching the Word of God must continue.”

The 40 weeks of prayer meetings ended with a time of ministry. Tan and his fellow pastors prayed for cell group leaders, and for those who were sick.