Bookmark: The Light Between Oceans

A couple’s personal tragedy leads them on a road of love, separation and redemption when a boat with a crying baby washes ashore. 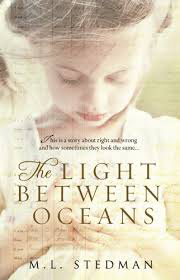 M L Stedman, an Australian-born first-time author. She is now based in London where she previously worked as a lawyer.

Western Australia. The spectre of World War I still hangs heavy, and serves as a strong backdrop to the general mood and feelings of the time. War wounds are still raw, as the townspeople try to overcome the hurt and hardship that has been inflicted on a nation.

Tom, a young decorated war hero, takes up employment as a lighthouse keeper. Emotionally battle-scarred, the isolated location of Janus Rock between the Indian and Southern oceans brings solace and tranquility to his life, but not for long.

A young lady enters his life, bringing much joy but also heartbreak. Their lives are sent spinning into unchartered territory when a small boat washes up ashore, with a dead man and crying baby on-board. They make a harrowing decision, with consequences that stretch far beyond their island shores.

M L Stedman writes with a disciplined hand, keeping the storyline on a tight leash. For all the vivid descriptions of the island setting and its towering lighthouse, the emotional force of the plot and characterization never leaves centrestage.

Deft empathetic touches feature throughout the book as Stedman has the uncanny ability to make the reader feel as the character feels. This raw emotion is captured brilliantly when Isabel is seduced by the notion that the baby’s cry heard from the washed-up boat was in fact the cry from her stillborn child.

“When a baby’s cry came to her on the wind, she looked instinctively to the new grave. Before logic could interfere, there was a moment when her mind told her it had all been a mistake—this last child had not been stillborn, but was living and breathing.”

Very “book club material”, as the moral dilemma presents rich fodder for discussions into the bigger questions of life. The story examines what happens when moral decisions are made under extreme circumstances and how emotion can play havoc with reason. Uncomplicated in her thematic approach and void of any moral crusading, Stedman succeeds in allowing the reader to make their own moral judgments as the story leads them down uncertain paths.

Romance novel fans can also use this book as a pathway toward literary fiction, as The Light Between Oceans does have many romantic elements. Best yet, the book’s plot is simple and easy to follow.

The book retails for S$17 (w/o GST) at Kinokuniya, MPH, and Times Bookstores.

Book Giveaway!  Two copies of The Light Between Oceans will be given away to the first two City News readers who can answer this correctly: what is the name of the island where Tom works as a lighthouse keeper?Send your answer to contest@citynews.sg along with your full name, phone number and email address by noon June 16, 2013. Winners will be notified through phone.
M L StedmanThe Light Between Oceans
0
FacebookTwitterWhatsappTelegram