An Interview With Phil Pringle: CHC Has A Future Of Incredible Blessing

City Harvest Church’s advisory pastor Phil Pringle talks about the secret power of giving thanks, his deep friendship with Kong Hee and the future of CHC.

Phil Pringle, senior minister of C3 Church in Sydney, Australia and the president of the C3 Church International, a global movement of over 240 churches, is in Singapore to conduct two weekend services back to back at CHC. He is here to support and encourage the church while CHC’s senior pastor Kong Hee and five other church leaders go through the first week of the trial against them for allegedly misusing church funds.

In this interview Pringle shares with City News how his friendship with Kong Hee began, how giving thanks is a secret weapon, and he exhorts the congregation to see beyond the trials of the present as a purchase for a future that would be a blessing to the nations.

You taught us about giving thanks yesterday. But how do you give thanks when things are really hard, when you feel betrayed or when you feel someone’s done you a great wrong?

I think the sacrifice of praise—which the Bible calls thanksgiving, giving thanks under difficult circumstances—is the best antidote to a bad attitude, because you’re grateful to God not just in the circumstance but for the circumstance. And that’s a big difference.

Sometimes we like to say, we thank God in the circumstance even though I hate the circumstance, but the Bible is actually saying, thank God for the circumstance as well. The funny thing is as soon as you’re thankful for something or someone, you see them positively. So instead of hating or criticizing them, you now see the positive in them.

That’s why Paul thanked God for the people he was writing to, because it gave him a platform for every following comment. One of the best things a pastor can do is to thank God—for his congregation, his board, his wife and children. Even though some of those people might be frustrating him, if he thanks God for them, he’s gonna change his views and see things differently.

And once you see things differently, you actually see a strategy, a way forward. If I thank God for a problem, then I’ll find a way to deal with it because the positive mind always sees a way through. The negative mind accepts defeat and can’t find a way.

You’ve been a friend of CHC since 1992. That’s 21 years till now. What was your first meeting with Pastor Kong like?

The first time I remember meeting Pastor Kong was in a very large warehouse that he had rented, but he only had maybe 120 people. So he’s always had huge faith, stepping out in enormous ways.

The very next meeting I had with him was at our annual conference, now known as the Presence Conference. And he was on his honeymoon. He came to our conference on his honeymoon. So I was very impressed with that, and I gave him a gift so he was able to go out and buy some clothes for his wife as a present.

I think that was the beginning of the relationship, because I saw in him such a great faith, such a wonderful attitude, and I just felt that he was just going to do something incredible for God.

How would you say the relationship has developed over the years?

I think our relationship is a combination of several factors. In the early years, I would have guided him and been something like a mentor to him, and I would still be that now, but only by his initiative, not mine. But I would also treat him as a peer, a colleague, and someone that I would stand with in the faith.

There are not many people in the world I would feel that I am called to lay down my life for—and I’m not trying to be dramatic—but he would be one of them. I generally feel that over the years, my Christianity is expressed in helping people I can help, who may not necessarily be those whom others have access to, such as pastors. There are many pastors who are facing difficult times whom I feel I can be of a little help to.

But I would put Pastor Kong in a totally different category than just that because he’s a close friend. I think that we should lay down our lives for our friends. That’s what the Kingdom is. It’s a privilege for me too. It’s an honor. I’m blessed to being involved with City Harvest Church.

At Presence Conference last month, you had Pastor Kong come onstage. You really showed a lot of support for him, and after that there was a lot of negative talk on the Internet. How do you deal with that?

I don’t—I don’t even bother reading it. You know, I’ll be worried if every comment about me was positive.

Why do you say that?

Well, I’m not sure you’re really being effective if you haven’t got critics. There’s not a person who’s achieving anything in the world today who hasn’t got critics. But we’ve taken criticism all our lives for following Christ, for taking steps of faith. I don’t really bother with it. Sometimes it comes across my path and I try to toughen up and not let it affect me. 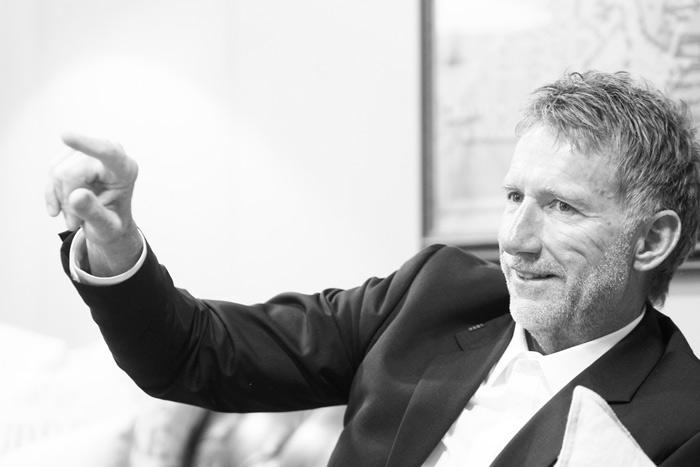 You spoke about it during your sermon (last Sunday), about the “poison” that some emails or articles carry. What if a new member in church sees something that offends them? How would you advise them to step away from it?

For a young, new person, that’s such a hard thing. I think you’ve got to be upfront and tell people how you’re feeling. In the early church there was a lot of persecution, a lot more than there is now. There are churches in the Middle East where if people know they became Christians, they could be killed.

I know of a church which last year buried 150 of its members who were killed [for being Christians]. There’s a C3 church in that same country which can’t hold meetings on a regular basis because if the locals know when they’re having a meeting they will attack, so they have to constantly change the timings, and they can’t all gather at once; it’s very underground.

So the reality of Christ coming in to a person’s life has to be very real, [not] just going to church, being religious. Because when people discover Jesus, they will pay any price. I think that’s the surest way (to stay away from the poison). But I also think if they received Christ with eyes wide open, they will see that there is a price to following Christ.

What do you see in the future of City Harvest Church?

The price it’s paying today will be the purchase of a future of incredible blessing, of great abundance. I think it will affect the world in a lot of ways, especially in terms of cell groups, culture and reaching a lost world. I think CHC will have a huge impact in China; it’ll possibly be its most major calling, but it may also affect the whole of Asia.

CHC will be celebrating its 25th anniversary next year. What should the members look towards, what should they focus on?

The next 25 years. If you extrapolate the last 25 years of growth, you’ll probably come out to half a million people, if we keep growing at the rate we’ve been growing at. So once you see an end result, you can develop a pathway to it, a strategy. That’s why God sees the end from the beginning. Every leader or person in management needs to see the end from the beginning.

You would have heard that Sun’s suspension has been lifted and that she is back as our executive director. What are your thoughts on this?

I think Sun is essential to the core, the fabric and the culture of the church, and her input should not be underestimated. Her concepts, her design, her input into the worship, the leadership and the people should not be undervalued in any way at all. I think she’s very key to the future of City Harvest Church.