In celebration of Mother’s Day, Kong Hee preached four characteristics of a godly mother out of the story of Bathsheba.

During the tragic Sichuan Earthquake in 2008, disaster relief workers uncovered the body of a young mother under what was left of a house. Upon closer inspection, the team discovered an infant who was alive in the arms of his dead mother, who had protected him with her life. Together with the body, they found a mobile phone, into which the woman had left a text message: “My dearest child, if you are able to survive, you must remember that Mommy loves you.” Despite the many dead bodies they had already encountered, this scene drove the relief workers to tears.

Opening his Mother’s Day sermon with this story on the weekend of 7 and 8 May, Kong Hee, the senior pastor of City Harvest Church said to the congregation that there are few things greater than a mother’s love, and he reminded the church to celebrate their mothers that weekend. He listed out the many kinds of mothers in this world—from Tiger Moms to fitspo moms—before introducing his subject of the day: the godly mother. To illustrate his point, he chose the life of Bathsheba.

Bathsheba may not be the first when one thinks of virtuous Bible women, but Pastor Kong points out that she was a godly woman. She is first mentioned in the Bible in 2 Samuel 11, where King David spies her bathing from his roof top and commands his men to bring her to him.

“This was not David at his finest,” the senior pastor added. “He felt entitled to get what he didn’t have—that was Uriah’s wife Bathsheba—and to avoid what he didn’t want—which was to go to war like he was supposed to.”

What followed next was a terrible act—King David slept with Bathsheba. Being a woman of that time, what more in the presence of the most powerful man in the land, Bathsheba did not have any choice in the matter.

But 2 Sam 11:4 reveals that incredible mettle that she was made of: “Then David sent messengers and had her brought, and when she came to him, he slept with her and when she had purified herself from her uncleanness, she returned to her house.”

It was likely that Bathsheba would have been traumatised by David’s victimisation, but her first act after being forced into sex was to “purify herself”, according to Leviticus. To her, God came first.

David’s cruelty towards her did not end there. When he discovered he had made her pregnant, he ordered the murder of her husband Uriah, who, together with Bathsheba’s father Eliam was one of David’s elite soldiers and bodyguards. The Bible says that Bathsheba mourned the death of her beloved husband. After killing her husband, King David ordered Bathsheba to be brought to the palace, where he married her. Bathsheba endured further tragedy when she lost her baby.

“But God comforted her with another baby, Solomon, who became a great king,” Pastor Kong said, pointing out that despite the abuse Bathsheba had been through she did not become bitter.

He continued, “It is believed that Proverbs 1 to 10 were the words of Bathsheba to her son, Solomon. Also, she could be the Proverbs 31 woman, or it could be her describing such a woman to Solomon.”

Prov 31:10 famously reads, “Charm is deceptive, and beauty is fleeting; but a woman who fears the Lord is to be praised.” This describes Bathsheba herself, and out of that, Pastor Kong shared four characteristics of a godly woman that the church can learn from the life of Bathsheba. 1. A GODLY MOTHER READS THE BIBLE

Bathsheba was conscious of God’s Commandment even after being sexually violated. The love that she had for the Bible have impacted her children greatly, especially Solomon. When he became king, he would pen down the words and advice that he received from his mother, such as Prov 3:1-2, “My son, do not forget my teaching, but keep my commands in your heart, for they will prolong your life many years and bring you peace and prosperity.”

One of the biggest roles a godly mother plays is to impart to her children the ways of God, said the pastor, quoting Deuteronomy 6:6-7, “These commandments that I give you today are to be on your hearts. Impress them on your children. Talk about them when you sit at home and when you walk along the road, when you lie down and when you get up.”

2. A GODLY MOTHER PRAYS AND TRUSTS THE LORD

Proverbs 3:5-6 says,“Trust in the Lord with all your heart and lean not on your own understanding; in all your ways submit to him, and he will make your paths straight.”

This is the instruction that Bathsheba gave to Solomon. “When you learn to pray over every situation and trust in the Lord, He will make your path straight, He will make a way when there seems no way,” Pastor Kong explained.

A mother’s faith is not about how great she is, but how good God is. God took what was ugly about Bathsheba’s life and turned it into a life that bore great testimony. “Against all odds, she went to become the great mother of a nation and raised up Solomon to become the wisest king,” noted Pastor Kong.

Through her constant prayer and trust in God, Bathsheba received the blessing of being one of only five mothers listed in the genealogy of Jesus Christ as part of the Messianic bloodline. 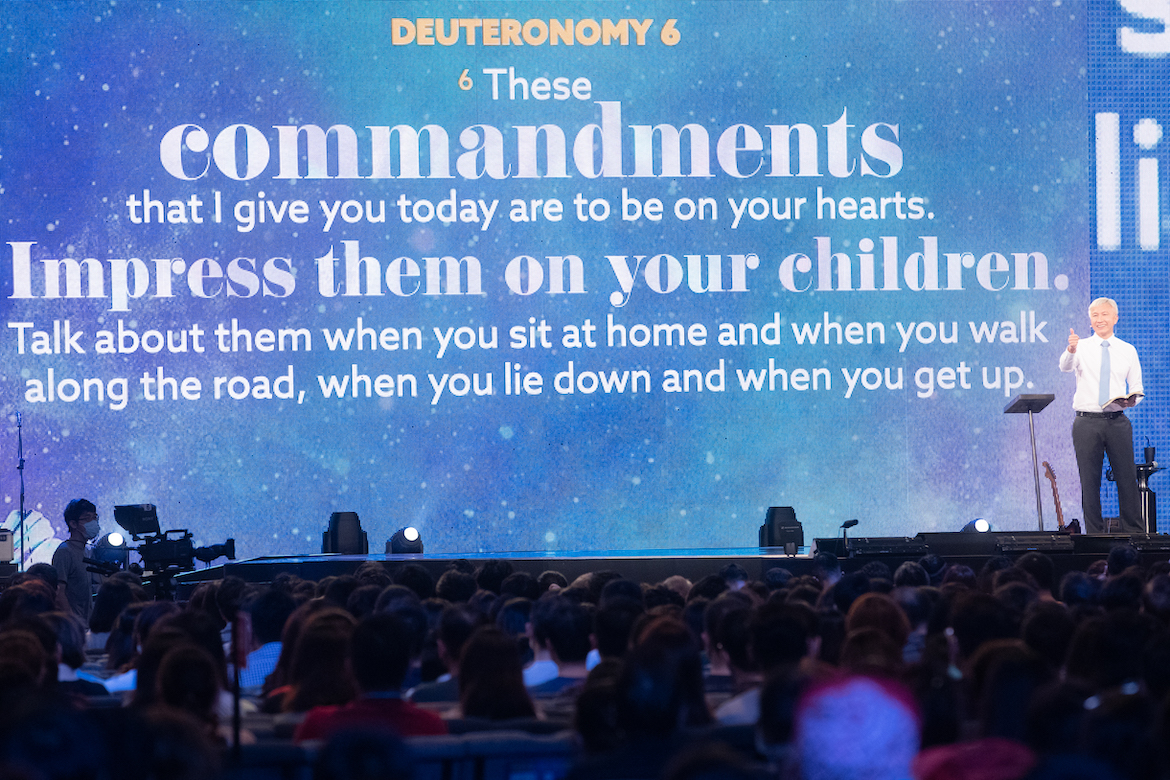 “Let love and faithfulness never leave you,” read Proverbs 3:3-4 “Always be loving because God is love,” Pastor Kong reminded the church. “Bathsheba chose love even when it was hard.” She learnt to love and stay faithful to David after the death of her husband Uriah.

Not every woman is called to be a mother, said the pastor. Every mother plays an important role in their children’s lives, which is to give them nurturing love. “Your tenderness and nurturing do so much for your kids,” he encouraged. “No matter how old your children are, they will always need your love. And when you show unconditional love to your children, they get a glimpse of God’s love.”

Bathsheba exemplified forgiveness throughout her life. She chose not to be bitter about David’s sinful actions towards her, or to resent the patriarchy that put her through pain and suffering. As Christians, like Bathsheba, we must freely forgive just as we have been forgiven, the pastor said.

Reading from Ephesians 4:31-32, Pastor Kong reminded the congregation to “Get rid of all bitterness, rage and anger, brawling and slander, along with every form of malice. Be kind and compassionate to one another, forgiving each other, just as in Christ God forgave you.”

When Christians receive the revelation that God has forgiven them over and over, they can easily be gracious to others. Bathsheba showed grace to David when he hurt her repeatedly.

Pastor Kong closed his sermon acknowledging that mothers are some of the busiest people in the world, with multiple roles to fulfil and the needs of many to meet. “You can be godly at the same time if you are willing to let the Holy Spirit to help you,” he encouraged.

He ended the service by praying for all the mothers in the congregation, and reminding sons and daughters to give their mothers a hug on Mother’s Day.