Amy Grant holds the title of the first Christian artist to successfully cross over to mainstream music. She went from a teenaged gospel music darling to a Billboard Top 40 artist. Her 1988 album Lead Me On—though not her best-selling—received critical acclaim and has been called the best Contemporary Christian album of all time. [T]hat record came together a little bit at a time. It was honest and vibrant, and I felt, personally and spiritually, I was probably at the most honest place I’d been in a long time.

Amy Grant in an interview for Lead Me On (20th Anniversary Edition), conducted by Tidal music streaming service

To Christian music listeners of the late 1970s and early 1980s, Amy Grant was white gospel’s first superstar and the definitive queen of Christian pop. Signed to a record label at the age of 15—she would go on to release her first album while still attending high school—Grant’s faith-based easy listening music not only became a soundtrack for teenage Christian girls across America, but would later act as a springboard for further success in gospel and secular music markets. Grant remains to this day one of the most successful crossover artists in gospel music, but it was a move that would prove to court controversy and criticism from both audiences.

The initial enthusiasm that led to Myrrh Records (a subsidiary of Word Records) to sign Grant was not just borne from her marketable girl next door good looks and mature mezzo-soprano voice. She also came as a nascent songwriter and her label utilised her burgeoning talents by using seven of her songs on her debut self-titled album.

It was on this first release that announced Grant as a credible Christian songstress who wrote and sung about Jesus Christ: her newfound listenership tuned into this fact, finding music that reflected their own biblical morals and beliefs. With that unshakeable platform, two years later, Grant’s audience embraced her next album My Father’s Eyes, rewarding her with her first Christian number one single for the album’s title track, and her first Grammy nomination.

Carefully treading the path of pleasing a sometimes critical, outspoken and fickle Christian audience, Grant’s nexus (and some say her true musical arrival) happened on her 1982 album Age To Age. With the limp arrangements and uneven production of her former releases now behind her, Age To Age reflected a more confident artist showing both progress in songwriting and overall energy. Hit songs from the album included “Sing Your Praise To The Lord” with its genre-defying piano intro and unusual time signature and the ballad, “El Shaddai”, which helped her to become the first solo Christian artist to achieve gold and platinum album sales.

CROSSING OVER INTO CONTROVERSY

Two albums later and now with a well-established (and some would say well- earned) gospel following behind her, Grant courted controversy with her 1985 album, Unguarded. 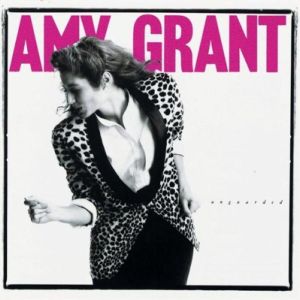 Gone were the explicit references to God, Jesus Christ and faith; in their place were the “positive pop” vibes of a gospel artist that some declared had gone rogue. The unheralded Christian criticism towards this album came in many forms: some criticised Grant for being “overly sexual” for wearing a leopard- print jacket on the album cover; others, crestfallen, saying that her faith-based message had been either tuned down or tuned out completely. Surely MTV and upbeat danceable pop music wasn’t what Grant was about, came the cry of her Christian fanbase.

The disgruntled American Christian community’s reaction to Unguarded was so loud that it eventually spilled out into the mainstream American media. Regional newspapers picked up on the curious flight of a gospel star courting dual audiences and pondered how Grant’s album now sat next to the likes of Madonna, Prince and Cyndi Lauper in the records bins and on the music charts.

Despite—or maybe because—of the controversy, Unguarded became Grant’s second platinum album in America. Following that, Grant returned to safe ground and released another Christmas album. Two years after that, she released her ninth album, Lead Me On.

The three-year gap between Unguarded and Lead Me On was likely a period for Grant to cool her guns, given the shifting attention of her audience base. Lead Me On did not sell as well as Unguarded, but it still reached gold in the US and Canada. Reflecting the confusion her two audiences continued to experience were the divergent reactions from her record label Word and their distribution and promotional partner, A&M Records. While Word was delighted with the album’s quality and content, A&M was far less kind, stating, “We just want you to know if you get any airplay on this record at all, it’s because we worked our tails off.”

Cited by influential CCM Magazine as the greatest Contemporary Christian album of all time, Lead Me On was not so much a return to former glory for Grant but more a drilling down to where she was at, at that point of time in her life. Juggling recording duties while pregnant with her first son, Matthew, and returning to the studio soon after giving birth, there is a nuance to the album which could only have come from a maturing artist reflecting on the lessons she’s learned from life.

Lead Me On ran 50 percent longer than Grant’s previous albums, and the album was not constrained by a pop music format. The “three minutes of pure escapism” compositions that had been the hallmark of the younger Amy Grant were nowhere to be found here. Lead Me On was unashamedly an “album” album: 12 tracks, some nearing six minutes in length, to be consumed together as a whole and not distorted by hit singles and high rotation videos. What was even more refreshing was that Grant’s musical reach was never over-extended or overbearing—major credit must be given to her supporting songwriters and seasoned backing band for finding that balance.

SONGS FROM A MATURING CHRISTIAN’S HEART

Lead Me On was, in many ways, Grant’s “coming of age” album. Ardent music fans talked of deeper album cuts—cherished lesser-known songs that were not released as singles from an album. In this particular vein of fan-led approval, Lead Me On sounds like an emphatic collection of deeper album cuts that all happen to appear on the same release. Unlike a greatest hits collection that’s drawn from an artist’s wider output, there is an incredible cohesiveness amongst the songs on this album. It is difficult to pick stand-out tracks on an album that is designed to be digested as a whole but setting musicality to the side, there are certain recurrent themes that heavily flavour proceedings on Lead Me On. Self-referential lyrics are a force that Grant and her team uses with an even hand on the album’s opener, “1974 (We Were Young)”. Sharing the innocence of her salvation experience as a teenager, this is not so much Grant setting the album’s trajectory but more a strong nod to the honesty of the artist within—an updating of Grant’s gospel sound and message from the early ‘80s. With its wonderful double tracked chorus and sonorous backing vocals, the magic of “1974” is in the welcoming aspect of the music and the ‘This is who I am’ rawness that is inclusive and relatable, like a hug from a loved one.

The self-referential themes shift darker in the song “Shadows”, where Grant introduces us to the duality of the light/darkness paradigm that is the Christian experience. Reminiscent of Apostle Paul’s lament in Romans 7:15 where he cries: “I do not understand what I do. For what I want to do I do not do, but what I hate I do”, the song’s message presents the everyday struggle that believers wrestle with when faced with the pull of sin.

This theme of struggle is further personified in the mid-tempo ballad, “Saved By Love”. Sung in the third person of “Laura”, it addresses the fears she has for her young family. The lyrics could have reflected the experience of Grant and her bandmate then-husband Gary Chapman as they brought their first child into the world. The song’s message is that even if the world around us makes no sense, it’s Jesus’ love that we need the most.

On the aching ballad, “If These Walls Could Speak”, the ultimate act of love—forgiveness—is sought within the bounds of a loving relationship. Sung in an authentic, somber pitch, its sparse piano arrangement adding to the emotive content, Grant’s melancholy tone leverages the lyrics to a heartfelt confession.

At this halfway point in the album, Grant heads off in a rock praise-worthy direction on the following three songs: “All Right”, “Wait For The Healing” and “Sure Enough”. Grant and rock music have always been uneasy bedfellows and thankfully it’s this country music-tinged backing that suits her well. With lyrics that touch on areas of personal redemption, her 1960s experience, and the forbearance required of marriage, Grant leans masterfully on her extensive array of studio musicians and gives latitude to virtuoso session guitarist Dann Huff to add bite and power to her sound.

Fittingly, though not unexpectedly, Lead Me On bookends with a song which closes one chapter of Grant’s career while being a precursor of what she was going to record next. With “Say Once More”, co-written with Gardner Cole (songwriter for Madonna, Cher, Jody Watley), Grant ends the album with a dreamy synth pop ballad that featured the same opaque lyrics that would continue to challenge her Christian fanbase. The song is Grant’s ephemeral goodbye before she changes gears and audiences to go on and record the biggest selling album of her career, Heart In Motion (1990).

Lead Me On was a fitting “send-off” as Grant left at the right time, having said all that she needed to say. In laying herself open as a solo artist, though with a supporting cast of 32 musicians, she rewarded her fans with a big budget legacy recording that, 34 years after its release, doesn’t sound dated or tired. On the contrary, Lead Me On demands a bigger audience.

Listening to this album again, and digging deeper, we find an artist looking for love, hope and solace, no different to when she was a fledgling musician in 1977. Even though her next album Heart in Motion would turn Grant into a secular superstar, it’s here on Lead Me On, amidst all the studio polish and craftsmanship, that we find her heart asking the Lord to lead her. For Amy Grant, that is a legacy that is to be remembered.