Here To Connect For Such A Time As This: City Radio Celebrates 10 Years

2021 marks 10 years since CityRadio first began airing its programmes. We take a walk back through the best of the last decade with producer Bernard Loh.

CityRadio’s tagline is simple but full of meaning: “Here To Connect”.

“Through the years, we have not deviated from that one objective,” says CityRadio producer Bernard Loh. “That’s what we focus our efforts on—connecting. Every programme, every song on the playlist is deliberately chosen to connect with our audience.”

CityRadio is an Internet radio station, providing music and spiritual sharings on demand to anyone around the world. The station began a decade ago with seven programmes, and now it hosts eight programmes along with a 24-hour Christian music station. Listeners are mostly local CHC members, as well as members of CHC’s affiliates in The Harvest Network, and alumni of CHC’s School of Theology. The cumulative average weekly listenership for its podcast-style programmes is 7,630, not including City Radio Air. 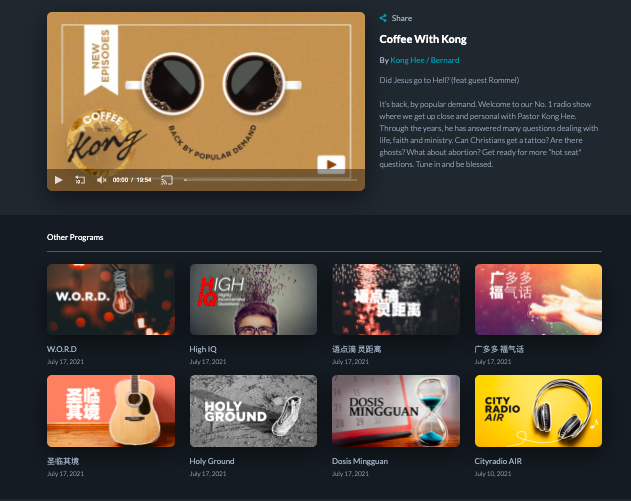 Over the last 10 years, CityRadio has honed its own sound, and tuning in is very much a part of a City Harvester’s church life. “Just the other day, my colleague sent me a video of his son singing the radio jingle! The boy has become so used to hearing it whenever his dad tunes in to the station,” Bernard relates with a laugh.

CityRadio was an idea Pastor Kong Hee and his wife Sun had in 2010. They shared it with Bernard, and in 2011, he joined the CHC office as program producer. (Read genesis story here). What began as a one-man show now includes programme editor Mervyn Lim, and more than 40 volunteers.

The idea for a 24-hour radio station—as an add-on to the podcast-style programmes that CityRadio had been running since 2011—came from Pastor Kong. Bernard tells the story: in 2015, he received a call at 1.30am from Pastor Kong who was in Los Angeles at the time. The pastor excitedly proposed the idea of starting a 24-hour radio station, modelled after the highly popular American Christian radio station, K-Love. Shortly, City Radio introduced CityRadio AIR, which plays Christian music all day long. The station has a daily listenership of 155 currently.

THE EVOLUTION OF COFFEE WITH KONG 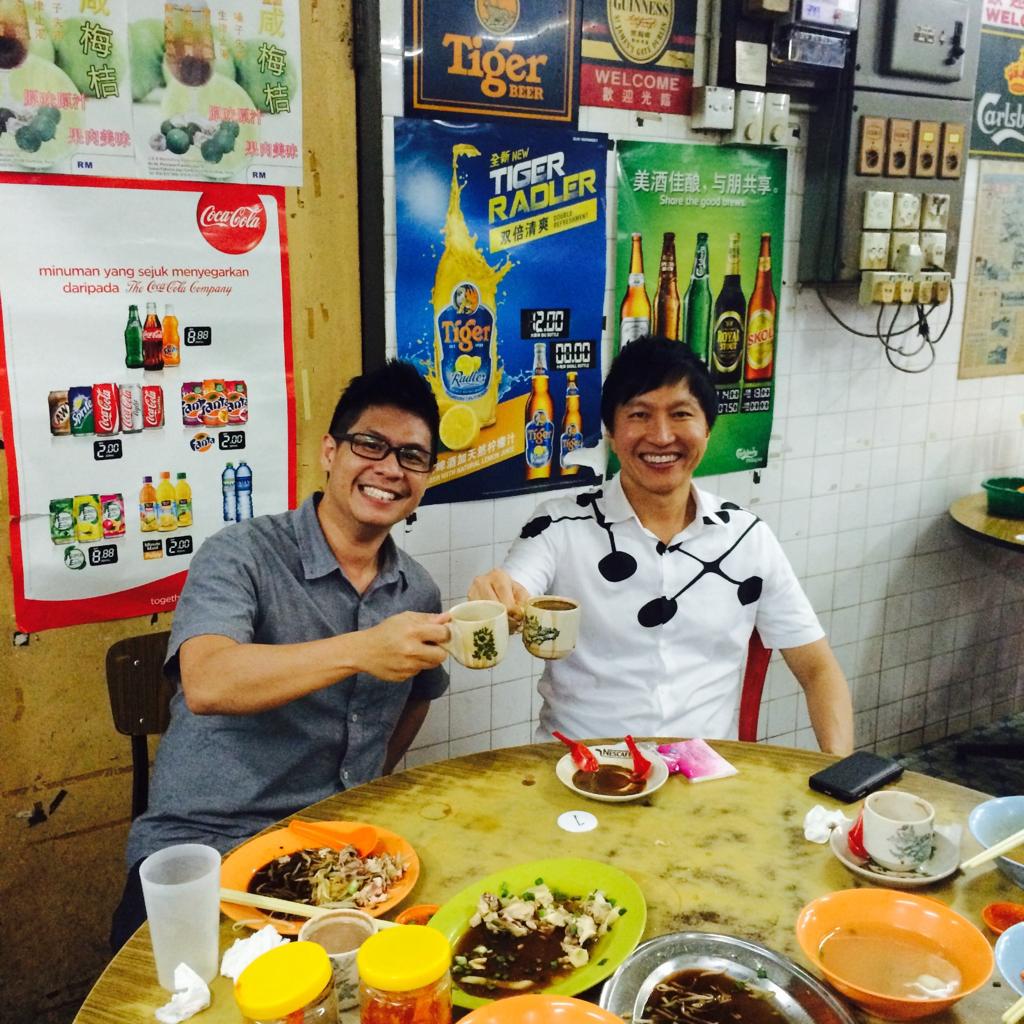 When Pastor Kong had to serve time for two years, Bernard was faced with the challenge of keeping CWK going. After taking a break of just four months, the producer had a brainwave while attending service one day: to take the best episodes of CWK and do repeat broadcasts. After all, CityRadio had six years of material to work with.

This turned out to be a special experience for Bernard. “It was as if Pastor had never left,” he says about listening to previous recordings of the show. “It was like he was there talking to me. That’s the beauty of radio, it’s very personal. And our church members get to know a side of Pastor that is not seen on the pulpit.”

CWK resumed recording last year in the middle of the pandemic. Unsurprisingly, ratings were even higher. The episodes of CWK have also recently been uploaded on Spotify where they have the potential to reach an even wider audience. “Spotify is the large ocean while our app is a small pond,” Bernard describes.

Each episode on CityRadio lasts 10 minutes. But Spotify shows are typically 30 minutes long. Bernard was inspired by a 3-in-1 coffee pack to create Spotify shows of three CWK episodes each, all bearing a related theme. So CWK shows on Spotify include topics like “Ministry and Calling”, “Discipleship” and “Issues in Marriage”.

“The surprising hit was our episode titled ‘Tattoos, Yoga and Plastic Surgery’ which received the highest ratings,” says Bernard.

Working so closely with Pastor Kong for so many years has been personally rewarding for him. He names one important lesson, that of discipleship, which is about teaching and observing (Mt 28:20)—he had the privilege to observe Pastor Kong at close quarters year after year. “There was a positive shift in my household and in every aspect of my life,” he reveals.

There is just one thing Bernard wants to do with CWK, and that is to compile Pastor Kong’s words into a book so that the hearing-impaired can also “hear” these sessions.

One of the most-listened programmes on CityRadio during this pandemic has been Holy Ground, which draws its name from Exodus 3:5, “take off your sandals, for the place where you are standing is holy ground”.

Holy Ground was birthed from a vision Bernard had of a person lying in a hospital bed, with CityRadio playing at his side and someone prophesying over the sick person. That prompted him to create a one-hour music programme that listeners could play during their quiet time.

One listener Erin Wong wrote, “I was listening to this week’s Holy Ground and the two passages you quoted, about loving God and myself, were a reminder to me during this period of time. Thank you for serving and ministering through CityRadio; I’m sure many are blessed through Holy Ground, like me.”

Another opportunity arose during the pandemic for CityRadio, and that was to produce a Dialect devotion programme. COVID meant shutting down on-site Dialect Service. In just one week, Bernard, together with Pastor Maria Tok and Choong Choe Yeen of Dialect Service had recorded the new programme. It proved such a hit that it continues today to supplement the Dialect Service. The programme features a Hokkien devotional followed by a song and ends with a devotion in Cantonese.

Pastor Maria explains that her volunteers help the elderly tune in to the programme when they pay them a visit, or the Dialect team would send the programme to church members who want to share the Word with their dialect-speaking parents.

“It’s very heart-warming and touching to hear a language [on City Radio] that is close to our hearts,” says Dialect Service volunteer Jessie Tan. “It has also become a platform for us, the  younger generation, to learn more Hokkien so as to reach out to old folks.” 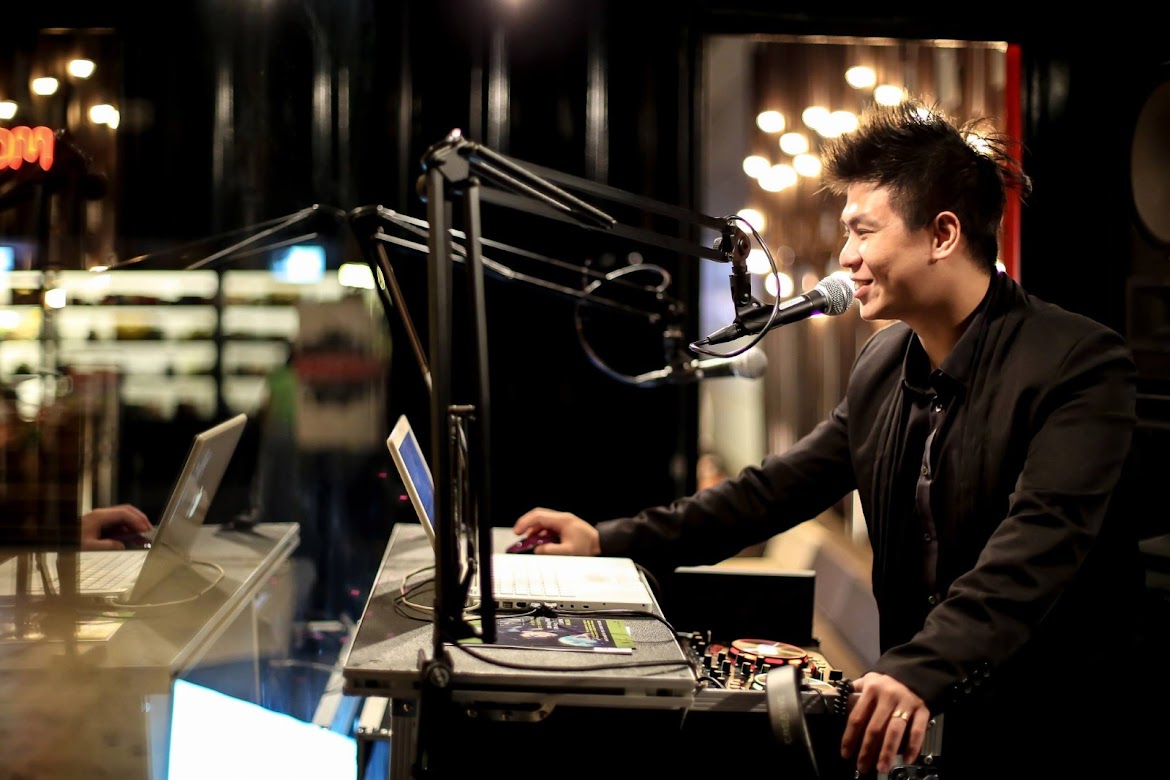 This year, Bernard’s direction from the Lord is “partnership”. As a result, CityRadio has been collaborating with different ministries and departments in CHC, from working with the graphics department for its 10th Anniversary celebration, to creating different programmes with Indonesian and Filipino ministries. He describes CityRadio as “a magazine rack” as it has programmes that connect with different segments of the church community. It is even collaborating with the Drama Ministry on a special programme that will debut soon.

“When the pandemic happened in 2020, it really felt like CityRadio was born for such a time as this,” says Bernard. “The ones who weren’t seen continued to be the ones who could only be heard. I like to imagine that someone has had a tough day of Zoom meetings, but when they tune in to Holy Ground, we would read a verse to encourage them and the songs lift their worry and burden. Or someone has too much stress over the upcoming restructuring in the office, and we play that old worship song that she listened to when she first got saved, and all that anxiety just fades away.”