In the first instalment of his series on The Kingdom of Heaven, Pastor Kong Hee taught the four laws of the Kingdom. 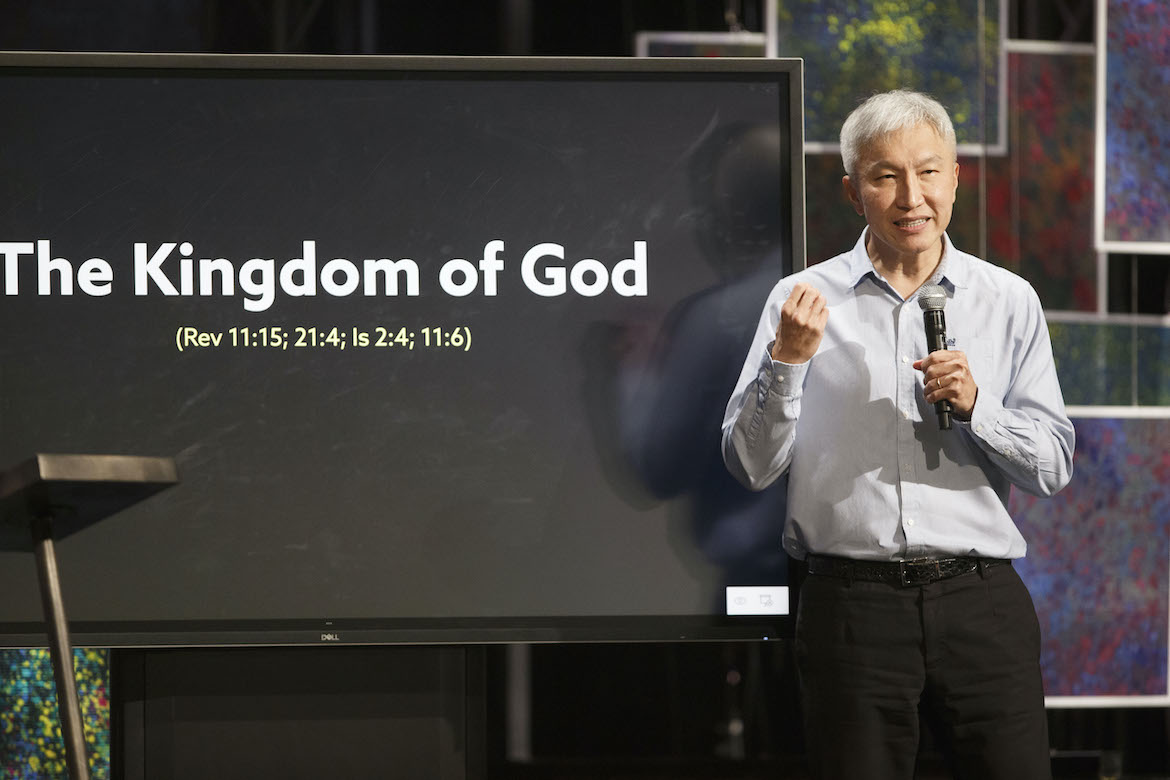 When Jesus returns a second time, He will rule and reign in this earth (Mt 25:31) “At that time, there’ll be more sadness and sorrow, no more sickness or physical pain,” Pastor Kong declared. “The good news is, we can have a taste of the Kingdom right now, a taste of the power and the glory of the future kingdom in our lifetime.” (Heb 6:5)

The focus of Jesus’ earthly ministry was to proclaim the coming of this Kingdom. Whenever he cast out the demon or healed a sick person, He demonstrated the power of the Kingdom. Christians are born again to witness the Kingdom of God and to one day enter into it.

WHAT IS THE KINGDOM OF GOD?

“The more He rules in our lives, the more victorious we will be,” Pastor Kong taught. “The more God reigns as King, the more we will find the answers and provisions to our needs.” He went on to teach that the rule of God is also His righteousness. 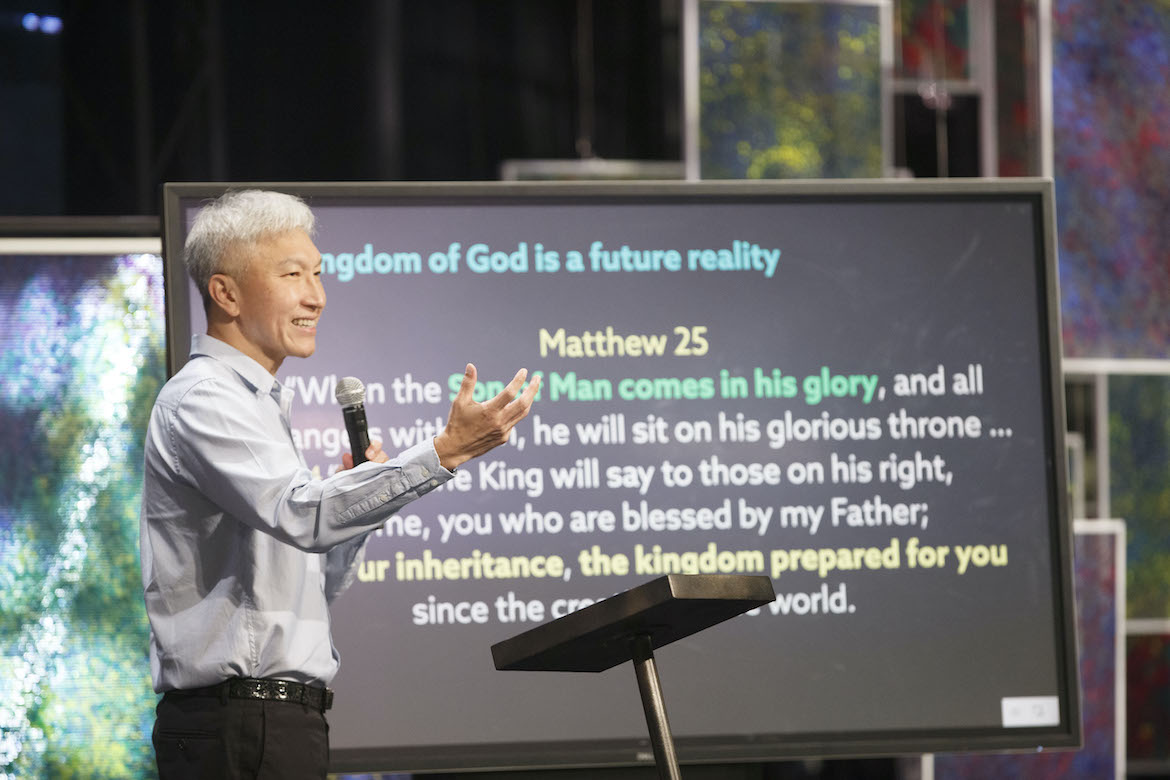 “Jesus is telling us, ‘Don’t be angry.’ Why? Because being angry is very dangerous for your soul,” Pastor Kong cautioned.

“Murder is sin, but how does a person become murderous? He must first be angry,” the pastor pointed out. “If you are angry like this—[giving in to] deep anger, resentment, bitterness, hatred, contempt—you can end up in the Lake of Fire.”

That is why Ephesians 4:26 teaches Christians to “‘Be angry, and do not sin’: do not let the sun go down on your wrath”. When a person allows anger to fester for a long time, he is giving the devil a foothold in his life. Eventually, the devil will create so much havoc that the person is disqualified from entering the Kingdom of Heaven.

The pastor advised the congregation to have “zero anger, zero frustration and irritation”. But that, he admitted, is impossible to achieve by human strength; it can only be achieved if a person walks in the Spirit and allows God to rule in his life.

2. The Law Of Purity

Matthew 5:27-28 reads, “You have heard that it was said to those of old, ‘You shall not commit adultery.’ But I say to you that whoever looks at a woman to lust for her has already committed adultery with her in his heart.”

This means that Jesus not only looks at the outward actions but the secret desires of a person’s heart. “This is very important,” the pastor said. “Because only the pure in heart can see God.”

In the next two verses, Jesus implored His followers to deal with their secret cravings whatever the cost. Pastor Kong explained that Jesus was not asking Christians to literally pluck out their eyes and cut off their hands, but to be serious about getting rid of the problem.

Going on to the topic of divorce and remarrying, Pastor Kong first addressed those who had remarried after getting a divorce. He assured them that God gives grace and He forgives.

He went on to read Matt 5:31 which addresses the issue of divorce, which the people of that time took lightly. Jesus was telling them that marriage is sacred to God—it is a reflection of Jesus’ relationship with the church.

“Marriage is meant to teach us to be unselfish and to have agape love,” the pastor said. A person needs to recognise that God wants to develop his character through his marriage—that is more important than being happy in the marriage. Which is why, unless there is abandonment or abuse in a marriage, a couple should stay in their marriage and not give it up easily.

Not being in love anymore is not a good reason to divorce, Pastor Kong said. “Every form of divorce like this is rooted in unfaithfulness and sexual immorality,”he continued. “To live in the future Kingdom, you can’t have lust in your hearts, because you won’t be able to see God.” 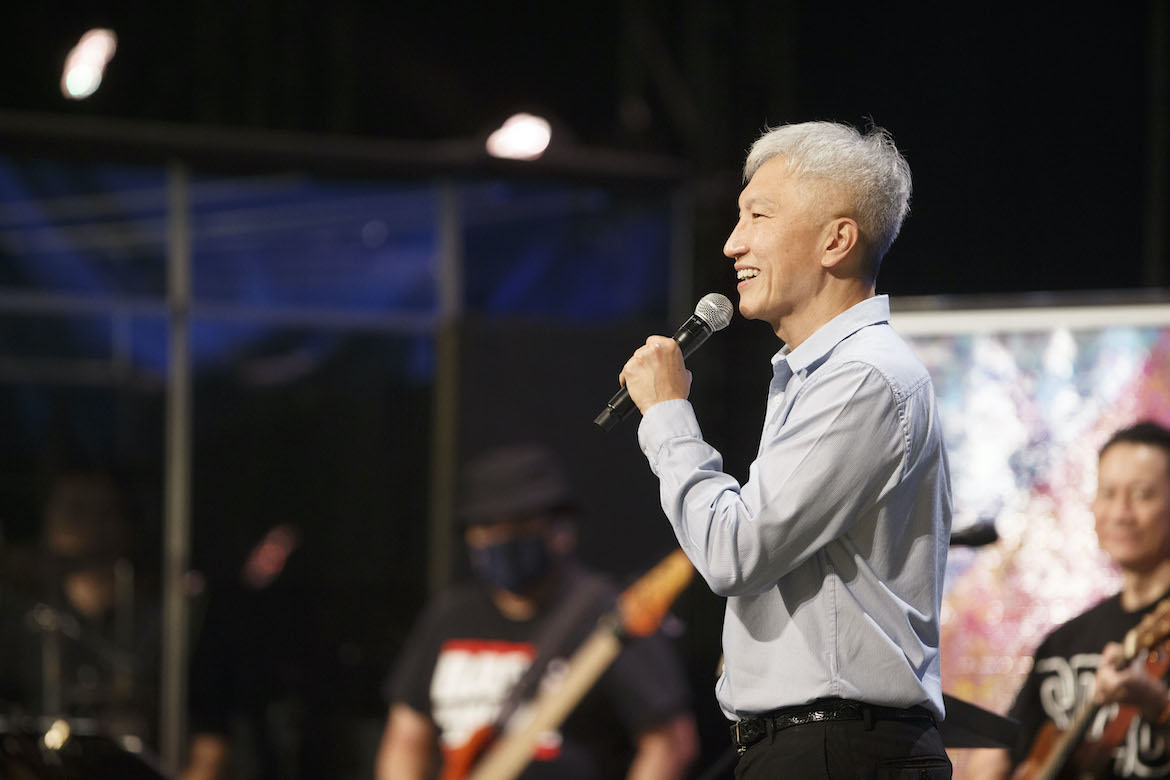 3. The Law Of Honesty

Reading Matthew 5:34-36, Pastor Kong explained that Jesus is not saying that a person cannot take an oath. He is saying that an honest person does not need to swear for people to believe them.

The next verse reads, “But let your ‘Yes’ be ‘Yes,’ and your ‘No,’ ‘No.’ For whatever is more than these is from the evil one.” This means that a person should not make a promise that he does not intend to keep, explained the pastor. “The Kingdom of righteousness demands perfect honesty.”

Explaining the last law of the Kingdom, Pastor Kong said that in Matt 5:38-41, Jesus was not asking Christians to be push-overs. “The point Jesus made is this: God’s Kingdom righteousness doesn’t allow room for personal revenge,” he taught. “When you’re hurt and wounded, don’t retaliate. Your life must be completely free from any spirit of revenge or self-vindication.”

He went on to explain that the Kingdom of God works differently from that of the world—God wants His people to love their enemies. This means to forgive them, to pray for them and bless them. This seems impossible to do, but Jesus did that on the Cross and He wants His believers to follow in His footsteps.

In closing, Pastor Kong explained that to seek first the Kingdom of God means to seek to fulfil after these four laws—the desire to be free from anger, free from bodily cravings, to be perfectly honest and to have perfect love.

“Jesus says if you seek God like this, all the blessings that you will ever need will flow into your life,” he said.