There’s No Place Like Home: The Return To Suntec

When City Harvest Church re-opened its doors in December last year, there was much excitement, and also many rules and regulations when it came to attending on-site services. If you have not yet stepped back into the church since the Circuit Breaker, let City News tell you what it entails.

When CHC announced that it would resume its on-site services at Christmas last year, the news was met with two different reactions: some were excited to finally return to Suntec Singapore for service, while others still had many concerns. My group of friends and I pounced on the opportunity to attend on-site services. The strict safe management measures meant that each service could only seat 250 people. For that Christmas weekend, CHC held four services from Dec 25 to 27, 2020.  As this was a first for CHC, the initial system of ticket distribution was through an online ballot system: each individual could ballot for up to five seats.

My friends and I made two separate ballots for three and four people respectively. The random selection made it all the more exciting for us as we had to wait a few days for the results. Both groups received good news the following Tuesday that they had balloted successfully, and so we made our way down to Suntec Singapore for the Christmas service on Dec 27. It really felt like we had won a prize, as it had been a full 10 months since we last attended church service at Suntec Singapore.

On the day of the service, instead of arriving early to get seats in pre-COVID days, we arrived early to do the requisite rounds Safe Entry check-in and temperature-taking—yes there are several rounds. Once when we entered Suntec Singapore at level one (where the big LED screen is located), the Suntec Security team took our temperature and checked that we had completed the Safe Entry check-in to Suntec Singapore. We also had to show them our e-ticket for the service. Once we arrived at level six, we had to do a Safe Entry check-in to City Harvest Church and activate our e-tickets. 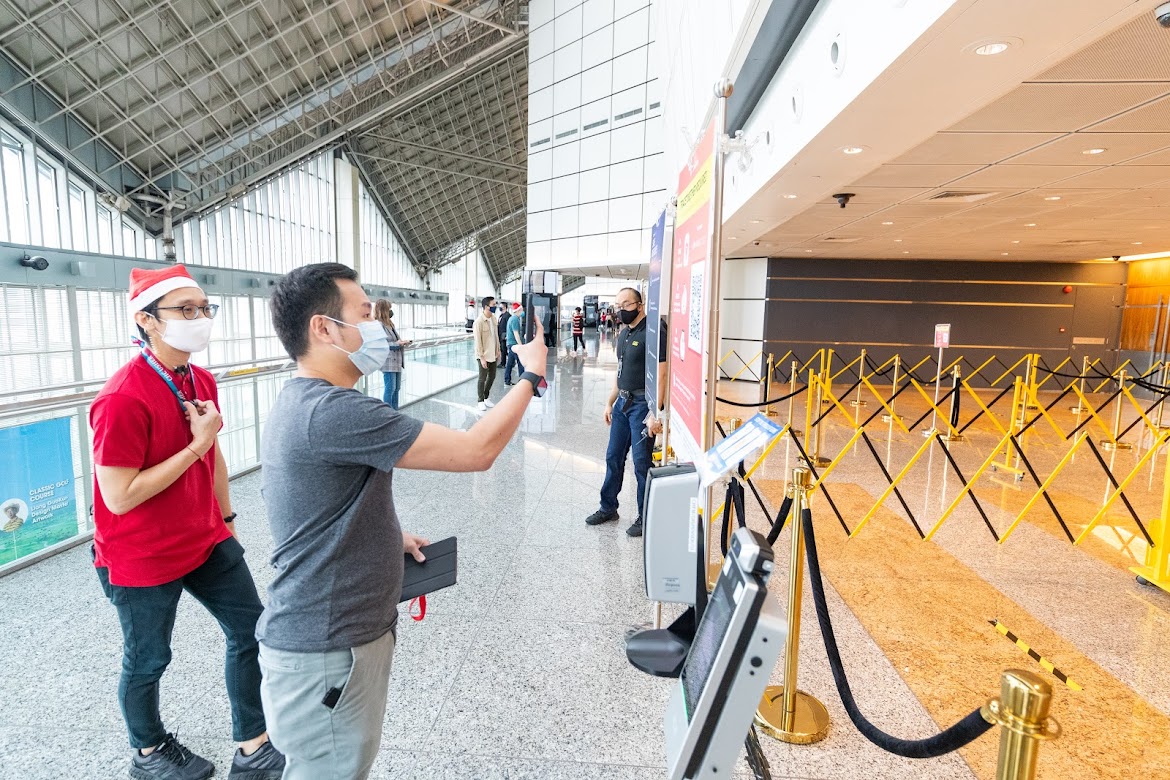 Going into the hall was an orderly affair. The hall was demarcated into five different zones (A to E). The facilities team had laid out queue poles, both outside and inside the hall, marking out the paths to be taken by the members allocated to each zone. Since our e-tickets were for two groups of people allocated to two different zones, we entered Halls 601 to 604 from two different entrances. We had to sit at the seats indicated on the e-ticket and were not allowed to mingle with our friends sitting in another zone.

The main hall set-up was different from before. Instead of the usual rows of seats filling the arena and terrace sections, only 250 seats were laid out in the arena with black curtains enveloping the place. In December, live worship was not yet allowed so CityWorship, CHC’s worship ministry, led worship from Hall 606—this was streamed live to the LED screen in the main hall. Everyone had to keep their masks on and singing was not allowed, so the claps during praise resonated loudly. I have to admit it was most awkward praising God without using my voice. 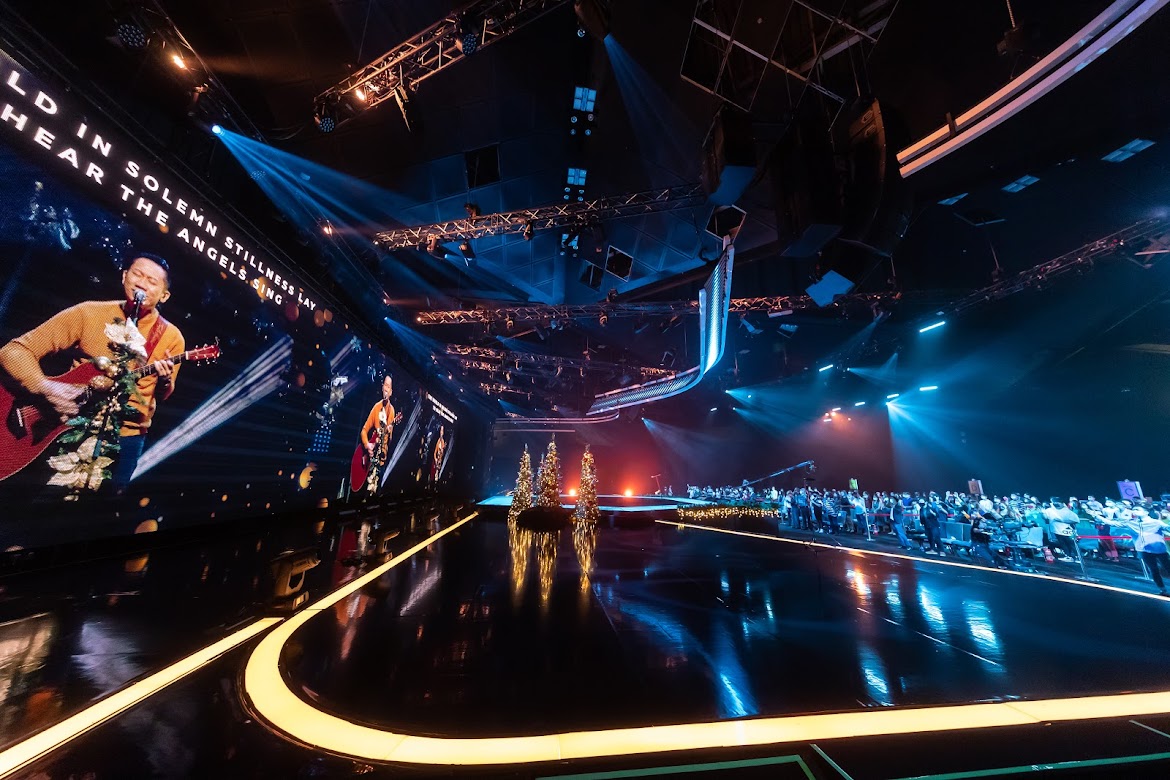 At the end of the service, we got to light up Christmas candles—the magic of seeing candlelight filling up a dark hall row by row remained, even though we had to take our beautiful candlelight photos with our masks on. Instead of blowing the candle out, we also had to awkwardly snuff them out by waving our hands.

Once the service ended, we had to exit the hall immediately. As mingling was not encouraged, there was no Hall 605 or Hotspot for us to meet up or hang out at before and after service. Nevertheless, my group enjoyed a good Shake Shack lunch on the ground floor of the convention centre as we caught up with each other’s lives.

Elly Soo, a tech support manager, was at the service. She shared, “Being onsite, I could feel God’s presence really strongly. I was personally very touched and felt relief from my personal issues. Getting to attend with my cell group friends and fellowshipping together after service also built a deeper bond among us, something I feel is irreplaceable even with virtual meetings.”

With the experience of Christmas 2020 at the back of our minds, my friends and I eagerly awaited our next chance to ballot again. Each successful applicant had to wait four weeks before they could ballot again for an e-ticket. On the weekend of Feb 6 and 7, we were blessed to be awarded five e-tickets.

After the Christmas 2020 service, CHC’s main services have been held at the Hall 606 Theatre. By now, live music was allowed in the hall. There was only one main entrance to the hall and the entrance was demarcated into five sections for the respective zones.

Praise and worship was followed by an offering and then the preaching of the Word. It was a familiar routine, in a not-so-familiar environment. Perhaps I had become too used to online services that being on-site felt like a novel experience. 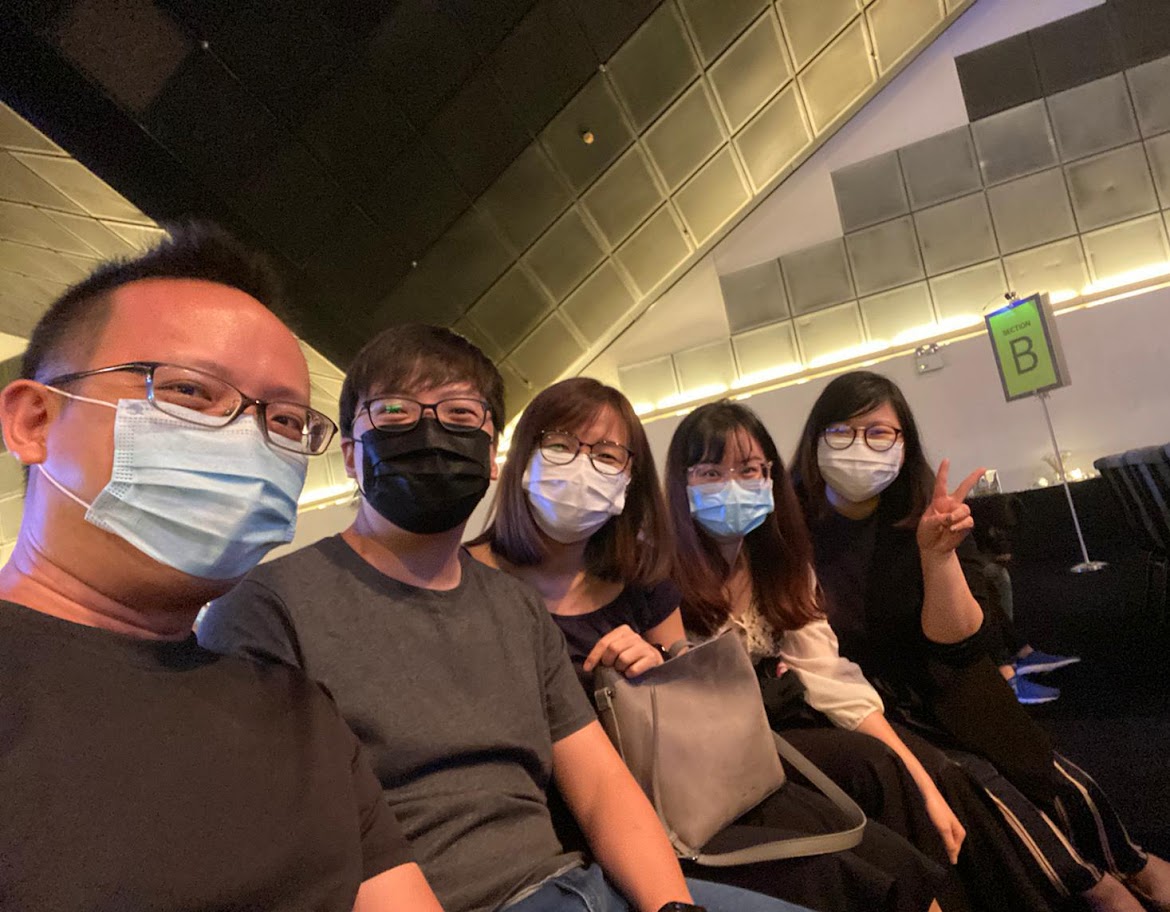 As I leaned back into my Zone B2-6 seat, I realised that being able to step into Suntec Singapore for on-site services had never felt so precious. For some of us, chilling at the Hangout, enjoying the awesome tunes from the siren-red CityRadio booth and smelling the fragrance of coffee from the coffee corner used to be a weekly affair—one we miss very much. Coming early to get seats for the cell group or stopping to chit-chat with friends in the hall used to be a common thing. Celebrating birthdays or holding a post-service briefing in large groups after services used to be a norm. All these have become things of the past. Having a hybrid of on-site services with online streaming is a reminder that as Christians, we cannot depend on the church to feed our spirit—we need to put in greater effort to sow into our own spiritual walk, to stay connected with God, with the church and with our brethren.

Now, CHC has replaced the balloting system with zone allocation—e-tickets are distributed via pastoral zones within the church, which ensures that every member in a cell group would have the opportunity to attend live service.  I’m looking forward to being physically in church again because being in the house of God is a different experience compared to watching service online. Do I look forward to the day we can hang out in the church in big groups, and take photos without masks on? Yes, definitely! Can’t wait for that!

Finally, I want to say a huge thank you to our leaders, staff and volunteers for making church so vibrant and relatable week in and week out. Truly, there is no place like our spiritual home.

If you are not currently in a cell group but wish to attend CHC’s on-site services, please make a request by completing a form at ticket.chc.org.sg/request. Please note that e-tickets are subject to availability. For all queries on e-ticket matters, please email ticket@chc.org.sg. Harvest Kidz support (for 4 to 12-year-olds) are now available during the Saturday at 5 pm and Sunday 10 am services.

HOW THE BALLOTING SYSTEM WORKS

How does CHC allocate tickets to churchgoers? That was probably the biggest question on the mind of the pastoral team when CHC was to resume its on-site services. After discussing various method, the team decided to explore an electronic balloting system for starters.

“Our concerns were the short turnaround time to develop a reliable system that can handle the balloting process—one that is user-friendly and mobile-friendly at the same time,” explains Chan Kai Kong, CHC’s IT director.

The main goal of the balloting system was to be fair and impartial to every applicant–a maximum of five members was allowed per booking, but the system also had to keep members from submitting more than one ballot. At that point, the system needed to ensure that a successful applicant could only ballot again four weeks later, and it had to put all the unsuccessful applicants on a waiting list. It also had to be flexible to allow for the applicants’ guests.

The system manages applications via a database and the tickets are automatically allocated using an algorithm. After the e-tickets have been issued, the system is also programmed to allow the editing of guest names and cancellation of the e-ticket. It also cater to unique situations such as special seating for those on a wheelchair, and the blocking off of seats for ministry workers before the auto-allocation begins.

“The balloting system was developed in-house while the e-ticketing system was sourced from a vendor, so part of the challenge was to ensure that both systems would work together seamlessly,” Kai Kong reveals.

While some members found the balloting process quick and easy, there were members who were unable to get seats despite trying every week. This was one of the reasons for the switch to zone allocation of seats after the Chinese New Year.

Even with the zone allocation, the balloting system will continue to evolve as there remains a need to issue e-tickets. “The system has also extended its features to allow those who do not belong to any cell group to make requests for e-tickets,” Kai Kong adds.

Another department that has been working tirelessly since the reopening is CHC’s Facilities Department. Besides creating a new layout of the hall and ensuring different entrance and exit points for each section, the Facilities team also doubles up  to ensure that all the churchgoers adhere to the safe-distancing measures set out by the government.

Lim Wee Lee, CHC’s facilities manager notes that the churchgoers were quick to follow the safe-distancing measures and did not create any problems for the team.

“So far, the main issue is understanding how the e-ticket works,” he says. “Many of the churchgoers are using the e-ticket for the first time and they have to toggle between doing the Safe Entry using the Trace Together app, and finding the SMS to activate their e-ticket.”

The task of checking e-tickets is handled by CHC’s security and usher teams, made up of mostly volunteers.