Honor Those Under Our Care: Kong Hee

It is important to those under our leadership, those who are children and those who are broken and needy. Pastor Kong Hee explained why in his last sermon.

“Honor gives us the access to the power of God, to His blessing and His favor,” said Kong Hee, senior pastor of City Harvest Church, as he read from Mark 6:4-6, where Jesus received no honor from His fellow countrymen and therefore could perform no miracles. His message was broadcasted on the weekend of Oct 31 and Nov 1, the third part in his series, “The Spirit of Honor”. Pastor Kong defined honor as “the open celebration of the value and achievement of another person”.

“When we can openly recognize, acknowledge and appreciate who the person is and what he or she has done, we are honoring the person,” he elaborated.

After a quick recap of his previous messages on this theme, Pastor Kong went on to talk about the next three groups of people.

John 13 is the famous chapter where Jesus washed the feet of His disciples. The Bible said in v2 that the “devil having already put it into the heart of Judas Iscariot, Simon’s son, to betray Him”. Following that verse, the Bible said that “Jesus, knowing that the Father had given all things into His hands and that He had come from God and was going to God,” proceeded to wash the disciples’ feet. 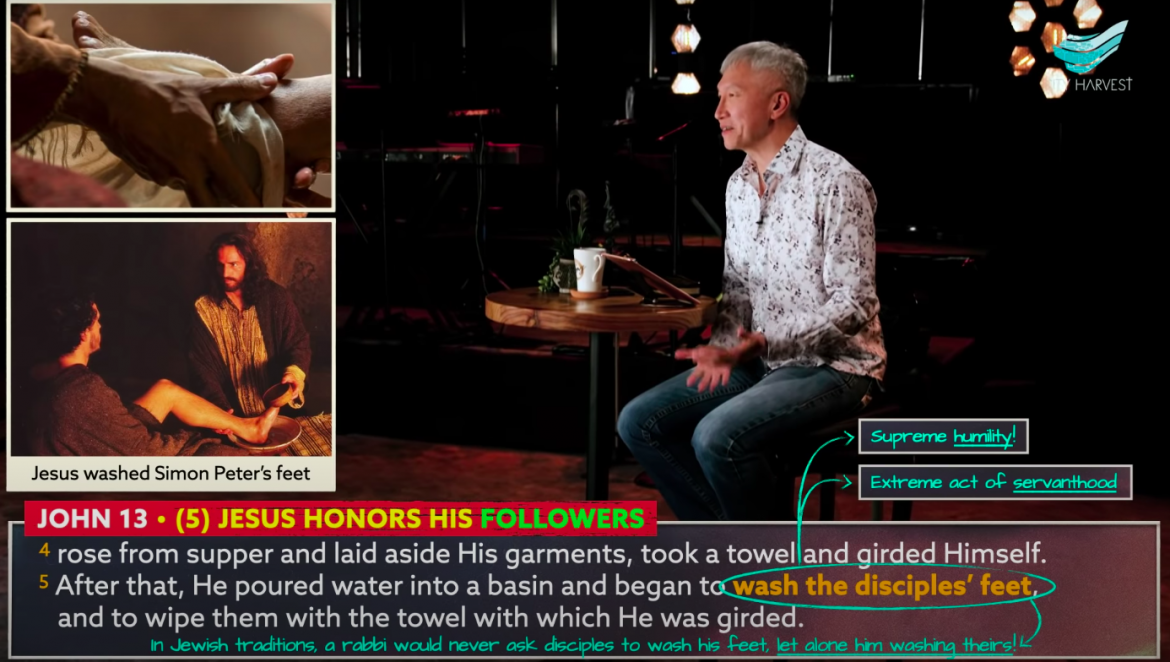 “Only when we are secure in our identity in God—where we came from and where we are going—can we freely celebrate those who will disappoint and hurt us,” the pastor preached.

Pastor Kong then explained that the washing of feet was the job of the most junior servant. In those days, the roads were filthy with dust and animal feces and everyone wore open sandals. When they entered the house, they would be bringing in their dirty, smelly feet. To show honor to his guests, the host traditionally would have his lowliest servant wash the feet of his guests before they sat down for a meal.

Because Jesus and His disciples had booked a private room for the Passover supper, there were no servants around to wash their feet. “But none of the disciples volunteered to wash Jesus’s feet, because no one wanted to feel obligated to wash the feet of all the rest,” the pastor postulated.

Washing Jesus’ feet would not have bothered any of the disciples, but they struggled to serve one another. This struggle can happen in a Christian ministry even today: one may have no problem serving his pastor, but his ego may make it hard for him to serve his peers.

Seeing that no one volunteered, Jesus rose and started going to the disciples one by one to wash their feet. In the Jewish culture, this was an act of extreme humility. It impacted Peter so much, that 30 years later, he would say in his epistle, “be submissive to one another, and be clothed with humility, for ‘God resists the proud, but gives grace to the humble’” (1 Pet 5:5).

Jesus served His disciples with the full knowledge that they would soon betray him and He would be tortured before dying on the cross.

“How do you honor those whom you know are hating you, betraying you, or are soon to be disloyal to you?” Pastor Kong asked. Jesus promised that when His believers love and honor others in their worst situation, they are serving God and His reward for them is great (Lk 6:35).

Reading Ephesians 6:8, Pastor Kong emphasized, “When we honor others with our attitude and kindness, God will honor us in the same way.” Reading v9, the pastor implored the church not to lead with anger and not to threaten those under their care, including their domestic helpers. “When there’s respect, people are happier and they perform better,” the pastor pointed out. The attitude and spirit of honor must be something one carries with him all the time. Jesus constantly honored his disciples as he defended them when they were criticized by the Pharisees. He freely gave them His power and authority, letting them share in His vision and mission. By honoring them, He poured courage into them.

“We must do the same for our subordinates,” stated Pastor Kong. “When we tell them that they can do it, we pour faith into them. Then they will start believing in God and in themselves. Ordinary people are then transformed into extraordinary ones.”

In Mark 10:13, some parents brought their children to be blessed by Jesus and the disciples rebuked them. Little children are usually sensitive to strangers, the pastor noted, and if they were comfortable around Jesus, it showed that Jesus was a very friendly person. In those days, children were considered a nuisance and of low status in society, which would explain why the disciples were irritated by these children rushing to Jesus in the midst of His busy evangelistic campaign.

But Jesus was “greatly displeased” (Mk 10:14). “When we don’t show honor to kids, God in heaven gets upset. God expects us to be good stewards of little lives,” the pastor preached. Children instinctively look to their parents for love and protection. Their hearts are always wide open. “God doesn’t want us to ever crush them,” Pastor Kong exhorted. Paul taught in Ephesians 6:4, to not “frustrate our kids to a point of making them feel hopeless and exasperated about themselves and about life.”

Jesus gave the children His undivided attention. “Every child needs positive attention so that they know they are valued and that they are capable of bringing pleasure to others. This is how their self-image is built up over time,” said the pastor.

Moreover, Jesus welcomes little children as full members of God’s Kingdom. While they may not be as intellectually mature as adults, they have the capacity to believe, to trust and to learn. Pastor Kong added, “We can learn simple faith, simple humility and openness of heart from the children.”

“Parents, you must encourage your children by openly affirming their worth and celebrating their value. Tell your sons and daughters every day—no matter how old they are—how proud you are of them, how blessed and privileged you are to be their parents.”

JESUS HONORS THE FALLEN, THE BROKEN AND THE NEEDY

“Jesus will not condone your sin or unrighteousness,” the pastor began, “but He was always patient and kind to sinners. Even if they aren’t the children of God, He celebrated their value as people created in God’s image.”

Reading the story of the adulterous woman in John 8, Pastor Kong showed how Jesus honored her even though she had committed a serious sin. The Bible recorded that Jesus did not react to the criticism of the religious leaders. “When we honor our friends, we don’t join in gossip against them,” the pastor pointed out. 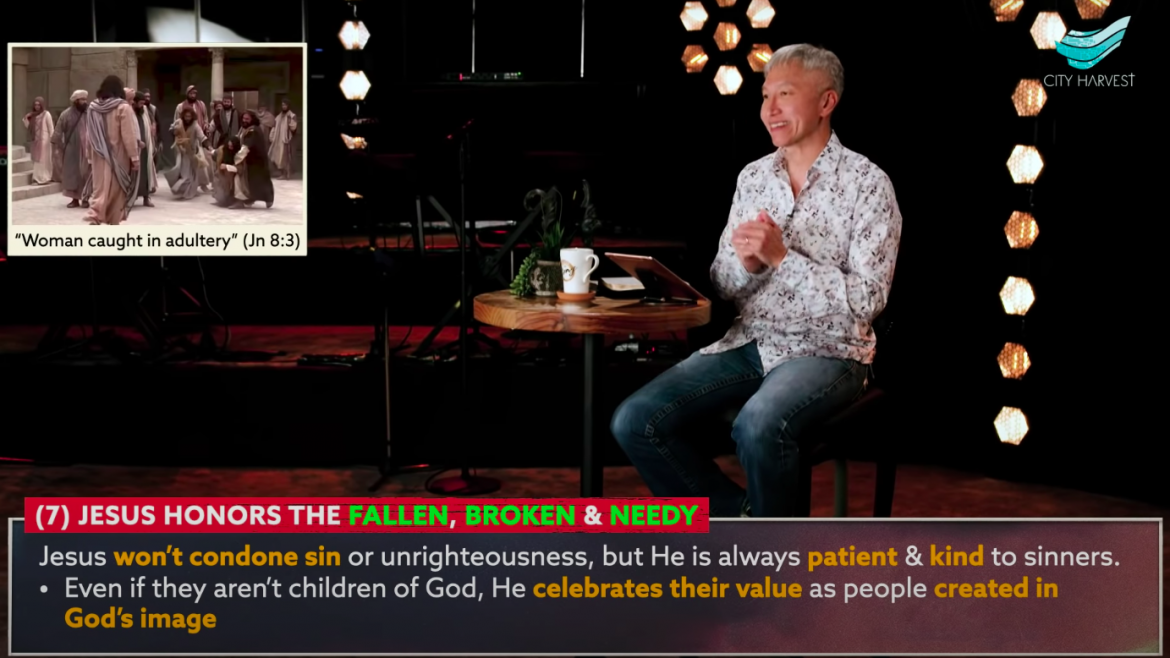 Instead of reacting in anger when the woman was brought to Him, Jesus stooped to the ground, an act of identifying Himself with her. “When we identify with those who are ashamed, we ease their embarrassment,” the pastor said. Jesus did not exercise His right to condemn the woman, He forgave her instead, modelling for His disciples the truth of “there is therefore now no condemnation to those who are in Christ Jesus” (Rom 8:1).

Yet Jesus didn’t just gloss over her sin as if she had done no wrong. Pastor Kong said, “Jesus told her that she needed to repent, to have a change of heart, resulting in a change of action.”

By saying asking her to “go and sin no more” (Jn 8:11), Jesus gave her hope to be truly free from sexual sin. Pastor Kong imagined that she would need to face further condemnation by her family and neighbors, but Jesus is saying to her, “You are now a child of God, you have been forgiven, and you will be free from the bondage of sin.”

Like Jesus, Christians need to move in the power of forgiveness. Pastor Kong taught the church not to cut ties with those who had fallen from grace, but instead, to stoop down with them to ease their embarrassment. If there is a need for correction, do it in private just as Jesus did.

“Very often, it’s going to be a long journey to recovery and restoration. But keep giving them hope because we know one thing, that God will give them beauty for ashes, the oil of joy for mourning and the garment of praise for their spirit of heaviness.” In closing, Pastor Kong emphasized that, in the four Gospels, Jesus was always found honoring the fallen, the broken, the weak, the poor, and the needy by praying for them and healing them.

“Jesus taught us an important lesson here: we don’t just show respect to the rich and famous, the successful and accomplished. It is easy to honor those who are already honorable, but we really move in the spirit of honor when we can prefer the weaker, the slow, those less capable than us, and those under our leadership.”