In a very special graduation commencement for School of Theology’s Class of 2020, Pastor Kong Hee gave an encouraging message on not losing the joy that one has in Jesus.

City Harvest Church’s School of Theology graduated its 26th cohort on the weekend of Sep 26 and 27, with five services over two days. The services were held at CHC’s Jurong West location. This year’s graduation service was, like many things this year, the first of its kind. For a start, it was the first physical service CHC had held since the start of the pandemic (which had caused all physical church activities, including its worship services, to come to a halt in March this year).

The service started off with executive pastor and principal of SOT, Bobby Chaw addressing the cohort. He commended them on their perseverance and grit amidst the challenges and frustrations they had faced doing school during the pandemic, and he encouraged them not to give up. Quoting the theme of this year’s graduation service, the pastor praised the cohort: “Against all odds, you chose to persevere.” A video montage of students recounting the challenges they faced during the seven months of SOT played on the LED screen after Pastor Bobby’s word. The students also gave testimony about the goodness of God during their school year, and spoke of how He saw them through each difficulty.

Due to COVID-19 measures that prevented live singing or performances, there was no praise and worship, but that didn’t stop the graduating students from worshipping God with SOT’s iconic anthem “In Christ Alone”. As the song was played, the graduating students, as well as the SOT and pastoral staff, stood up and worshiped quietly in their hearts. An atmosphere of faith and surrender filled the entire hall. 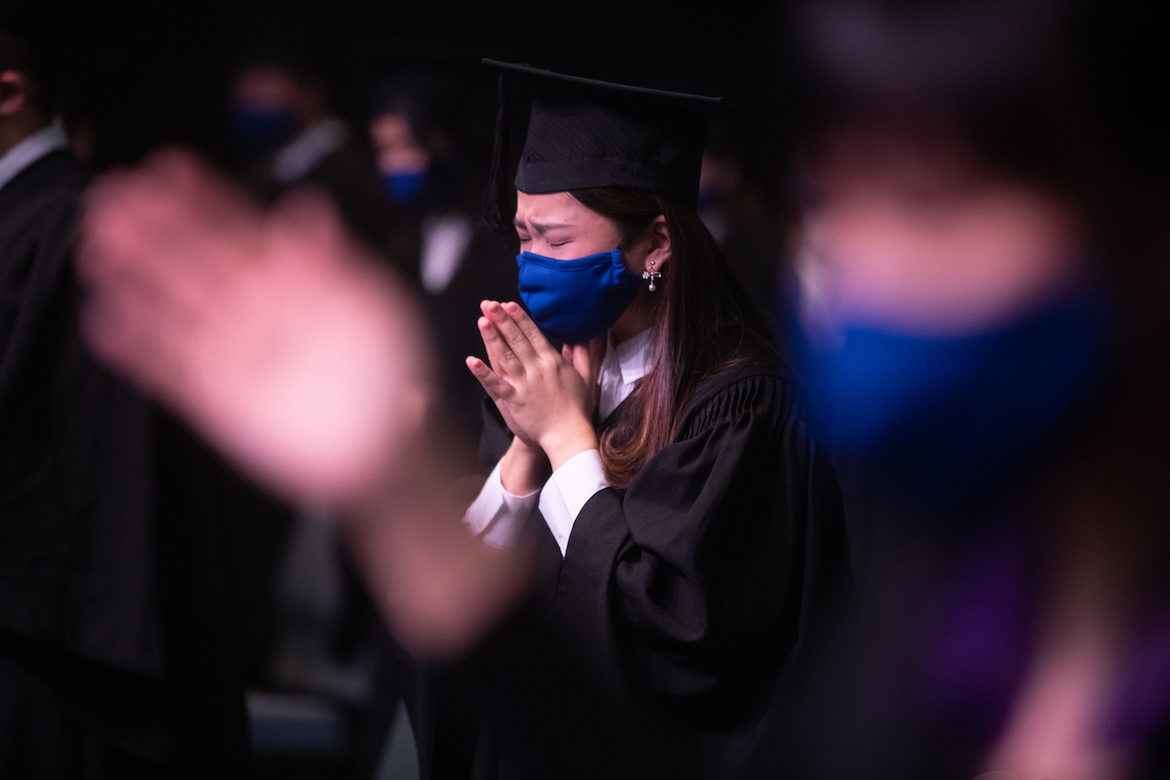 This year’s rendition of “In Christ Alone” was a video compilation of the whole class of 2020 worshipping their hearts out to the song. It was translated and sung in eight different languages—English, Mandarin, Tagalog, Bahasa Indonesia, Thai, Burmese, Japanese, and Malayalam—showcasing the various nationalities represented in this year’s cohort.

GOD CAME THROUGH FOR EACH OF THEM

The five different services also allowed for two different student preachers to deliver a sermon, and three different pairs of students to share their testimonies during their designated services. 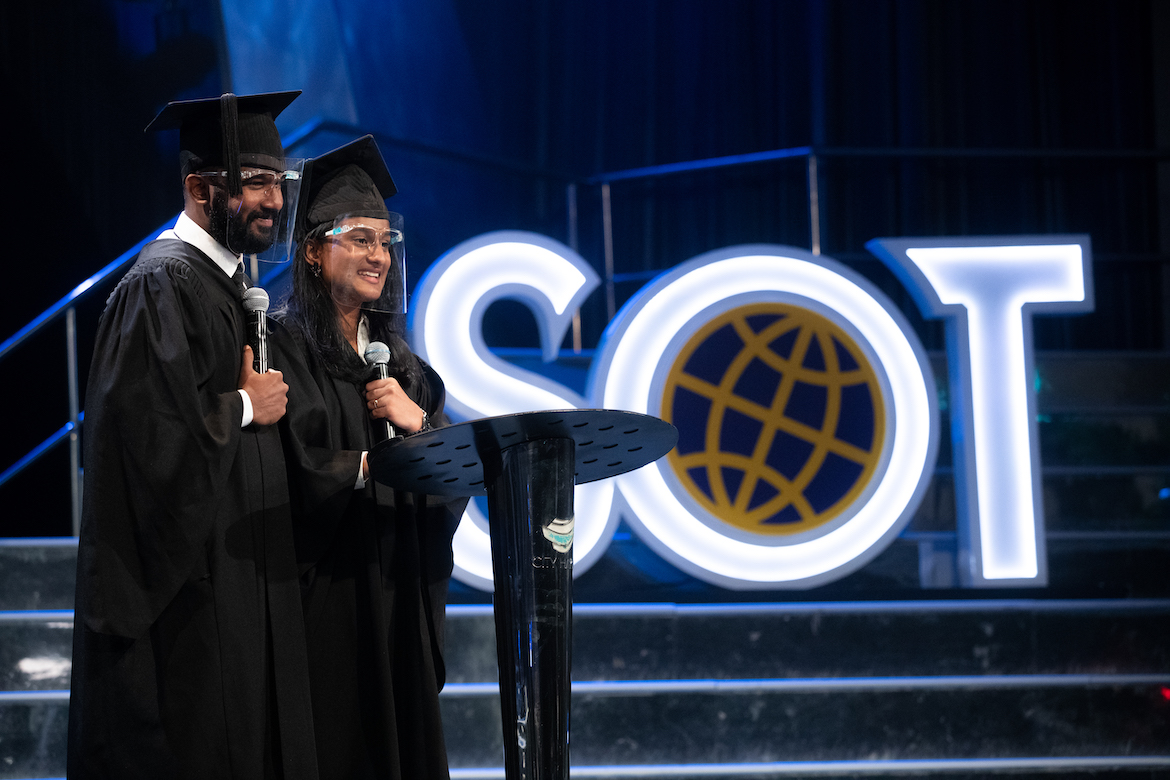 On Saturday, Noronha Joash Danne and his wife, Sebastian Qoheletha Allelu—everyone called her Coco—shared their faith journey, chronicling how they came to SOT and the struggles they endured while attending school online during the lockdown. Eventually, the couple saw the benefits of the online lessons and were able to apply what they learned in CHC to help their church back home in Kerala, India to adjust to life in the pandemic. 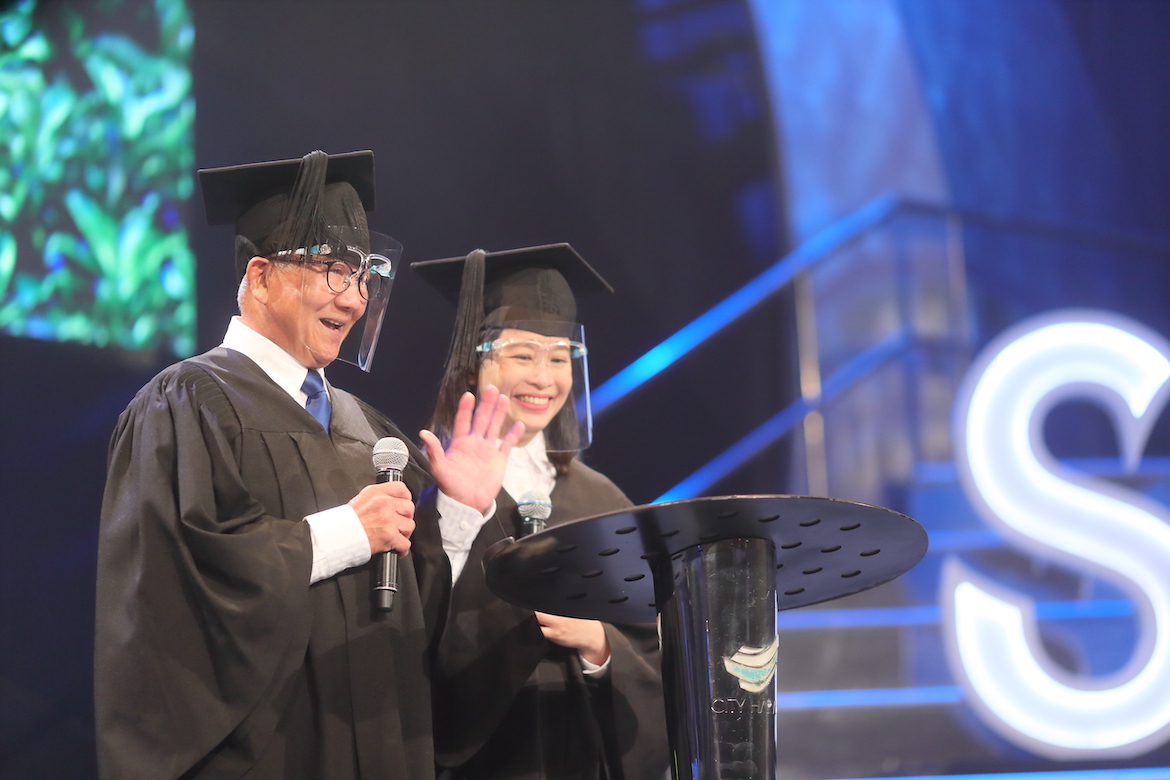 Student preacher Gracie Lepcha preached on the life of David and encourage her fellow SOT students to “wait upon the Lord just as David did, for in the waiting we find our victorious identity”. She also candidly shared her own testimony of how waiting upon the Lord had brought her victory. 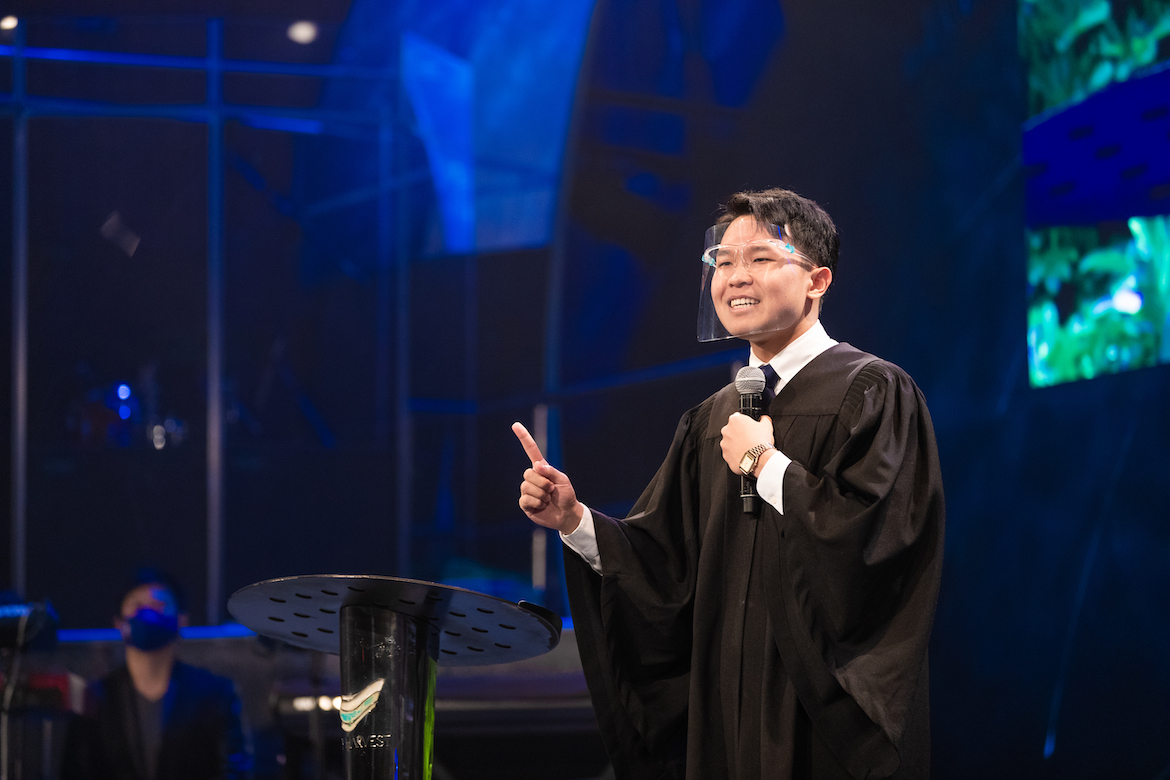 On Sunday, Joshua Lau preached a Mandarin message titled “Walking Into The Unknown”. In the Bible, Joshua had to overcome his fear of the unknown when he had to lead the Israelites into the Promised Land. Similarly, everyone living in the pandemic has no idea what the future will bring. But God told Joshua two things: to use His Words as his guide and to be bold and courageous because God was with him. The student preacher encouraged the students to walk into the future with boldness and courage because God will bring all His promises in their lives to pass. Lim Dian Rong and her mother, Serene were the last to share their testimonies on stage. They recounted their days in SOT, not as parent and child but as classmates, and how studying the Word helped them grow deeper in their understanding of God. Dian Rong shared that she has learned to bring her thoughts captive to Christ, and not let her mind wander, while Serene learned to overcome the devil and to lean upon God for strength.

THE JOY OF THE LORD

He started his sermon with his experience during his time in prison, when he came to the realization that joy does not equate happiness, and that Jesus was always full of joy.

“He prayed that His disciples would experience the joy He had in His heart,” noted the pastor. 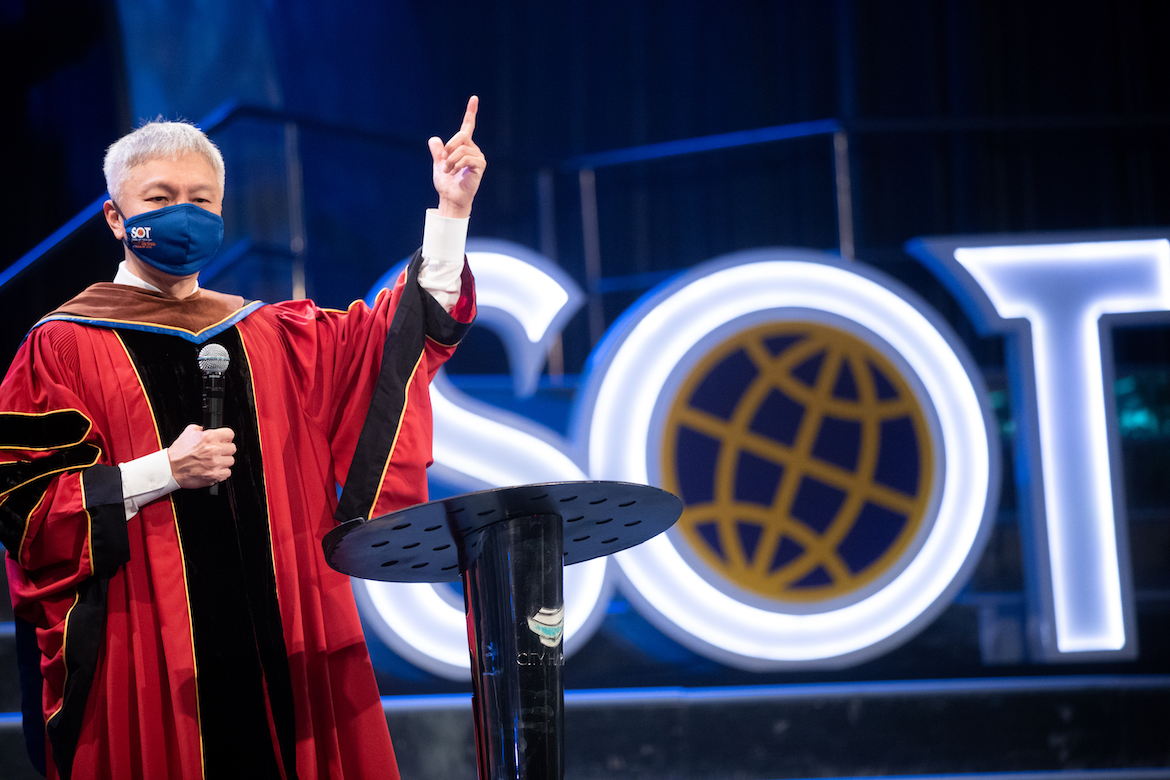 He emphasized that while happiness is determined by what is on the outside, the joy that is in a person does not fluctuate. The pastor shared a quote by author and theologian CS Lewis that enthralled him: “In heaven, the highest raptures of earth lovers will be as milk and water compared with the delights of knowing God.”

“This is the joy Jesus is praying, that we, His disciples, can experience every single day as we live for Him,” Pastor Kong explained.

He concluded with a prayer of blessing over the Class of 2020 and encouraged the graduates with the assurance that when they have the joy of Jesus in their lives, life will be fulfilling and satisfying. 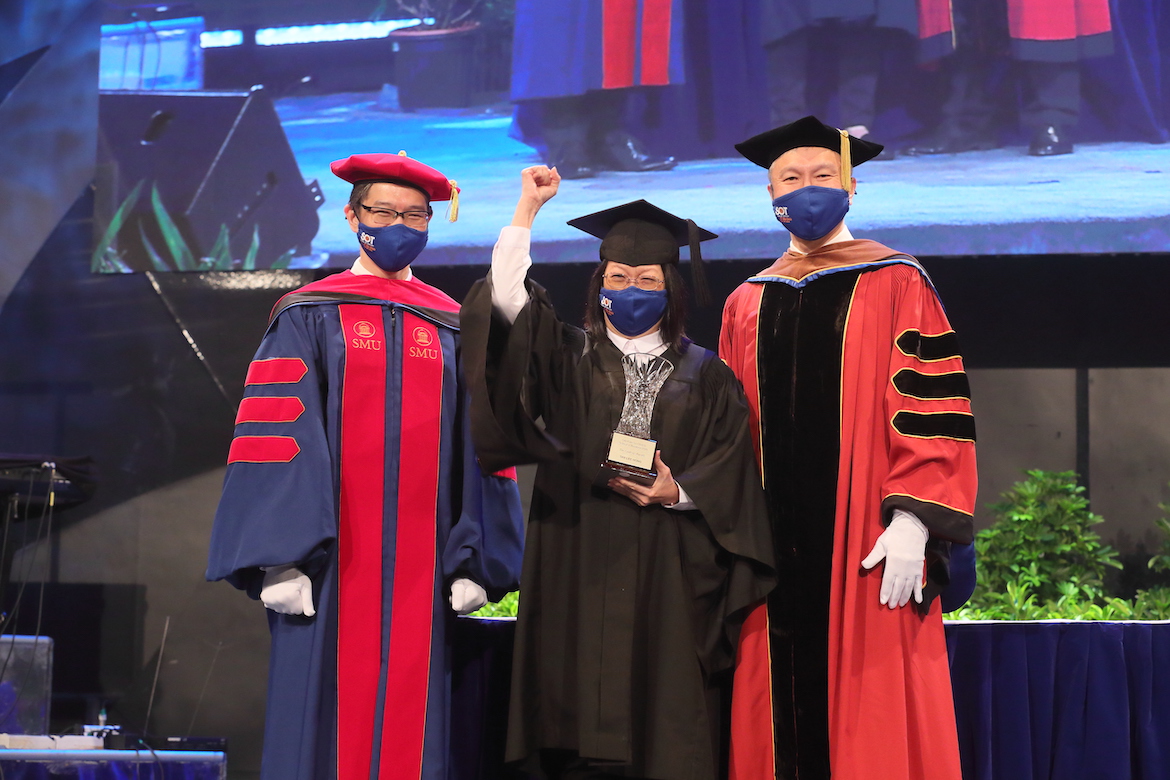 The last segment of the service saw the recipients of The Courage Award going on stage to receive their award. The award was presented to a different student during each service, acknowledging their particularly difficult journey during the course. These students faced challenges that went beyond what they expected but each one pushed through to complete their SOT journey, against all odds.

The service ended with the students joyously tossing their mortar boards, as well as a special photo-taking session. The first and fourth level at the CHC building in Jurong West were transformed into a huge photo space to account for safe distancing, allowing happy graduates to capture their memories, celebrating the end of seven unique and memorable months.