Children’s Day 2020: Aloha To A Fresh Way Of Outreach

COVID can’t stop Harvest Kidz’s biggest annual party to mark Children’s Day. What’s not to love about a party that has games, prizes, and Bible stories—even if it all happened on Zoom. 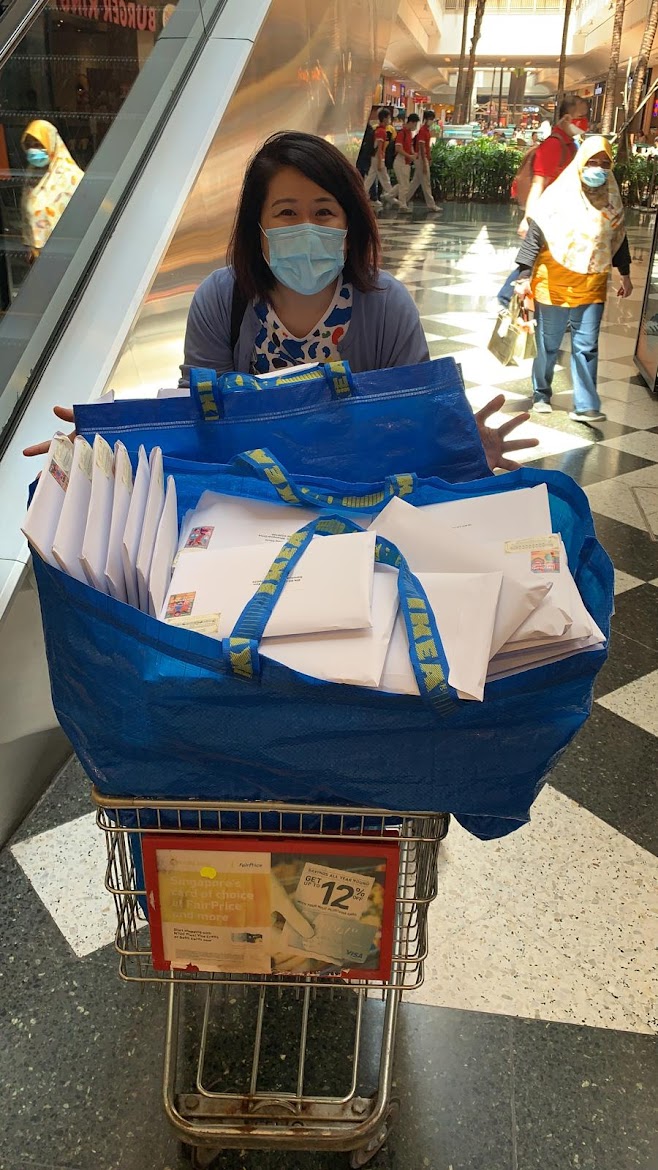 Excited were my two children when they saw that two envelopes addressed to them had arrived in the mail.

Ripping the envelopes open, they found a mask cover and a card in each. The card was no ordinary card—it was an invitation to Harvest Kidz’s Aloha! Zoom party. It also served as the key to participating in the #hkzalohachallenge2020.

Traditionally, Harvest Kidz organizes a big party every Children’s Day. A big celebration appeared to be impossible this year, given the pandemic, but Pastor Eileen Toh, who oversees City Harvest Church’s children’s ministry, came up with the idea of having a big Zoom party instead.

“It started out as a celebration party for our own Harvest Kidz members,” said Pastor Eileen,” “but word got around and friends of our kids became interested. Some of the parents in our church also invited their friends’ kids to join us.”

GETTING INTO SPIRIT OF ALOHA
To create hype and excitement among the children, the Harvest Kidz workers got to work and came up with two challenges that would precede the Aloha Party.

The first was the Aloha Challenge. Every child was sent one of five letters–A, L, O, or H–and they had to find other children with the other letters and form the word “ALOHA”. Once they completed this part, they—or more accurately, their parents—had to create a photo collage of all five kids holding up their letters and post it on Instagram, with the hashtag #hkzalohachallenge2020. The top 10 collages won a prize each—and at this point I must proudly announce that my son was one of the winners. 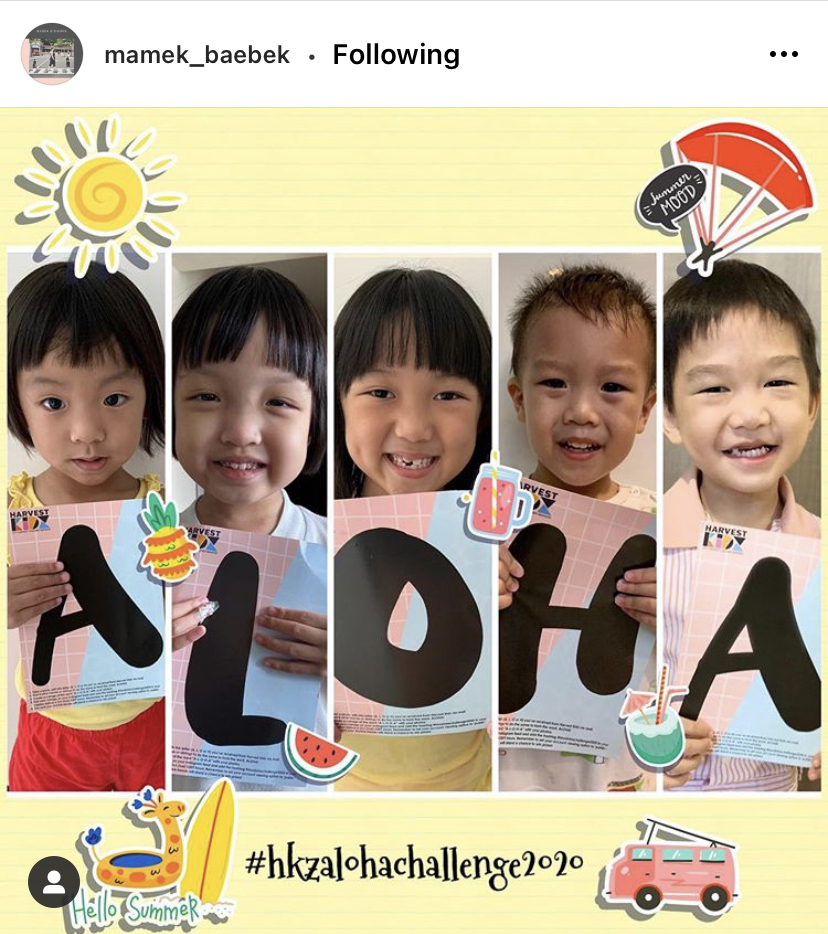 “I wanted a challenge that would get the kids and parents to talk to other kids and parents,” explained Pastor Eileen. “COVID-19 has caused many people to stay home for way too long, and they have started to become inward-looking. I wanted the challenge to be a way to bring them together and have something to talk about. The result was sensational. Hundreds and hundreds of families took part in this.”

Hunting for the other four kids with the right letters was no easy feat. Once my sons received their letters, I started texting my mummy friends to find a match for my two boys. Many of them had received their letters before we did, and had already started their search. It took a whole week before we found two sets of kids to form ALOHA twice over. But Pastor Eileen’s plan worked: we all had fun texting each other, piecing the photos into a collage, and laughing at our own enthusiasm.

Running concurrently was the Aloha Dress Up Competition. Many mommies, and maybe even some daddies—but not me, I’m not much of a fashionista—put in great effort into putting together outfits worthy to star in Moana. It was kawaii Hawaii all over Instagram if you follow enough parents of Harvest Kidz. The little ones looked extra cute decked out in colorful Hawaiian shirts featuring palm trees and pineapples, complete with sun hats, shades, and even ukuleles. Many parents put in extra effort to make straw hula skirts for their girls and garlands for the boys.

“It was really the support of the parents that made the event successful,” Pastor Eileen said. “So thank you, Mommies and Daddies! When Children’s Day weekend arrived, my boys were eagerly sitting in front of the laptop waiting for “the host will let you in”. It amazes me that Harvest Kidz was able to bring that Big Day atmosphere right into my living room. My boys cheered during games, worshiped with the teachers, marvelled at the magic show, and yelled their number repeatedly during the blessing dip. At the Friday party, the children were entertained by a comedian called Mr Funny!

As always, the central element of every Harvest Kidz service is the Word. The Bible lesson centred on God’s salvation that is available to all. Featuring “divers” looking for treasure, the lesson was so fun and captivating, that my boys didn’t need reminding to sit still and pay attention.

EXCEEDINGLY, ABUNDANTLY MORE THAN IMAGINED
“I really thank God for the newcomers who joined us,” Pastor Eileen said. “We had families and kids inviting their friends and other families to join the Zoom services. We didn’t intend it to be evangelistic, as there was no way to do physical outreaches, and we could only visit a limited number of families. We only relied on social media and word of mouth by CHC members.” 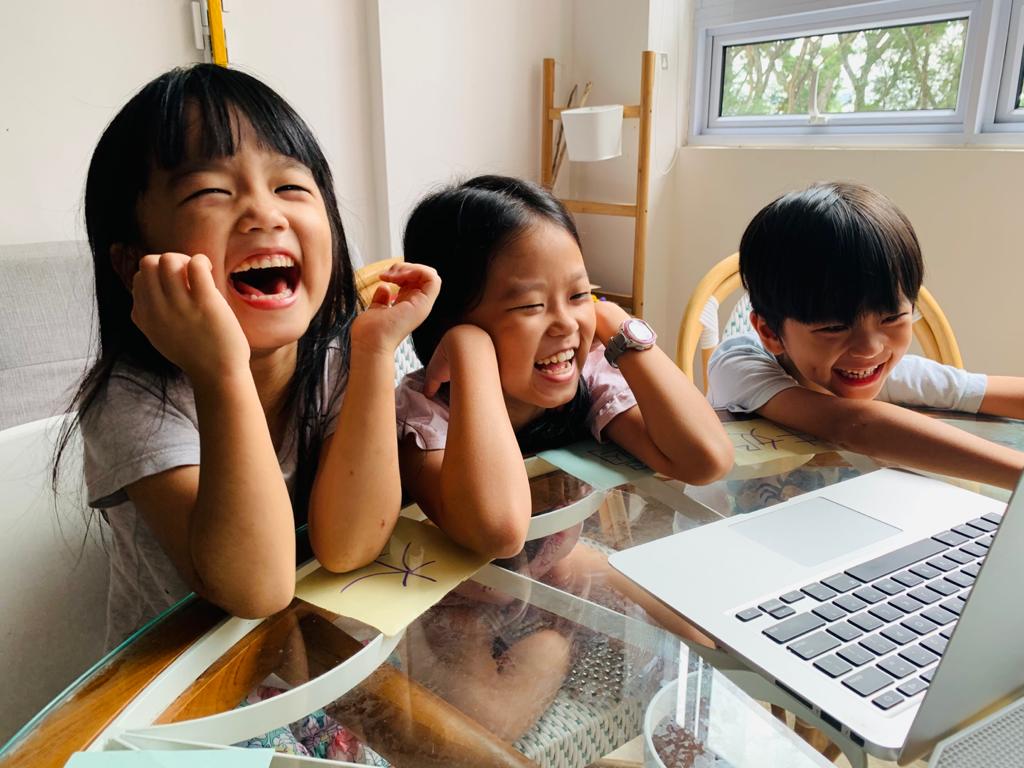 Edric Sng’s children enjoying the Aloha Party at the invitation of a classmate. PHOTO: EDRIC SNG

During the Friday party, Edric Sng, deputy senior pastor at Bethesda Bedok Tampines Church, sent us a photo of his children with this message: “Just some very positive feedback and encouragement for your kids teams—my kids were invited by a classmate to the Aloha Children’s Day Zoom event and they’re really loving it!”

There were two Zoom sessions held on Oct 9 and 10. “The Saturday 11am session saw over 700 children and their parents logging on to the Zoom session. It was amazing to see 15 screens of participants in the gallery view for just one event! We could see more than one child in each participant’s thumbnail as siblings and even whole families were gathered together to attend the Children’s Day zoom service,” she added.

“The amazing part was that technology did not limit the kids from having fun, being engaged to the Bible lesson, and responding to the altar call.”

Neither did technology limit the power of God. When Pastor Eileen gave the altar call, my eyes started to well up with tears. The presence of God filled my living room and I believed He was touching many hearts in other homes as well. At the end of the two services, 629 children and two adults had given their hearts to God. 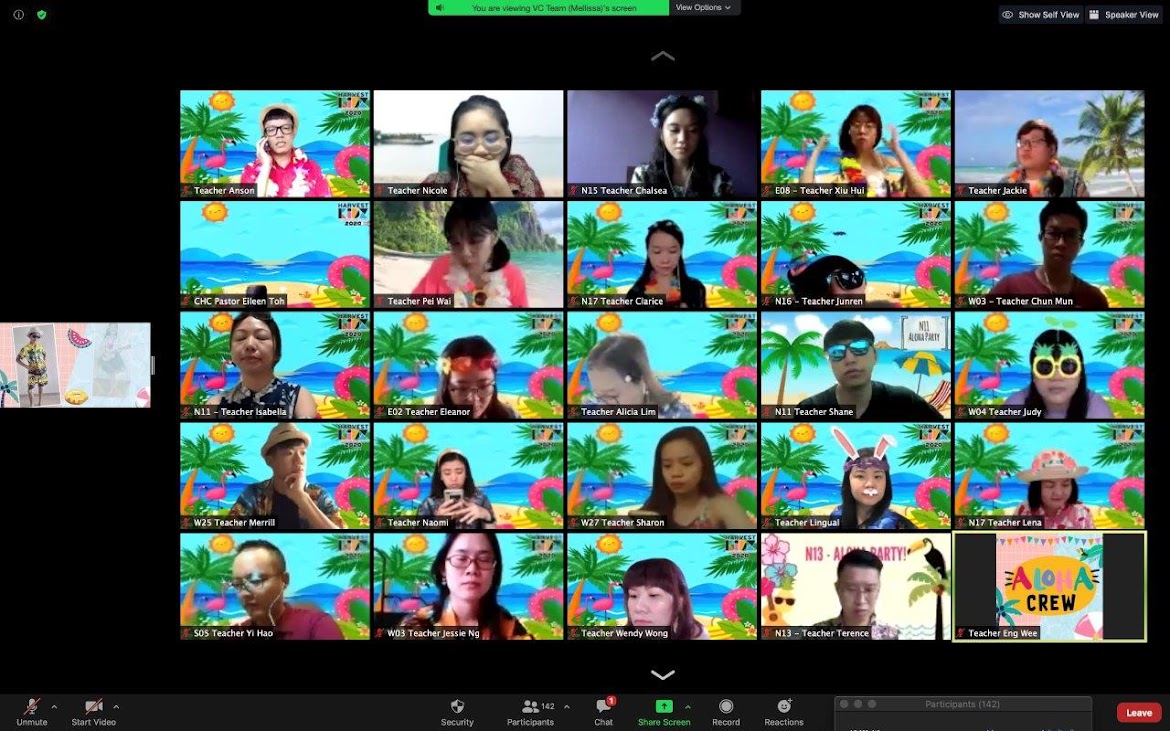 Besides the Aloha Party on Zoom, the Harvest Kidz team was also invited to do a school outreach. The team conducted four sessions with safety measures put in by the school, reaching 231 students.

In all, the Harvest Kidz team presented the salvation story to 3,153 children during this season.

KUDOS TO THE HARVEST KIDZ TEAM
Behind the scenes of the amazing party was the hard work of the Harvest Kidz team. Four weeks before Children’s Day, the ministry workers and volunteers had already started work, buying, pack, and sending out nearly 2,600 gift packs containing a mask cover and invitation card.

“On top of our weekly Bible lessons, we had to allocate extra time to film the Bible lesson for the Aloha Party. We even filmed Connie Yong, one of our pastoral staffers ‘diving in the sea’ against a green screen. It was hard work! But we really wanted our kids to be captivated by the lessons.” 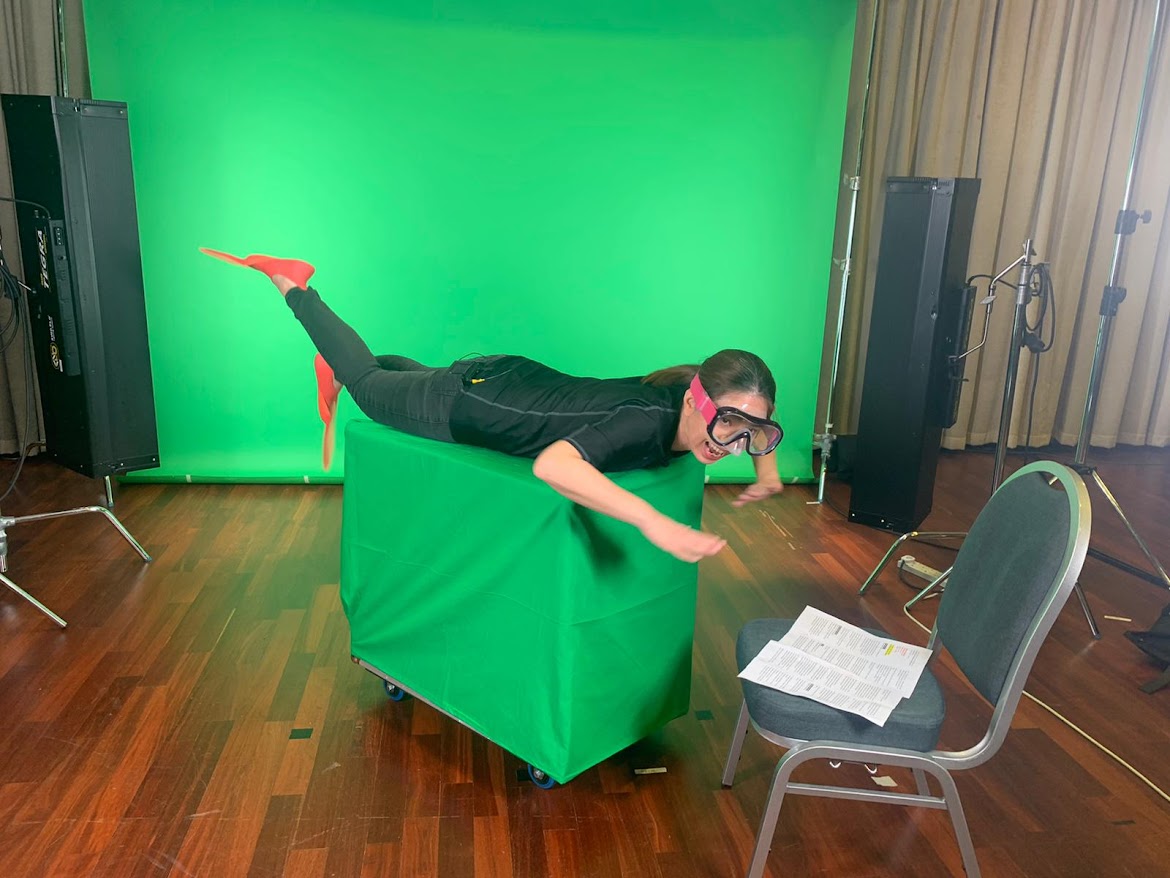 Most importantly, the workers had to prepare themselves spiritually. Pastor Eileen shared, “Three weeks before Children’s Day, the Harvest Kidz team had an online prayer meeting to prepare for the event. Over 200 volunteers attended. We also had a 10-day prayer and fasting challenge to prepare everyone to pray for every child who would attend.”

The pastor also shared that for a normal Big Day event in the church, the team only had to focus on one program, but when the party went online, they found themselves planning a whole series of programs for Instagram, Facebook and YouTube. Though this was new territory for the team, but they ploughed through with their eye on the prize: to bless the children in the midst of the pandemic.

“Nothing can stop the fire of evangelism from spreading if we are willing and open to new ways,” said Pastor Eileen. “God will always make a way even in a season like this and He will move through us!

“In this season, I have become more creative than ever before,” she added. “As I rely on the Holy Spirit, I find that He reveals to me and my team more and more creative ways to bless the children.”