The Victory Of Christ

What does it really mean when the Bible says Christians have “the victory of Christ”? City Harvest Church’s senior pastor Kong Hee wrote this piece, which was featured in the Summer 2020 edition of Church Growth International magazine. 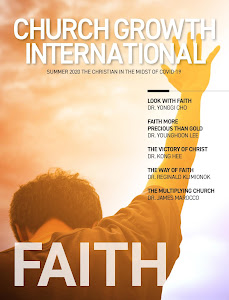 Church Growth International is an international institute founded in November 1976 by Dr David Yonggi Cho of Yoido Full Gospel Church in Seoul, Korea. The purpose of CGI is to promote growth in church all over the world, and the organisation is made up of Christian pastors and leaders from many nations. The board of CGI consists of 63 pastors and doctors of church growth from over 25 countries.

CGI hosts an annual conference, alternating between Seoul and a major city of the world. It also publishes church growth-related books, and the English-language magazine Church Growth International, which has 18,000 subscribers from 181 countries and is now available online.

In the current issue of Church Growth International (Summer 2020) Pastor Kong Hee wrote two articles—the first on The Victory of Christ, and the second a special piece about COVID-19. City News reproduces them here with permission from CGI.

THE VICTORY OF CHRIST 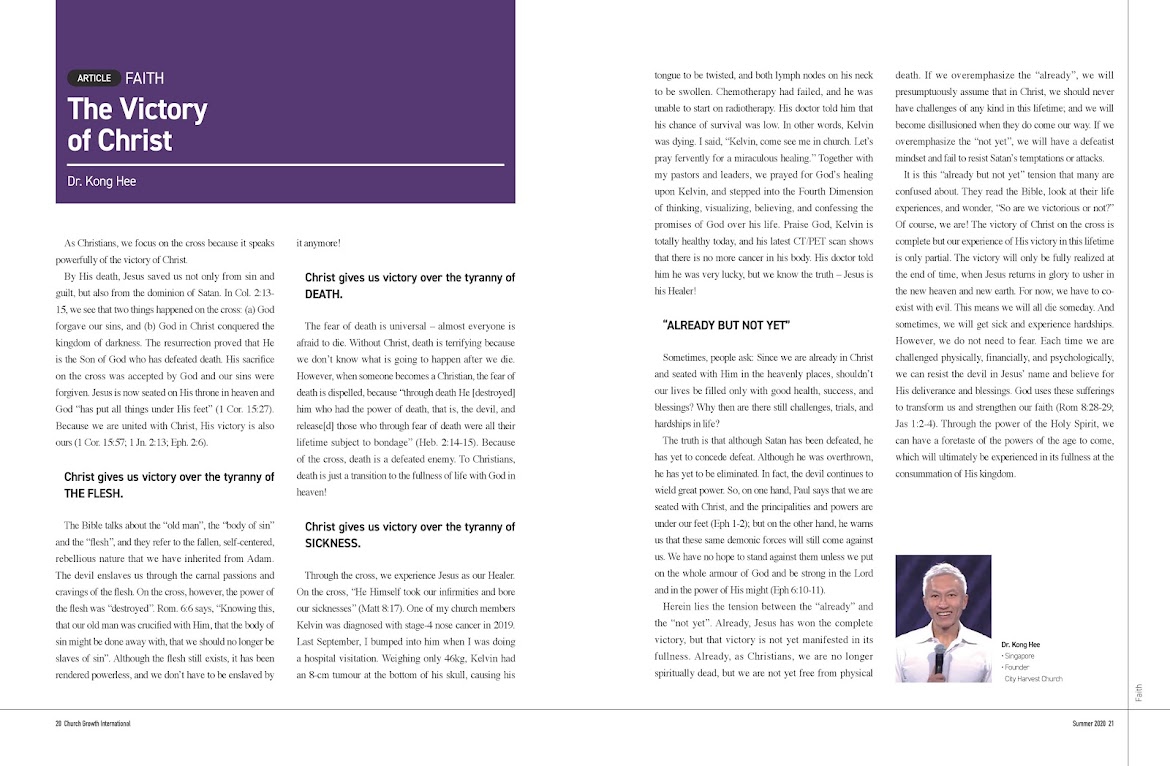 As Christians, we focus on the cross because it speaks powerfully of the victory of Christ.

By His death, Jesus saved us not only from sin and guilt, but also from the dominion of Satan. In Col 2:13-15, we see that two things happened on the cross: (a) God forgave our sins, and (b) God in Christ conquered the kingdom of darkenss. The resurrection proved that He is the Son of God who has defeated death. His sacrifice on the cross was accepted by God and our sins were forgiven. Jesus is now seated on His throne in heaven and God “has put all things under His feet” (1 Cor 15:27). Because we are united with Christ, His victory is also ours (1 Cor 15:57; 1 Jn 2:13; Eph 2:6).

Christ gives us victory over the tyranny of THE FLESH.
The Bible talks about the “old man”, the “body of sin” and the “flesh”, and they refer to the fallen, self-centered, rebellious nature that we have inherited from Adam. The devil enslaves us through the  carnal passions and cravings of the flesh. On the cross, however, the power of the flesh was “destroyed”. Rom 6:6 says, “Knowing this, that our old man was crucified with Him, that the body of sin might be done away with, that we should no longer be slaves of sin”. Although the flesh still exists, it has been rendered powerless, and we don’t have to be enslaved by it anymore!

Christ gives us victory over the tyranny of DEATH.
The fear of death is universal — almost everyone is afraid to die. Without Christ, death is terrifying because we don’t know what is going to happen after we die. However, when someone becomes a Christian, the fear of death is dispelled, because “through death He [destroyed] him who had the power of death, that is, the devil, and release[d] those who through fear of death were all their lifetime subject to bondage” (Heb 2:14-15). Because of the cross, death is a defeated enemy. To Christians, death is just a transition to the fullness of life with God in heaven!

Christ gives us victory over the tyranny of SICKNESS.
Through the cross, we experience Jesus as our Healer. On the cross, “He himself took our infirmities and bore our sicknesses” (Matt 8:17). One of my church members Kelvin was diagnosed with stage-4 nose cancer in 2019. Last September, I bumped into him when I was doing a hospital visitation. Weighing only 46kg, Kelvin had an 8-cm tumour at the bottom of his skull, causing his tongue to be twisted, and both lympth nodes on his neck to be swollen. Chemotherapy had failed, and he was unable to start on radiotherapy. His doctor told him that his chance of survival was low. In other words, Kelvin was dying. I said, “Kelvin, come see me in church. Let’s pray fervently for a miraculous healing.” Together with my pastors and leaders, we prayed for God’s healing upon Kelvin, and stepped into the Fourth Dimension of thinking, visualizing, believing and confessing the promises of God over his life. Praise God, Kelvin is totally healthy today, and his latest CT/PET scan shows that there is no more cancer in his body. His doctor told him he was very lucky, but we know the truth—Jesus is his Healer!

“ALREADY BUT NOT YET”
Sometimes, people ask: Since we already in Christ and seated with Him in the heavenly places, shouldn’t our lives be filled only with good health, success and blessings? Why then are there still challenges, trials and hardships in life?

The truth is that although Satan has been defeated, he has yet to concede defeat. Although he was overthrown, he has yet to be eliminated. In fact, the devil continues to wield great power. So, on one hand, Paul says that we are seated with Christ, and the principalities and powers are under our feet (Eph 1-2); but on the other hands, he warns us that these same demonic forces will still come against us. We have no hope to stand against them unless we put on the whole armour of God and be strong in the Lrod and in the power of His might (Eph 6:10-11).

Herein lies the tension between the “already” and the “not yet”. Already, Jesus has won the complete victory, but that victory is not yet manifested in its fullness. Already, as Christians, we are no longer spiritually dead, but we are not yet free from physical death. If we over-emphasize the “already”, we will presumptuously assume that in Christ, we should never have challenges of any kind in this lifetime; and we will become disillusioned when they do come our way. If we over-emphasize the “not yet”, we will have a defeatist mindset and fail to resist Satan’s temptations or attacks.

It is this “already but not yet” tension that many are confused about. They read the Bible, look at their life experiences and wonder, “So are we victorious or not?” Of course, we are! The victory of Christ on the cross is complete, but our experience of His victory in this lifetime is only partial. The victory will only be fully realized at the end of time, when Jesus returns in glory to usher in the new heaven and new earth. For now, we will have to co-exist with evil. This means we will all die someday. And sometimes, we will get sick and experience hardships. However, we do not need to fear. Each time we are challenged physically, financially and psychologically, we can resist the devil in Jesus’ name and believe for His deliverance and blessings. God uses these sufferings to transform us and strengthen our faith (Rom 8:28-29, Jas 1:2-4). Through the power of the Holy Spirit, we can have a foretaste of the powers of the age to come, which will ultimately be experienced in its fullness at the consummation of His kingdom.

God is in Control “These things I have spoken to you, that in Me you may have peace. In the world, you will have tribulation; but be of good cheer, I have overcome the world.” (Jn 16:33)

When 2020 started, no one would have imagined that the COVID-19 pandemic would escalate to such global proportions and greatly affect the way we live. COVID-19 has brought along a lot of uncertainty—it almost seems like there is no light at the end of the tunnel.

Jesus clearly says that we will have tribulation in this world. As Christians, however, we should not feel hopeless. In Christ, we can have an inner peace even as we go through this pandemic. How we posture ourselves in this time is important. If we adopt a posture of faith, living and walking with the Holy Spirit in the Fourth Dimension, our perspectives will align with God’s Word. We will be of good cheer because we are fully convinced that Jesus has overcome the world.

Notwithstanding the social distancing measures, our members have become closer during this period. We started a Care Fun to help those who have lost their jobs or are struggling because of the economic fallout. Our members are also meeting on social media platforms every day, to encourage one another and to reach out to those who are feeling hopeless.

As Christians, we have the confidence that God is in control of every situation. Let us not swing to either extremes of succumbing to fear or being reckless in our faith. Rather, let us continue to live by faith, and seek to love each other with the love of God. As we share the gospel and help others in need, we can be assured that Jesus is with us.

It Is The Love Of The Holy Spirit...